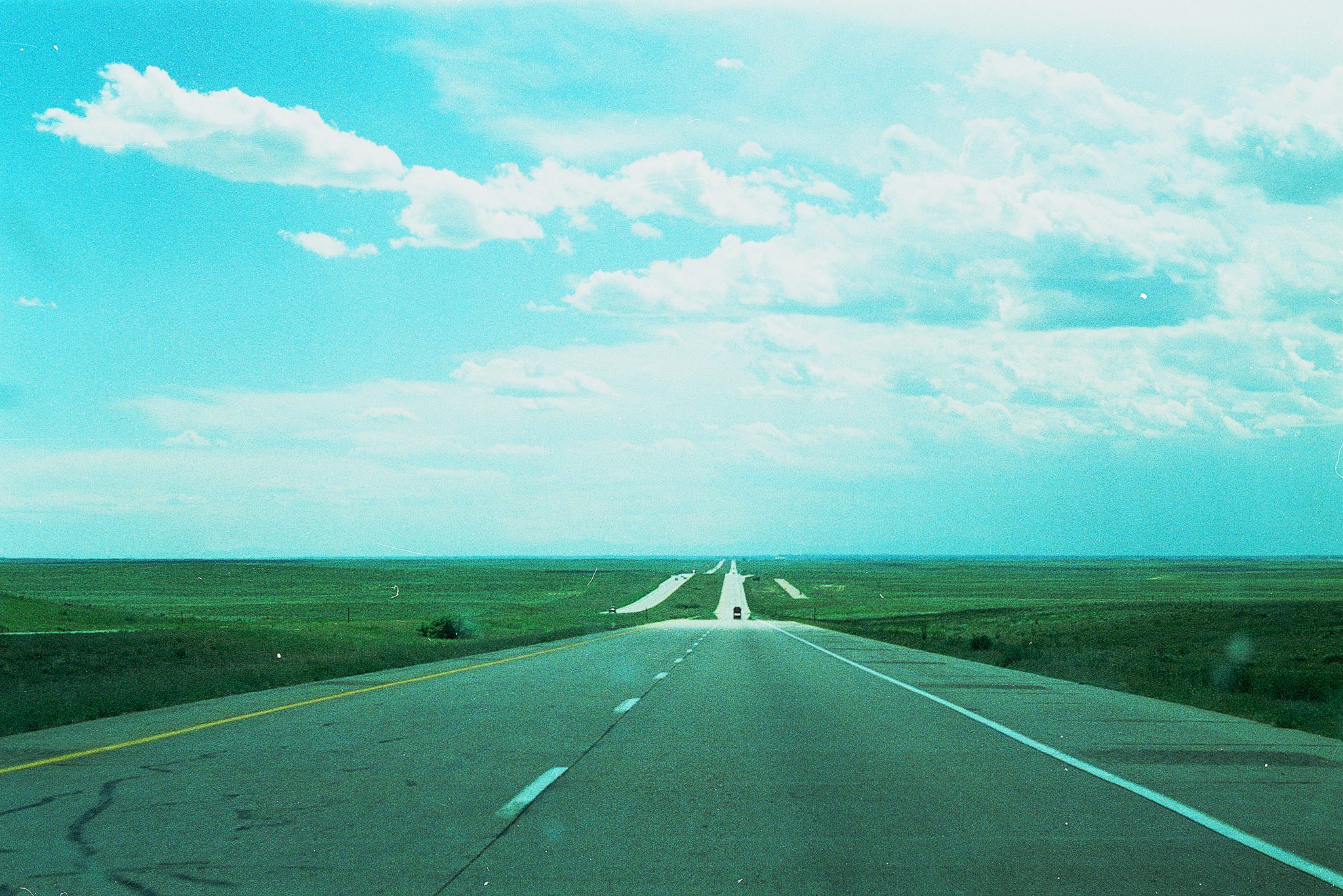 Yes, I was decidedly and undoubtedly lost. Driving down asphalt streets turned into tunnels by the branches of hundred-year-old oaks that lined them, my battered Honda was being brushed by Spanish moss hung lazily overhead. The sleepy wood-paneled homes along the way bore an equal amount of growth and dry rot. Savannah would be quite a different city after a thorough power-washing.

I had three annotated maps in the shotgun seat of my car and a GPS that chided me at each turn. It was easy to get lost here. The streets weren’t well-marked—maybe people around here just know their names? Savannah was just one of nine cities I was visiting this summer. I drove more than 4,500 miles, interviewing people in the contemporary art scene in the South. I was on the road trip for thesis research to gather sources and to insert myself in the spaces I couldn’t get a sense for from Chicago.

But it wasn’t all productive—it was also a trip of indulgent intrigue. I believe most people have an itch to go on the road, live abroad, or run from their everyday lives. There is something nostalgic, freeing, and boast-worthy about a long trip across the country. 2015 was the perfect summer to do so.

I pulled over and parked, watching a scruffy man in a stained white T-shirt sitting on the curb take a swig from a can of PBR. In two minutes I had to turn the car back on for AC. I wondered if locals, like this man, ever acclimated to the heat, or if they just yielded to things out of their control.

I couldn’t keep the air running forever and I was sure I was in the Starland Arts District. I noticed “Starlandia,” written in pink on the building across the street on an art-supplies store. No harm in asking for directions, I thought.

A bell rang when I entered and the guy behind the counter looked up as his pit bull greeted me. I asked for directions, and was immediately asked where exactly I was from. I came away with nothing short of just who I needed to talk to, what to stop for on the road, and where to eat. This turned into an hour-long conversation with the store clerks, eager to tell me all about themselves, Savannah, and town politics. I was taking notes on their recommendations as they looked over my shoulder and orchestrated each spelling.

“Did you say your name was Jac?!” I heard a shout from the back of the store. “I was just about to email you!” Out stepped the art nonprofit director I was trying to track down for an interview. He had a wide toothy grin outlined by a black beard, and jovial eyes.

“Just let me finish up here, I’ll take you over to Back in the Day Bakery. There we can talk and I’ll introduce you to some people!” he said.

“Don’t rush on my account, please,” I told him.

“Don’t worry, I have plenty of time to give you,” he said, smiling back sincerely.

Over the course of my 2015 summer road trip, I learned a lot, but mostly that illuminating things can be discovered while lost. Even though I mapped routes and planned meetings, the trip involved a lot of aimless exploring, wrong turns and dead ends. Each interview led me to a new place or interaction as people opened their offices, homes and studios to me without hesitation. I now regard derailed plans with a respect for serendipity and an appreciation for the generous hospitality of others.

But what if we could no longer get lost? What if the journey wasn’t a part of the experience anymore? What if the strangers we encountered were guarded and the communities we engaged with shuttered their doors again, like they did in 2020? Looking back on the solo trek, I can’t help but think of the way things would be recontextualized post-pandemic, and how the experience of the road trip might change even more in coming years.

A CNN article from summer 2020 provided safety recommendations to families looking to take road trips during the pandemic. Tips include, “carefully plan your route,” “try not to stop” and “safeguard against other humans.” I took two road trips during the pandemic to visit family, and I remember trying not to even make eye contact with the masked people we’d run into, stopping for a bathroom or soda, let alone asking them for lunch recommendations.

How different this was from years past: filling my tank with gas off the potholed stretch of Highway 85, while the store manager’s matted dog looked on, the smell of tobacco, gasoline, and self-serve boiled peanuts wafting through the air. I found each you-blink-you-miss-it town fascinating in its own way, long before considering how the views of its citizens might affect mask usage in public spaces.

I think back to summer 2015, watching the sunset from a damp Asheville motel, repairing the shoes I had walked to pieces that day. And sleeping under a tent of macramé pots, staying with a college classmate en route; it was the third couch I had crashed on that week in exchange for a bottle of cheap wine. I think of the farmers markets I sought out during my travels to eat on a dime: the handled bread loafs, unwashed peaches and double-dipped free samples. How different that would have been in 2020—and even now—wondering how clean the motel rooms really are… how big the social bubble of my host might be… if the barefoot woman with hennaed braids washed her hands with a sanitizer made of seventy-percent isopropyl alcohol?

I can’t count how many times in years past I’ve asked for directions and stopped in greasy, late-night breakfast diners without having to check temporary COVID hours. I now can’t imagine sitting two feet from a Charleston artist in her studio to watch her painting at 2am, a paintbrush in one hand, cigarette in the other. Or stumbling into a packed open mic bar with a young artist who sounded like Johnny Cash, people spilling out into the street, sharing drinks.

I often take road trips to visit loved ones, but during that summer trip, I drove with vague destinations, moseying as the city opened itself up to me. I let each person—each stranger, mind you—lead me to the next in a kind of scavenger hunt of human connectivity. I think of the visible smiles I got from people who could tell I was a tourist passing through.

After a year-and-a-half, most of us have contended with changes the pandemic brought upon us. And while much has returned to normal, we think twice about things we used to take for granted and brace for the next virus. We are more cautious as we travel and vacation.

In Malcom Gladwell’s latest season of the podcast “Revisionist History,” he discusses the future of this innovation. In the “I love you Waymo” episode, he tests this technology and speaks to people who say the era of humans “learning to drive” may be behind us in this lifetime. “We cruise down the streets of Chandler somewhere unseen, algorithms and artificial intelligences guide us unerringly in the direction of our destination.” Gladwell takes us along with him during a ride in an on-demand vehicle service. He sits in the back seat, watching as the wheel turns itself and adjusts for oncoming cars and pedestrians using NASA-grade lasers that can detect obstructions two football fields away.

This new concept of the motorized vehicle would need a destination. It would only ever go the speed limit. You as the driver would not—could not—control or steer or wander. No pressing down the gas and rolling down the window at ninety miles an hour on I-75 as your favorite Led Zeppelin album shreds through the highway air.

Would future technology let you turn down a gravel road, pull over at a moment’s notice, take a dead end or hop a curb? Sure, self-driving would keep you from accidentally turning down a bus-only road—punishable by a $300 traffic ticket in downtown Atlanta—the last day of your trip while looking for a boarded-up art gallery. But the car wouldn’t let you turn a corner down an unmarked street and find an architectural gem, chipped and sagging from a decade of moss and coastal weather. Gone would be the days of getting lost, and finding a local coffee shop in the projects that has the best sugared espresso you’ve ever had.

Sure, the Waymo technology would have avoided the armadillo my fiancé allegedly hit in the middle of the night in Iowa. But then again, had that not happened, we wouldn’t have chosen to check on our destroyed bumper in the parking lot of the Grant Wood “American Gothic” home, eerily lit at 1am—a situation that of course became an impromptu photo shoot.

Over my years of driving, the banal things discovered on road trips have become the most beautiful. I pass time by counting cemeteries and “SALE SALE SALE” fireworks sheds; letting my mind wander as telephone lines rise and fall with the hills of the winding road; green and golden grass, red clay, streets named after families; billboards for the lottery and flea markets; yellowed church signs that look like ransom notes with Bible verses missing letters…

But in an era where you could ride in the backseat, why would you ever travel during the day again? You could fall asleep in your driveway and wake up in another part of the country the next morning. What might be lost in those stretches of road without destinations? If you decided to ride during the day, a self-driving car would allow for more sightseeing from the road. Each time I drive through the Blue Ridge Mountains, I desperately want to document the stacked mountains, each a hazier shade of blue than the last, rolling beyond the overpasses.

There is something so accessible and nostalgic about the road trip. Books, movies, songs—it’s a shared experience. The act of a road trip feels wild, open and carefree. What will it become when it is no longer any of these things?