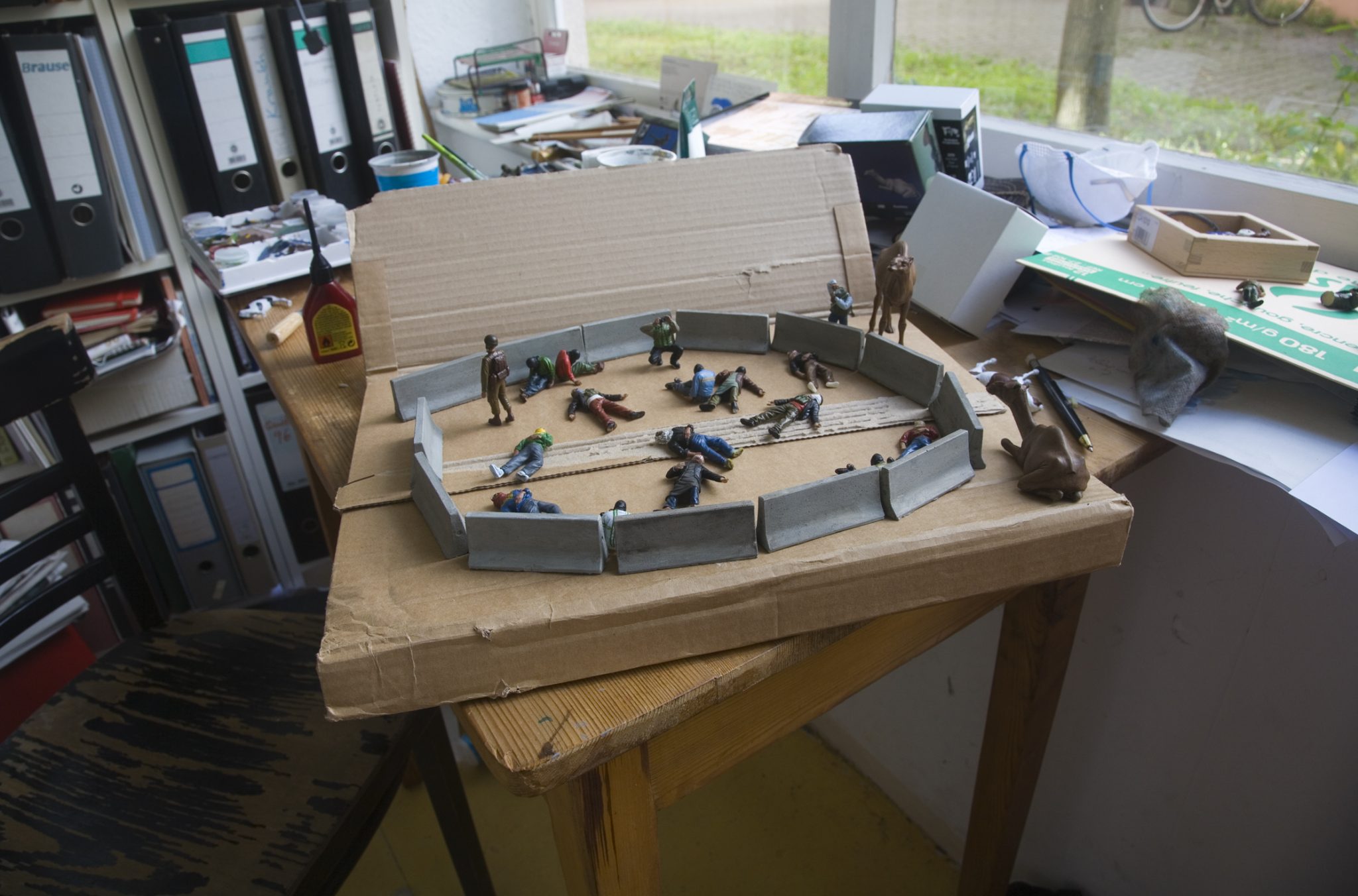 Bani Abidi, “A Table Wide Country,” 2012/Courtesy of the artist and Experimenter, Kolkata

MCA Brings “Bani Abidi: The Man Who Talked Until He Disappeared”

The Museum of Contemporary Art Chicago has announced “Bani Abidi: The Man Who Talked Until He Disappeared,” an exhibition that opens September 4 and brings together nearly two decades of the work of the multidisciplinary Pakistani artist Bani Abidi. Organized by Sharjah Art Foundation and originally presented in Sharjah, United Arab Emirates in 2019, the exhibition uses humor to explore transcultural connections. “Informed by her upbringing in Karachi and experiences in other metropolitan cities including Chicago, where she studied at the School of the Art Institute of Chicago, Abidi approaches cultural hybridity and cosmopolitanism as a master storyteller, using video, photography, sound, and installation to uncover the influence of cultural and political power struggles on everyday life,” the MCA says in a release. “Abidi’s unexpected protagonists blur the lines between actors and non-actors, scripted and spontaneous moments, exposing the absurd theater of our social fabric. Over twenty years of her career, Abidi has become internationally recognized for her satirical critiques of those who hold power and the many ways they wield it. Drawing inspiration from history, literature, mass media, and current events, Abidi’s practice explores the construction of sociopolitical realities and the impact of these narratives on individual experiences.”

Epiphany Center for the Arts Presents Identity: Perspectives on Y(OUR)selves

An extensive group exhibition, created as part of Thresholds Creative Arts Therapy Program during the early part of the pandemic will run until Sunday, September 12, Epiphany Center for the Arts. The exhibition features a range of media, including painting, sculpture, collage and photography in Epiphany’s Chase Gallery. More here.

The Loop’s Russian Tea Time Is Back

A fine portrait at Borderless by Mark Dovich: “For Altyn and Enesh Mantyyeva, co-owners of the iconic Chicago restaurant Russian Tea Time, serving the dishes of their childhood isn’t just business — it’s a personal responsibility… It’s no ordinary Chicago restaurant: the servers speak Russian, Soviet-era propaganda posters hang on the walls, and there’s a collection of large silver samovary, or tea urns, on display. In fact, Russian Tea Time, in the heart of the Loop, is one of the city’s few Russian restaurants… ‘It’s not like opening a coffee shop. The menu is like a constitution that you need to modify or update with time but not completely change. Everything was personally created by Klara Muchnik. She used to have a catering business back in Uzbekistan. The menu was amazing, but it was like six pages long. So we cut it in half,” Enesh says. “We left the signature unique items that we couldn’t touch, and we added some. And we didn’t want to change! We grew up eating golubtsy. We grew up eating borscht.'”

The Circle takes to Twitter to hint what’s coming:”We took a little time away from social media, but are back and excited to tell you more about our renovation. We will reopen by the end of September with lots of fun new surprises, and look forward to seeing y’all.” The bio remains the same: “People from all countries welcome at this shithole.”

Colin McMahon Out As Chicago Tribune Editor; Charleston Post And Courier Editor In

Colin McMahon ends an eighteen-month run as editor-in-chief of the Chicago Tribune and chief content officer of Tribune Publishing, reports Robert Feder, “citing the need for ‘an injection of new energy and commitment’ to the beleaguered newsroom” now owned by Alden Global Capital. McMahon’s departure marks the end of a thirty-four-year stint for McMahon, who moved upward from copy editor. From the Tribune’s report: “Succeeding McMahon will be Mitch Pugh, who has been named executive editor of the Chicago Tribune after eight years in the same role at The Post and Courier in Charleston, South Carolina. His first day will be August 30. ‘The search for a new editor included a diverse group of candidates both inside and outside of Tribune Publishing,’ Chicago Tribune General Manager Par Ridder said in a memo to employees. ‘Ultimately, it was decided that Mitch was the right person for the role given his significant journalistic achievements, leadership skills and experience driving digital subscriber growth.'” The Chicago Tribune Guild tweeted: “As with past editors, we look forward to working with Mitch Pugh to protect the Chicago Tribune newsroom and serve the public. Rest assured we will continue to be vigilant and aggressive in defending our mission. We hope he will be a partner… Thank you Colin McMahon for your service during a challenging time.”

Axios ups its Midwestern presence with hires of Justin Kaufmann and Monica Eng from WBEZ, reports Rob Feder. “As part of the company’s growing local news initiative, they’ll write a daily Chicago newsletter, expected to be launched this fall.”

Listening To The Local R&B Scene

Evan F. Moore at the Sun-Times talks to singers on Chicago’s R&B scene about recent trends and how the scene should support its musicians. “Lauren Dukes, a singer who specializes in blues, soul, jazz and R&B, has mixed feelings about the Chicago R&B sound,” reports Moore. “Well, locally, something I definitely like is it’s easier and more accessible for the average independent artist who doesn’t have major label backing. What I don’t like about the [scene] is — this may not be subject to just locally — I can’t tell the voices apart. I think we’ve moved toward less singing — melodic rap. Not that there isn’t space for everybody, but rap has its own sub-genres. R&B doesn’t need to go into that direction. I’d like to hear more singers. The R&B artists I tend to gravitate toward are ‘sangers,’ as we say in the church.”

It’s been seventeen years since a Dave Matthews tour bus honeyed the Chicago River and a tour boat with 800 pounds of effluent, sickening some of the 120 passengers. Eater notes the anniversary was marked by the musician eating out in Chicago at RPM Seafood, about a half mile from the 2004 incident. “Matthews and his family on Sunday night sat on a private terrace with a view overlooking the river. The group’s order included Japanese hamachi, 60-day dry-aged New York strip steaks, and sides of hen of the woods mushrooms.”

“Chicago Improv Was Dead. Can New Leaders Revive It?” Queries The Times

“Less than a week apart, both iO and Second City were put up for sale, heightening anxiety among performers who were already worried about improv’s post-pandemic future. Could improv be saved in [Chicago]? The short answer is yes,” writes Julia Jacobs at the New York Times. “Less than a year after the businesses went on the market, buyers who believe in Chicago improv stepped up. Both are industry newcomers: Second City is now owned by a New York-based private equity firm and iO by a pair of local real estate executives… Decades of history and cultural relevance are part of what made these theaters appealing acquisitions, but after calls for transformational change, a new era of leadership is now grappling with how much of the old improv culture they want to preserve and how much they are willing to give up.”

At the Reader, Douglas Post remembers recently passed playwright Sally Nemeth, whose work in Chicago theater before her departure to Los Angeles in 1995 remains influential. Post builds a history of the playwrights and groups in which she was a force. “This was a remarkable outpouring of work from our collective and none of it could have happened without Sally’s fortitude and ingenuity. She kept us centered. And she kept us moving ahead. It is a rare thing to meet someone who is happy being a playwright among playwrights. Sally was one of those people… Scott [McPherson] would go on to write ‘Marvin’s Room.’ Nick [Patricca] would write ‘An Uncertain Hour.’ And Sally’s play ‘Mill Fire’ would have its premiere at the Goodman Theatre, while ‘Spinning into Blue’ would be produced at Victory Gardens Theater and ‘Holy Days’ would open in London. She received grants from the National Endowment for the Arts and the New York Foundation for the Arts, as well as a new play commission from South Coast Repertory.”

Congo Square Theatre Company, one of the nation’s leading African American theater companies, has announced its season, a mix of online and in-person programming, running from sketch comedy to an interactive “community ritual” touring Chicago neighborhoods. “We are thrilled for this coming season and the return to live theater,” Congo Square executive director Charlique C. Rolle says in a release. “COVID, in some ways, has been a blessing for the organization, giving us new tenacity towards our vision. In the coming year, Congo Square will further anchor our mission and vision to be a haven for artists of color and truly be a home that develops and equips the next generation of Black voices. Further, we are excited to continue expanding our engagement with our audiences both in the physical and digital space and bring fresh content and works exploring the complexities and expansiveness of Black culture in a way that is accessible to all.” More here.