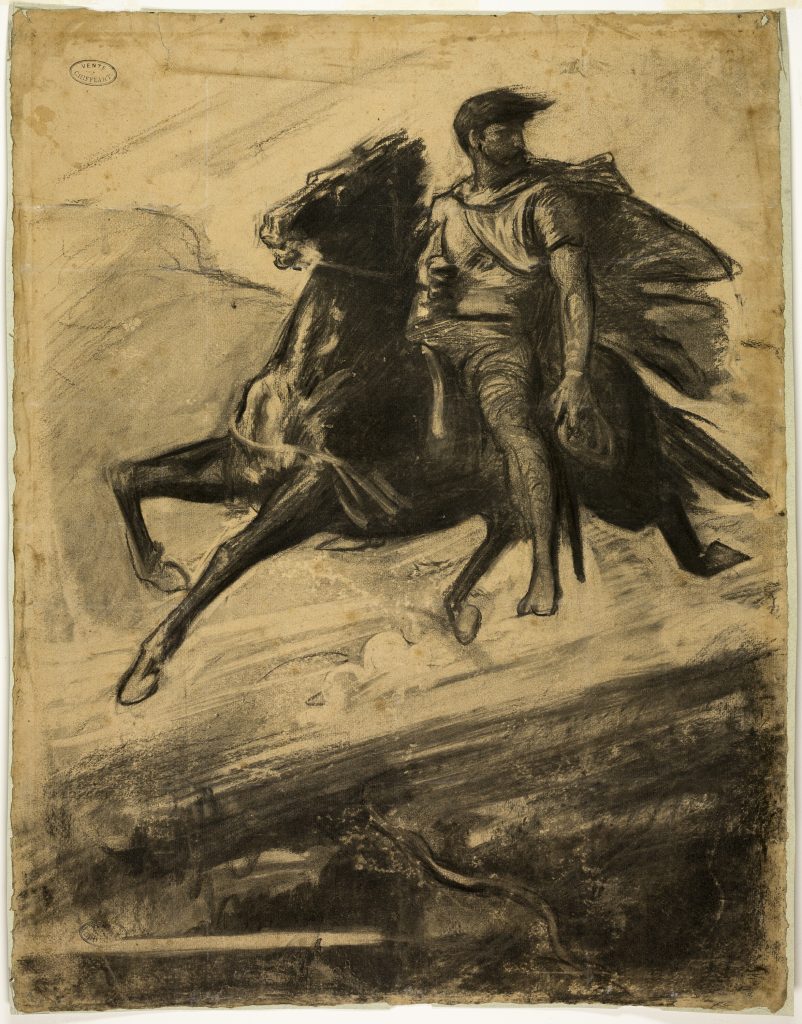 “Man Riding a Horse through the Air,” Nicolas-François Chifflart/courtesy Art Institute of Chicago

ARIES (March 21-April 19): “We need to become more unreasonable but in an intelligent way,” says Aries politician Jerry Brown. Yes! I agree! And that’s especially true for you right now, Aries. To Brown’s advice, I will add this message from Aries fashion designer Vivienne Westwood: “Intelligence is composed mostly of imagination, insight—things that have nothing to do with reason.” Here’s one further suggestion to help you take maximum advantage of cosmic rhythms, courtesy of Aries historian Arnold J. Toynbee: “The supreme accomplishment is to blur the line between work and play.”

TAURUS (April 20-May 20): “I have become whole and complete, like a thundering cloudburst in summer,” wrote Taurus poet Miklós Radnóti. I love that metaphor for fullness: not an immaculate icon of shiny, sterile perfection, but rather a primal, vigorous force of nature in all of its rumbling glory. I hope you like this symbol as much as I do, and I hope you use it to fuel your creative spirit in the coming weeks. PS: Keep in mind that many indigenous people welcome rainstorms as a source of fertility and growth.

GEMINI (May 21-June 20): “Pandiculation” is a word that refers to when you stretch and yawn at the same time. According to my understanding of the astrological omens, you will benefit from doing a lot of pandiculations in the coming days. I also recommend gazing lazily out the window and looking at the sky a lot. Keep your shoes off as much as possible, get a massage or three, and let yourself sleep more than you customarily do. Did you know that sighing deeply is good for your lungs’ health? Here’s your homework: Dream up all the things you can do to relax and renew yourself. It’s prime time to indulge in generous acts of self-healing.

CANCER (June 21-July 22): The ancient Roman author Pliny’s ten-volume “Natural History,” written in the first century, was a monumental encyclopedia of the natural world, unprecedented in its own time and for centuries afterward. It offered compilations of facts about astronomy, geography, zoology, botany, mineralogy and many other subjects. There was one big problem with it, however. It contained a great deal of erroneous information. For example, Pliny described in detail many non-existent animals, including dragons, flying horses and giant serpents that swallowed bulls and snatched birds out of the sky. My reason for telling you this is to inspire you to be extra discerning in the coming weeks. Be especially skeptical of authorities, experts, and other know-it-alls who are very confident despite being inaccurate or erroneous. It’s time for you to increase your trust in your own authority.

VIRGO (Aug. 23-Sept. 22): Between 37 and 41 BCE, Virgo-born Caligula served as third Emperor of Rome. To do so, he had to disprove the prophecy of a renowned astrologer, Thrasyllus of Mendes. Years earlier, Thrasyllus had predicted that Caligula, despite being well-connected, “had no more chance of becoming emperor than of riding a horse across the Bay of Baiae”—a distance of two miles. Once in power, Caligula arranged to have a series of pontoon boats arrayed across the bay, enabling him to ride his favorite horse Incitatus from one shore to the other across the Bay of Baiae. I foresee the possibility of a comparable turn of events for you, Virgo. Is there a curse you want to undo? A false prophecy you’d like to cancel? Someone’s low expectation you would love to debunk? The coming weeks will be a favorable time.

LIBRA (Sept. 23-Oct. 22): College student Amelia Hamrick studied the right panel of Hieronymus Bosch’s fifteenth-century painting “The Garden of Earthly Delights.” It depicts a hellish scene. Cities are on fire. Weird beasts devour sinful humans. There are demons and torture chambers. Hamrick did what no one in the history of art had ever done: She transcribed the musical score that the artist had written on a man’s naked hindquarters. Her work inspired a composer to create a recording entitled “500-Year-Old Butt Song from Hell.” In the coming weeks, I invite you to perform feats comparable to Hamrick: 1. Explore the past for useful, overlooked clues. 2. Find or create redemptive transformations out of stressful situations. 3. Have fun telling stories about your past misadventures.

SCORPIO (Oct. 23-Nov. 21): Born on one of the Galapagos Islands, Diego is a giant tortoise who has lived for over one hundred years. He’s a member of the Hood Island species, which had dwindled to a population of fifteen by 1977. That’s when he and his tortoise colleague, whose name is E5, became part of a breeding program with twelve female tortoises. E5 was reserved in his behavior, but Diego was a showboat who vocalized loudly as he enjoyed public mating rituals. Together the two males saved their species—producing over 2,000 offspring in subsequent years. According to my astrological analysis, you could be as metaphorically fertile as Diego and E5 in the coming months—even if you prefer to adopt an approach more akin to E5’s.

SAGITTARIUS (Nov. 22-Dec. 21): “The meaning of my existence is that life has addressed a question to me,” wrote psychologist Carl Jung. “Or, conversely, I myself am a question that is addressed to the world, and I must communicate my answer, for otherwise, I am dependent upon the world’s answer.” These are superb meditations for you Sagittarians during the coming weeks. Between now and October 1, I invite you to keep a journal where you write about two subjects: 1. What is the main question that life asks you? 2. What is the main question that your life asks the world?

CAPRICORN (Dec. 22-Jan. 19): North Korea’s Capricorn leader Kim Jong-un has an amazing résumé. Official reports say he learned to drive at age three and was an accomplished sailor at nine. As an adult, he developed the power to control the weather. He’s a skilled musician and artist, as well as a scientist who developed a miracle drug to cure AIDS, Ebola, cancer, heart disease and the common cold. Most impressively, Kim is an archaeologist who discovered a lair where magical unicorns live. Is it possible you have unexpressed powers like these, Capricorn? If so, the coming weeks will be a favorable time to identify them and start tapping into their potential. It’s time to develop your dormant talents.

AQUARIUS (Jan. 20-Feb. 18): Aquarian author Toni Morrison testified, “I think of beauty as an absolute necessity. I don’t think it’s a privilege or an indulgence. It’s almost like knowledge, which is to say, it’s what we were born for.” I urge you to adopt her perspective during the next four weeks, Aquarius. In my astrological opinion, a devoted quest for beauty will heal exactly what most needs to be healed in you. It will teach you everything you most need to know.

PISCES (Feb. 19-March 20): Poet and translator Anne Carson periodically joins with her husband Robert Currie to teach a workshop called “EgoCircus.” It’s an ironic title, because the subject they teach is the art of collaboration. To develop skills as a collaborator, of course, people must lay aside at least some of their egos’ needs and demands. In accordance with current astrological potentials, I encourage you to stage your own version of EgoCircus in the coming weeks. The time is ripe for you to hone your creative togetherness and synergistic intimacy.

Homework: Tell me the most important lesson you’ve learned since 2021 began. [email protected]