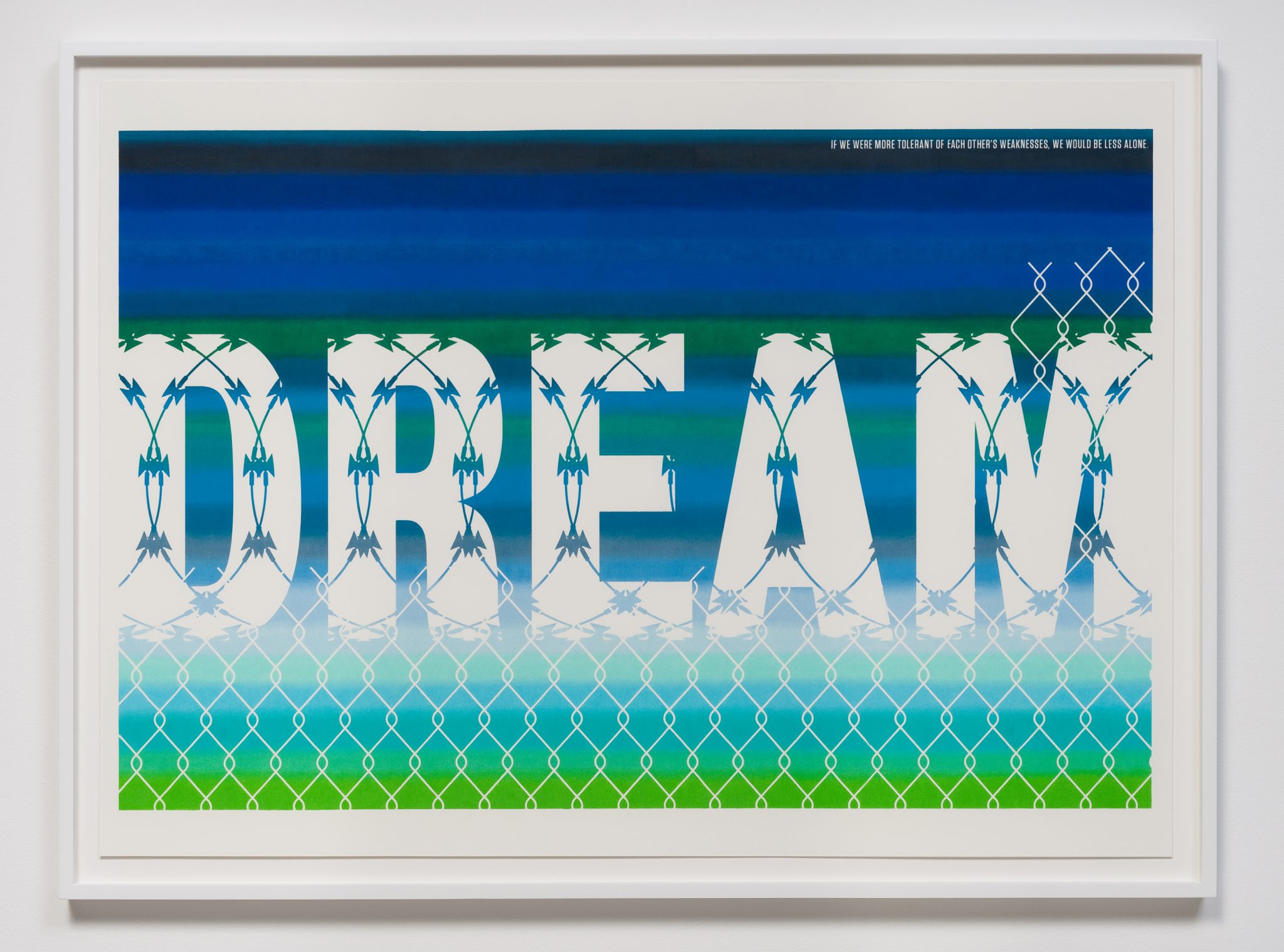 The Museum of Contemporary Art Chicago presents the first major retrospective of Andrea Bowers from November 20 to March 27, 2022, highlighting two decades of the artist’s wide-ranging practice focusing on pressing social and political issues. The Los Angeles-based artist has built an international reputation for her impressive large-scale installations, detailed color pencil drawings, and videos on topics including women’s and workers’ rights to climate change and immigration. Collaborating with individuals and groups directly organizing around urgent issues, Bowers foregrounds the struggle for justice across many movements and generations of activists, the MCA says in a release.

As part of Andrea Bowers’ exhibition, the MCA is working with Chicago-based organizations A Long Walk Home and Centro Sin Fronteras to present their work in dedicated galleries in the exhibition and in public programs. Co-produced with the Hammer Museum in Los Angeles, the exhibition is organized by former MCA Chief Curator Michael Darling with Hammer Museum Chief Curator Connie Butler. “Bowers is a chronicler of contemporary history, documenting activism as it unfolds and collecting research on the frontlines of protest. By studying the methods, means, and materials of protest, Bowers focuses on the people leading and participating in public discourse. Her practice celebrates individuals’ tenacity and capacity to influence longstanding social, political, and environmental issues.” More here.

The board of the Museum of Contemporary Art (MOCA) in Los Angeles voted to appoint Johanna Burton, the head of the Wexner Center for the Arts in Columbus, Ohio, as its new executive director, reports The Art Newspaper. “She will assume many of the managerial duties that Klaus Biesenbach has performed since he was named MOCA’s director in late 2018, and he will shift to the role of artistic director. Her job begins on 1 November.”

Theaster Gates’ Rebuild Foundation is making progress at St. Laurence, a shuttered elementary school being transformed into an arts collaborative, reports the Tribune. “I feel like we’re slowly rebuilding the necessary infrastructure so that artists can thrive in Grand Crossing,” Gates tells the paper. “In one place, over a decade, these are the things that we can do. By being focused in on one site, I’ve been able to have more impact.”

Bike lanes and other safety fixes will be installed at the Logan Square intersection where two bicyclists have been killed, reports Block Club Chicago. “A few months after a driver struck and killed ‘School of Rock’ drummer Kevin Clark while he was riding his bike at Logan Boulevard and Western Avenue, the city is making safety improvements.” The city’s Department of Transportation “is installing protected bike lanes with plastic posts and road markings on Logan Boulevard from just west of Western Avenue to Diversey Avenue… To install the bike lanes, the city is reducing the traffic lanes on Logan Boulevard… The bike lanes will be parking-protected from Elston Avenue to Diversey Avenue.”

“The Little Village Arch, a gateway into the predominantly Latino Southwest Side neighborhood, has received a preliminary landmark designation — the first time an architect of Mexican descent has had a structure get landmark status in Chicago,” reports Block Club Chicago. “The Commission on Chicago Landmarks on Thursday unanimously approved preliminary landmark status for architect Adrian Lozano’s arch, 3100 West 26th, which welcomes residents and visitors to the neighborhood that is often referred to as the ‘Mexican capital of the Midwest.’ The arch also becomes the first iconic symbol of the Latino community in Chicago to be landmarked.”

“The president of Landmark Development wants all of Chicago to embrace a new neighborhood — his One Central project,” reports the Sun-Times. “It would consist of more than 9,000 homes mostly in high-rises west of Soldier Field, built on thirty-one acres and covering Metra tracks.…Developer Bob Dunn is releasing numbers from a transit study he commissioned that he says demonstrates the feasibility and sense of his proposal. ‘At its core, it’s a transit project.’ He said beneficiaries include the museums, McCormick Place and the Bears or whoever else uses Soldier Field…The nub of this transit hub is a $3.8 billion package Dunn wants taxpayers to buy. By four systems, he means that it would serve Metra, the CTA, Amtrak and a tram-like circulator he calls the CHI-Line that would whisk people from McCormick Place to downtown and Navy Pier. It would use a busway now limited to conventioneers and VIPs. Dunn said his financial partners include the union-backed insurance firm Ullico; JLC Infrastructure, which is part of Loop Capital; and Johnson Controls. His high-rises might cost $20 billion, but estimates at this point are guesses.”

“The original Jim of Jim’s Original Maxwell Street Polish Sausage Stand decided to stay open 24 hours a day about 65 years ago. That’s because when he closed, people would break in,” reports WBBM. Landlord UIC has told the proprietors that “for neighborhood safety reasons [they] have to close between 1-6am.” Adds the Sun-Times: “Jim’s Original — famous for its Maxwell Street Polish sausages and bone-in pork chop sandwiches — is, for the first time in living memory, no longer open around the clock… The new hours kicked in Friday. When late-night customers pulled up to the cinder block building, some of them didn’t take too kindly to being turned away. ‘The customers were very upset,’ said Betty Domagala, a manager who has worked at Jim’s for twenty-seven of its eighty-three years. ‘The [night] general manager got called names. We had security here.'”

Restaurant Jobs Down Another 41,500

In a tweet advocating replenishment of the Restaurant Revitalization Fund, The Independent Restaurant Coalition reports a loss of 41,500 more jobs over the past month, “and we’re still down 966,300 since the start of the pandemic.”

Zoogoers can visit the Beer Garden on Brookfield Zoo’s East Mall from 11am-5:30pm to live polka music during this year’s Oktoberfest, with authentic food, beer, and music on Saturday and Sunday, September 25-26. Guests can purchase fall favorite fare from a selection including bratwurst, sausages and pretzels with beer cheese. Guests over 21 years old who spot the Leinie’s PolkaPedi may be treated to complimentary memorabilia. More here.

The strike against Sysco restaurant suppliers has ended, reports Eater Chicago. “The 125 unionized workers employed at the food distributor’s suburban Des Plaines’ facility reached a tentative agreement with Sysco… Sysco is North America’s largest food distributor providing meats, produce and other supplies for restaurants, schools and hospitals around the country. The strike threatened to snarl the operations of Chicago restaurants with deliveries canceled and delay[ed].” About 200 Sysco truck drivers also walked off their jobs in support of the warehouse workers.

At the Nation, John Nichols puts a finer point on the politics of recently passed Ed Asner: “There was a time, before Bernie Sanders ever thought about running for the presidency, and before Alexandria Ocasio-Cortez was born, when Asner was arguably the best-known democratic socialist in the United States. As an instantly identifiable celebrity, with an image as a no-frills newsman with a big heart, he used his prominence to define the word for generations of Americans who rarely heard it mentioned in a positive light. ‘Socialist means a thing that will curb the excesses of capitalism: the increasing wealth of the rich and decreasing wealth of the poor,’ Asner explained. ‘I’d like to see a national guarantee of health, a national guarantee of education (through college), fair housing, and sufficient food.'”

“I’ve spent nearly a decade of my life with The Rumpus—it is hard to condense the weight of what’s happened in those years into coherent sentences,” Marisa Siegel writes to The Rumpus readers. “I am writing today to share that one of the dreams child-me held close is coming true: I will be making the transition into book publishing. On Tuesday, I begin as Senior Acquisitions Editor (trade) at Northwestern University Press. While I’ll work remotely first, I’ll be relocating to the Chicago area in the coming months. I’m eager and excited for this new adventure—a new city to explore, a new team of brilliant minds to collaborate with and learn from, and a new way to make space for the powerful literature today’s moment calls for.”

Registration is open for the ceremony to induct the newest class into the Chicago Literary Hall of Fame. Registration is free, but open only to those vaccinated. Frank London Brown, Carlos Cortez, Jeannette Howard Foster and Gene Wolfe will be inducted on Sunday, September 19 at City Lit Theater (on the second floor of the Edgewater Presbyterian Church at 1020 West Bryn Mawr). Co-presenters include the American Writers Museum, Poetry Foundation, Cliff Dwellers, Guild Literary Complex, National Museum of Mexican Art, Open Books and Chicago History Museum. Register here.

Reginald Gibbons will be the tenth Chicago author to receive the Fuller Award for his lifetime achievements as an author, scholar, teacher and institution builder. The event is free and open to the public. Ydalmi Noriega will emcee the event, which includes speakers Michael Warr, Angela Jackson, Chris Abani and Stuart Dybek. Donna Seaman will lead a conversation with Gibbons following his acceptance speech. The Fuller Award recognizes Chicago authors who have made an outstanding lifetime contribution to literature. “The award was inspired by the literary contributions of Henry Blake Fuller, one of Chicago’s earliest novelists and author of ‘The Cliff-Dwellers’ and ‘With the Procession,'” which use the developing city of Chicago as their setting and are considered by many to be the earliest examples of American realism. The event will be via Zoom on September 30; register here.