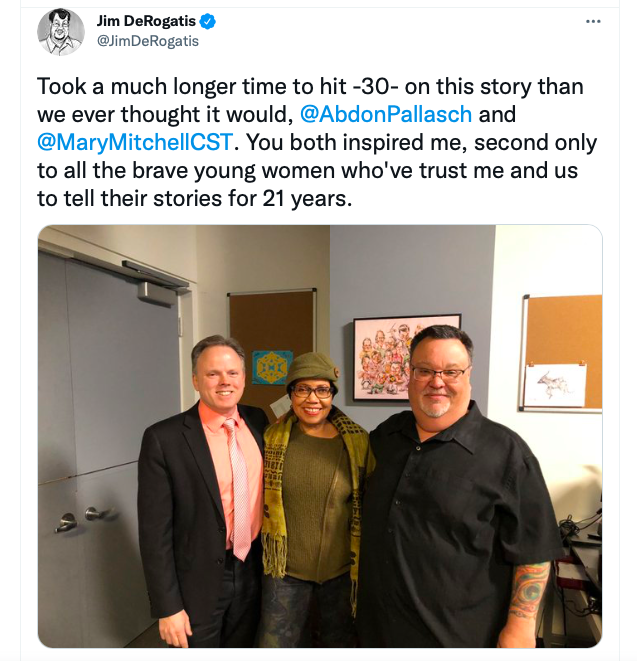 Wrightwood 659 presents “Shahidul Alam: We Shall Defy,” an exhibition of images and texts that illuminate the life and work of the renowned Bangladeshi photojournalist, teacher, writer, institution-builder, and activist Shahidul Alam, whose efforts on behalf of human rights have provoked both accolades and imprisonment. The exhibition begins October 8; more on Wrightwood 659 here.

“Air Pollution, Greenhouse Gas, and Traffic Externality Benefits and Costs of Shifting Private Vehicle Travel to Ridesourcing Services,” is the title of the report. Summarizes author Brian Merchant: “Uber and Lyft’s pitch was always that they’d reduce congestion, emissions, car ownership and the total costs that cars impose on society. A new paper shows that the complete opposite has happened—taking an Uber costs society about sixty percent more than your own car. There is only one net environmental benefit of people taking a Lyft and Uber over their own car, and that’s with particulate pollution exhaust, which is less because cars are being started less frequently since drivers are moving between riders without turning off their cars.”

“[E]verything else—congestion, carbon emissions, noise… is significantly worse with Uber and Lyft for the simple reason that… drivers have to drive more miles to pick people up and are often just deadheading or driving aimlessly waiting for new rides. The researchers found no evidence at all that Uber and Lyft have led to less car ownership—if anything it’s risen—or that it led to more transit use; if anything, it may have fallen.”

David Roberts of Volts breaks down the study in pictures and words. One of his points: “You have to understand one key fact: [these] vehicles travel more miles per trip. They have to drive between where they drop off one fare and pick up another, which sometimes involves quite a bit of just wandering around. This time spent with no passenger is called ‘deadheading,’ and those miles must be added to their trip miles.”

Neil Steinberg questions the tub-thump by the New York Times and others to return to the “normalcy” of hours-long commutes. “Don’t get me wrong. A newsroom is an exciting place, and I would occasionally go in to pick up my mail, to schmooze, to press the flesh, grab lunch somewhere. It was fun, and it helped that I went in when I wanted and stayed home when I didn’t, which was most days… What if nothing that happens at the office can possibly counterbalance the time lost commuting, and the smartest thing any business could do is ditch their physical space entirely and distribute the savings to the staff as bonuses?”

“Opposition to the project, legal and otherwise, persists, including whether nearby residents will benefit and not be dislocated,” writes Alice Yin at the Trib. “Barack and Michelle Obama’s return to Chicago caps off a five-year journey to a groundbreaking that was expected to happen far earlier, with the center originally slated to open this year. Instead, shovels only hit the ground last month after a legal bid to halt construction failed in the U.S. Supreme Court. Opening day is now scheduled for 2025, but the park preservationists determined to get the Obama Foundation to relocate the campus remain confident.”

“At the same time, the Obama Community Benefits Agreement Coalition, a group of activists demanding more protections for residents they fear will be displaced by the project, said they haven’t given up their fight… The coalition announced a protest was planned next to the Jackson Park site at noon Tuesday, in support of affordable housing measures for South Shore similar to the City Hall’s ordinance for Woodlawn renters and homeowners passed last year.”

“Work has begun to turn the former Heartland Cafe site in Rogers Park into an apartment building, marking the start of a controversial project that saw coronavirus-caused delays,” reports Block Club Chicago.

The City Council has approved plans for an Uptown theater building for the TimeLine Theater Company at 5033 North Broadway, reports Chicago YIMBY. “The building will be built in two phases, utilizing an existing century-old warehouse building near the corner of Broadway and West Argyle. The theater company, which was started with fifty dollars in 1997, has owned the building since 2018 and has been working with architecture firm HGA on the design, which incorporates the existing glazed-tile building into its new home.”

“The fact that grilled Indian meats have not had exposure in the U.S. continues to shock me to this day,” Ajit Kalra says in a profile by Eater Chicago. Opening Bhoomi in Urbanspace Washington, Kalra follows an influential father’s footsteps. “The menu features roti made with organic whole wheat. These are used for taco-like items filled with steak, lamb, prawns, or paneer. The Kalras say a vegan option is upcoming. There’s also a lamb burger with salads and quinoa bowls. [He] has an MBA from Northwestern University’s Kellogg School of Management and leveraged those connections to secure a stall at Urbanspace. Before the food stall, they operated as a ghost kitchen inside the Hatchery, the food incubator in Garfield Park. ‘Somebody, someday is going to create the next Chipotle for Indian food,’ he says.”

Sarah Sherman, headlined a “weird comic” by the Sun-Times, has been hired by Lorne Michaels’ forty-seven-year-old career springboard, Saturday Night Live. “Sherman, a Northwestern grad who grew up on Long Island, had been both a fixture of Chicago comedy since 2015 and an outlier, with her grotesque comedy of absurdity and (fake) bodily fluids. ‘I’m very gross.'” Tweeted Sherman: “SNL just made a HUGE mistake!!”

Journalism’s Failure Of “Bothsides-ism” In Era Of Lies

“I used to edit Page 1 stories for the Chicago Tribune, including many from Washington. In this thread, I explain why the media (including me) have been unintentionally complicit in the rise of fascism that threatens our democracy…” A confession and lesson Twitter from former Trib editor Mark Jacob: “Mainstream media have long tried to treat Republicans and Democrats equally. Some, like me, thought that was the way to be fair. In fact, it was the way to be lazy and not have to sort out the facts. Just quote a Democrat and quote a Republican and you’re done. When I edited political stories, I went so far as to count the quotes from Republicans and Democrats, thinking an equal number would make us fairer. I didn’t think I was helping either party. I thought I was helping the readers. I was wrong…The media’s self-assigned job to treat Republicans and Democrats equally has compelled them to pump up coverage of Democratic scandals. It’s fairness-signaling.”

“The Republicans have overwhelmed the media with corruption. They’ve created scandal fatigue, prompting journalists to do something I call ethics norming. That’s when something that would have been a huge scandal in the recent past is considered normal now. The Republicans have pulled off quite a trick. If news is defined as something unusual happening, GOP corruption is not news because the party is so widely corrupt. Some media have turned off their outrage impulse and decided that corruption is normal… The media shouldn’t elevate liars in the interest of ‘fairness.’ Yes, media should be fair – to the readers, to the facts. But not to the 2-party system. To our democracy. We are now in the midst of an assault on democracy unlike any our country has ever seen. Any journalist who doesn’t frame their reports in that context is doing a grievous disservice to our country.”

Replies commentator Anil Dash: “I’m hoping so many in the journalism industry can finally hear this critique since it’s being leveled by an inarguable insider, who owns his own complicity in the rise of modern fascism in America. Anyone who’s in power now at a newspaper or magazine willing to similarly reflect?”

“As some public radio stations are finding success with donor acquisition, two recent studies show signs of sluggish membership growth across the system as a whole,” reports Current.

On Twitter, Jim DeRogatis salutes the former Sun-Times colleagues who, decades ago, began the investigations of what R. Kelly was doing in plain sight: “Took a much longer time to hit -30- on this story than we ever thought it would, Abdon Pallasch and Mary Mitchell. You both inspired me, second only to all the brave young women who’ve trust[ed] me and us to tell their stories for 21 years.”

“Some will argue otherwise, but we see a strong line connecting Anita Hill, the Black woman lawyer of great credibility who in 1991 was reviled when she accused her former boss, U.S. Supreme Court nominee Clarence Thomas, of sexual harassment and the young Black women who bravely came forward to call Kelly to account,” writes the CST editorial board. “They, too were reviled—there’s no stopping the internet—but they were heard and believed where perhaps it mattered most, before a federal jury in Brooklyn. If shaming the R. Kellys of the world does nothing to turn the tide of misogyny and patriarchy that leave American women all too vulnerable, maybe a few decades behind bars for Kelly will send a stronger message.”

A full season of live theater and dance productions returns to NIU, as the School of Theatre and Dance welcomes audiences to the theaters in the Stevens Building on the main campus in DeKalb. The attractions include classics like Shakespeare’s “Twelfth Night,” “Three Sisters,” “Edward II,” “RUR,” “The Conference of the Birds,” adapted from Attar’s epic poem, as well as newer offerings like Ike Holter’s “Hit the Wall” and Julia Cho’s “The Language Archive.” The season opens Friday, October 1 with a production of “Kernel of Sanity,” written by Kermit Frazier and directed by School of Theatre and Dance alum Alys Dickerson. More here.

Surprise! You’re Not A 2021 MacArthur Fellow

The MacArthur Foundation has named its twenty-five 2021 MacArthur Fellows, who received the honor and the no-strings-attached $625,000 fellowships, without warning. Film scholar, archivist and curator Jacqueline Stewart [Newcity Film 50], the chief artistic and programming officer of the Academy Museum of Motion Pictures is among the recipients. “I’m thrilled—I’m really surprised,” Stewart says in a release via UChicago, where she is appointed in the Department of Cinema and Media Studies. “I did not realize that I was under consideration for this, so it’s amazing. It’s just an incredible validation of my work. This is just a remarkable opportunity to think in broader ways about what’s possible in my work than I ever have before. So I am challenging myself to take my time to figure out what I want to do.”  Historian and author Keeanga-Yamahtta Taylor “has lived in Chicago for more than a decade. Stewart was born and raised in Hyde Park. And while they work in different academic areas, both women said their experiences with Chicago’s Black neighborhoods played a pivotal role in their intellectual development,” reports the Sun-Times.

“‘Chicago is uniquely racist,’ said Taylor, who researches why racism persists in the United States. ‘I came to the city in a U-Haul and the first thing that struck me was the segregation. You are driving for miles where it is wall-to-wall Black people, and you don’t see any white people until crossing through the Loop or going north on Lake Shore Drive,’ said Taylor, who graduated from Northeastern Illinois University in 2007 and holds a master’s degree and a doctorate from Northwestern. ‘That’s how you know that government was involved, that banks were involved, that real estate was involved, because you could not achieve that degree of racial isolation just from the kind of personal mores of white or Black people.'” Here’s the complete list of 2021 MacArthur Fellows.