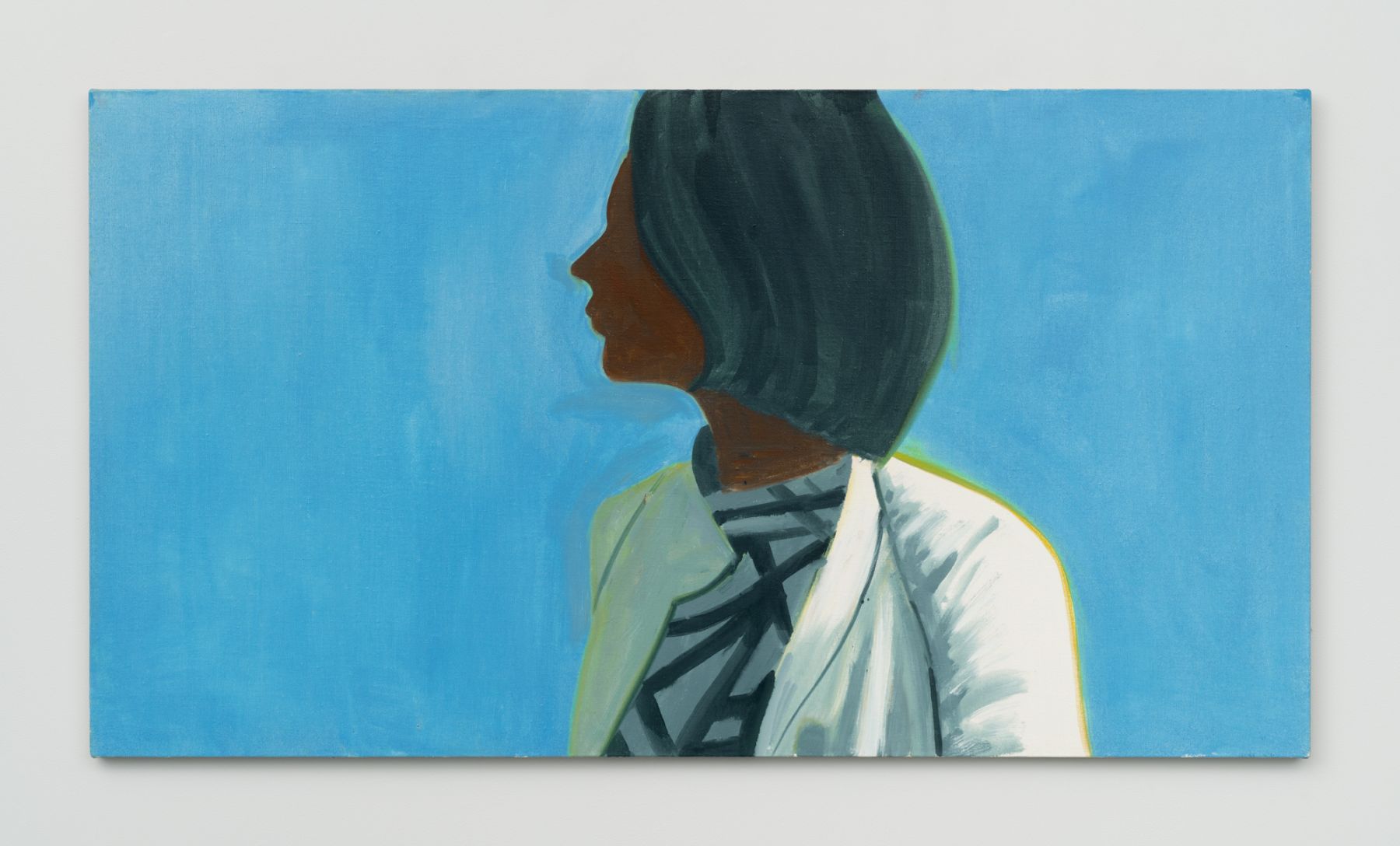 “One of the most influential American artists of the last half-century and a leading figure of contemporary figurative painting, Alex Katz presents a new series of eleven large-scale portraits in a focused solo exhibition, ‘The White Coat,'” Gray Chicago announces. “‘Alex Katz: The White Coat’ opens with a public reception on Friday, October 22, 5pm-7pm, at Gray Chicago, 2044 West Carroll, through December 17, 2021. Created between 2020 and 2021, Katz’s ‘White Coat’ paintings are based on the likeness of Vivien Bittencourt, a photographer and filmmaker, and the artist’s daughter-in-law. Across these eleven portraits, Katz paints Vivien in a variety of dynamic compositions unified by a brilliant light blue ground color. With a discerning eye for color, form and economy of line, Katz upholds the immediacy of portraiture while balancing the specific and abstract, intimate and remote, geometric and gestural.” More here.

“Illinois is one step closer to selling the James R. Thompson Center,” reports the Sun-Times. “Two potential buyers for the Thompson Center… have emerged. Both groups submitted proposals to the Illinois Department of Central Management Services,.. But what’s next for the seventeen-story building… remains a mystery. Details of the two proposals weren’t revealed, thanks to a state law that allows officials to keep the submissions concealed until a winning plan is picked.”

Why An “Everything Shortage”?

The Atlantic looks at what’s behind the slowdown of the global supply chain.

Wayman AME Church, which served Cabrini-Green residents for decades and was the backdrop of the October 1992 killing of Dantrell Davis, is for sale again, offered for residential development, reports Dennis Rodkin at Crain’s. “The listing for the Wayman Church parcel says the ‘highest and best use is to replace it with a more modern residential development.'”

In one of the past week’s best takeouts on the Great Chicago Fire, Lee Bey writes about the roots of Chicago architecture today in the fire of 1871. “The fire altered the way we constructed buildings and protected them from fire. The blaze shaped the planning and development of neighborhoods as populations moved to join those who were forming and populating new communities outside of the fire zone… Skyscrapers, fire-resistant buildings, breathtaking architecture and the eye-popping structures of the 1893 World’s Columbian Exposition came in the decades following the fire—and were writ deeply into the city’s genetic code. But, arguably, so was the city’s tendency to clear away entire neighborhoods, often with haste, and build new, to barrel expressways through communities… Said author Dominic Pacyga, professor emeritus of history at Columbia College Chicago: ‘The fire was really Chicago’s first urban renewal project.'”

“Harold’s Chicken Shack, the iconic Chicago fried chicken brand that’s gained national notoriety thanks to celebrity fans like Chance the Rapper, has begun selling its famed mild sauce in supermarkets,” reports Eater Chicago. Outlets include city locations of Pete’s Fresh Markets and Walt’s Food Center in the south suburbs. Writes Block Club: “Fans of Harold’s Chicken and its intoxicating mild sauce now can enjoy the condiment anywhere as [sixteen-ounce] bottles of the tangy concoction have hit supermarket shelves… Harold’s mild sauce has been available online through the company’s corporate site. But most bottles were for restaurant use only, and it was rare someone could buy a bottle for personal use.”

As children head back to school, Pilot Light and WTTW announce the launch of “Food Thoughts,” an animated seven-part series of one-minute videos that will debut on the station today, New episodes will air throughout the WTTW Kids lineup each week through the week of November 15. “Food Thoughts” is an extension of Pilot Light’s work in school classrooms, where pre-K-12 teachers deliver lessons that use food to discuss traditional subjects, including math, reading, history and science. More about Pilot Light here. “Food Thoughts” is available for streaming here.

After passing a city inspection Friday, Guthries Tavern reopened under a new owner, Matt Baldino, who bought the bar earlier this year, reports Block Club Chicago. “He and brother and co-owner Mark Baldino commemorated the occasion by hanging a crisp, new sign mimicking the color and font style of the one that hung above the bar for more than three decades.”

Reflections from The Ankler industry subscription newsletter from pseudonymous “Entertainment Strategy Guy”: If IATSE wins this fight, the streamers will see lower profits while having to somewhat accelerate price increases. But overall, if IATSE wins this fight—and if the other Guilds fight for similar concessions—the bigger impact won’t be about the balance of power between labor and capital (the Guilds and the streamers), but between the labor haves and the labor have-nots. It may not be an accident that IATSE, the least sexy, for lack of a better word, union started this fight. Like the Grubhub food delivery guy, or mom working the night shift driving a Lyft, these are the low-wage foot soldiers without whom their industries would cease to exist. Clearly, they know that, as powerless as their individual voices are, they have the collective power to grind the industry to a screeching halt. And someone’s gonna pay.”

“It’s a matter of days, not weeks,” IATSE president Matthew Loeb told Deadline on Friday. “After four days of bargaining, talks concluded on Friday without an agreement being reached. Negotiations resume Saturday,” the union said in a statement. “While we remain committed to the bargaining process, there will come a point where words must be replaced by action.”

Queer Muslim Romcom Has U. S. Premiere At CIFF

“The Syed Family Xmas Eve Game Night,” a short by director Fawzia Mirza (Newcity Film 50) premieres at one of the shorts programs at the Chicago International Film Festival after its world premiere at the Toronto International Film Festival last month. The short follows a Pakistanti Muslim woman (Kausar Mohammed) who brings her Puerto Rican girlfriend (Vico Ortiz) home for the first time on the family’s annual game night. The short explores themes of sisterhood, belonging, and breaking the rules of tradition. “Bringing a queer, Muslim, Brown, romcom back home to Chicago having just been with it in Toronto, is a dream,” CIFF alum and longtime Chicago resident Fawzia Mirza says in a release. “We need to center stories of our love and joy, made by, starring, written, and directed, by us. Chicago is where I got my start as a filmmaker and I’m hoping Chicago, will fall in love like we have with the entire Syed Family.” More here.

“There’s a moment early in ‘The Storyteller,’ Dave Grohl’s new memoir of a life in music, when a very young-looking teenage Grohl—mullet, overbite, punch-me smile, obvious suburban pedigree—decides to sell his soul to the devil or overlords of rock n’ roll or someone,” reports Chris Borrelli at the Trib. “Basically, anyone who would get him out of Virginia and behind drums for the rest of his life. He stages, in his family’s garage, a seance. With an altar, candles and everything. The root of his convictions: Many summers in Chicago, where he would vacation with his mother and her best friend. One night, that friend’s daughter took him to the Cubby Bear in Wrigleyville to see Naked Raygun. Suddenly, his future was clear. ‘The first day of the rest of my life,’ he writes.”

Created in 1998 to connect Chicago audiences with the widest possible range of today’s new music, the CSO MusicNOW series starts November 1 with a concert at Symphony Center celebrating contemporary composers with Chicago ties. Titled “Homecoming,” the program presents the world premiere of a new CSO MusicNOW commission from Elijah Daniel Smith, recent works by Ted Hearne and Nathalie Joachim, and vocal compositions by series curator Jessie Montgomery, who begins a three-year tenure as the CSO’s composer-in-residence. The performance features guest artists including soprano Whitney Morrison, a Chicago native and recent alumna of Lyric Opera of Chicago’s Ryan Opera Center, with musicians from the Chicago Symphony Orchestra. Michael Lewanski, the conductor of Chicago’s Ensemble Dal Niente and Curatorial Director of the city’s Ear Taxi Festival 2021, leads the works by Smith and Hearne. More here.

The Second City says Niki Moran, a fixture from 2002-2008, who was known in Chicago as Niki Lindgren, reports the Sun-Times, approached her life and her three-year cancer battle with “a limitless capacity for laughter.”

The University of Chicago has received a bequest of $50 million from the estate of Arley D. Cathey, an alumnus and school patron who died last year at the age of ninety-three, reports the Sun-Times. “The University of Chicago is deeply grateful to [Cathey] for his generous support of undergraduate education,” said university President Paul Alivisatos in a release. “His bequest emphasizes the importance of UChicago’s transformative education and the university’s unwavering commitment to ensuring access for talented students worldwide.”

The only known “Shoeless” Joe Jackson signed photo of himself in existence goes for $1.47 million at auction, reports WGN-TV.

The Board of Trustees of the Chicago Zoological Society has named Michael Adkesson, DVM, MBA, Dipl. ACZM & ECZM president and CEO of the Chicago Zoological Society and Director of Brookfield Zoo. Cherryl Thomas, chair of the board of trustees says in a release, “With his strong background in veterinary medicine, science, research and conservation and his training and experience in business and management, we are confident he will ensure Brookfield Zoo stays at the forefront of conservation, that it continues to be a beloved place in the hearts and minds of our visitors, and that he will take the organization forward into the future.”