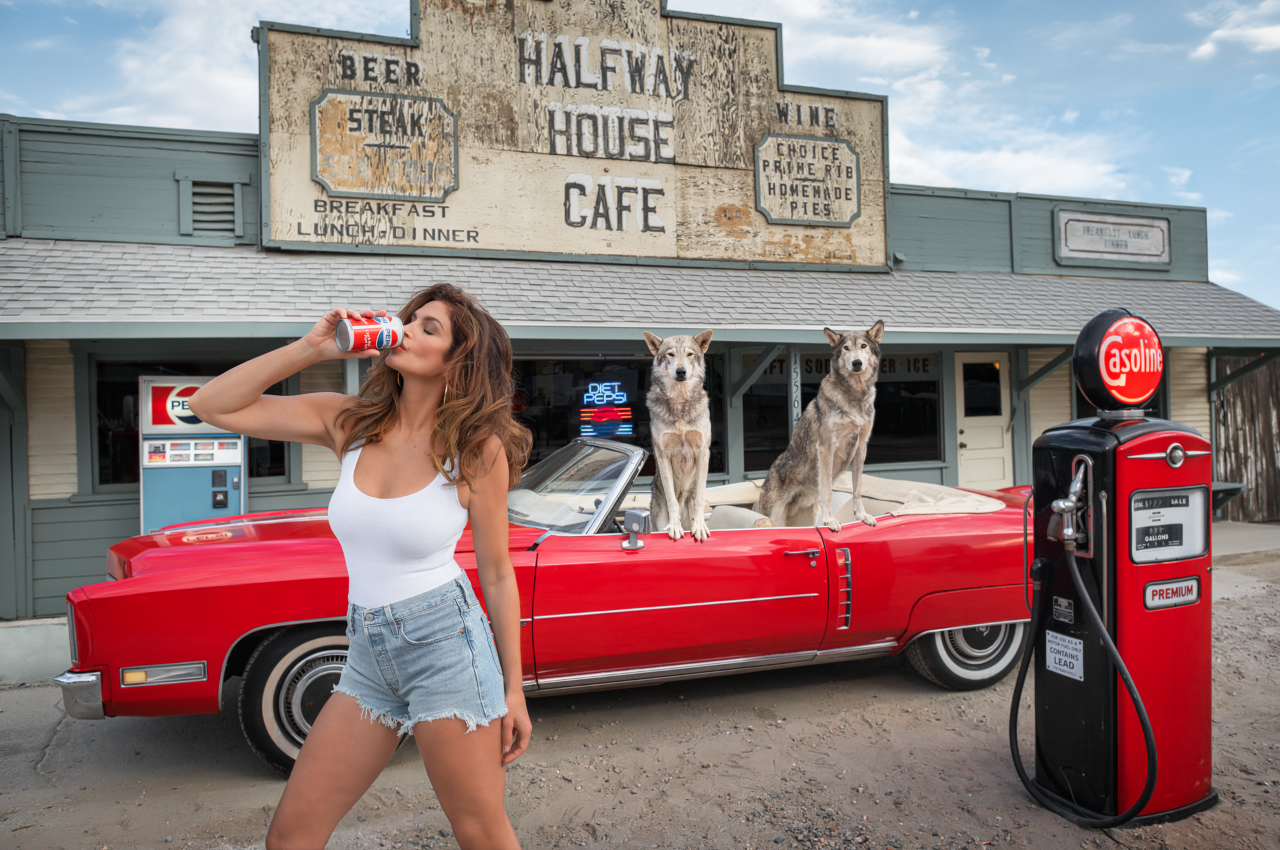 Model Cindy Crawford and nature photographer David Yarrow present “Changing Lanes” at Hilton l Asmus Contemporary in Bridgeport from October 13–January 22. (All proceeds benefit children’s cancer research, for which the duo have raised more than a million dollars.) Yarrow is a collaborator of names like Cara Delevingne, Tom Brady, Chris Hemsworth, Leonardo DiCaprio and Martin Scorsese, and his exhibition presents his latest work, which includes photographs featuring Crawford with wolves and a re-creation of the Pepsi advertising from the last century, which featured her in 1992. More here.

The Neubauer Collegium gallery presents the exhibition, “Ida Applebroog: MONALISA.” from October 14-January 16. The exhibition features an installation by American artist Ida Applebroog, the gallery reports, “a pivotal figure in the feminist revolution that rocked the art world of the 1960s and 70s. A room-sized wooden structure covered with ink drawings of the artist’s own vagina, ‘MONALISA’ is one of Applebroog’s most emblematic works. The drawings, made during a transformative period in the artist’s life in the late 1960s yet only accidentally rediscovered in the late 2000s, could be said to have birthed the artist we know today. Over the course of a two-month period in San Diego in 1969, Applebroog (then known as Ida Horowitz) suffered an existential crisis. She was keen on exploring her burgeoning artistic interests and instincts, which had acquired a strongly feminist cast during her studies at the School of the Art Institute of Chicago. A housewife and mother of four, she spent long hours taking refuge in the sole site of solitude available to her in an otherwise busy household: the bathtub. It is there that she set about meticulously drawing likenesses of her vagina, which varied greatly in detail, veering from the anatomical precision of ‘Our Bodies, Ourselves’–styled textbooks to the haiku-like elegance of Matissean curves. ‘MONALISA’ is closely aligned with several curatorial concerns in the Neubauer Collegium’s evolving exhibition program, notably the literalized notion of art as a ‘room of one’s own’– both refuge and retreat.” More here.

Corbett vs. Dempsey presents “Controlled Burn,” an exhibition of twelve new paintings by Celeste Rapone. This is her first solo show at the gallery and will be on view October 16-November 13. “Rapone’s paintings focus on a singular protagonist, their bodies shown complexly situated within thematically specific contexts and scenarios,” writes the gallery. “Throughout, the artist’s sensitivity and invention with pattern and surface emerges, often in opposition with the organic human form. In a group of brand new canvases, Rapone opens up the space in her detailed compositions, situating figures in an architectural or natural scene. Still figurative and populated by a range of evocative characters, they are now less claustrophobically compressed, the settings providing a theatrical context for morphological feats, sly mass-cultural references, and luscious paint application. Rapone started work on the paintings in this exhibition in what she candidly calls ‘the clusterfuck of January, 2021’ with no specific trajectory in mind, but over time they revealed themselves to be more about painting itself than anything thematic or topical.” More here.

Axios Chicago looks at the controversy. “All of the focus has been on the statue in Grant Park, but it’s the neighborhood statues of Columbus that [the group] wants back on display.”

“Business partners Alex Haried and Ryan Phelan bought Little Joe’s in February 2020. Haried called it ‘the worst timing possible’: They dealt with broken furnaces, a pandemic and expensive attempts to stay open throughout the lockdowns. They fully reopened their bar, 1041 West Taylor, earlier this year,” reports Block Club Chicago. “The new owners decided to preserve the dive bar feeling they loved so much growing up, but they also introduced changes to make sure the bar was for the whole community.”

“Ian Rusnak and Eric Safin, the chef-owners of the new Elina’s [at 1202 West Grand] have worked in dozens of restaurants—steakhouses, Chinese restaurants, cafes, high-end spots with Michelin stars,” reports Eater Chicago. “But when they finally opened their own place, they decided on a small neighborhood joint where they would run the kitchen themselves, cooking the sort of comfortable Italian-American classics that they hope will make people want to come back again and again: chicken and eggplant parmesan, rigatoni a la vodka, linguine and clams. There’s also ribeye steak and Dover sole for special occasions, because sometimes it’s nice to celebrate right in your neighborhood.” The twenty-eight-seat space is currently BYOB.

Yolonda Ross, star of the Showtime series “The Chi,” has announced a donation of $100,000, funded by The Joseph and Bessie Feinberg Foundation, to three grassroots organizations serving women of color who are living with breast cancer. “Based on personal life experiences and in tandem with her performance as ‘Jada’ on ‘The Chi’—a single black mother diagnosed with breast cancer—Ross was inspired to get involved in Chicago’s WOC breast cancer survivor community and collaborate with three Chicago organizations ( The Center for Health Equity Transformation, Equal Hope and the Tatisa C. Joiner Foundation) that support women’s health.” In celebration of the women in the WOC breast cancer survivor community, the nonprofit organizations and the $100,000 donation, an event will be held at Hilton | Asmus Contemporary, 3622 South Morgan on Saturday, October 30 from 11am-2pm. The event will unveil five large-scale photographs of breast cancer survivors, entitled “Beauty is Me,” photographed by Ross herself. Rhonda Feinberg and Ross will officially award the $100,000 that will be distributed between the three organizations, and will discuss the gift. Tickets and more here.

The American Writers Museum (AWM) welcomes audiences back for in-person events. A book launch event for TikTok star Joanne Lee Molinaro’s “The Korean Vegan: Reflections and Recipes from Omma’s Kitchen” is at the AWM tonight, October 12 and a discussion with “The Writer’s Crusade” author Tom Roston about Kurt Vonnegut‘s life and his novel “Slaughterhouse-Five” is slated for Friday, October 15. The AWM will also broadcast programs online, live, for those who are unable to attend. More here.

Author Amy Tan will receive the 2021 Carl Sandburg Literary Award from Chicago Public Library and the Chicago Public Library Foundation. The Arts Award, which celebrates the power and impact of Chicago’s artistic community, will be presented to globally recognized artist and social innovator Theaster Gates. Raised on Chicago’s West Side and trained in urban planning, sculpture and performance, the foundation relays in a release, “Gates’ work demonstrates the impact of ambitious cultural initiatives and interventions in Black space, most notably through his work on the Southside with his organization Rebuild Foundation.” Actor, author, director, playwright and educator J. Nicole Brooks will receive the 21st Century Award, which honors significant recent achievements by a writer with ties to Chicago. A powerhouse in Chicago’s theater scene, Brooks is an ensemble member and Mellon Foundation Playwright in Residence at the Lookingglass Theatre Company. Since 2000, the Library Foundation Awards has honored inspiring authors and artists while raising critical funds to advance Chicago Public Library programming and resources. The 2021 honors will be given at the annual Chicago Public Library Foundation Awards through a broadcast via YouTube on Tuesday, November 9 at 6pm. More here.

“My expectation is, by the time we get ready to close [the deal], we’re probably going to have in the neighborhood of 40 or 50 open positions that we need to fill,” Chicago Public Media CEO Matt Moog tells Mark Jacob at Local News Initiative. “This is emphatically, without reservation, this is investment in growth. If we look forward years in the future, I am very optimistic that the newsroom will be larger than it is today and that we’ll continue to be able to hire more staff across the organization… Our goal is to keep the paper as healthy and with as broad a circulation as many days a week as possible for as long as possible. We view it as an important part of the mix, and there’s certainly many households in Chicago who value the role that it plays. We are well aware that other newspapers are experimenting with other schedules. But we don’t have any specific plans to reduce the schedule.”

Museum Of Broadcast Communications Highlights A Century Of Radio

Jingle Ball 2021 Rings In The Season With Annual Holiday Concert

The American Composers Forum (ACF) has announced premieres of music commissioned through its two-year partnership with the Chicago-based, internationally renowned Association for the Advancement of Creative Musicians (AACM). “Supporting the creation of music by The Honorable Elizabeth A. Baker, Adegoke Steve Colson and Rudresh Mahanthappa, this is the first time the AACM has collaborated with another organization to commission artists,” the group reports in a release. “The concert of world premieres will be performed by the AACM’s iconic Great Black Music Ensemble (GBME) and celebrates the fifty-fifth anniversary of the AACM.” The event will be at the Logan Center for the Arts, 915 East 60th, the AACM’s longtime partner, on Saturday, October 30 at 7pm. Tickets are free with required reservations, and are available here.

The Music Institute of Chicago celebrates the tenth anniversary of its Jazz Studies program with an in-person performance Saturday, November 13 at 7:30pm at Nichols Concert Hall, 1490 Chicago Avenue in Evanston and via livestream. The concert features a world premiere commission by jazz saxophonist and clarinetist Victor Goines and showcases acclaimed musicians who teach in the Jazz Studies program. More here.

Lookingglass Theatre Company is releasing “50 Wards: A Civic Mosaic,” an ambitious, arts-forward response to the constraints of the pandemic and the needs of our current cultural climate. The first five of fifty short films, conceived by members of the company’s artistic collective, will premiere on Wednesday, October 13 at 8pm for free. “Practiced in connection, our artists hit the pavement with cameras, curiosity, and storytelling savvy to explore a series of multi- and mixed-media pieces from each of the city’s fifty municipal parcels,” Lookingglass says in a release. All pieces are original works that have been developed by ensemble members Kasey Foster, Kareem Bandealy, Phil Smith, J. Nicole Brooks with Latesha Dickerson and artistic associate Matthew C. Yee. More here.

Stephanie J. Block will headline Skylight Night 2021, an annual fundraiser supporting Skylight Music Theatre on Saturday, November 6. Skylight is Milwaukee’s professional Equity music theatre company entering its sixty-second season. The event will be held in the main ballroom of the Woman’s Club of Wisconsin. The gala evening includes cocktails, dinner, and a concert. In a show she calls “Back in the Spotlight,” Block will perform some of her favorites, including signature songs from her starry Broadway career. “The concert will be my love letter to the world of music theater, which we have all missed so deeply since March of 2020,” says Block in a release. More here.

The sale of more than 170 lots of Al Capone’s detritus was estimated to fetch near $700,000 total, but climbed much higher with bids from around the world, reports Kori Rumore at the Trib. The “sale of Chicago gangster Al Capone’s belongings, which remained in the possession of his family for almost seventy-five years after his death, garnered more than $3 million.” The highest-priced item, at $860,000, was the criminal’s favorite Colt .45-caliber semi-automatic pistol, “more than $700,000 above the highest estimate. Its buyer is unknown… but whoever purchased the gun will pay $1,040,600, which includes the twenty-one-percent buyer’s premium.” These are the top ten bids.

Northwestern University Names Rebecca M. Blank As Next President; Will Be First Woman In That Role

Northwestern University announced that Rebecca M. Blank will be the next president of the school, beginning next summer, reports the Trib. “Blank is a well-known economic researcher on poverty and low-income labor markets, according to a news release announcing the move. She most recently was the chancellor of the University of Wisconsin-Madison… With the appointment, Blank will be the first female president of Northwestern University. ‘I am honored and delighted to accept the job as Northwestern’s next president,’ Blank said in the news release. ‘Northwestern is a school that I have known and admired for years. Its reputation as a top-rated educational and research institution has grown each decade. It will be my mission to make sure the institution’s reputation and quality continues to accelerate.'”