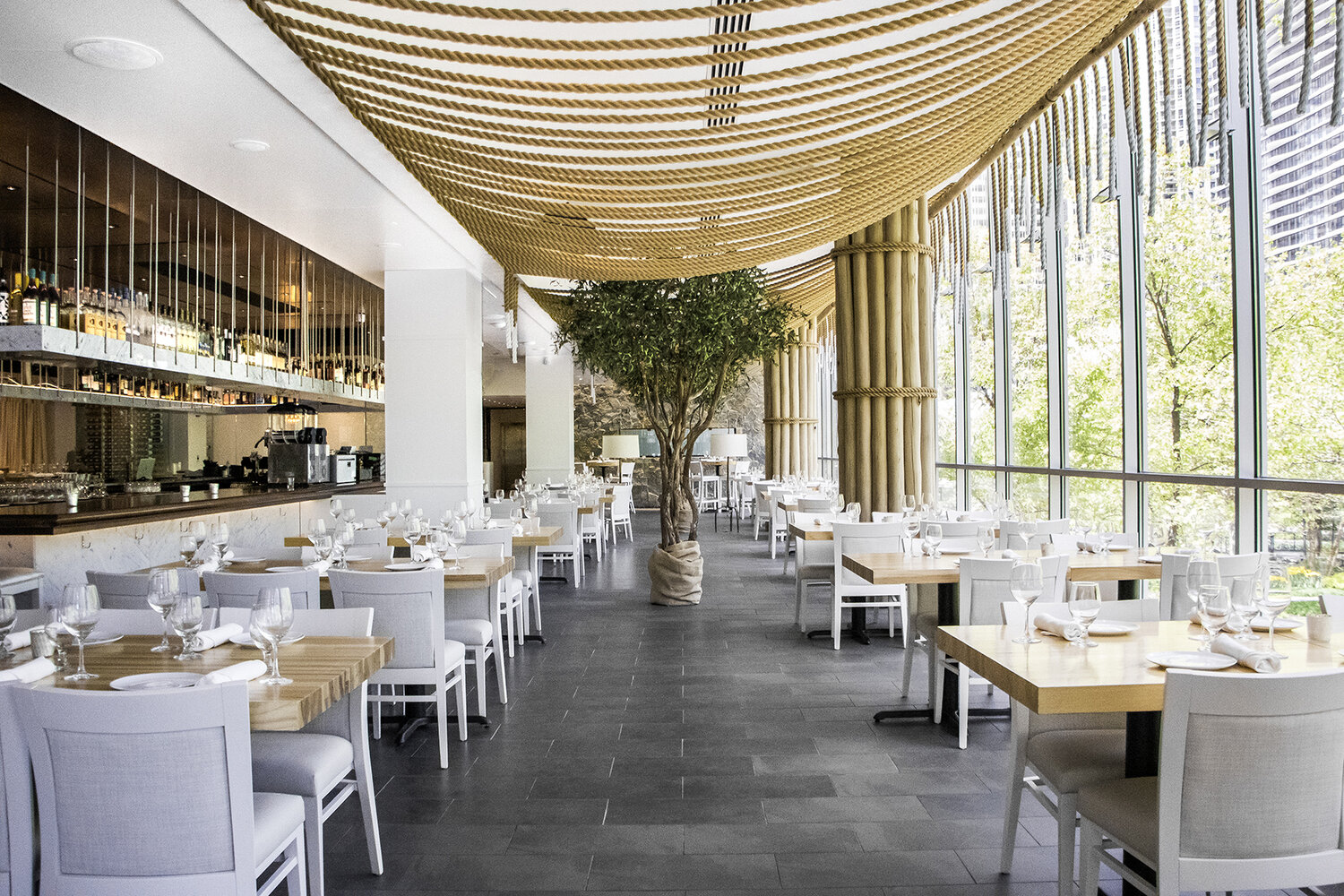 Avli on The Park

“Suffering its fourth consecutive quarter where vacancies have hit a record high, brokers for downtown office space shared the pain and optimism harnessed in what has been another difficult year,” reports WGN-TV. “Market watchers have said the state of downtown office space is still on life support as of the third quarter of 2021. As many workers remain at home, buildings have remained cold during the pandemic… ‘The first quarter of 2020, we broke a record for the most leasing volume that we’ve ever had in the history of Chicago. In the third quarter, we broke a record for the least amount of leasing volume,'” Matt Carolan of JLL, a global real estate company told WGN.

Extended funding for the redevelopment of the remaining parcels of the former Cabrini-Green homes has been approved by the Community Development Commission, reports YIMBY Chicago. “The first of the two, separate vacant parcels sits on the corner of North Larrabee and North Clybourn, replacing the recently demolished Near North Career High School. The second parcel, just south of the first, sits on the northeast corner of West Division and North Halsted beside a Target that was also developed on former housing property.”

Avli On The Park, the contemporary Greek restaurant, has launched its happy hour on its large rooftop every Tuesday to Friday from 4-6pm. The menu features small bites like the filo shrimp ($6) and housemade spinach pie ($7), along with spreads (hummus, taramasalata), salad and dessert. Specialty beer, cocktails and Greek wines on special are available. The full happy hour menu is here. The rooftop patio can accommodate about a hundred guests, with a beautiful view of Lakeshore East Park. The rooftop will be open for cold weather dining with fireplaces and heaters throughout. More here.

“Disruptions related to the pandemic have been affecting the global supply chain,” reports CNN. “There’s been gridlock at the Port of Los Angeles, where shipping containers holding products… have been stuck offshore. Alcohol is among those products…”

McDonald’s workers in at least ten cities, including Chicago, are staging a one day strike to protest what they call a culture of sexual harassment and violence, reports WGN-TV. “The protesters will gather outside McDonald’s Chicago headquarters on Tuesday. The group will ask workers to unionize to help fight sexual harassment and discrimination in the workplace. Organizers say workers have been sounding the alarm for years. McDonald’s has pledged it would require all workers to undergo anti-harassment training.”

After almost half-a-century in business and an ownership change, Bridgeport Bakery is closing, reports Block Club Chicago. “The beloved seller of paczki, bacon buns and other sweet and savory pastries is closing.” Its last day is Sunday, 5am-3pm. The bakery at 2907 South Archer is closing after “an unforeseen situation and financial hardship.” An addendum on the Bridgeport Bakery 2.0 Facebook page: “If anyone know about the business attorney, he may help me to save the bakery.”

Some IATSE members don’t love the contract they might vote against: “The sharply differing points of view offer a window into the changing dynamics inside the union that represents camera operators, makeup artists, set decorators, editors, grips and others who work in below-the-line Hollywood,” reports the Los Angeles Times. “Crew members and labor experts say the fissures reflect a widening divide between younger activist workers, who aren’t shy about making their demands public on social media, and veteran union leaders who have traditionally avoided confrontations with studios—and kept dissidents in line.” Another factor: calls for stronger safety rules to protect film workers after the on-set death of cinematographer Halyna Hutchins. At a memorial for Hutchins in Burbank on Sunday night: “We’re here to mourn,” said IATSE Vice President Michael Miller, who is also director of motion picture and television production, “But I’m afraid we are also gathered with some frustration and a little bit of anger. Anger that too often the rush to complete productions and the cutting of corners puts safety on the back burner and puts crew members at risk.” Reports Josh Eidelson at Bloomberg: “IATSE members say time abuses seemed just baked into the job, until time home with families shifted their perspective, social media discussions heightened their agitation, and the overwhelming strike authorization vote gave them a new sense of strength.”

“Chicago is home to the oldest… occult shop in the United States—and it’s looking to expand,” reports Block Club Chicago. “The Occult Bookstore opened on the Near North Side under occultist D.G. Nelson in 1918 with a mission to serve spiritualists, occultists and shamans. It moved a few times over the years before settling in a storefront at 2032 West Grand.” There was “another change in 2019, when it was recognized as a non-profit church, the Occult Spiritual Society. But Occult’s mission remains the same: to be a magical and mystical resource.”

Can journalism save five acres of the world? Tweets Trib columnist Rex Huppke: “There’s a five-acre patch of pristine prairie in Illinois that needs saving. So I told the airport officials planning on bulldozing it I’ll make them famous if they shock the world and do the right thing.” From Huppke’s column: “I’m offering members of the Chicago Rockford International Airport board a chance to make themselves famous. A chance to do something wholly unexpected in this day and age: The right thing. Surrounding the Winnebago County cargo airport is the Bell Bowl Prairie, a frozen-in-time natural wonder that shows… what Illinois once looked like when it was prairie land teeming with native plants and proper insects and critters… The airport is expanding so it can ship more of the things we need and surely a good number of things we don’t need but want to buy anyway. That expansion, on Nov. 1, will lead bulldozers right over the Bell Bowl Prairie. When natural prairies meet bulldozers, the bulldozers always win. And we, who should be stewards of the prairies, lose.”

The Chicago Symphony Orchestra Association (CSOA) has announced free access to content on its CSOtv video portal. Audiences in Chicago and worldwide will be able to connect with the artistry of the Chicago Symphony Orchestra in episodes of the critically acclaimed “CSO Sessions” series, introduced in October 2020, as well as the CSO for Kids and Civic Orchestra of Chicago series and archival concert performances. Six new episodes of “CSO Sessions” will be released on CSOtv throughout the 2021-22 season, with Episode 23: “Ortiz, Villa Lobos & Ginastera” premiering on October 26. The CSOtv portal has been upgraded to provide an improved user experience. More details here.

“Last year, 69% of works performed by the fifty largest ballet companies—including Joffrey and Hubbard Street—were choreographed by men. Women in dance are trying to change that,” the Trib headlines Talia Soglin’s report.

The Theatre School at DePaul University has announced Omer Abbas Salem as the awardee for the 2021 Cunningham Commission for Youth Theatre. Salem will write a play for families and young audiences that focuses on assimilation, a major theme in his work, DePaul relays. “The idea for the play originated from a podcast about two children of Woolpit who arrive in a British town in the twelfth century with no explanation of their past. After the children acclimate, they learn to speak English and are able to tell townspeople more about their lives. One child assimilates, and the other child does not. The story explores the conscious and unconscious consequences of changing to fit into the larger culture and what can catalyze that process.” The Cunningham Commission for Youth Theatre was established at The Theatre School to honor the memory of the Rev. Donald Cunningham, a Chicago priest, playwright, and lover of theatre. “The purpose of the commission is to encourage the writing of dramatic works for young audiences that affirm the centrality of religion, broadly defined, and the human quest for meaning, truth, and community.”

The Luminarts Cultural Foundation supports Chicago’s arts community by supporting young artists through programs that offer financial awards, artistic opportunities and mentoring that bridges the gap between education and career. This year’s Luminarts fellow in ballet is Andre McGregor, who is part of the trainee program of the Joffrey Ballet. He is training with the Joffrey Academy of Dance on his way to a dance career.

The annual benefit for American Blues Theater will be a costume party with live entertainment at the American Blues Theater rehearsal space, 4809 North Ravenswood on October 29 and via Zoom. Featuring cocktails, prizes and live music from beyond the grave with musical host “Bloody Holly” (artistic affiliate Zachary Stevenson) and with performances by ensemble members and other artistic affiliates. Guests are encouraged to wear costumes, and prizes will be awarded for those who dress as their favorite musicians from beyond the grave. Artistic director Gwendolyn Whiteside says in a release, “After nearly a decade of our annual fundraiser GutterBall, this year we’re retiring our bowling shoes and putting together our best tribute costumes. This fundraiser is led by the artists of American Blues in support of their artistic home. And thanks to the generosity of the Queen of Hearts, every donation will be matched dollar-for-dollar, up to $25,000.”

The Chicago-based Gaylord and Dorothy Donnelley Foundation—an organization that offers unrestricted grants to 175 small arts organizations in Chicago with budgets under $1 million—surveyed ninety-one of its performing arts grantees to get insights on obstacles that may prevent organizations from returning to live performances. “While 56% of organizations surveyed will return to producing in-person seasons this fall, 27% are unable to welcome audiences in-person, and 16% remain uncertain about returning to the stage this fall due to ongoing uncertainties.” David Farren, executive director of the Foundation says in a release, “It has been a year-and-a-half since Chicago enforced its stay-at-home order, and yet, there is still much uncertainty surrounding when our community will be able to fully engage with our neighborhood cultural treasures once again. While we are thrilled to see the gradual resurgence of Chicago’s performing arts scene, many of our city’s neighborhood arts organizations are still in the same difficult positions they were back in 2020, reminding us that we all must do more to support those unable to return to in-person this fall.” Much more here.