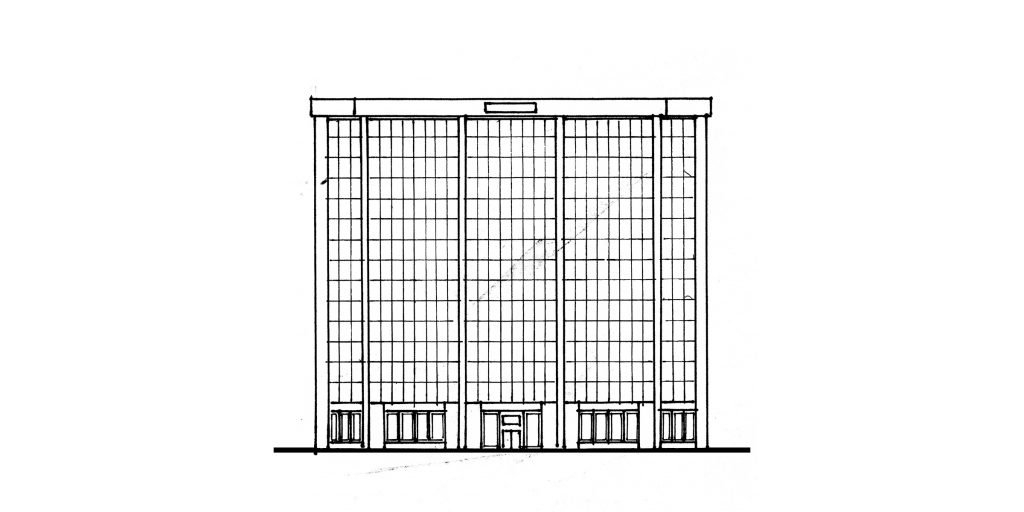 The little girl is chasing bubbles among the iron sculptures in the south end of Grant Park. It is an overcast early October afternoon in Chicago but that does not matter to all of the brilliant possibilities the girl’s mother is waving out of a magic wand. The clear bubbles are amazing. There and gone. 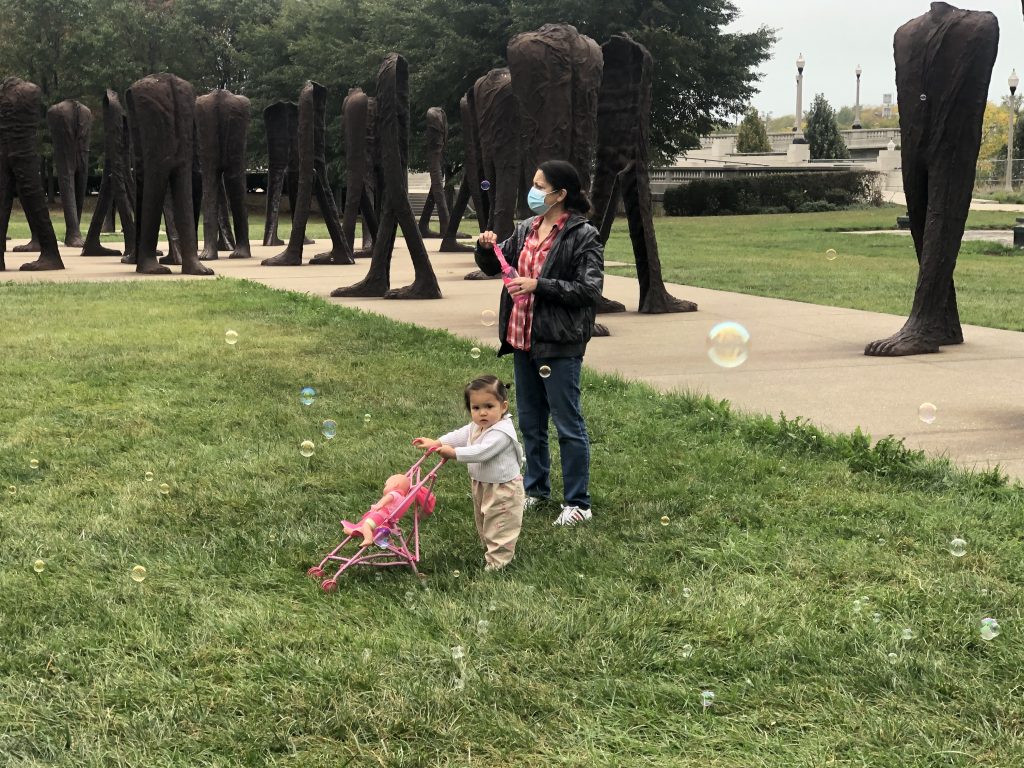 The 106 headless park sculptures are known as “Agora”—the name for the urban gathering places of ancient Greek civilization. The public art installation is across the street from what I consider to be one of the most important cultural sites in Chicago.

The Illinois Central railway station known as Central Station sat at the corner of Roosevelt Road and South Michigan Avenue between 1893 and 1972. It was the arrival point for the Great Migration (1916-1970). Future artists, athletes, chefs, clergy, dreamers, grifters, laborers and musicians arrived at the station known for its thirteen-story clock tower. New times helped shape the soul of Chicago.

The City of New Orleans was known as the “Main Line of Mid-America.” With the southern point in New Orleans, the streamlined Pullman cars stopped in Canton, Jackson and McComb, Mississippi, Memphis, Tennessee, North Cairo, Illinois, and St. Louis, Missouri. The main line was a gateway to possibility. 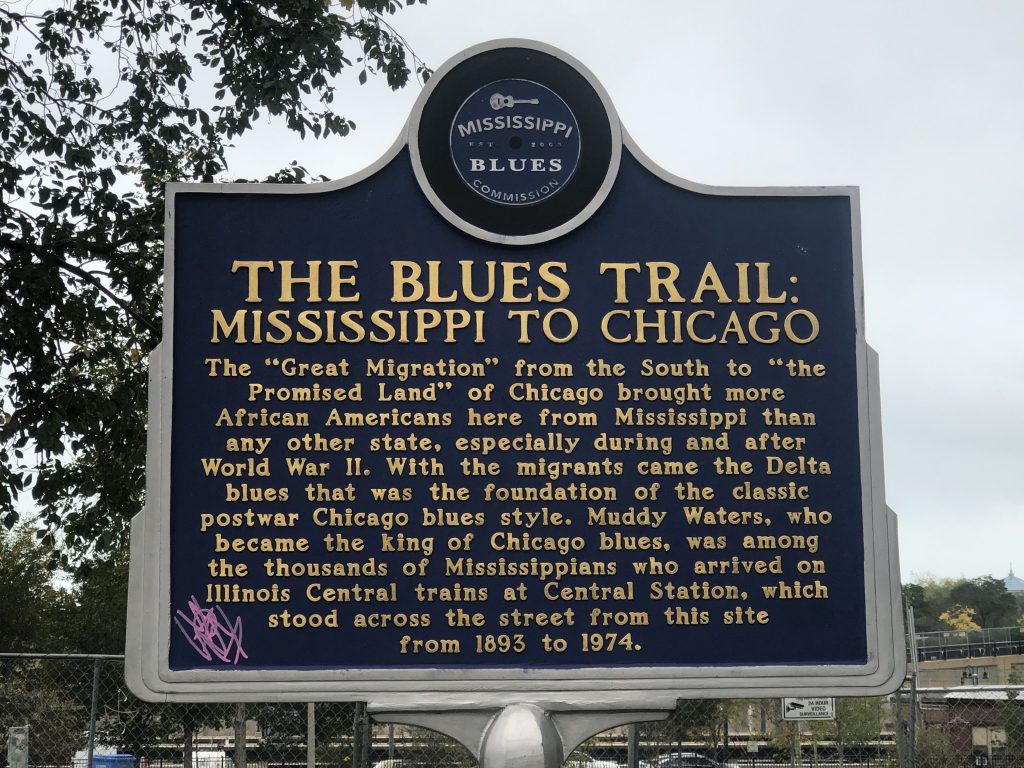 The marker off in the distance of Grant Park citing the importance of the old Illinois Central Station./Photo: Dave Hoekstra

In the southeast fringe of Grant Park, there is a tall blue-and-gold marker honoring “The Blues Trail: Mississippi to Chicago” that cites the influence of Delta blues on the classic postwar Chicago blues style while noting that these artists arrived at Central Station across the street. The marker was placed by the Mississippi Blues Commission and not by any Chicago cultural entity.

Central Station closed in 1972 and was demolished in 1974. There and gone. Today, an Aurelio’s Pizza stands at the corner of Roosevelt and South Michigan. If you look hard enough there is a faded brick in the sidewalk in front of the pizzeria that says “Illinois Central Station.” It resembles a gravestone. But then you see the little girl weaving and bobbing through the statues across the street. Rebirth.

Her mother says the girl’s name is Luna. She is sixteen months old. Luna takes breaks from her afternoon workout to faithfully push a doll in a pink baby carriage. Luna is happy among the nine-foot-tall sculptures that were designed and made at a foundry in Poland. Luna’s family came to Chicago from Bogotá, Colombia. You tell the mother you once had a magnificent lunch atop the mountain of Monserrate in Bogota. The mother says, yes, the mountain reaches to the heavens. This young family’s story of migrating to Chicago and chasing dreams is similar to those of the intrepid travelers who came to Chicago years ago across the street.

I look to my left and look to my right. What did the eyes of the Great Migration see when they landed on this spot? Was there excitement and fear like the first time you fell in love? Did they bring the family Bible and a friendly guitar? Did they hear Marian Anderson sing “Oh! What a Beautiful City” (1940) with three gates in the east and three gates in the west? I stand alone and wonder.

The site of the Central Station stands on its own as one of the most historic places in Chicago, but the deal is sealed with a short two-block walk south to the site of the old Vee-Jay Records and Brunswick Records, 1449 South Michigan. Vee-Jay operated from this building between 1960 and 1966 and Brunswick from 1966 to 1976. Seminal Black artists like Gene Chandler, the Chi-Lites, John Lee Hooker, Jimmy Reed and many others recorded here. The Beatles’ 1964 debut “Meet the Beatles” was distributed on Vee-Jay from 1449 South Michigan. I argue that these two blocks on South Michigan Avenue are one of the most important twentieth-century musical corridors in America. 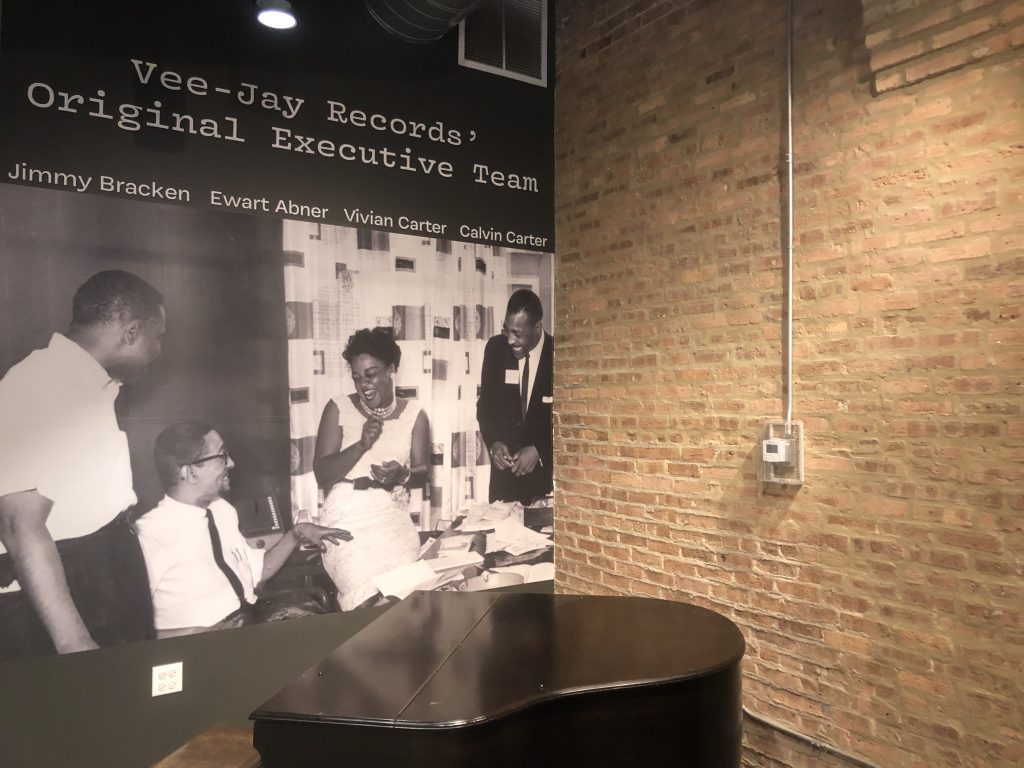 The kind folks at Overflow Coffee have repurposed the main floor of the two-story Vee-Jay/Brunswick building into a sleek coffee shop and meeting place. Jackie Wilson recorded his smash “Higher and Higher” for Brunswick in this space. Little Richard landed at Vee-Jay in 1964 and 1965. Vee-Jay album covers from Eddie Harris, the El Dorados and the Four Seasons line the coffee shop’s north wall as a nod to the building’s legacy.

In October 1992, Mayor Richard M. Daley declared a Vee-Jay Day in Chicago. The Staple Singers recorded “Uncloudy Day,” their first gospel hit in 1962 with Vee-Jay and patriarch Pops Staples felt the recognition was overdue, like a train to the city. Pops migrated to Chicago from Mississippi in 1925 to work in the Union Stockyards. Of the Vee-Jay recognition, Pops, who was seventy-seven, told me, “It may not come on time when you want it, but it will be on time.” 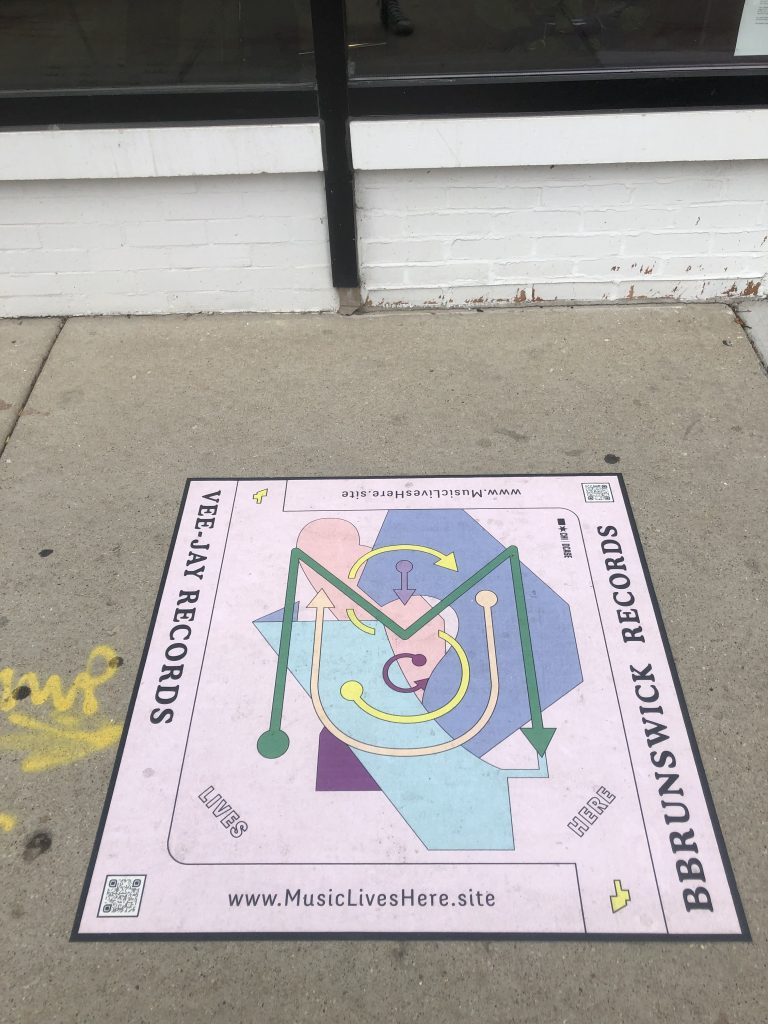 The Vee-Jay site also was chosen as one of fifty important Chicago music sites in the multimedia DCASE (Department of Cultural Affairs and Special Events) “Music Lives Here” initiative. Here is a link to the “Music Lives Here” road map: musicliveshere.site (Disclaimer—I was a member of the selection committee.) Vee-Jay was once the largest Black-owned label in the United States, pre-Motown. I ask the young barista if customers inquire about the building’s deep history. “They did when we first opened (early 2021) but not so much now,” she says.

History can be fluid. Sometimes history is in the eye of the beholder. But from understanding where we were, we learn that anything is possible moving forward. And life, even with its clouds, life can be hopeful.

Just keep dancing in the shadows of the sculptures.