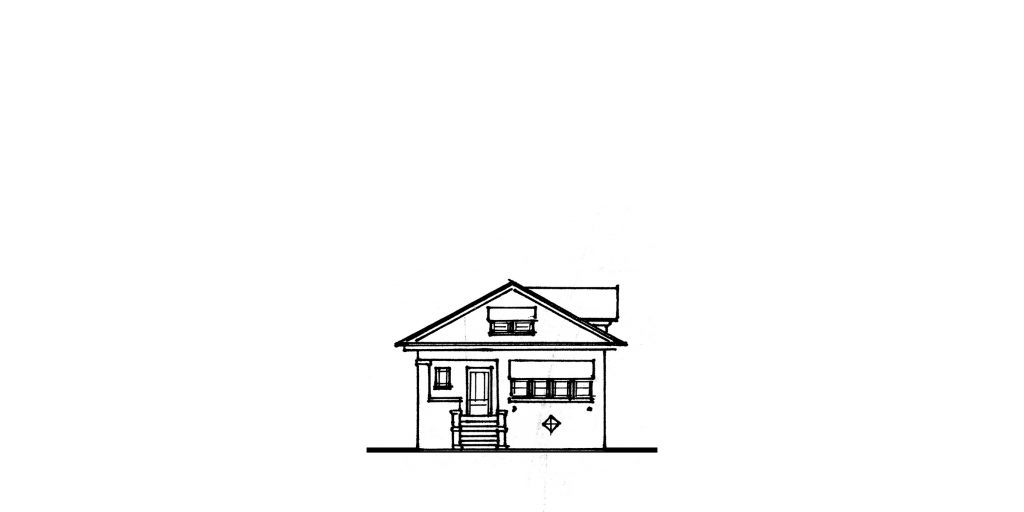 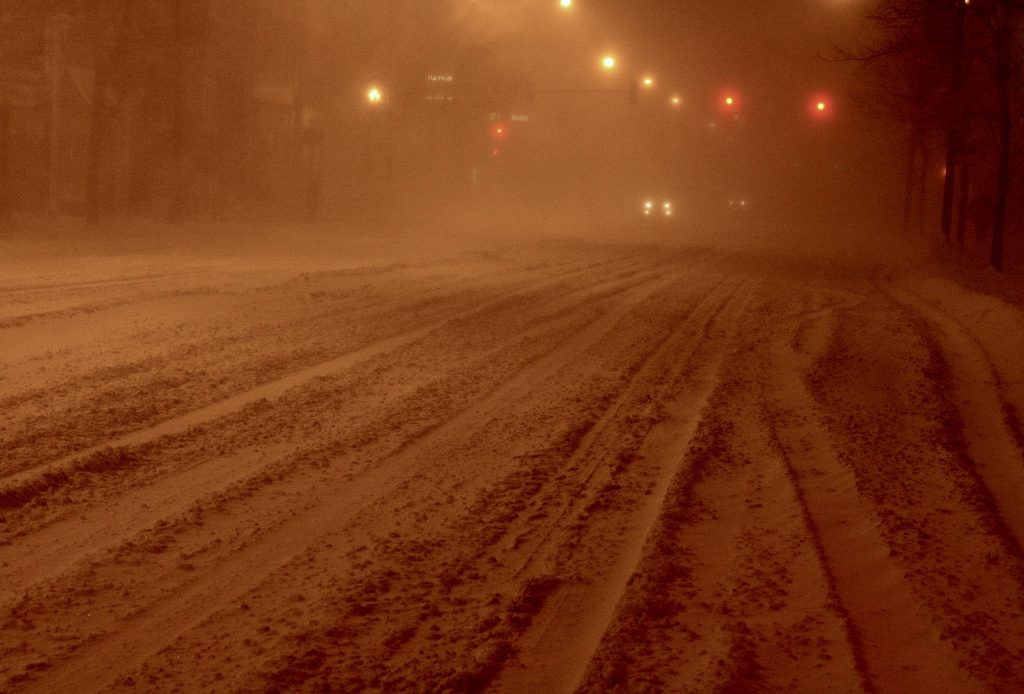 Lost or passing Chicagos: spending the versatile potato; red, red neon; flocking, blurring, mounting snow. These blur when I don’t sleep. Emblems, starkly romantic when just out of college: tucking into the dark corners of bars and clubs; discovering perfect, simple food; a neon kiss unmoored from pop art. Contrasts and textures. Cold and warm. Urban bestiary swaddled under blankets of the night and snow.

Magikist lips. These defunct neon signs stood tall and pursed, silent, red, fiery, they puckered by day and night along the Eisenhower, the Kennedy, astride the Edens, the Dan Ryan. There’s little evidence of them now: a few seconds in “The Blues Brothers” one garish glory on a street of neon on Randolph near State Street. I see the one along the Eisenhower against a cloud-tufted brightest-blue summer Midwest sky; Loop lips damped with heavy, wet snow, twentieth-century slush.

Snow from the era of stories-high neon: the way-past-inclement Chicago and Lake Michigan snow that used to flurry unhurriedly and wet the world. Snow that time I was mistaken for someone whose leather jacket I had borrowed and was thrown backward into a (defunct) Howard Street bakery’s picture window, head brushing the icing-pink neon sign without injury. Indecently clean snow all the length of the alley that led from Clark Street to neon-beckoning Neo (defunct) as “Love My Way” played between openings and closings of the door. Reflections and shadows of snow refracted via human-scale foyer mirrors (defunct) along a deserted late-night Michigan Avenue peopled with darkened first-floor stores.

“The snow fell in a soft, suspended motion, as snow does in dreams alone.” Nelson Algren ascends into a dream in “The Man With The Golden Arm”: “He coasted without effort around and around and down a bit and then up like that kite with the broken string and came coasting, where all winds were dying, back down to the table where Fixer sat waiting. ‘I got no woes,’ he laughed among slow-falling flakes, seeing Louie smiling through the snow. ‘You got a woe, Fixer?’ he asked. ‘It’s what I been needin’—a couple good old secondhand woes.’” 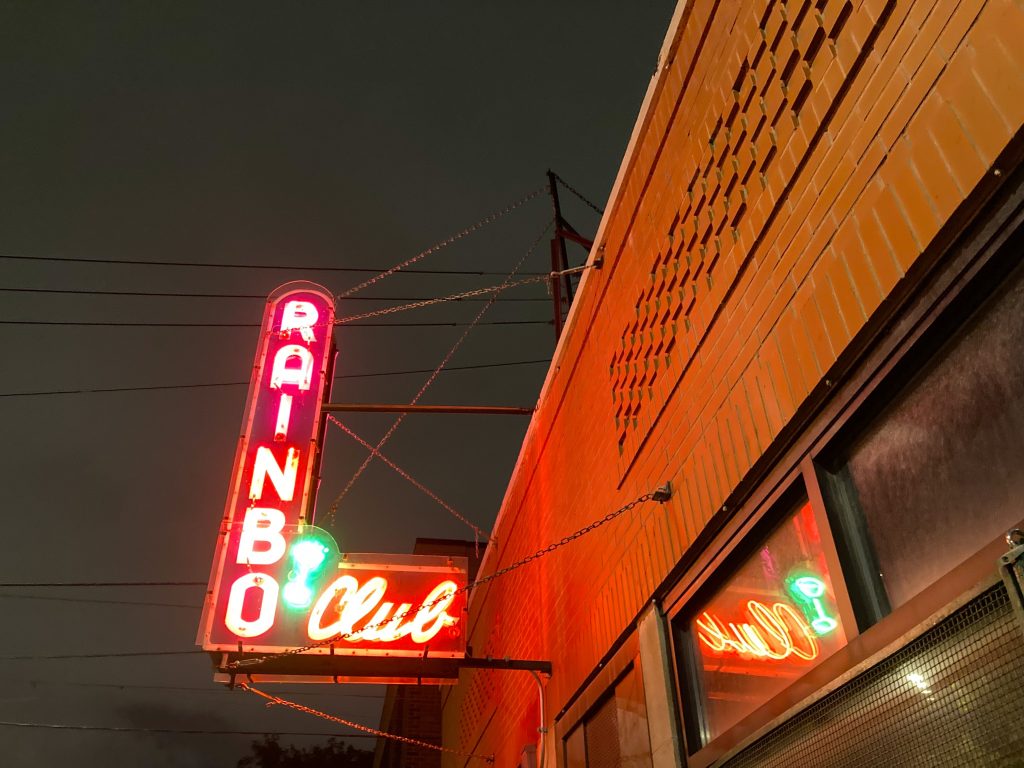 Woes is who? A blade of antiquarian neon still stands arrow-tall outside Ukrainian Village’s single-story flat-roof Rainbo Club (1150 N. Damen), thirty-five years under the same ownership. Algren gets wrongly referenced for that place, built in the 1930s a few years before W. H. Auden’s “September 1, 1939,” lines from which can overlay that haunt. “Faces along the bar / Cling to their average day: / The lights must never go out, / The music must always play, / All the conventions conspire / To make this fort assume / The furniture of home; / Lest we should see where we are, / Lost in a haunted wood, / Children afraid of the night / Who have never been happy or good.”

I remember many things that happened there and many faces that passed under the red and pink neon beacon with its cocked, cocky green class. Air-conditioned respite from steamy streets, rude castle beneath the great snowfalls of then. An oral history of a hundred or a few hundred spectators and visitors and regulars and dispossessed and disposed of this place would be so worldly and wise.

One night giddy in love, a tall actor of local origin came to the Club with a beautiful woman almost as tall, someone worshiped from afar and in the bar, from nearby by a crowd that would not allow themselves to be seen as impressed, figures used to catching and collating glimpses of life lived in the city, never looking straight at a thing. The night tempted swelter.

Tall and smitten. Tall and taller. R. and I are close enough to read lips. The pair are at the notorious photo booth, bar’s dim swim illumined by short curtains parting. He swoons; she dips. As much as a tall man can swoon standing over a statuesque woman. She is barefoot and electric. Casually electric.

R. says, did he say marry me and I said I don’t know and she says did she say how could I marry you and we lean a few inches closer to each other and to the pair as she twirls, barefoot, across the dirty red-and-black tiles and pushes his face away and he gashes his temple at the rail that the curtain hangs from. She is laughing and with her head turned, oblivious: a frame of classical beauty caught in the spill of light for an instant and then as indelible memory. He bleeds. “Jesus Christ,” R. says, “She’s so fucking beautiful even telling you to fuck the fuck off.” In a movie co-starring that man in the era in which he was known, the air would be cooled and filled with dancing snowflakes, or tiny diamonds of ice to be set in rings worn by the stars of the flea circus.

The local, sometimes distant, for a now-scattered artists’ working class. Everything written about that past is a little a-kilter. From that time, too, there’s remembrance of things repast, there’s always potatoes, this elongated moment that salted the way for the coming decades of Chicago as a citadel of American cooking.

As Smoke Daddy was opening a couple decades ago, I listened to the first owner as he cogitated on starch, planning particular oils and separate fryers for triple-cooked french fries made from aged potatoes. Nearly across the street, Leo’s Lunchroom (defunct) had a common potato salad that filled many a lunch and there was coffee, strong, good. Did it outlast nearby diners from those that still spotted neighborhoods across the city, The Busy Bee (defunct) under the El at Damen? Diner Grill on Irving Park? Arlene’s Diner (defunct), with the four-“eeg” special four blocks south of Busy Bee, before Ukrainian Village flourished and then floundered as colorful destination?

Studs Terkel used Division Street as a metaphor for America. The years I lived there, I counted on Division Street for a sandwich or a cup of coffee. And the Leo’s potato salad, chunks of potato that consistency, chilled, barely. It went with everything, especially trying to fill pages of a composition book faster than the cartoonists filled sketchbooks. Drawing and writing and conspiring was afoot, too, at Bombardier Cafe (defunct), later Earwax Cafe (defunct), where the potatoes were starchy archipelago in a huge vegan stew that a short generation of Chicago graphic artists fitfully sustained themselves in the 1980s and toward a new century.

Blackbird (defunct) offered their freshly parsed potatoes in the 1990s, with chef Paul Kahan’s variation on the Lyonnaise salad, an endive salad incorporating small Yukon gold potatoes, with basil, rendered pancetta and poached egg, in a fried cup made from shaved Yukon golds. Truly coarse pepper was ground atop the egg and vinaigrette on greens, the entire confection waiting to be crushed by a few bold diagonal knife and fork strokes. It was ripe, avid, even, for the demolishing.

“It’s the kind of clean-tasting mix of textures that shows Kahan’s sure hand with the possibility of fish, seafood and contrasting textures,” I wrote a few days after the Financial Times weekend edition had named the fairly fresh Blackbird one of the world’s best new restaurants. Contrasts are essential to “simple, well-prepared American cuisine,” Kahan told me, “and by focusing on fresh and seasonal ingredients, he got the most from the simple contrast of flavors that are smoky, spicy, sweet or salty.”

Fresh, seasonal: what Chicago ought to be, always, before memories settle. Before the snow begins to fall, glistening in the sky, small diamonds, which may go to mist, droplets, dropping.