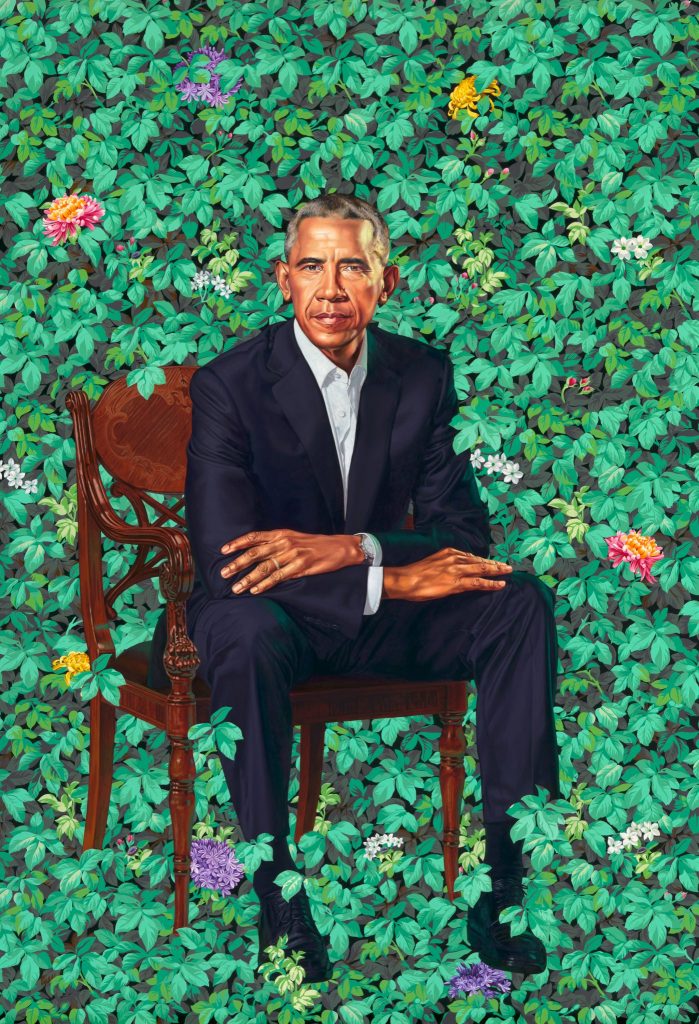 “A bright white wall at LACMA is made more vibrant by the arrival of ‘The Obama Portraits’ in their West Coast debut,” relays the Hollywood Reporter, “part three of a five-city tour that began in Chicago, stopped in Brooklyn, and will continue on to Atlanta and Houston in 2022.”

“To advocates of the NFT, the technology offers a revolutionary new way of selling art, and of circumventing snooty cultural gatekeepers whose resistance to a crypto future seems as square as the 19th-century Parisian art world’s disdain for impressionism,” writes the Guardian. “In this context, the relevance of Paris Hilton’s brand to the NFT movement makes sense. Pink, jewel-encrusted, and openly motivated by being as rich and famous as humanly possible, she’s a far cry from the type of person whose work is typically exhibited in blue-chip galleries or hung in booths at art fairs. Yet Hilton’s endorsement may also be ammunition for those who view the NFT as just another depressing example of the speculative logic of finance monopolising taste. To detractors, from critic Waldemar Januszczak to artist David Hockney, the NFT marketplace is a home for morally bankrupt, environmentally vandalistic money-grabbers whose creations barely qualify as art.”

How Do Artists Become A Part Of The Historical Record?

CAMP in Conversation presents “Extra! Extra!,” a presentation with questions: “How do artists become a part of the historical record? How do the ideas and concerns of artists enter into a larger discourse? Meet some of the key players in Chicago’s tiny but vital arts journalism sector. This virtual public dialogue will collaboratively explore creative and equitable models for capturing and critiquing Chicago’s dynamic creativity.” Panelists are Salem Collo-Julin, culture editor at the Chicago Reader; Sandra Treviño, music journalist and radio host for WLPN and WBEW-Vocalo; Vincent Uribe, art director of LVL3; with moderator Kerry Cardoza, art editor at Newcity. Wednesday, November 10, 5:30pm-7pm on Zoom. Free registration required here.

At the Trib, Robert Channick, Dan Petrella and John Byrne decipher the five casino proposals on the mayor’s desk. “City Hall staff members are tasked with recommending to the mayor which casino plan she should present to aldermen for approval. But it will ultimately be up to Lightfoot to make that call—one of the most consequential she will face as mayor as the city, also facing the Chicago Bears’ potential move from Soldier Field, counts on tax revenue from the mega-complex to help plug its enormous public pension funding holes. If a majority of the City Council gives her preferred plan the thumbs-up, it will then head to the Illinois Gaming Board for an up-or-down vote on whether to award a license to the developer of a Chicago casino.”

“Related Midwest is helping a new name break into upper ranks of a Chicago construction market dominated by big general contractors like Walsh Group and James McHugh Construction,” reports Crain’s. “The Chicago developer has picked a minority-owned firm, Bowa Construction, to build its next apartment project, a forty-three-story tower in the Fulton Market District, in a partnership with Related’s in-house construction division. [It’s] the first Chicago high-rise to be constructed by a firm owned by a person of color.”

“Edgewater neighbors and preservationists are trying to halt Howard Brown Health’s planned demolition of a 100-year-old former auto garage on Broadway, asking the health group to reuse the historical building in its future plans for the site,” reports Block Club Chicago. “Howard Brown last week received a demolition permit for the… 1911 building that sits on Edgewater’s former motor row… Howard Brown has yet to make public its plans for the site.”

“An Irish real estate investment fund that tried to sell a vintage Loop office building last year while staring down a possible mortgage default has handed over the property to its lender,” reports Crain’s. The move for the 226,000-square-foot office building “was a deed-in-lieu of foreclosure,” meaning the venture “walked away from the twenty-four story Art Deco building rather than face a foreclosure lawsuit over missed loan payments.”

The Andersonville Chamber of Commerce brings back its popular Viking Pub Crawl, welcoming over 200 costumed Vikings to try drink specials throughout the neighborhood on Saturday, November 20, 3pm–6 pm. Now in its fourth year, the Crawl traditionally kicks off the Andersonville holiday season and is celebrated mid-November in honor of St. Marten’s Gås Day, “gås,” meaning “goose.” (Four years ago, the pub crawl replaced the neighborhood’s annual goose parade.) Check-in begins at 2pm at @tmosphere, 5355 North Clark. Each ticket includes a lanyard that allows access to drink discounts at fourteen participating bars and restaurants, a free appetizer at check-in and a commemorative Viking Pub Crawl beer glass designed by Transit Tees. Tickets ($20) are available at the Viking Pub Crawl Page. An “authentic” cow horn drinking horn is available for an additional cost.

Film industry trade publication TheWrap issues its annual ranking of the top fifty U.S. film schools with a list in print and online, led by USC, the AFI Conservatory and New York University. Columbia College Chicago lands at eighteen; Northwestern University at twenty-two; DePaul University at thirty-six; and the School of the Art Institute of Chicago at thirty-eight, concluding its blurb with “Bong Joon-ho recently named alum Jennifer Reeder as one of twenty filmmakers who will shape cinema over the next decade.” The complete list is here.

“We aim to spotlight the resilience of the residents in this region and reach more people in marginalized and underserved communities in both the city and suburbs,”  write Mitch Pugh, Rochell Sleets, Adeshina Emmanuel and Amanda Miley at the Trib. “Our two newsrooms are unique, with different styles, audiences and histories. But our commitment to public service and investigative journalism unites us.”

Chicago Opera Theater, “Chicago’s foremost producer of contemporary and re-imagined opera, continues its season with the Chicago premiere of ‘Becoming Santa Claus,’ in three performances only, December 11, 17  and 19, at the Studebaker Theater in the Fine Arts Building. “Debuted by the Dallas Opera to much acclaim in 2015, the English-language opera by American composer Mark Adamo receives a brand-new production by Chicago Opera Theater. “Chicago Opera Theater is thrilled to present the holiday gem ‘Becoming Santa Claus’ to Chicago audiences” the group’s general director Ashley Magnus says in a release, “brimming with holiday cheer and beautiful music, it’s a great opera for the whole family: perfect for kids, opera newcomers and aficionados alike.” More here.

The Joffrey Ballet’s reimagined classic, “The Nutcracker,” by Tony Award-winning choreographer Christopher Wheeldon, highlights the Joffrey’s debut season at the historic Lyric Opera House with twenty-six performances from December 4–26. “’The Nutcracker’ is a celebration of the optimistic spirit that allowed Chicago to rise from the ashes of the Great Chicago Fire and produce the World’s Columbian Exposition 128 years ago,” artistic director Ashley Wheater says in a release. “We are thrilled to be able to present one of the world’s most beloved holiday traditions at the Lyric Opera House for the first time and celebrate the tenacity that enables Chicagoans to overcome even the most extraordinary challenges.” More here.

Jane Foley, 71, Conservator Who Restored German U-Boat For Museum of Science and Industry

Jane Foley “was a renowned conservator who was called upon to preserve relics and objets d’art around the world, including some of the most beloved artifacts at Chicago’s museums,” writes Maureen O’Donnell at the Sun-Times. “Among them: the German U-505 World War II submarine at the Museum of Science and Industry. Captured by American forces in 1944, it’s the only German submarine on U.S. soil. Her memories of chimney sweeps in her native England inspired her work on that, according to head curator Kathleen McCarthy. Ms. Foley modified chimney-sweep tools to clean the conning tower—the mini-tower in the middle of the sub, a space so cramped it can fit just than a ladder, a periscope tube, the top hatch and a seat the size of a bike saddle. ‘She always came up with ingenious ways’ to solve problems, McCarthy said.”

“Billionaires have become a popular target in today’s political environment, and [billionaire] Neil Bluhm… isn’t too happy about it,” reports Crain’s. “‘You know, I’m embarrassed if somebody says I’m a billionaire,’ the real estate and casino mogul Neil Bluhm said at an investment conference, ‘It’s like I’m a criminal.’ Bluhm, who is in his early 80s, bemoaned how attitudes have changed about getting a good education and succeeding in business… Bluhm said his casinos have benefited others, creating 10,000 high-paying jobs… The problem, Bluhm said, is that people who have been wildly successful in business are considered villains by many, not heroes. He cited Jeff Bezos, the founder and chairman of Amazon and world’s richest person, with a net worth of $177 billion… ‘What’s wrong with Amazon?’ Bluhm asked. ‘It’s a fantastic thing. It’s great for the country and the world. He made it, but that’s what America is all about… You’re darn tootin’.'” Reports Fran Spielman at the Sun-Times: “Chicago casino magnate Neil Bluhm has lined up a team of blue-ribbon lobbyists to try and convince the City Council not to lift the ban on sports betting in Chicago… Bluhm is poised  to make the argument himself during a subject matter hearing on sports betting in Chicago… Bluhm’s interest in blocking the ordinance is twofold. His Rush Street Gaming company is part of two separate groups vying to build a Chicago casino. And his Des Plaines-based Rivers Casino already has a sports book that stands to lose business if sports betting is legalized in Chicago. Bluhm has personally registered as a lobbyist and lined up a high-powered team of lobbyists to join him in trying to kill or, at the very least stall the sports betting ordinance.”