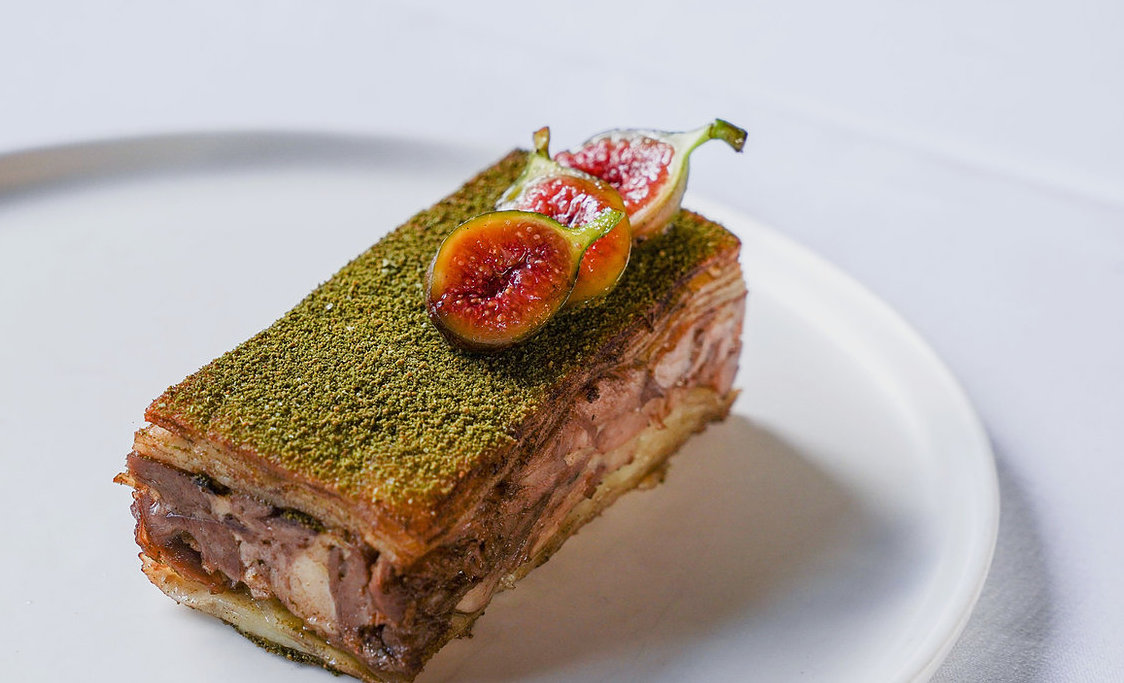 Gray has announced its representation of Torkwase Dyson, joining Pace in representing the artist. Gray’s first solo exhibition with Dyson will be in Chicago in the fall of 2023. “Working across the disciplines of painting, drawing, installation, and sculpture, Torkwase Dyson distills and examines the crosscurrents of ecology, architecture, and infrastructure to envision new modes of environmental and spatial liberation. Through a process of intensive research into the built and natural environment, Dyson’s practice explores the ways in which Black and brown people navigate, negotiate, and negate existing systems,” the gallery relays in a release. “In her interrogation of space, Dyson has developed a distinct visual lexicon of geometric shapes. The trapezoid, scalene triangle, square, and curve that she deploys, while abstract in nature, are drawn from historical narratives of what the artist calls ‘Black spatial genius.’ … In developing her ‘Hypershape’ series, Dyson drew the curve of a ship hull to reference the self-liberation of Anthony Burns; rectangular shapes envisioning the crate in which Henry ‘Box’ Brown shipped himself to freedom; and triangular volumes culled from the attic crawl space where Harriet Jacobs found escape. The artist reorients, shifts, and layers these powerful forms to produce rich compositions in drawing, painting, and sculpture.” More here.

Will Chicago Transit “Build Back Better” With Fed Billions?

Reflecting plans outlined at the climate summit in Glasgow, “Public transit will have to get a lot better to attract twice as many riders within nine years,” writes Joe Cahill at Crain’s. “That’s especially true in Chicago, home to one of the nation’s biggest transit systems. Thousands of miles of commuter rail tracks, elevated train lines and bus routes criss-cross the region, linking far-flung communities to a dynamic central business district that powers the local economy. [But] the system has become sclerotic. Cash-strapped transit agencies struggle to maintain tracks and keep buses and train cars rolling, deferring about $19 billion in maintenance and repair projects. As infrastructure deteriorates, so does service.”

Stabilization work has been ordered on the Laramie State Bank Building at 5200 West Chicago in Austin, reports YIMBY. “As a part of one of the Invest South/West sites, the bank will see a new life as an incubator, cafe and blues museum as work progresses over the coming years… The bank has been vacant for nearly a decade and is in dire need of work to assure its longterm feasibility.”

Parlor Pizza Allegedly Had “Rejection Section” For Customers Of Color

“Eight former employees spoke to Block Club about their experiences at Parlor Pizza,” reports Block Club Chicago. “They said customers of color were routinely seated in a spot employees dubbed the ‘Rejection Section’ at the River North location, while workers across the company were subject to harassment, unpaid overtime and being overworked—all while leaders dangled the threat of being fired over their heads. Parlor has disputed the allegations.”

“Since opening their doors in August of 2020, Robert Et Fils has received an outpouring of love and support from Chicago, without opening its dining room doors,” the restaurant reports. “The small team of three offered bi-weekly carry-out menus and an a la carte menu on the patio—until now. On December 3, diners will have the chance to dine indoors and experience a one-of-a-kind tasting menu experience. ‘We’ve waited until the perfect moment to open our doors,’ says chef-owner Rob Shaner. ‘We’re excited to offer Chicago a traditional fine-dining experience like you would in France, where the chef is allowed to serve what he thinks you should eat, through a shorter tasting menu with larger portions. Everything that goes on the table has been curated to tailor the experience and have a natural flow—from the bread to the first cocktail, wine pairing, and final dessert course.’ The seven to ten-course tasting menu will change on a bi-seasonal basis, designed with a sense of connection between each course.” The French-inspired tasting menu is priced at $205 per person, with an optional beverage pairing (wine, cocktails, or spirit-free). The beverage program also features a la carte cocktails and non-alcoholic drinks evoking “flavors and elements of fall: smoke, spice, nostalgia.” Robert Et Fils is at 4229 North Lincoln, seating up to twenty and is also available for private dining for up to twenty-four guests. Reservations for Fridays and Saturdays only, for now, are on Tock.

“The union representing 60,000 film and television crew workers voted to ratify a new three-year contract with Hollywood studios, resolving for now a labor dispute that had threatened to disrupt productions nationwide,” reports The Los Angeles Times. “Members of the International Alliance of Theatrical Stage Employees (IATSE) barely approved a new contract that had been negotiated by union leaders after months of contentious bargaining, the union said in a statement. However, the vote was extremely close, with only 50.3% of the 60,000 members affected by the two contracts voting in favor of the agreement. IATSE uses an electoral college style system through which locals are assigned delegates based on their size of memberships. Members vote within their local union and once a local reaches a majority vote, to either ratify or reject, all delegate votes are assigned to the majority result.” Here’s the union’s release. Writer Alex Press on Twitter: “Members said that’s a worst-case scenario: members voting it down but it passes anyway. Extremely bad news for the Basic to squeak by only because of the delegate system.”

Shifting Voices Film Fund is the first national grant coming out of Chicago to support Black, Indigenous and People of Color filmmakers, via CMP And Mezcla Media. “We are thrilled to be working in tandem with Mezcla Media Collective on this inaugural fund. Their innovative approach to supporting women and non-binary filmmakers of color fits directly in line with the ethos of the fund, and brings a wealth of knowledge to ensure overall success,” CMP founders Paula Froehle and Steve Cohen [Newcity Film 50] say in a release. The hope is to open access to capital and resources for underrepresented voices in media. “While the national rhetoric around race experienced a major shift in 2020, BIPOC filmmakers still face major structural barriers to getting their stories told within the independent media space.” The Shifting Voices Film Fund is open to stories and media developed by BIPOC creators.

Overseeing film selection will be longtime industry veteran Hussain Currimbhoy, taking on the role of CMP’s director of global project development. “To help guide the Shifting Voices Film Fund is a thrill,” said Currimbhoy. “Together, we will add momentum to this special time of bringing marginalized voices to center stage. Expanding our support for the best in documentary filmmaking and welcoming new creative voices are such necessary and exciting missions.” The fund will primarily support feature-length films-in-progress, and is looking to work with stories that spotlight historically excluded cultures, histories and experiences. Applications for the Shifting Voices Film Fund are open, and will close at 11:59pm on November 22.

“Our stories have long existed. As have the burgeoning community of BIPOC nonfiction storytellers,” Mezcla founders Colette Ghunim [Newcity 2020 Filmmaker of the Moment] and Elena Valentine say in the release. “The issue has long been about access and ensuring that we can provide sustainable support to drive impactful change through documentary film. We are thrilled to partner with an organization like CMP who understands this. And more importantly, together we are rethinking existing processes to make this film fund more equitable, inclusive, and positive for all stakeholders involved.” The Shifting Voices Film Fund is made possible through seed funding from the Chicago Community Trust and the support of CMP members. The application and FAQ are here.

Supplementing widespread anecdotal evidence, “Young people are almost four times more likely than older viewers to watch TV shows with subtitles, despite having fewer hearing problems, according to research by a captioning charity,” reports the BBC. “Many have also got used to watching videos with subtitles on social media, while the success of programs like South Korea’s ‘Squid Game’ shows they are no longer seen as an extra effort.”

“American journalist Danny Fenster, sentenced only days ago to eleven years hard labor in Myanmar, has been freed and is on his way home,” through the intercession of former U.S. Ambassador to the U.N. Bill Richardson, reports the Associated Press. “Richardson said… that Fenster had been handed over to him in Myanmar and would return to the U.S. via Qatar over the next day-and-a-half. ‘This is the day that you hope will come when you do this work,’ Richardson wrote. Richardson said he negotiated Fenster’s release [in] face-to-face meetings with General Min Aung Hlaing, Myanmar’s military ruler. Fenster, the managing editor of the online magazine Frontier Myanmar, was convicted Friday of spreading false or inflammatory information, contacting illegal organizations and violating visa regulations.”

Every Record Store On Earth On VinylHub

For minds on vinyl, Discogs is building an interactive map that hopes to link to every record store on the planet. Forty are annotated in the Chicago area; here’s the page for Shuga Records in Wicker Park.

“Beanie Babies [have been] airlifted from Chinese factories to O’Hare to circumvent shipping backlogs in time for the holidays,” reports the Trib. “With his Beanie Babies stuck at sea aboard a flotilla of slow boats from China, Chicago billionaire Ty Warner has taken to the skies to circumvent the ongoing shipping crisis, booking entire cargo planes to get his signature stuffed animals home for the holidays.”

“In the early morning hours of Friday, November 19, a partial lunar eclipse will be visible throughout North and South America, Australia, and parts of Europe and Asia,” the Adler Planetarium reports. “During a lunar eclipse, the Earth comes between the Sun and the Moon, blocking direct sunlight falling on the Moon and covering the Moon in shadow. During this eclipse, ninety-seven percent of the Moon will slip into the Earth’s dark shadow. The lunar eclipse will be visible, weather permitting, from 1:18am-4:47am, and the Chicago area will see the entire eclipse.” The Adler Planetarium will host a special edition of its YouTube program Sky Observers Hangout, with Director of Public Observing Michelle Nichols and Astronomy Educator Adriana Guzman Diaz, for a live look at the lunar eclipse, weather permitting, and an opportunity to learn more about eclipses with an interactive, moderated chat. The Sky Observers Hangout will go live at 1:30am. To subscribe and set a reminder, go here. For local eclipse visibility for a specific location, go here.