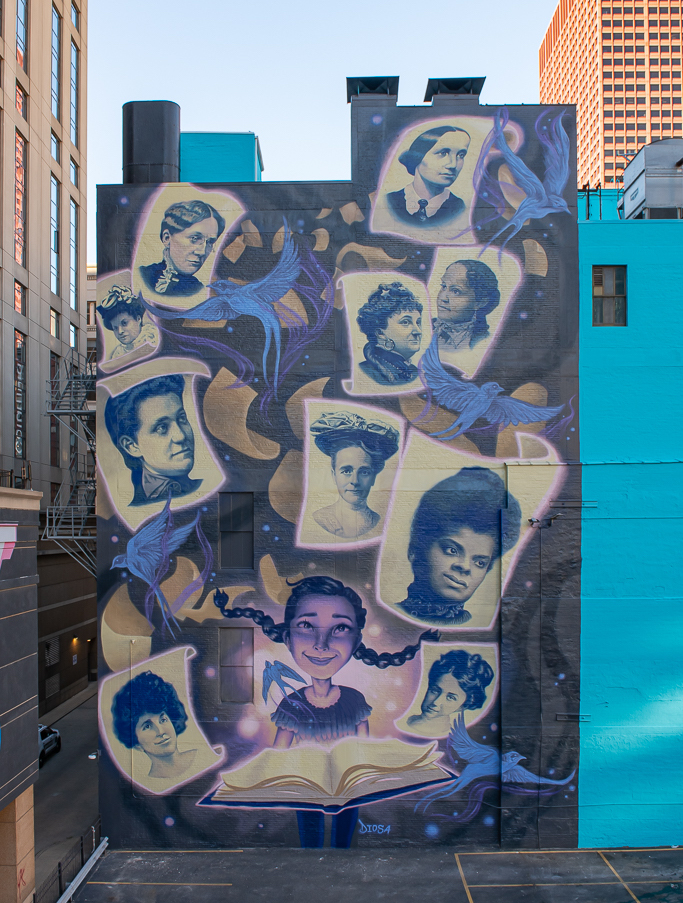 “Artists behind a women’s suffrage mural in the South Loop say a parking lot owner is refusing to rent them the space they need to set up scaffolding and paint,” reports the Sun-Times. “‘He felt that this work was too political,’ said Meg Duguid, chief curator of the Wabash Arts Corridor, where the mural was to be displayed on the wall of a Columbia College Chicago building at 525 South State… The painting… ‘Speak Up,’ was to feature the words, ‘I’m speaking,’ a refrain repeated by Kamala Harris during last year’s vice-presidential debate. It is meant to be a companion to a mural titled ‘On the Wings of Change’ already painted on an adjacent wall.” The group “needed to rent parking spots at Loop Auto Parks to give artists access to both walls. They said the owner of the lot, Thomas R. Baryl, allowed artists to complete the mural featuring the girl but not the other one. Baryl ‘inadvertently saw the design … and he asked us to choose something else,’ Duguid said. To “watch it fall apart due to the accessing of the building was disappointing.” A Newcity dispatch examines the conflict.

“City rules will allow dog owners to bring their companions into some Chicago bars under an ordinance that advanced out of a City Council committee,” reports the Daily Line via Block Club. Bar owners have complained that “city health officials are ticketing their businesses because they allow dogs on the same premises as cocktail garnishes like lemons and limes, which can be defined as ‘foodstuffs’ under city code.” The new rule would allow puplicans to continue “something they’ve been doing for some time.”

“Nearly sixteen months after Pizza Friendly Pizza first began slinging slices,” reports Time Out Chicago, “diners are back inside of restaurants, the Empty Bottle is hosting shows almost nightly and the weather is getting… too cold for lining up to order from a window in an alley.” So the restaurant “opened its dining room to guests for the first time.” The menu “will continue to expand alongside the restaurant’s hours. Cold cut Italian and chicken parmesan sandwiches that were on the concept’s initial menu last summer are set to return” as opening days expand.

“The Chi” executive producer Lena Waithe has set an overall deal with the Warner Bros. Television Group, and her company is also developing a scripted adaptation of “Hoop Dreams,” writes The Hollywood Reporter. “We are excited to work with Hillman Grad, Playground and Warner Bros. Television on adapting ‘Hoop Dreams’ into a scripted television series,” Steve James, Peter Gilbert and Frederick Marx said in a joint statement. “There’s been quite a bit of interest over the years since the film came out in 1994, but Lena Waithe is the ideal Chicagoan to lead the effort to finally make it happen.” The company’s take is “described as a coming-of-age drama following two Black teens in 1990s Chicago who experience the highs and lows of being high school phenoms at the height of the Michael Jordan era and a time when pre-college students turned pro.”

“Gender Queer” Under Fire In Downers Grove School Board Meeting

“The Mix” Looking For Replacement For Eric Ferguson

WTMX is looking for a new morning host, reports Robert Feder. “The job posting by Hubbard Radio Chicago comes two weeks after Eric Ferguson stepped down from the hot adult-contemporary station in the wake of sexual misconduct allegations and multiple lawsuits by former co-workers. Following a settlement on his contract, Ferguson’s departure was barely acknowledged by the company. But every reference that he ever worked there has been scrubbed from the station’s media.”

“American journalist Danny Fenster, who was freed after nearly six months in jail in military-ruled Myanmar, arrived in the United States for an emotional reunion with his family,” reports Associated Press. “Fenster, who was sentenced last week to eleven years of hard labor, was handed over Monday to former U.S. diplomat Bill Richardson, who helped negotiate the release. He is one of more than 100 journalists, media officials or publishers who have been detained since the military ousted the elected government of Nobel laureate Aung San Suu Kyi in February. It’s been a ‘long time coming, a moment I had been imagining so intensely for so long,’ a bearded and shaggy-haired Fenster said after landing in New York. ‘Surpasses everything I had imagined.'”

“Monday’s column mentioned the anticipated merger of the Chicago Sun-Times and WBEZ which, while it has been reported, still flew under the radar for some readers,” writes Sun-Times columnist Neil Steinberg. “I missed that completely!” a reader writes him, “I infer from your writing that you are in favor.” “I wrote him back that indeed I am. While I haven’t been on the station much in recent years, I’ve been reporting on WBEZ longer than I’ve been on the staff at the paper.”

“Michael Johnston was dropped as CEO of Audiotree, Schubas Tavern and Lincoln Hall after being sued for allegedly using hidden cameras to record nude videos of his nanny,” reports Block Club Chicago. “Michael Johnston has been dropped by Chicago-based label Audiotree and venues Schubas Tavern and Lincoln Hall and faces criminal charges after being sued for allegedly setting up hidden cameras in his Roscoe Village home to take nude videos of his nanny.”

Jeff Parker’s “Forfolks”—a new album of solo guitar works—will be released on December 10 via International Anthem & Nonesuch Records. The album includes interpretations of Thelonious Monk’s “Ugly Beauty” and the standard “My Ideal,” plus six original compositions including “Four Folks” (first written by Parker and recorded in 1995) and “La Jetée” (which he recorded with Isotope 217 in 1997 and with Tortoise in 1998). “The four totally new original compositions are loop-driven, stratiform works that marry melodic improvisation with electronic textures. As Parker describes: ‘I am trying to create a sonic world to wander around in.’ The album was recorded by Graeme Gibson at Sholo Studio in Altadena, California (aka Jeff’s house) over two days in June 2021.” More here.

Chicago-based Spektral Quartet will disband at the end of this season, reports Slipped Disc. “Over the past 11 years, we have endeavored to become more than your friendly neighborhood string quartet,” the group says. “We believe in art-making as a form of building community, and have tried to put this into practice with a seriousness of purpose and a welcoming embrace, and always with a side of whimsy. We recognize just how fortunate we are to have pursued such meaningful projects and contributed to the cultural fabric of our great city of Chicago with the artistic, financial, and moral support of so many of you. And so we wish to express our profound gratitude.” Their decision follows the breakup of the Artemis Quartet in Germany and the retirement of the Emersons in New York.

Wrigleyville Marijuana Dispensary A Home Run Away From Cubs Park

A new dispensary has moved into the former John Barleycorn space, Channel 7 reports. “Sunnyside Wrigleyville will be the closest cannabis dispensary to any national ballpark. The space offers 21 points of sale, the most of any Sunnyside dispensary in the state.” It “hopes to capitalize on baseball and concert fans in the area.” The Sun-Times: “‘Sunnyside is [dedicated] to normalizing the way that people shop for Cannabis,’ said Charlie Bachtell, CEO of Cresco Labs, which operates Sunnyside, at a Monday ribbon-cutting ceremony. ‘There should be no stigma associated with it. The fact that we are here sort of at the intersection of “Main” and “Main” is the future of cannabis.'”

“The Indiana Democratic Party is calling on the state of Indiana to legalize marijuana and capitalize on the economic boom legalization has brought to neighboring states,” reports WGN-TV.

As live performance returns, “cultural institutions are confronting a long list of unknowns,” reports The New York Times. “Will audiences feel safe returning to crowded theaters? Have people grown so accustomed to watching screens in their living rooms that they will not get back into the habit of attending live events? And how will the advent of work-from-home policies, which have emptied blocks of downtowns and business districts, affect weekday attendance at theaters and concert halls? … Arts groups are trying to gauge what the embrace of more flexible work-from-home policies will mean for their ability to draw audiences in [San Francisco]” where the “housing crunch has already driven many people to settle far from downtown. Close to seventy percent of the audiences at the San Francisco Opera and the San Francisco Symphony—two nationally recognized symbols of this city’s vibrant network of performing arts institutions—live outside the city.”

“With performance venues now awakened from their pandemic slumbers, there’s no shortage of holiday cheer all over town. Whether Tiny Tim and George Bailey are your speed, or you prefer something a little more out there, there’s something for everyone this season,” lists Lauren Warnecke at the Trib.