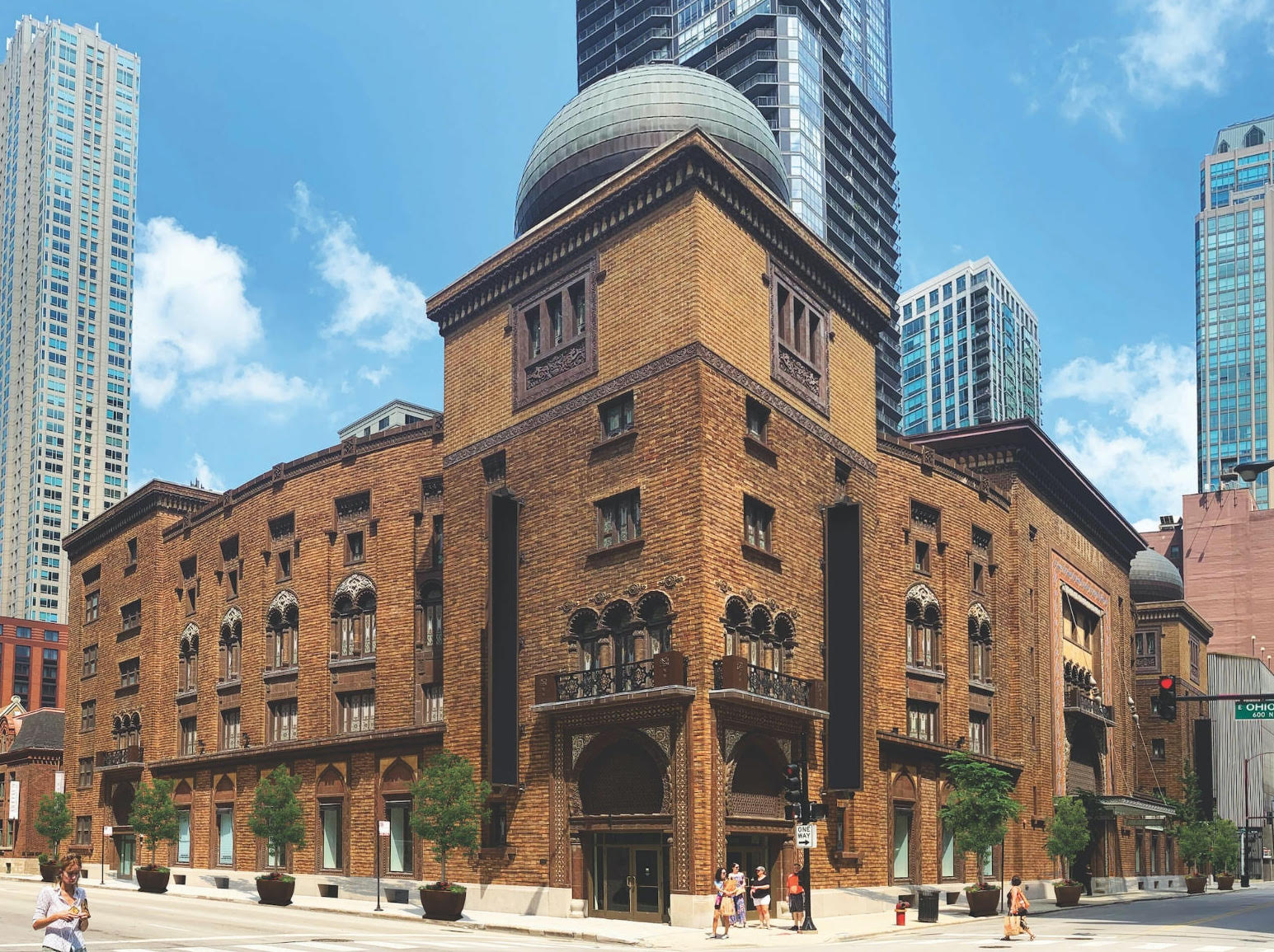 Chicago-based Friedman Properties, which bought the Medinah Temple in 2019, is seeking tenants for the property, reports Crain’s. “The entire 138,000-square-foot building at 600 North Wabash is available for lease… Filling a big space won’t be easy in a downtown retail real estate market struggling to recover… Gap, Macy’s and Uniqlo have closed stores on North Michigan Avenue, the city’s biggest shopping corridor, which has a 26% vacancy rate… The Medinah Temple is just two blocks west.”

Medinah Temple will showcase its historic space this holiday season by introducing “Sleigh Bells,” “a trippy and immersive holiday pop-up full of color, sound, lighting, murals, technology, art and Christmas spirit,” the organizers relay. “Taking over 45,000 square feet of the bottom and first floors of the property from December 2-January 3, ‘Sleigh Bells’ invites guests to make their way through large-scale, interactive art installations that will transport them to vibrant and visually stimulating spaces like an infinity mirror ice cave, Santa’s workshop, Santa’s armory, and a dazzling oversized ornament light show display. The project is produced by Dom Brown and John Schroeder of Superfrüit. The local duo has curated experiential installs and pop-ups for Chicago brands such as Lollapalooza, Spring Awakening Music Festival, North Coast Music Festival, Morgan Manufacturing and Red Bull. Superfrüit has also brought on Keegan Moon (Dine|Amic Hospitality, Evening Entertainment Group) of Thyme Management to head up food and drinks. Seasonally themed offerings will be served by way of a hot chocolate and ice concession stand housed within a massive forty-four-foot dome with a 360° mirror cave. ‘Chicago is home to a variety of Christmas markets, holiday-themed bars and pop-ups, but we wanted to present a unique experience that stands out from the rest by using lighting, technology, projection and art to put the spotlight on local Chicago culture,’ says Superfrüit’s John Schroeder.” More here.

“Allstate is selling the property as employees have more choice about where they work and many are choosing to work from home,” reports the Trib. “Insurance giant Allstate has reached an agreement to sell its longtime Northbrook headquarters for $232 million to an industrial developer that plans to turn the corporate campus into a massive logistics facility.”

“Why not rent a home designed by one of America’s most famous architects for your next getaway? Frank Lloyd Wright designed more than 1,000 structures during his lifetime—532 of which were realized… Today many of his residences have been turned into house museums or rental properties, either used for special events or weekend escapes,” tallies Chicago magazine.

“Patrons at the Lyric Opera Chicago will have access to a remodeled restaurant as the theater debuts a new third-floor venue called Florian from the owners of Slightly Toasted,” reports Eater Chicago. “Toasted Hospitality’s Art Mendoza has elected to focus on dishes like slow-cooked prime rib, Chilean sea bass, and cavatappi with vegetarian bolognese inside the 130-seat space. Customers will be able to reserve pre-show three-course meals and make intermission reservations for dessert, coffee and cocktails.”

Alinea Group has pulled out of “providing the food and beverage at the upcoming St. Regis Chicago hotel,” reports Eater Chicago. “The hotel is inside the 101-story skyscraper at 363 East Wacker, originally known as the Vista Tower… Studio Gang, an internationally recognized architectural firm, designed the 1,191-foot-tall tower that also contains $1 million condos. It’s the city’s third-tallest building.”

“Bedrock Faith” Is Latest One Book, One Chicago Entry

Eric Charles May will be interviewed virtually December 2 at 6pm by Booklist editor Donna Seaman to talk about his “One Book, One Chicago” entry. “One of the reasons I wrote ‘Bedrock Faith’ (2014),” May says in a release, “is that I have seen very little literary fiction about the sort of people I knew while growing up: middle and working class African Americans whose lives are not embroiled with drug use, poverty, and family meltdown dysfunctions. Which is not to imply the validity of such stories or that they shouldn’t be told, but there’s more to the African American experience than deprivation, despair and victimization.” The conversation will stream and be archived as well. More here.

Tax Credits For Local News Would Include Major Chains

“If the $2.2 trillion social safety net and climate package makes it through the Senate,” reports the New York Times, “it will provide $1.67 billion over the next five years for newspapers, websites, radio and TV stations, and other outlets that primarily cover local news. If eligible, they could reap up to $25,000 for each locally focused journalist they employ in the first year and $15,000 in each of the next four.” Major chains could also benefit. “Tribune Publishing and MediaNews Group, both owned by the hedge fund Alden Global Capital, appear to be eligible, as does McClatchy, which is owned by the hedge fund Chatham Asset Management… Gannett, the largest newspaper chain in the country, could receive $37.5 million the first year and tens of millions after that.” The stakes? “There are now 200 U.S. counties without a newspaper… and more than 2,100 papers have shut down since 2004… The number of journalists at newspapers fell to 31,000 last year from 71,000 in 2008.” Meanwhile, the owner of the St. Louis Post-Dispatch, Lee Enterprises, adopts a “poison pill” (much as the Chicago Tribune did earlier).

Former Sun-Timeser Natasha Korecki is leaving Politico for NBC News, Robert Feder reports. “Korecki joined Politico in 2015 after 12 years at the Sun-Times and seven years at the Daily Herald. She wrote the daily Politico Playbook on Illinois politics before being named national correspondent in 2018 and White House correspondent last January.”

“Mayor Lightfoot said she would never do anything that would meaningfully compromise the casino revenue needed to shore up police and fire pension funds that are now dangerously close to insolvency,” reports the Sun-Times. She “denied doing the flip-flop on sports betting and said there is no hard evidence that allowing sportsbooks in and around five stadiums would ‘cannibalize’ revenue from a Chicago casino… Never mind the sky-is-falling scenario portrayed by casino magnate Neil Bluhm. ‘There’s been some dire warnings that have been issued by some who … already use sportsbook at their own casinos and who are trying to kill sportsbook here in Chicago. They have not put forth any convincing evidence that … somehow it’s gonna cannibalize a casino here in Chicago.'”

Grab a pocketful of eccentric gifts while you can: “The popular seller of educational science items and other oddities [has] pushed back the move date” to January, reports Block Club Chicago. “It starts to get too busy to even think about a move,” Block Club was told. “Plus, it requires a lot of help from the warehouse, and we’re in the middle of mail-order season, so it’s postponed, and now we’re looking at the second week of January.”