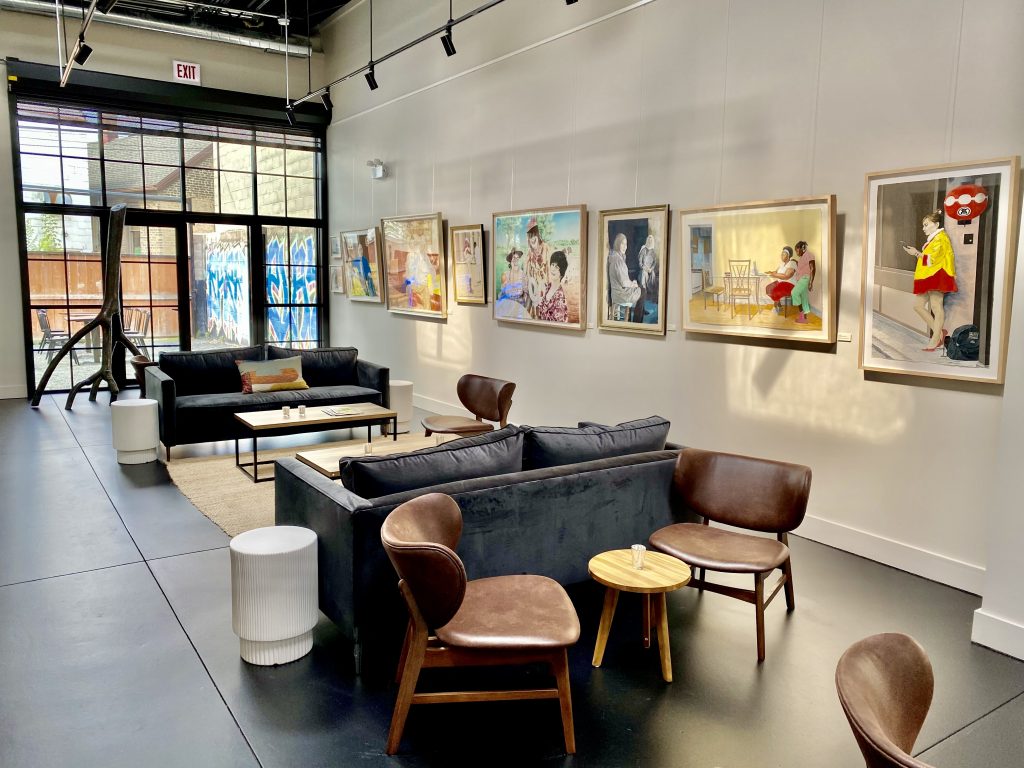 “This is not the simple story you’ve been hearing, of white people shoved aside in the name of equity, and rich women finding themselves forced to change,” reports Christopher Borrelli at the Trib. “This is more expansive, with repercussions reaching far beyond museum volunteers. Often, the museum professionals and docents who spoke for this story laid blame all around. Many applauded the goal of the Art Institute, then added quickly: They also should not have summarily dismissed the docents. Many spoke of the importance of change and the importance of retaining knowledge. Nina Sánchez, co-director of Enrich Chicago—which works with institutions (including the Art Institute) to remove racist policies—said, ‘There is no set of instructions for this, there is no road map. If only it were so easy.’ The Art Institute is not even unique. Similar stories played out in Arizona, Alabama, Washington, D.C. As museums in large cities attempt to reflect the demographics of those cities, don’t expect the Case of the Dismissed Museum Docents to fade away.”

Dusk, a gallery and bar, has opened in West Town at 1518 North Throop. “Dusk is a unique cultural experience from the award-winning team at Northworks Architects & Planners, who have collaborated with some of Chicago’s top restaurateurs—Ada Street, Tortoise Supper Club, Split Rail—and this concept is their first foray into the hospitality industry,” the establishment relays. Dusk is open Thursdays and Fridays, 4pm-10pm. “Designed first as an art gallery, the space morphs into a bar at dusk, as it’s appropriately named. The space is refined, yet approachable, classic, yet forward-thinking. Northworks principals Bill Bickford and Austin DePree collaborated to unveil an intimate yet inviting atmosphere to gather, perfect for drinks after work, a cocktail before dinner or date night.”

“The design juxtaposes natural and industrial elements—green couches, leather chairs and wood furnishings against an exposed ceiling and concrete floors—to create a contemporary look that ultimately allows the pieces of art throughout the space to serve as the focal point. The 2,100-square-foot space is bookended by floor-to-ceiling casement windows and offers varied seating arrangements throughout, anchored by a twenty-five-foot-long bar.  The menu features seven hand-crafted offerings including The Lodge, The Sand Valley, The Desert Retreat, The Aspen and The Greystone, each inspired by one of Northworks architectural projects from around the country. The menu also features local and craft beers as well as a unique selection of wines.”

Loop Student Housing Building Could Be Worth Almost $100 Million

“The owner of a vintage Loop building converted into student housing has put the property up for sale, perking up a dormant downtown market for apartment buildings geared to college students,” reports Crain’s. “The Arc at Old Colony, a 127-year-old building next to the Harold Washington Library, could attract bids in the $90 million range… DWS, the German investment firm that owns the building, paid $76.8 million for it in 2018.”

“Minneapolis’ newest park space on its most historic spot… rises out of ruins of riverfront mills that fueled the city’s rise in the late nineteenth and early twentieth centuries—where Fuji-Ya Restaurant once stood, across from the Stone Arch Bridge,” writes Linda Mack at the Architect’s Newspaper. “The pavilion provides much-needed amenities—places to sit, meet, public restrooms… as well as being home to Minnesota’s first Native American restaurant, Owamni.”

Henry Cai’s Chinese restaurant, 3 Little Pigs, began “as a one-man show in early 2020 near UIC,” reports Eater Chicago. “His Cantonese and Chinese-American food was available sporadically, and customers would need to be quick on the trigger when an Instagram post went up announcing that orders were open.” Now Cai has “settled into a new commercial kitchen in Humboldt Park where he’ll be able to sell carryout six days a week. Instagram ordering will continue for now with a truncated menu until additional kitchen equipment arrives… A wok station and a smoker will allow Cai to cook fried rice, barbecued meats… pot stickers, Mongolian beef, and sweet and sour chicken. ‘Everything I’ve done in the past is coming back,’ Cai says.”

The Music Box Christmas Sing-a-Long and Double Feature returns this weekend. “We’re excited to welcome revelers to our big-screen presentations of  ‘It’s A Wonderful Life’ and ‘White Christmas,'” the Music Box relays in its newsletter. “Each show starts with Christmas caroling hosted by the one-and-only Santa Claus!” Music Box Christmas shows run December 10-23, and some screenings are sold out. Showtimes and tickets here.

“For decades, Vlasta Krsek kept her favorite accordion—which she played with head-tossing abandon in the downtown Chicago parade scene in ‘Ferris Bueller’s Day Off’—at her Berwyn bungalow,” reports Maureen O’Donnell at the Sun-Times. “Now, more than a year after her death at 83, it’s being auctioned off.”

Iesha Malone is opening Rose Café, a bookstore that she hopes can revitalize Roseland and inspire other Black entrepreneurs, reports Block Club Chicago.

Epiphany Center for the Arts hosts Funkadesi, Chicago’s award-winning intercultural band, for its “25th Anniversary Extravaganza” at Epiphany Hall. The evening will begin with a short produced by filmmaker Sree Nallamothu and Funkadesi, followed by a Q&A with the band and pre-concert set by DJ Warp. “Funkadesi’s concert will be infused with special guests, including Mario Smith, who will serve as the evening’s MC, as well as vocalist Maggie Brown, award-winning hip-hop artist PHENOM, Meher Dance Company, Radhika Chimata and Renee Ruffin. Funkadesi blends Indian music–bhangra, Bollywood, Indian folk–with reggae, funk and Afro-Caribbean grooves. The Chicago-based band proudly represents the diverse multi-ethnic communities within the city. ‘I’m thrilled that we’ve stuck it out this long as an independent Chicago band,’ says Rahul Sharma, Funkadesi’s founder-bassist-sitarist” in a release. “We’re a family. Quite simply, we love to play music, we love to be together in front of appreciative fans, and we continue to feed off each other’s energy after all these years.” 201 South Ashland, Friday, December 3, 7pm. More here.

The Gift Theatre board of directors has announced a change in artistic leadership and plans for a new performance space in Jefferson Park. As the group’s twentieth anniversary approaches, co-founder and artistic director Michael Patrick Thornton will step down, succeeded by a trio of co-artistic directors: Brittany Burch, Jennifer Glasse and associate artistic director, ensemble member and casting director Emjoy Gavino. The theater is leaving its longtime home at 4802 North Milwaukee while launching a capital campaign to open a space in Jefferson Park. Thornton will play a leading role in fundraising efforts. The 2022 season will be announced soon, with performances at multiple venues across Chicago.

The offices of Oak Park Festival Theatre sustained significant fire, smoke, and water damage after a November 23 fire at the 1034 Lake Street building in downtown Oak Park, the group reports. “The offices were on the second floor, directly above Delia’s Kitchen. There is substantial damage to the entire building, including damages to two other local businesses and two residences. Our losses are considered total: OPFT’s equipment for stage productions such as computers, sound equipment, costumes, props, and lighting in addition to office equipment, technology, and nearly fifty years of OPFT records and artifacts have been destroyed. OPFT staff and board leadership are still determining the impact on our organization and 2022 programming, including our summer outdoor production in Austin Gardens. OPFT employs more than a hundred artists and serves more than 5,000 patrons annually.” More here.

The Joffrey Academy of Dance, official school of the Joffrey Ballet, has announced the recipients of the twelfth annual Winning Works Choreographic Competition: Audrey Ipapo Baran, Joffrey Company Artist Edson Barbosa, Taylor Carrasco, and Derick McKoy. This announcement follows a national call for ALAANA (African, Latinx, Asian, Arab and Native American) artists to submit applications, which began in June. The choreographers’ world premiere works will be showcased by the dancers of the Joffrey Studio Company and the Joffrey Academy Trainee Program. Winning Works will be presented in four performances at the Museum of Contemporary Art Chicago’s Edlis Neeson Theater next March. (Tickets are $30 and on sale here.) The world premiere works will be available to view digitally following the in-person performances.

The Winning Works choreographic competition was created to recognize talented and emerging ALAANA choreographers and to provide a platform to showcase original and innovative work. The winning choreographers are awarded a $5,000 stipend and are given the opportunity to seek guidance from artistic director of The Joffrey Ballet Ashley Wheater and Abbott Academy director Raymond Rodriguez. “We are proud to announce this year’s winners of the Winning Works choreographic competition, another exceptional group of artists that are sure to bring innovative ideas to the stage,” Wheater says in a release. “I am incredibly excited to once again shine a spotlight on the best and brightest in the field, especially now as we return to live performances.”

“Lanise Antoine Shelley, House Theatre’s new artistic director, is doing away with boys’-club culture and changing the status quo,” writes Kris Vire at Chicago magazine.“I know that had the pandemic and racial unrest not happened,” she tells Vire, “I would not be in the position that I am in today at this particular institution.”

“Cannabis workers pushing to unionize amid complaints of low wages and rough working conditions claim they’ve faced stiff resistance from the corporate pot firms that employ them,” reports the Sun-Times.” In January 2020, Cresco Labs’ Joliet cultivation center employees voted to join United Food and Commercial Workers Local 881. But “the National Labor Relations Board sided with Cresco and exempted the site’s growers from the vote, deeming them agricultural workers and thus prohibiting them from joining a union under federal law… ‘A lot of people running the industry don’t really seem to care about even just the culture and the benefits of cannabis, let alone their employees’ wellbeing,’ said a budtender at Curaleaf’s Weed Street dispensary in Goose Island.”