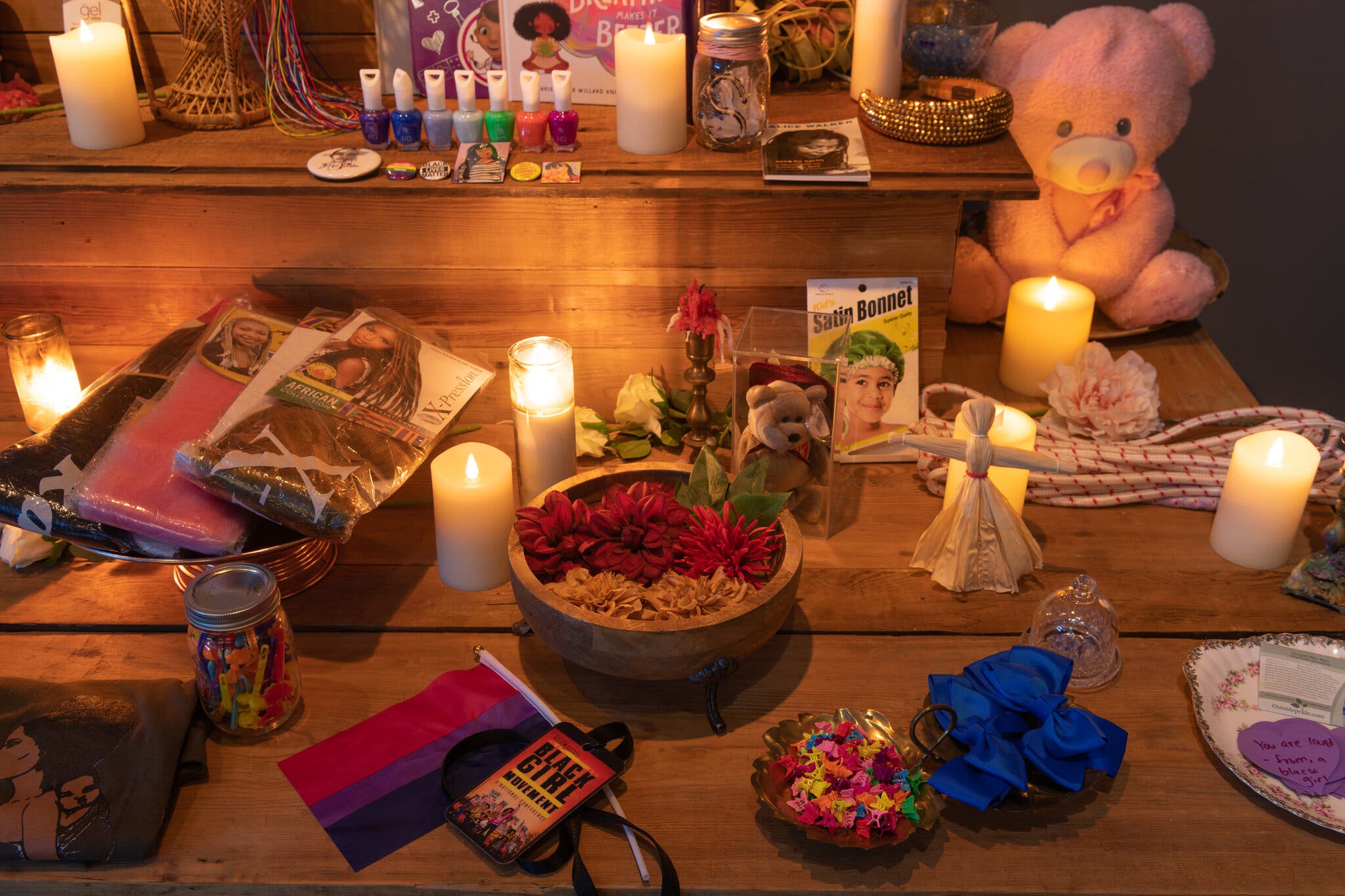 “The Black Girlhood Altar” At The MCA

“‘The Black Girlhood Altar,’ a temporary monument that [traveled through] neighborhoods in Chicago before landing at the MCA as part of an exhibition of work by the artist Andrea Bowers, was meant to honor… the countless other Black women and girls whose deaths preceded the national reckoning that followed the murder of George Floyd in May 2020. Most of their lives had never been memorialized on such a grand scale,” reports the New York Times. “‘It’s taking trauma and reclaiming it for yourself and honoring the people in it,’ said Scheherazade Tillet, a founder of A Long Walk Home, the national organization that sponsored the creation of the temporary monument. ‘The horror is in the trauma, and the beauty is in the spirit of the person.’ The altar was assembled by the artists Leah Gipson and Robert Narciso, Black girls from the Chicago community, and Ms. Tillet.”

E(art)H Chicago (pronounced Earth Art Chicago), a citywide initiative to stimulate community engagement on climate change and environmental justice from the Southeast Industrial Corridor to the North Branch of the Chicago River, is intended to draw attention to how climate change can disproportionately affect some people and communities, and not just the planet, the group says in a release. “Using Chicago as their canvas, artists will be called to raise awareness of environmental issues in communities across the city and nurture urgency, hope and inspire action in neighborhoods. Governor JB Pritzker and Cook County Board President Toni Preckwinkle will serve as honorary co-chairs of the project.”

“This initiative not only helps raise awareness on critical environmental issues, but provides funding for artists across Chicago, as they continue to bring hope to the world through their craft,” Pritzker is quoted in the release. “Illinois understands that when it comes to addressing climate change and environmental justice, there is no time to lose. As we shape Illinois to be the most forward-thinking, most innovative, and most climate friendly state, we’re doing so with the help of bold storytellers and inspiring artists. It’s a testament to the strength and the rich cultural fabric of our state.” Extra consideration will be given to art proposed in art opportunity areas. Art opportunity areas are loosely defined as community areas in which there are fewer cultural and public art assets. With more than $300,000 in grants, the Illinois Science & Energy Innovation Foundation, Builders Initiative, the Chicago Frontline Funding Initiative and the Regeneration Fund invites artists, environmentalists and not-for-profit organizations to apply for funding until January 31, 2022. More here.

Looking At Population Loss In Englewood

For Politico, South Side native Natalie Y. Moore essays efforts to sustain Englewood and the greater South Side. “Gentrification is not Englewood’s biggest threat. Nor is that the case for the rest of Black Chicago, for that matter. How can neighbors better their blocks and commercial arteries when private and public investment historically have been minimal? Englewood is a microcosm for what’s happening in many quarters of segregated Black Chicago. Population loss hits neighborhoods that were once all white thanks to racist housing laws and the plundering of Black wealth. For decades, Chicago was the promised land for Southerners like my grandparents, who moved to the South Side from Georgia after World War II as part of the Great Migration. It’s a cruel irony to see the struggles today. Population loss means young families aren’t moving into the affected communities—and senior citizens are left alone to advocate for city services and economic development. Boarded-up homes and vacant two-flats beg for custody.” (More here.)

A home that predates the Great Chicago Fire sold for over $2 million to developers who now have a demolition permit, reports Dennis Rodkin at Crain’s. “An Italianate home in the West Loop, built about a decade before the Great Chicago Fire, is headed for demolition, likely to be replaced by condos. The three-story Italianate building at 116 North Willard Court was built around 1860… The October 1871 fire stopped at the east bank of the Chicago River’s South Branch, and this building is several blocks west of the river. Thus, it’s not quite a survivor of the fire, although it’s very rare for the downtown parts of Chicago.”

“Consider paying a visit to the Medieval Torture Museum, an interactive, eight-room tour of history’s most gruesome torture methods,” advises Time Out Chicago. “Rather than displaying historical torture devices under glass, the museum [created] diorama-like set-ups that show silicone dummies—their visages crafted in the likeness of actors who posed for each scenario—being subjected to medieval-era torture methods both real and apocryphal, from a Holy Roman Empire-style breaking wheel to a Viking ‘bloody eagle,’ a ritual in which a victim’s lungs are pulled from their ribcage to resemble a set of wings… A brief wall text accompanies each installation, [with] more detailed historical context from the museum’s free audio guide.”

“When Sugar Moon Bakery opened on Wrightwood Avenue in early September, there was a line down the block of neighbors anxious to try owner Dina Cimarusti’s rustic baked goods. Three months later, interest hasn’t waned,” reports Block Club Chicago. “Cimarusti is working no less than 12 hours a day to keep up with the high demand; she even set up a cot near the kitchen so she can rest without leaving the bakery. Bakery sales are double what Cimarusti expected. Right now, Cimarusti only has one employee, but if business continues at this rate, she’ll have to hire more help. ‘It’s been really crazy… I gotta say, I’ve been in the industry for a long time and customers are usually a–holes, but … every [customer here] is just the most pleasant human I’ve ever met.’”

Why Do Chicago Restaurants Serve Split-Pea Soup On A Particular Day?

“Lots of restaurants… do serve split pea on Wednesday… But after calling or visiting some twenty establishments in the city and suburbs, we think there are just as many serving pea soup on days other than Wednesday,” reports Curious City, seeking reasons for soup specials. “Take Manny’s Cafeteria & Delicatessen in the South Loop. They make pea soup every Tuesday. Why? ‘That’s how my great grandfather decided to do it,’ says Dan Raskin, the fourth generation owner-operator at Manny’s… ‘That’s just the day that he picked for split pea soup, so we’ve always done it on Tuesday.’ Just like Monday is always Navy Bean and Wednesday is mushroom barley.”

“Jewel-Osco opened its first micro-fulfillment center Tuesday in southwest suburban Westmont,” reports the Trib. “The system uses storage-and-retrieval technology to shuttle products to a sorting area, where Jewel-Osco pickers can fill up to four orders at once, speeding the process. Robots move the completed orders to another area for pickup customers or third-party delivery services.”

Friday, December 10 is the first day tickets are on sale for the first week of Paul Thomas Anderson’s marvelous “Licorice Pizza,” in 70mm at the Music Box starting Christmas Eve. Tickets here.

Can “Community Zines” Supplant Lost Local Journalism?
“We’ll see more community zines being produced as an effective way to make news more accessible, amplify diverse voices, and help us collaborate with communities to make news — together,” reports USC associate professor Amara Aguilar at Nieman Lab. “For decades, zines have been an important part of communities. From exploring science fiction and other niche genres, to expression in the areas of arts, culture, politics, activism and more, zines have been a way that communities take ownership of their own stories in both how they are told and how they are visually presented and distributed. Zines have created journalism that is accessible, serves diverse communities, creative, collaborative and experimental. They can also drive membership and contribute to sustainability in newsrooms.”

The South by Southwest Music Festival has announced a second round of Showcasing Artists invited to perform at the thirty-sixth annual event, which takes place March 14-20, 2022 in Austin. Chicago artists include: Circuit Des Yeux, Ness Heads, Jodi and Stuck. Calendar here.

“The younger sister of famed fellow prima ballerina Maria Tallchief, Marjorie Louise Tallchief has passed,” reports the Oklahoman. “She joined the Paris Opéra Ballet in 1957, and… was the first American ever to become première danseuse étoile, or ‘star dancer,’ the highest rank a performer can reach in the legendary company… Best known for her roles in ballets like ‘Romeo and Juliet,’ ‘Giselle’ and ‘Idylle’… Tallchief was prima ballerina with New York’s Harkness Ballet from 1964 until 1966, when she retired from the stage.” She later “taught at the Dallas Civic Ballet Academy and acted as a dance director for the Dallas Ballet. In 1980, she helped her sister found and taught at the Chicago City Ballet.”

This announcement represents the second round of organizations to receive the Broadening Narratives grant. All projects promote BIPOC communities, LGBTQ+ perspectives, working-class narratives, small community experiences, as well as other underrepresented groups and viewpoints. “While the purpose of collections is to ensure that stories are preserved, many narratives are overlooked because of decisions based on race, gender, sexual identity, educational background, economic or social status, or because they are perceived to be outside the conventional thinking of the day,” David Farren, foundation executive director says in a release. “We are thrilled to announce these grant recipients and want to thank these organizations for being part of this new way forward in collections thinking that focuses on telling broader and more inclusive narratives.”

“Chicago aldermen balked Tuesday at a plan to allow sports betting at Wrigley Field, the United Center and elsewhere, despite Mayor Lightfoot’s hope that adding a two-percent city tax to the gambling returns would blunt criticism that the sportsbooks would cut into tax money collected from a planned city-run casino,” report John Byrne and Gregory Pratt at the Trib. “A joint City Council committee—which Lightfoot predicted Monday would advance the sportsbook plan—instead held it, amid ongoing questions about whether the books would hurt the casino.”

From WGN-TV: “‘What is in it for the Black people?’ asked Ald. David Moore (17th). ‘Five folks which are very wealthy, are going to get even more wealthy without having a direct impact on minorities,’ said Ald. George Cardenas (12th)… ‘We should hold off on this until we get the casino up and going,’ said Ald. Anthony Beale (9th).” Gambling companies have raised concern that sports betting at five stadiums would take money from the eventual casino. “Casino magnate Neil Bluhm of Rush Street Gaming warned City Council: ‘Less people will come to the Chicago casino when they can bet on sports at the stadium.'”

“State regulators on Wednesday named their chosen developers to break ground on a new casino in Waukegan and another straddling the border of south suburban Homewood and East Hazel Crest, ending a selection process that dragged on for more than two years,” reports the Sun-Times. “State regulators rejected bids from Matteson, as well as a Waukegan proposal from a former state senator who poured thousands of dollars into local elections.”