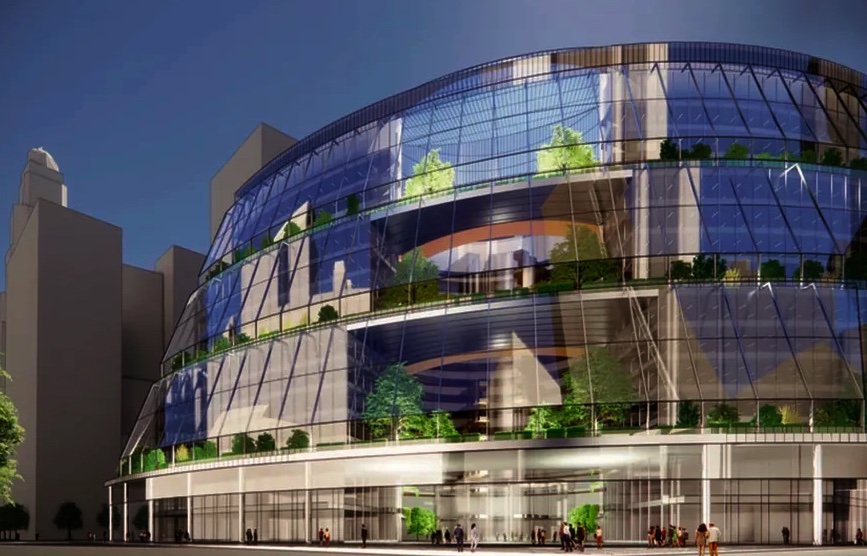 Kavi Gupta presents a pop-up exhibition in Palm Beach with works by Deborah Kass, James Little, Mary Sibande, Inka Essenhigh, Kour Pour, Roger Brown, Young-Il Ahn and Miya Ando, as part of the Arts & Conversations series, presented by actor and art collector Regan Rohde. This chance to share the work of these artists at this time aligns with “our ongoing mission to amplify the voices of diverse and underrepresented artists to expand the canon of art history,” the gallery writes. The exhibition is at Rohde’s Dixie Highway gallery space in the heart of Palm Beach, two blocks south of the city’s Norton Museum.

Thompson Center Sold for $70 Million, Will Be Preserved

“Governor JB Pritzker said the state entered exclusive negotiations with the Prime Group in a deal worth $70 million,” reports WGN-TV. “Pritzker said the new owners will keep the building intact and develop executive offices, retail, and hotel space. He said they will move forward on a ‘public-private partnership.'” Sun-Times: “A development team will take over the building, with the state retaining about a 30% ownership… Pritzker chose a proposal from a group led by Michael Reschke, chairman of Prime Group, a longtime developer in the region… Reschke said he expects the sale to close within six months and construction on the renovation to start within a year. [The] project, a ‘gut renovation’ including a new glass curtain wall and mechanical systems, should take two years from start to finish, with a budget of $280 million.”

A five-story building with a seven-car garage will take the place of the pre-Fire home erased last week, reports Dennis Rodkin at Crain’s. “A building permit issued last week by the city offers a few tidbits on the seven-unit residential building that will replace the building that stood on Millard Court for more than a century-and-a-half.”

It’s 13,000 square feet, but it’s something, reports Crain’s Chicago Business. “USA Lindbergh owns the three retailers opening stores at Block 37: Lindbergh, a Danish menswear brand… leasing about 5,800 square feet on the second floor; Designers Market, a women’s apparel retailer leasing 4,400 square feet on the second floor; and Candle Time, which will sell candles, fragrance diffusers and other products from a 2,600-square-foot store on the ground floor.”

“The growing sense that the job of Choose Chicago CEO is one no one might want could have ugly ramifications for the city’s hospitality economy and the hundreds of millions of dollars in tax revenue it generates,” writes Danny Ecker at Crain’s.

“If they don’t act, they are going to destroy an industry,” reports the Boston Globe. “The $28.6 billion fund was created as part of the American Rescue Plan and designed as a lifeline for restaurants. But its rollout this summer was pockmarked with problems. The fund quickly became oversubscribed, and nearly two-thirds of the applicants—a total of 177,000 restaurants and bars—were denied funding. The Independent Restaurant Coalition estimates that eighty-six percent of operators who didn’t receive grants risk closing permanently without relief.”

“Thai restaurant Rosded has closed, ending more than four decades of family ownership for the small, dine-in eatery in the heart of Lincoln Square,” reports Block Club Chicago. “We just couldn’t survive anymore,” the daughter of two of Rosded’s founders said. “I wish we could stay open, but it’s a sign of the times.”

Six months ago, “the sudden closure of Yugen, the lauded Japanese restaurant in West Loop, shocked Chicago’s fine dining fans,” reports Eater Chicago. “It was the second abrupt shutter in the space in three years, following the well-publicized demise of three-Michelin-starred Grace.” Owner Michael Olszewski has a replacement lined up: Aikana Chicago, “a world-inspired pan-American experience.” to open in January. “Aikana will serve an a la carte menu featuring Central and South American cuisine. It’ll also offer a cocktail menu from veteran beverage director Benjamin Schiller… that plays on Latin American flavors and ingredients. The sleek, minimalist dining space will be transformed into a ‘lush jungle interior.'”

“International cafe giant Starbucks is the latest coffee chain to see pro-union workers usher in a new era of labor organizing within the hospitality industry, with a group of baristas last week in Buffalo, New York, voting to become the first unionized outpost of the brand’s 9,000 corporate-owned U.S. stores,” reports Eater Chicago in an extensive survey. “Starbucks’ historic vote comes about four months after some Chicago coffee workers prevailed in their own tumultuous union fight with Colectivo Coffee, a Wisconsin-based chain with five Chicago-area locations. At Colectivo, organizers and management spent more than a year locked in a contentious battle over a vote to join the International Brotherhood of Electrical Workers.”

New Bookstores On South Side

“Iesha Malone is working on bringing a reading cafe to Roseland to help kids and others in her community have a space to escape into a book and be inspired by stories,” reports the Tribune. “Verlean Singletary opened Da Book Joint in Bronzeville in November, with the same goal as Malone—to give South Side residents, especially youth, better access to books. Most books in Malone and Singletary’s shops feature Black characters and often are written by Black authors. Both women have also found ways to raise donations and provide books to children for free.”

Steppenwolf Theatre Company is opening its in-the-round Ensemble Theater with the Steppenwolf for Young Adults world premiere adaptation of Eve L. Ewing’s “1919,”adapted by J. Nicole Brooks and directed by Gabrielle Randle-Bent and Tasia A. Jones, playing February 2–March 6, 2022. “‘1919’ is a bold, lyrical examination of the events surrounding the killing of seventeen-year-old Eugene Williams in treacherous waters off the segregated 1919 Lake Michigan shoreline, and the way those events reverberate in Chicago today,” Steppenwolf relays. The cast for 1919 includes Sheldon Brown, Jessica Dean Turner, Lachrisa Grandberry, Victor Musoni, Max Thomas and Sola Thompson. Steppenwolf will have twenty-four public performances for “1919,” weeknights and weekends, along with weekday student matinees. “1919” is one of two productions inaugurating the Ensemble Theater this season; it is followed by ensemble member Yasen Peyankov’s adaptationof Anton Chekhov’s “Seagull,” featuring an intergenerational all-ensemble cast, running from April-June 2022.

Sideshow Theatre Company has added ten new company members, including ensemble members estrellita beatriz, Adelina Feldman-Schultz, Hanna Kime, Tina Muñoz Pandya and Shariba Rivers and Artistic Associates Sam Boeck, Olivia Canaday, Sydney Charles, Micah Figueroa and Mallory Raven-Ellen Backstrom. Sideshow artistic director Regina Victor says in a release, “One of the greatest gifts of being the artistic director of Sideshow Theatre Company is the ability to collaborate with the ensemble to cultivate a community that reflects our artists, and our city. This past year we have spent time identifying our values and evaluating our ethics, which lets us be specific about who we are becoming, and who we want on that journey. We are all such huge fans of these artists, fans of their intellect, talent and values. Each of these artists represents the future of Chicago theater in their own unique way, and I cannot wait for Chicago to get to know them even better through this affiliation.” More here.

Chinatown leaders worry that a Chicago casino near Chinatown could make gambling problems much worse, reports Block Club Chicago. “Some Chinatown community leaders don’t want a casino [nearby]. Without added resources about gambling disorders, they say it risks exploiting already vulnerable populations… Gambling is a recreation in Chinese culture, local leaders say, but because it is so common, the lines between leisure and addiction easily blur.”

“Chicago Mayor Lori Lightfoot got the City Council Wednesday to greenlight sports betting at Wrigley Field, Soldier Field and other Chicago stadiums, despite criticism from some aldermen convinced doing so will hurt tax revenue from a planned city casino,” reports the Trib.