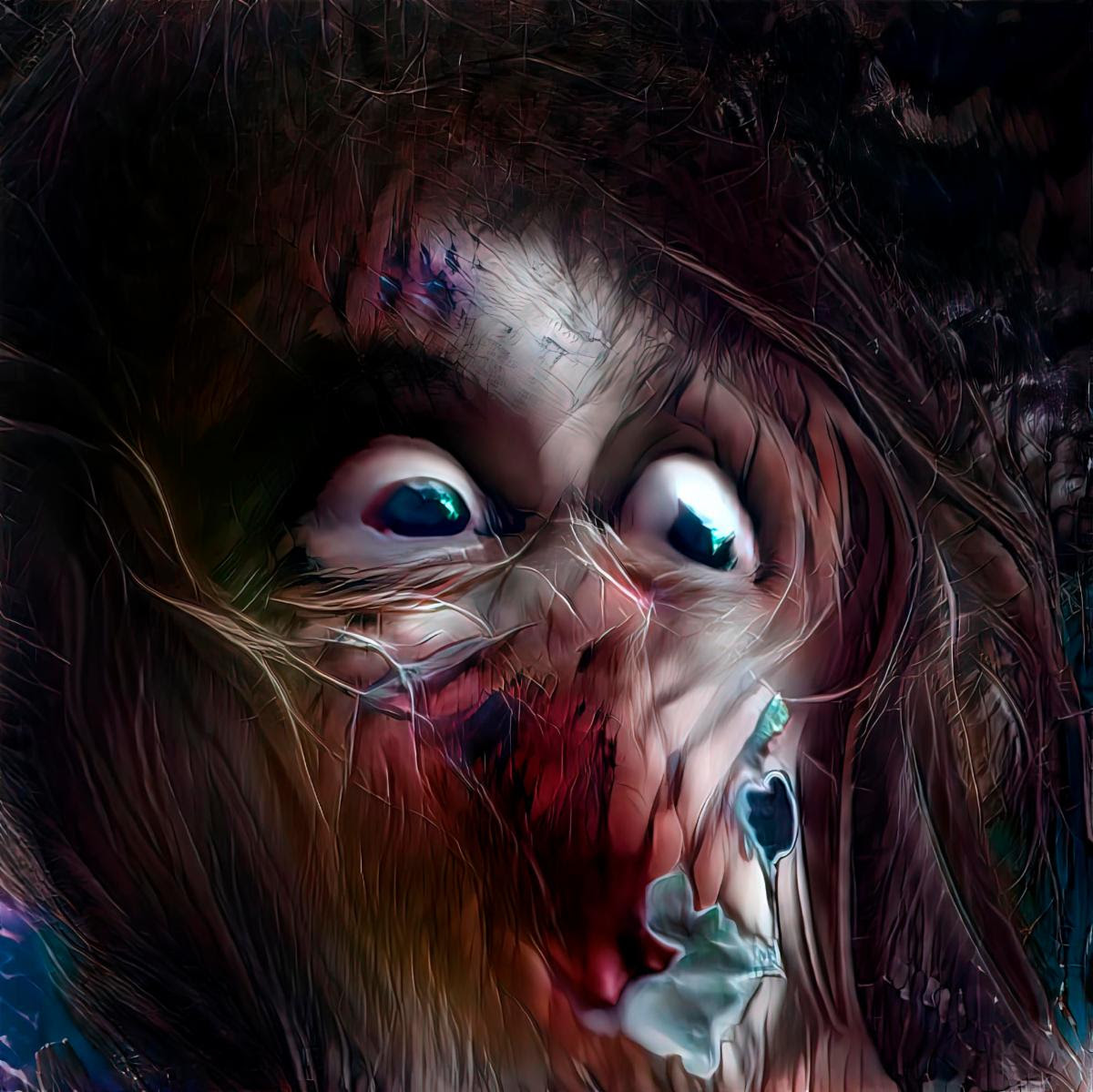 For the fourth solo exhibition by Rachel Niffenegger [2010 Newcity Breakout Artist] with Western Exhibitions, “Opia,” writes the gallery, the artist “braves familiar faces in curious and experimental new media. Specters the artist previously conjured through paint pours are now generated through an obsessive digital breeding process, which combines artificial intelligence and sublimated aluminum. These wraiths are suspended amongst haunted furniture, pulled from the folds of psychedelic clay, and spiraled through mirrored metalwork. A precarious steel and brass tête-à-tête chair and uncanny rug divides the gallery. The psychological seating presents a space to ponder our unbecoming, and observe the haunted underscores of ourselves and homes in the process.” The show runs Saturday, January 15-February 26.

Boston Consulting Group is closing a deal to relocate its Chicago office to the Fulton Market District, reports Crain’s, “a move that could signal a new era of major professional services companies planting their flags in the former meatpacking district. The firm is in advanced talks to lease around 200,000 square feet at a new office building developer Sterling Bay has proposed at 360 North Green.” The company “would move from its longtime office at 300 N. LaSalle St., where its current lease expires in 2024.”

“DAAM is an acronym for ‘Designers, Architects, Artists and Makers’, and it’s a name that aptly summarises this cross-disciplinary, energetic young studio’s stance and deeply collaborative and hands-on culture,” writes Wallpaper magazine. “‘DAAM (pronounced “dam”) was a purposefully bold choice,’ explains the studio’s Chicago-based founder, Elyse Agnello. ‘It serves to focus attention on our work process and product rather than our authorship, and its playful irreverence reflects our design aspirations.’ … Agnello set up DAAM in 2016 and was soon joined by current co-director Alex Shelly. Together they lead a small team of two to six people, pursuing ‘the type of work that valourises neighborhoods, breathes new life into abandoned structures, inspires a better future, and creates new ways for people to live, learn and be together.’ Seeing themselves as a ‘people-centric’ practice, they place conversation and function at the heart of their design process—form comes after.”

“Robin McFolling is Chicago’s sausage queen. Heiress of the legendary Parker House Sausage Co., McFolling is the third generation to reign over her family’s centenarian South Side sausage factory, where she’s been its president since 2013,” writes the Trib. “The original ‘Sausage King’ was Judge Parker, McFolling’s grandfather, who started Parker House in 1919. Today, it is one of the oldest meat processors in the country. It is also one of the oldest Black-owned businesses in the country. In guarding this glory of a legacy, McFolling must extend it with her own vision.”

Reports Richard Morgan at the Washington Post: “Last year, [Chicago’s] Boystown gayborhood faced a racial reckoning after one bar owner tried to ban rap music and others were accused of oppressive dress codes and underpayment of non-White staff. That summer’s Drag March for Change alleged broad racism, sexism and transphobia among LGBT Boystown businesses. Into this fray—not just the sweeping upheaval of the pandemic—two Black lesbian friends, Angela Barnes and Renauda Riddle, opened a bar in May in Andersonville, Boystown’s lesbian foil. It’s called Nobody’s Darling, plucking its name from an Alice Walker poem: ‘Be nobody’s darling. Be an outcast.’ Fittingly, the bar is iconoclastic, not just for being Black-owned or queer-owned or women-owned—let alone all three—but for being women-centered, as well. ‘The Lesbian Bar Project,’ a 2020 documentary… chronicled the startling dearth of U.S. lesbian bars: by its count, just twenty-one left nationwide… Barnes, fifty-two, and Riddle, forty-one, met ten years ago on a women’s action committee at a gay community center. It shows. ‘We’re a community-based bar. We’re providing a space for connection and support,’ Riddle said. ‘We have a space where our only expectations are respect, relaxation and refreshment. It’s safe, and it’s resonating.'”

“Workers at a downtown Starbucks have become the first in the Midwest to request a union certification vote at the coffee chain, which is facing organizing drives at other outlets around the country,” reports the Sun-Times. “Employees at the 155 North Wabash store submitted signed cards Thursday seeking to join an affiliate of the Service Employees International Union. The cards were turned in to the National Labor Relations Board… An overwhelming majority of the store’s roughly fourteen workers, most of them part time, signed cards asking for an election.”

January 11 is the date for Michael Caplan’s “Algren” on VOD, iTunes and Apple TV. Distributor First Run Features notes that the documentary “includes never-before-seen archival footage, newly uncovered audio recordings and his own rarely seen personal photo collages [and] charts the rise and fall of a man whose transgressions, compassion and thirst for justice pushed him to dedicate his life and career to giving a voice to the voiceless. Through interviews with Algren’s friends, literary experts and artists–including William Friedkin, Russell Banks, Philip Kaufman, Billy Corgan and John Sayles–the film is an intimate, witty and even antagonistic portrait of a tireless champion of America’s most marginalized.”

Washington Post columnist Margaret Sullivan alerts the media: “In the year since the January 6 insurrection, mainstream journalists have done a lot of things right. They’ve published major investigations, pointed out politicians’ lies and, in many cases, finally learned how to clearly communicate the facts of what happened leading up to that horrendous riot at the U.S. Capitol—and what is happening now as pro-Trump Republicans steadily chip away at the very checks and balances that saved American democracy last year. Much of this work has been impressive. And yet, something crucial is missing. For the most part, news organizations are not making democracy-under-siege a central focus of the work they present to the public… That American democracy is teetering is unquestionable. January 6 is every day now, in the words of a recent New York Times editorial that noted the growing evidence: election officials harassed by conspiracy theory addicts, death threats issued to politicians who vote their conscience, GOP lawmakers pushing measures to make it harder for citizens to vote and easier for partisans to overturn legitimate voting results… Put that pro-democracy coverage in front of your paywall… Don’t be afraid to stand for something as basic to our mission as voting rights, governmental checks and balances, and democratic standards. In other words, shout it from the rooftops. Before it’s too late.”

“Perhaps the most famous piece of music that ever debuted in Chicago, 100 years ago… was first performed here and not New York or Paris or Moscow because Chicago was home to the International Harvester Co.,” writes Neil Steinberg. “‘A musical lollypop’ [first] conducted at the Auditorium Theatre.”

The final sixteen shows of playwright Lynn Nottage’s “Clyde’s” will be streamed live for $60, reports the New York Daily News. “The events of the last 18 months have shown us that there is an appetite for theater in all of its forms and we are excited to bring a simulcast of our Broadway production… in real time to theater fans,” Second Stage executive director Khady Kamara and Assemble Stream’s Katie McKenna said in a joint statement, the paper relays. “Nothing will ever replace the experience of attending a Broadway show but these simulcasts hope to [provide] the one-of-a-kind thrill of a live Broadway performance for audience members who are unable to attend the play in person.”

“A new indication of how difficult it has become to sustain a Broadway show during the Omicron surge,” reports the New York Times: “’Mrs. Doubtfire’ will close for nine weeks, laying off all employees, in the hopes that a short-term hiatus will make possible a long-term run.”