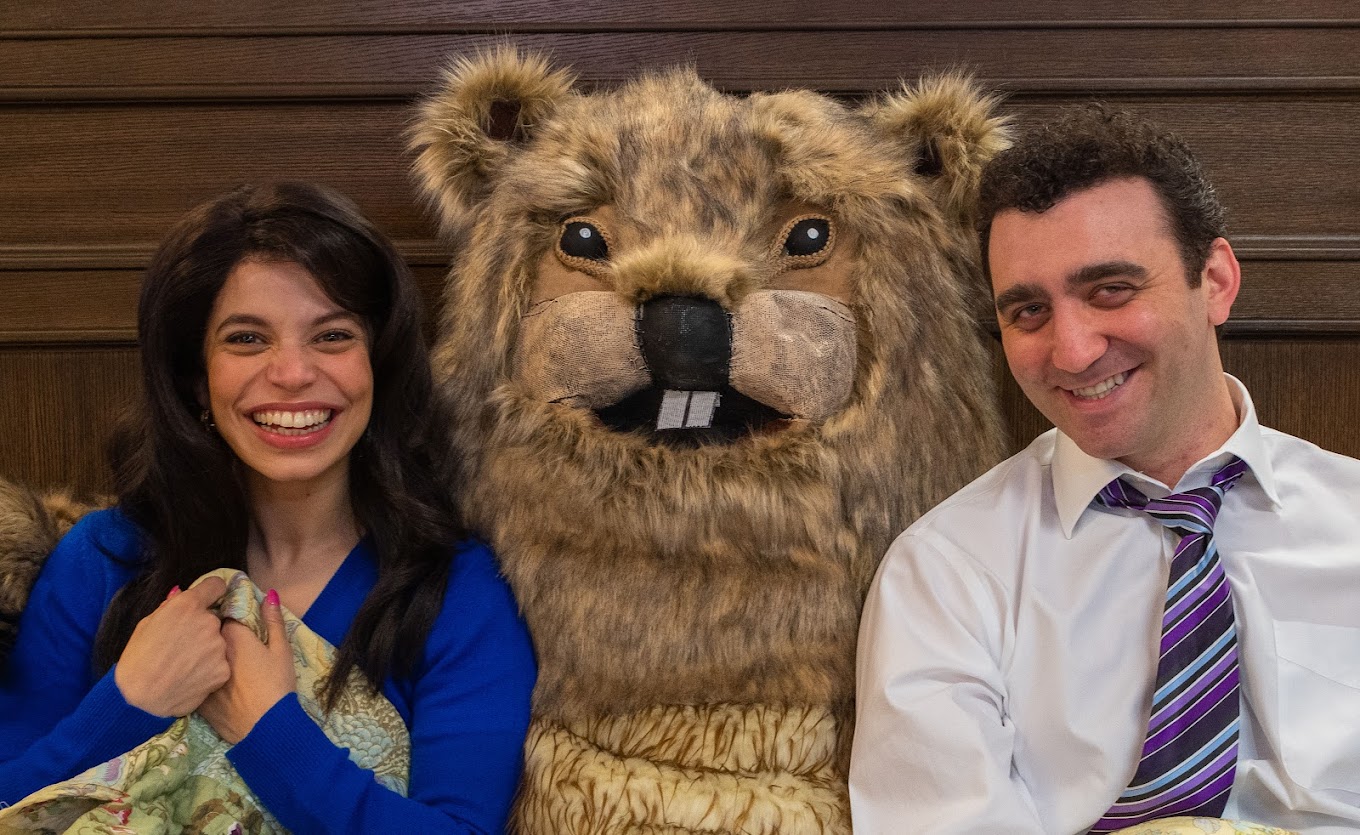 “Private Quarters III” is on view at Volume Gallery through February 26, part of “an ongoing series of exhibitions focused on giving further context to work by the gallery’s designers and artists,” the gallery announces. “A rumination on domestic space, this group show feature work by Ross Hansen, Jennefer Hoffmann, Christy Matson, Jonathan Muecke and Thaddeus Wolfe. Details here.

A chunk of aluminum cladding fell off the Hancock building, reports Block Club Chicago. “Representatives of the Hearn Company, owners and operators of the building formerly known as the John Hancock Center, and Ald. Brian Hopkins (2nd) said a piece that covers part of the building’s X-bracing came off due to high winds.” The chunk fell onto a planter and no one was injured.

The Chicago City Council has approved rezoning part of West Fulton and West Randolph, converting stretches of both streets into pedestrian streets, reports YIMBY, but that does not mean the streets will be closed to traffic. The designation is applied to other city streets, including 18th Street in Pilsen.

Fast Company writes about trends in adaptive reuse. “Buildings generate almost forty percent of annual global CO2 emissions, and eleven percent of that comes from materials and construction. The most sustainable buildings are the ones that already exist. So, what if we made a collective decision to not build a single new building next year and instead, focused on reusing what we already have? A year-long building moratorium is a radical approach, and it comes with obvious shortcomings, but looking at our existing building stock could help with more than just the climate. In the last three years, nearly 800 old buildings have been repurposed into apartments. And as the pandemic continues to shutter properties across the country, more buildings like offices, hotels, and malls could enter the draw.”

Lost Lake has news on Instagram: “We’ve been trying to ward off this moment, but as it turns out, a super-spreader surge that wiped-out what would usually be our busiest time of year was the last little straw this camel could handle. Thursday, January 13 is our seventh birthday—and it will also begin our last weekend of service. Maybe someday we’ll be back in one form or another, but it looks like this is it for now… Thank you so much for all the support, from our very first day until this one. You’ve made a lot of dreams come true over here.” The Trib writes: “Lost Lake opened in early 2015 as a tiki-themed bar after acclaimed beverage director Paul McGee departed another well-regarded tiki-themed bar, Three Dots and a Dash. Lost Lake quickly became one of Chicago’s most esteemed cocktail bars, and was a finalist for a national James Beard Foundation Award for Outstanding Bar Program… in 2019 and 2020. After closing because of the pandemic in March 2020, Lost Lake pivoted to sell bottled cocktails-to-go…When it finally reopened last summer, it did so without the tiki motif, which has come under fire for cultural appropriation.” [Newcity’s December feature story on Chicago-area tiki bars, including Lost Lake is here.] Eater Chicago: “The bar is part of Chicago-based hospitality group Land & Sea Dept., also behind hits like Longman & Eagle and Parson’s Chicken & Fish.” The Tribune continues: “In addition to the Beard nominations, it was named one of Esquire magazine’s best bars in America in 2017. In 2018, it was named best American cocktail bar at Tales of the Cocktail’s Spirited Awards and one of the World’s 50 Best Bars.”

The family that owns Alexander’s Restaurant has bought the property housing the former Jeri’s Grill at 4357 North Western and will open a branch there this spring, reports Block Club Chicago. “Jeri’s was among a dying breed of twenty-four-hour diners throughout Chicago when Frank Di Piero, son of original owner Anice Di Piero, announced its closure in May 2020.”

All Too Well Coming To Armitage

Sandwich shop and market All Too Well will open in Lincoln Park this year. From Mitchell AbouJamra, chef-owner of Evette’s Chicago, All Too Well will offer artisan sandwiches, grab-and-go items, Passion House coffee, cured meats, cheeses, everyday essentials and locally sourced goods at 352 West Armitage. “Jamra wants to cater to the bustling neighborhood all year round, and will focus on creating items for the picnic crowds heading to Lincoln Park, Lincoln Park Zoo, and the beaches during warmer months,” the spot relays in a release. Jamra is working with the Alderwoman’s office and city to rezone their block to add a wine and spirits portion to its shop. “Coming from a multi-generational family of market and deli owners, Jamra plans to carry on his family’s legacy with a modern take on the classic market. ‘My family has owned delis, butcher shops, and neighborhood markets for decades. It’s my generation’s time to follow in their footsteps,’ says Jamra. ‘I’m excited to bring this concept to the neighborhood and create another way to share my family’s heritage and culture through food.'” More here.

“The owner of the Portage Theater faces a second lawsuit, from investors,” reports the People’s Fabric website, “who allege in part ‘$510,077 has gone missing,’ while the owner continues discussions to obtain a city-funded grant to subsidize repairs to the landmark theater… The Six Corners Chamber of Commerce says they are still working with the City and the owner of the Portage Theater to obtain grants to subsidize improvements to the theater, despite the owner’s legal problems and failure to pay property taxes for nearly three years.”

Michael Wilmington, the Chicago Tribune film critic for fifteen years, “a singular, ardent lover of cinema,” died Thursday in Los Angeles. The Trib’s Michael Phillips recalls his predecessor: “Wilmington was often seen at screenings and festival events accompanied by his mother.” [She was known to all as “Mrs. Wilmington.”] “She was enough of a fixture to be made an honorary member of the Chicago Film Critics Association. She died in 2009. Wilmington wrote extensively on film for Madison’s alternative weekly, Isthmus, among other publications. Moving to LA, he wrote steadily for the Los Angeles Times from 1984 to 1993. He moved to Chicago in 1993 to take the full-time staff film critic job at the Tribune, writing after his Tribune tenure for the Movie City News website. His final review for that Los Angeles-based website, on Jim Jarmusch’s ‘Paterson,’ appeared in late 2016.”

“Perry Kanlan danced so long and hard on Chicago’s nightlife scene that his nickname evolved from ‘Dancin’ Boy’ to ‘Dancin’ Man,'” writes Maureen O’Donnell at the Sun-Times. “Every time James Brown saw him,” his friend Thomas Spraggins said, “he brought him onstage. If you can dance with James Brown, you gotta be a bad man.”

Steppenwolf Theatre Company has postponed its Steppenwolf for Young Adults world-premiere adaptation of Eve L. Ewing’s “1919,” with the intention of producing the show in the fall. (The production was scheduled to open next month.) “Following conversations with the creative team of ‘1919,’ we have determined that postponing the production is in the best interests of the play, artists and audiences,” artistic directors Glenn Davis and Audrey Francis say in a release. “A core audience we aim to serve with Steppenwolf for Young Adult productions are teens and school groups, which is especially challenging during this surge. We look forward to introducing Chicago audiences and students to this bold and lyrical new work at a time when we can gather together safely. Our education and artistic teams are currently working to determine an alternate program for students and teachers this spring.” No other Steppenwolf productions have been shifted, including “King James” (March 3–April 10); “Seagull” (April 28–June 12); “Mike Birbiglia: The Old Man and the Pool” (April 28–May 22); and “Choir Boy” (June 16–July 24). More here.

“The theatrical magic keeping Broadway going during the latest coronavirus surge has been the unheralded performers ready to step into any role in an emergency. Then there’s Carla Stickler, who had actually left show business but returned to rescue ‘Wicked,'” reports Associated Press. “Stickler, who had launched a new career as a software engineer in Chicago three years ago, canceled her winter vacation and returned to New York to star as the green-skinned Elphaba while the cast was ravaged by illness.”

“Groundhog Day: The Musical”‘s Got You, Babe

Regional Premiere Of “Ernest Shackleton Loves Me” Pushed Back

Skylight Music Theatre in Milwaukee announced a one-week postponement of the regional premiere of “Ernest Shackleton Loves Me” due to positive results “among the fully vaccinated company.” The musical will run January 21-February 6. More here.

The Joffrey Ballet starts its year with the remount of Yuri Possokhov’s fresh interpretation of “Don Quixote,” as part of the Joffrey’s first-ever season at the Lyric Opera House, February 16–27. More here.

Proboscis Theatre has canceled performances of “Queens of Infinite Space” that were set to run at Epiphany Center for the Arts January 16-21. More here.

Run Of Local-Cast “The Play That Goes Wrong” Extended

The Chicago production of “The Play That Goes Wrong,” featuring a cast of local Chicago actors, will extend its limited engagement by nine weeks through April 3 at Broadway In Chicago’s Broadway Playhouse at Water Tower Place for a total run of sixteen weeks. Tickets here.

Named one of the “ten legendary head shops” by High Times, “Adam’s Apple opened in spring 1969. In the early days, it was one of the few places in the city to buy rolling papers and other paraphernalia for the burgeoning pot culture,” reports Block Club Chicago. “The shop serves as a blast from the past, offering… pipes, papers, bongs, dugouts, stash boxes… The dank, below-grade shop is filled with stickers, posters and other decor that is indicative of such head shops. But few shops in the city can claim this level of counterculture authenticity.” Seventy-five-year-old owner Shelly Miller will retire at the end of the month.

Arts supporter Claire Barancik was active in the Chicago art world in the 1980s, and in 1977 she was co-chair of The Crystal Ball, the annual fundraiser for Michael Reese Hospital. She was on the board of the Howard Brown Health and AIDS Foundation of Chicago as well as the Monterey Symphony. Obituary here.