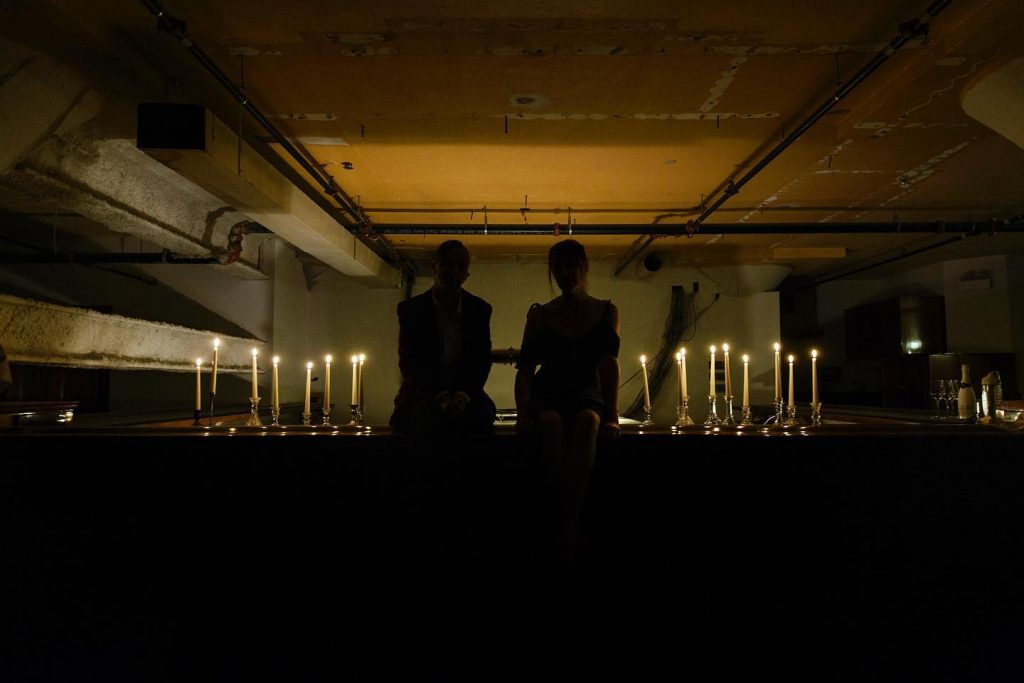 “When chef Zoe Schor first opened Dorothy—a 1970s-inspired cocktail den in the basement of her West Town restaurant Split-Rail—on Valentine’s Day 2020, it felt like a huge win. She and Michelle Szot, Split-Rail’s general manager and beverage director, had worked toward the opening for three years, and at last the pair could unveil the queer-friendly bar of their dreams,” reports Eater Chicago. “Twenty-nine days later, on March 15, 2020, as the virus arrived in Chicago, Governor Pritzker ordered all Illinois restaurant and bar owners to close for two weeks. Dorothy has remained dark ever since. That is, until this week, when Schor and Szot threw the doors open at last to welcome patrons back.”

Takeout Utensils Must Be Requested

A single-use foodware ordinance is in effect in Chicago, reports WTTW, “meaning disposable utensils will no longer be included with an order unless specifically requested by the customer. The law applies to delivery and takeout only, not dine-in.”

“One of my first jobs was at Olive Garden in Ann Arbor. I was a terrible server because I was super shy and awkward. If I have a stress nightmare, it’s not about cooking; it’s like I’m still a server, running around like crazy,” chef Stephanie Izard tells Chicago magazine. “I was working as a server for an old friend when I told him I was going to open a restaurant. He goes, ‘Don’t do it. It’s terrible.’ What if I had listened to him? We’ve gotten to where we are because I’m a risk-taker.”

“The ‘Betty White Challenge’ exploded in popularity, with people all across the country encouraged to donate $5 to a shelter of their choosing,” reports WGN-TV. “Betty White is an Oak Park native. She was here in the 20s. We weren’t quite open yet… She is, as everyone knows, a lifelong animal lover and advocate,” Kira Robson, executive director at Animal Care League told the station. “We feel very honored to be her hometown shelter. That’s why we’ve had so much fun this weekend.”

“The seven A.V. Club workers in Chicago have decided to take their union-contract-protected severances rather than move to L.A. without a cost-of-living adjustment,” the Onion Union reports via Twitter. “They would have liked to have continued working at A.V.C. But it’s not reasonable for G/O Media to expect people to uproot their lives for a pay cut and to commute every day to an inconveniently located office for a company that treats its employees the way G/O does. The Chicago-based employees comprise seven of the nine A.V. Club staff members with the longest tenures. It seems clear that G/O Media wants to push out these veteran employees in order to replace them with lower-paid workers. The move also works to dismantle The A.V. Club’s reputation for pop culture criticism created by incisive outsiders who are unbeholden to the industries they cover, in favor of converting it into a more generic ‘entertainment’ site. The A.V. Club will be losing its managing editor, film editor, TV editor, associate editor, senior writer, assistant editor, and editorial coordinator. These workers oversee the site’s film, TV, music, comics, and books coverage, and are essential to its daily operations. G/O rarely pays new workers above the minimums delineated in the union contract, which was bargained with most union members in Chicago. In fact, G/O’s HR reps have told job candidates they can’t negotiate for salaries above the minimums, because ‘the union won’t allow it.’ To be clear, the Onion Union understands what ‘minimum’ means and has fought to get members the pay they deserve from a company that rarely gives more than legally required. In short, those who replace the departing A.V. Club workers will almost certainly be underpaid too.“

“It was two years ago today when DePaul journalism students Hillary Flores, Jonathan Aguilar, Izabella Grimaldo and myself launched Chicago’s first Latino student newspaper—La DePaulia,” write the paper’s editors. “All from different backgrounds and walks of life—we had one thing that united us: our mission to establish a Spanish speaking platform that would provide us the space to report on DePaul’s and Chicago’s Latino community. At that time of launching, little did we know of the doors and blessings La DePaulia would open and the stories we would cover.”

At Artforum, Bill Callahan and William Oldham talk about their collaboration, “Blind Date Party,” on Zoom with Sasha Frere-Jones.

On Our Team Launches System For Pay Equity In Theater

On Our Team has developed a first-of-its-kind tool to help theater companies establish pay equity within their organization and serve as a public recognition for equitably paid theater, the group announces. “The Pay Equity Standards were developed to address increasing calls for equity and the current arts and culture sector needs. The arts and culture industry added $919.7 billion to the nation in 2019 and the industry includes 5.2 million workers with a total compensation of $447 million… Yet, as a UNESCO study from 2019 titled Culture & Working Conditions for Artists stated, ‘the largest subsidy for the arts comes not from governments, patrons or the private sector, but from artists themselves in the form of unpaid or underpaid labor.’ Calls for a more fair and equitable industry have become more urgent than ever as the theater industry navigates the pandemic, renewed calls for diversity and access within the industry, and mass unemployment of theater workers. The Pay Equity Standards were developed out of hundreds of hours of interviews with producers and theater company executives, and feedback from artists, staff, and leaders of theater companies of all sizes across the country. Designed as a checklist, the Pay Equity Standards lay out a path to establishing equitable pay using a three-pronged approach to pay equity: Transparency, Working Conditions and Accountability.” More here.

Goodman Theatre’s new year begins with a major revival of August Wilson’s “Gem of the Ocean,” nearly two decades after the play premiered on the same stage. Resident director Chuck Smith, who served as the original production’s dramaturg, directs a cast of seven—featuring Sharif Atkins, Sydney Charles, Lisa Gaye Dixon, Gary Houston, Kelvin Roston, Jr., A.C. Smith and James A. Williams. Originally directed by the late Marion McClinton at the Goodman in 2003, “Gem of the Ocean” is the play that chronologically launches Wilson’s “American Century Cycle”—ten plays, each set in a different decade of the twentieth century, that together chronicle a century of the African American experience. The production runs January 22–February 27; tickets here.

“People Are Hungry For Puppetry”

The International Puppet Theater Festival is returning, and Neil Steinberg opines at the Sun-Times. “When we see puppets, we see ourselves in the puppets’ experience,” Chicago puppeteer Blair Thomas, festival founder and artistic director tells Steinberg. “When we are caught up in the suffering of the pandemic, the puppet world is not caught up in that, but reflecting back, a mirror to us.” Says Sandy Gerding, the festival’s executive director, “People are hungry for puppetry… There is a spiritual need to gather in the city, and we have a role to play. We’re helping to [bring out] many theatergoers in many neighborhoods. It’s really powerful.”

Congo Square Presents “What To Send Up When It Goes Down”

Congo Square Theatre Company, GRAY and Theaster Gates’ Rebuild Foundation will jointly present the Chicago premiere of “What to Send Up When It Goes Down,” the critically acclaimed play by award-winning playwright Aleshea B. Harris. Described as a play-pageant-ritual-homegoing celebration, “What to Send Up When It Goes Down” “responds to the gratuitous loss of Black lives and interrupts discourses that enable the ubiquity of racialized violence in our society,” Congo Square relays, “a participatory, shapeshifting experience intent on creating space for collective catharsis, cleansing and healing. The performance unfolds as a series of vignettes which employ forms including parody, song, movement, and facilitated dialogue. Breaking the fourth wall, cast members enact the script differently in each performance as members of the audience are invited not only to behold the piece as spectators, but to become part of the current that holds the story together. The intimate, interactive ninety-minute work will be co-directed by Congo Square artistic director Ericka Ratcliff and ensemble member Daniel Bryant and feature ensemble members Ronald L. Conner and Anthony Irons along with Jos N Banks, McKenzie Chinn, Victor Missoni, Alexandria Moorman and Penelope Walker.” The performance will be at GRAY Chicago, 2044 West Carroll, from March 31-April 16 and Rebuild Foundation’s Stony Island Arts Bank from April 21-May 1. More here.

3Arts, the Chicago-based nonprofit organization, has added four dance and theater artists to its Disability Culture Leadership Initiative, an online platform that elevates the work of deaf and disabled artists and encourages the arts and culture sector to prioritize Disability Culture in programming and organizational efforts. The new featured artists are Brian Balcom (theater director), Tsehaye Geralyn Hébert (playwright), Willyum LaBeija (dancer), and Robby Lee Williams (dancer). All artists are recent alumni of the 3Arts-Bodies of Work Residency Fellowships, a program focusing on the creation of new work, professional development, and advocacy for Disability Arts & Culture. Says 3Arts executive director Esther Grisham Grimm: “This web platform is more than a resource for the field. It reflects an ever-expanding network of deaf and disabled artists in Chicago who support each other through and beyond their art, and we look forward to working closely with them as they continue to raise the bar each year.” More here.

The International Latino Cultural Center of Chicago has added Matthew “Mateo” Mulcahy as its deputy executive director: “Mateo will be in charge of promoting and elevating our presence as an integral player in the Chicago cultural scene, assist in the management of existing marketing strategies and the development of new ones, nurture existing financial supporters while seeking new revenue sources, and assist on the Center’s current programming and develop new ones as well,” relays the ILCCC.