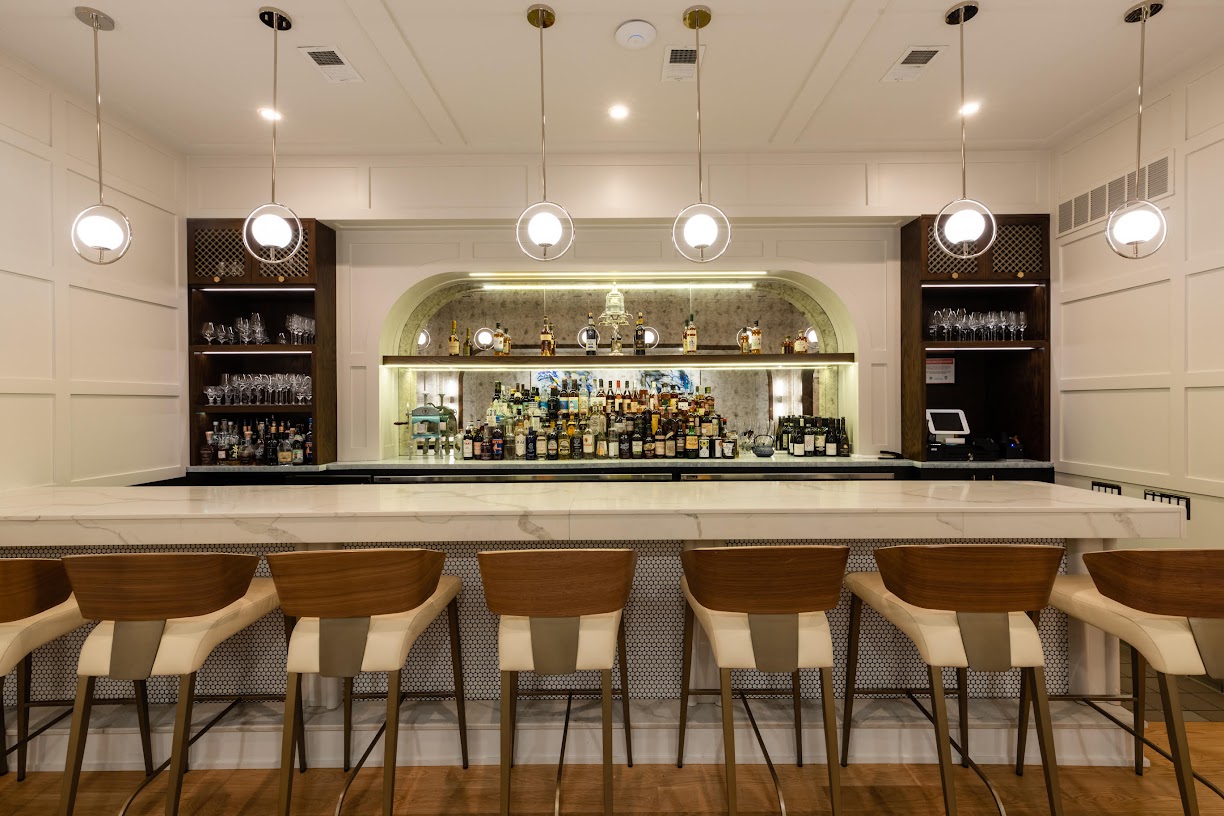 The bar at Claudia

Louis Vuitton presented its fall-winter 2022 menswear collection, reports The Cut, the last by Virgil Abloh. “‘When it’s all over and our time is no longer, we leave it behind for others to seek their own dreams,’ says poet Kai-Isaiah Jamal in the short film preluding the runway show, dubbed ‘The [infinity]th Field.’ While last December’s ‘Virgil Was Here’ at Miami Art Basel was a tribute to the recently deceased designer and a reshowing of his spring-summer 2022 show from last June, ‘The [infinity]th Field’ was his eighth and final runway show.”

Vornado Realty Trust has a plan to build a twenty-six-story, 288-unit tower at the southwest corner of Kinzie and Canal streets near its Merchandise Mart property, reports the Sun-Times. Plus: renderings of the pricey Mart facelift are here.

Tishman Speyer has contracted for its second Chicago workspace project, to build on the present site of a carwash on the edge of Futon Market, reports Ryan Ori at CoStar News.

Axios Chicago lists some of the biggest of the big developments of 2022. “New projects on the North and South sides of Chicago could change the way we look (and live) for years to come.”

“The iconic Morton Salt branding and logo has emerged for the main shed at the former Morton Salt Factory in West Town,” reports YIMBY Chicago. “This refurbished roof is part of an adaptive re-use scheme by R2 Companies, Blue Star Properties, and Skydeck. These plans at 1357 North Elston involve the conversion of the facility into a new entertainment and office venue.”

“Katie Lauffenburger has a three-month waitlist of customers paying $5,000 and up for her one-of-a-kind, ten-inch homes,” reports Mack Liederman at Block Club Chicago. “It’s a little bit unique, kinda quirky,” she told the reporter while looking over a ceramic “soon-to-be exact model of 3008 West George, a Chicago-style three-flat in Logan Square. ‘Yeah, it’s a little weird,’ said Phil Thompson, Lauffenburger’s husband who sells thousands of his drawings of Chicago-style homes—from the city’s iconic two-flats to its abundance of bungalows.” Liederman adds on Twitter, “Katie told me she’s been scheduled for four TV spots since the article came out. She’s answering emails nonstop from mini-home hopefuls.”

Checking Out The “Sistine Chapel” Of Schurz High School

Painted more than eighty years ago, the paintings on the ceiling and walls of Northwest Side Schurz High School’s library “showcase, among other things, the ‘spirit’ of Chicago,” reports the Sun-Times in their “Murals And Mosaics” series. “They’re still there, now restored. Other murals on the arched walls celebrate the history of the written word. Portraits of important figures—from Homer in ancient Greece to Ludwig Van Beethoven to Michelangelo, who painted the ceiling of the actual Sistine Chapel in the 1500s—dot the walls. In 2020, the artwork underwent a ‘touch-up,’ school officials say, to restore parts damaged by moisture or age—helping to ensure that the paintings remain in good shape for future generations of students.”

In the landmark Jackson Park Highlands corridor, a group of neighbors have bought a residential and commercial building out of receivership, reports WGN-TV. “Priced at $600,000, twenty-seven neighbors pooled their money, raising more than $280,000 to purchase the residential and commercial building… Michael Kelley moved to The Highlands a little more than three years ago. After learning the building on 71st Street and Bennett Avenue was in receivership, he saw an opportunity. ‘I followed the court case on it… Put the offer in and got the offer accepted. And then turned around to the neighbors and said, ‘Okay you guys asked for it. Let’s do it.'”

Con Todo All In

Claudia and High Road Spirits are partnering to bring a cocktail and dining event that highlights the “creative spirit of Japan” on Wednesday, January 26, paired with Chef Trevor Teich’s “innovative and whimsical cuisine.” The five-course dinner will feature cocktails designed by Stevan Miller, and pours of spirits from Akashi, Mars and Tsutsumi Distilleries. Seatings are available from 5:30pm-9:15pm. Tickets are $200 per person and available via Tock here.

A History Of Fifty Years Of The Film Center

Kathleen Sachs supplies the Reader with a sturdy, 3,000-word-plus survey of the first half-century of the Film Center at the School of the Art Institute.

Abortion And The Jane Collective Spotlighted At Sundance

Nearly fifty years ago, “if you lived in Chicago and needed help, you could call a number and talk with a woman who would offer a safer alternative. Members of the collective provided counseling and arranged the procedures, which they eventually administered—11,000 all told during that period,” reports Nicole Sperling at the New York Times. “But then in 1972, [seven] members of the group were arrested, each charged with 11 counts of abortion or conspiracy to commit an abortion with a possible 10-year sentence for each charge. Roe v. Wade, the Supreme Court decision issued in 1973, saved them all.” Members “of the collective are sharing their stories in a pair of movies at the Sundance Film Festival… the HBO documentary ‘The Janes’; and a fictionalized account titled ‘Call Jane,’ starring Elizabeth Banks and Sigourney Weaver, [which is] looking for distribution. The movies are debuting at a particularly crucial time for abortion rights…”

The Chicago Film XLerator, a content lab established to discover BIPOC talent and increase creative pipelines in the entertainment industry, has named its third-cycle winner, Kimberly Michelle Vaughn, and her project “Hindsight.” Vaughn will receive a $50,000 prize value toward her project and the opportunity to partner with executives to help produce and streamline the film. Funding partners include Chicago Filmmakers, BTEC, Camera Ambassador and Periscope Post and Audio. More here.

The St. Charles Public Library is closed to in-person visits after an attack on the library’s mask policy, reports WLS-7. “Officials at the west suburban library said they stopped letting people come inside the newly renovated facility after an incident earlier this week. The library’s director, Edith Craig, said police were called after a group of about thirty-five to forty adults and children stormed inside the building and refused to wear masks. After the incident is when the threats to library staff members over the library’s mask policy began.”

“Today is my last day at the Chicago Tribune,” tweets journalist Bill Ruthhart. “It has been the thrill and responsibility of a lifetime to represent millions of Chicagoans as their eyes and ears, questioning their elected officials and working on their behalf to hold government and its leaders accountable. Thank you the thousands of voters, readers, workers, campaign staffers, public servants and, yes, politicians for putting their trust in me to tell their stories over these last 11 years. Meeting new people and understanding their circumstances has been a joy of the job for me. I am humbled by, and remain in awe of, the scores of talented reporters, photographers, editors, copy editors and designers I have had the privilege of calling colleagues at the Tribune. There are far too many to name here, but I am eager to keep following their fantastic work. With local news and democracy under attack, the work of a free press is critical to the future of our country and our ability to understand each other. I look forward to continuing this mission by working with the next generation of journalists at The New York Times.”

South Side “Jazzologist” Ezell Cooper Was 89

“Ezell Cooper had a sign outside one of his record stores proclaiming ‘IF IT’S NOT AT COOP’S… IT’S NOT OUT!'” reports Maureen O’Donnell at the Sun-Times. “He offered all kinds of records at Coop’s, but Mr. Cooper’s specialty earned him a nickname: ‘The Jazzologist’…  Long before people routinely found music via Spotify and Google, ‘People would come from all over town’ to his stores to find the music they loved, his son said. ‘They’d go, “Doo-doo, doo-doo, doo-doo doo,” and he’d say, “Oh, that’s Miles Davis’ ‘Kind of Blue.’” People waiting for a bus would come inside and get lost in the bins.'”

Cindy Williams in “Me, Myself & Shirley,” scheduled for April 1-3 at the Studebaker Theater, will now be produced at a later date. More here.

New York Governor Kathy Hochul has “proposed budgeting $200 million for the New York City Musical and Theatrical Production Tax Credit, which provides up to $3 million per show to help defray production costs,” reports Michael Paulson at the New York Times. “Under the program, shows can receive tax credits to cover up to 25 percent of many production expenditures, including labor. As a condition of the credit, shows must have a state-approved diversity and arts job training program, and take steps to make their productions accessible to low-income New Yorkers.”