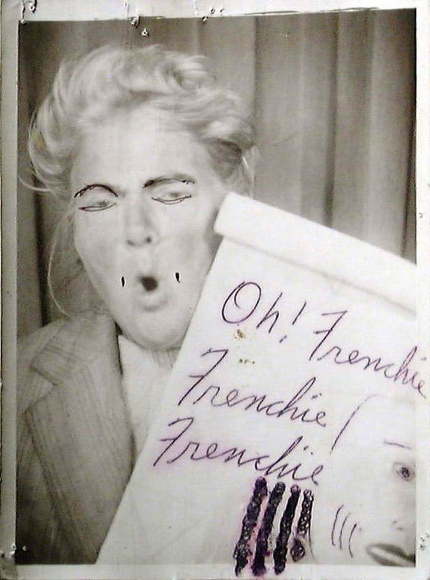 Lee Godie joins the New York Times’ “Overlooked” series of obituaries that ought to have been published at the time of the subject’s passing. It’s a vivid telling: “Because Godie was intensely private and a fabulist regarding her own life, it can be difficult to decipher truth from self-invention. She claimed to have once worked as a telephone operator, although her real ambition was to be a nightclub singer. In 1933, she married George Hathaway, a steamfitter with whom she had three children; a son died of pneumonia at eighteen months, and a daughter died of diphtheria at age seven…Godie married again in 1948 and moved to Tacoma, under the impression that her new husband, Austin Benson, would champion her singing career. Instead, she found herself marooned on his chicken farm, pregnant yet again. She ran away shortly after, abandoning her family for good… ‘She lived in a fantasy world,’ Marianne Burt, one of her student customers, said… ‘In her mind she was a world-famous artist. And everything was about France.’ … It’s unclear when Godie began painting or what inspired her to sell her art in public. She liked to claim that a red bird had told her to pick up a brush… She occasionally included cheap brooches or live carnations as bonuses to sweeten a sale. She also sometimes sewed her photo-booth portraits to a canvas as a kind of advertisement for herself.” (Godie’s work is at Carl Hammer Gallery.)

“Photographer Steve Schapiro captured buoyant, carefree pictures of a dancing James Baldwin, Robert F. Kennedy engulfed by adoring crowds and a bike-riding Muhammad Ali surrounded by joyful young cyclists,” reports Maureen O’Donnell at the Sun-Times. “But one of the most powerful photos the renowned Chicago photographer created is a still life, showing no people but capturing a palpable sense of loss. It’s of the Rev. Martin Luther King Jr.’s Memphis motel room after the civil rights icon was assassinated… His range was vast. He shot some of the most enduring images of the past century not only of civil rights giants but also of prominent figures and moments in music, movies and art… His self-described fly-on-the-wall approach and a gentle persona helped relax his subjects. Their trust allowed him to capture stunningly candid images of King, John Lewis, Ali, David Bowie, Barbra Streisand, jazz greats Bill Evans and Sonny Rollins, writers Samuel Beckett, Truman Capote and Arthur Miller and artists Salvador Dali, David Hockney and René Magritte.”

“The Chicago Transit Authority’s largest reconstruction project in the agency’s history is set to continue in February with the demolition of aging tracks north of the Belmont Red Line station,” reports the Sun-Times. “The project, which is expected to be completed in 2025, involves demolishing and rebuilding the Red and Purple Line tracks between the Belmont station and West Cornelia Avenue. Besides being a century old, the tracks curve, which slows down trains, the CTA said.”

Juggling Concerns About A 606 For The West Side

New use for the Altenheim Line? A two-mile stretch of a CSX rail line cuts through East Garfield Park and North Lawndale, writes David Roeder at the Sun-Times. (It’s 110 feet wide versus the forty-foot width of most of The 606.) “Residents and city planners are considering whether making the Altenheim Line an elevated greenway can give things a helpful push. Many believe that providing open space and recreation would spur development nearby, such as along Roosevelt Road. What residents don’t want is for the trail to become a leading edge for gentrification. The 606, for all its virtues, turned out that way, with demand for housing close to it pushing up prices sharply. It was great for property owners wanting to sell, not so good for the sake of diversity.”

Crain’s Cry To Restore “Mojo” To The Loop

“Chicago’s traditional downtown, stretching from the Chicago River east to Michigan Avenue, is key to its allure,” writes Joe Cahill at Crain’s. “That’s where you’ll find the soaring towers that make Chicago an architectural marvel, astonish first-time visitors and embody the city’s vitality… Downtown also has the lakefront, a breathtaking vista few cities can match.” These images “come to mind when people think of Chicago. What doesn’t come to mind are deserted streets and half-empty office buildings… It’s time to stop the slump before it becomes a slide. Chicago can’t thrive without a healthy, growing downtown. To reinvigorate the area, Loop landlords need to figure out how to compete more effectively with places like Fulton Market.” Cahill continues, “those competitors also offer a model. The lesson of Fulton Market and the Old Post Office is that neighborhoods and buildings can be reinvented to meet the changing preferences of the marketplace.”

“Lee Plaza, a National Register of Historic Places-listed art deco landmark in northwest Detroit, will be resuscitated courtesy of $7 million in federal COVID relief funds after sitting vacant for twenty-five years,” reports the Architect’s Newspaper. “The estimated $59 million transformation of the iconic-but-blighted Lee Plaza into a 117-unit affordable senior housing facility is the first development or construction project in Detroit to be financed in part by money received through the Biden Administration’s American Rescue Plan.”

The Trib’s Louisa Chu talks to Bo Fowler of Owen & Engine: “When she operated her eclectic bunch of restaurants before the pandemic—Fat Willy’s Rib Shack, inspired by a trip to North Carolina; Owen & Engine, an attempt to re-create the dim intimacy of British pubs; and Bixi Beer, a brewery whose pan-Asian menu nods to her Korean roots—she was like a bulldozer, she said: unconsciously plowing forward because it was all she knew to do. ‘I was almost subhuman in the way I was working… Being in pain was part of my life.'” Fowler talks about the industry’s need for downtime. “That means work weeks closer to fifty hours. It means not assuming her staff will work back-to-back brunch and dinner shifts… It means guaranteeing consecutive days off for everyone; that is why Bixi will be closed Mondays and Tuesdays and Owen & Engine on Wednesdays and Thursdays. ‘Things have to change, and I have to drive that change.'”

Picante Taqueria on Division at Damen is closing, but its owner promises a breakfast spot, reports Block Club. “Staffing issues made worse by the pandemic led owner Felipe Caro to close Picante, but he’s ready to move on. The new restaurant will feature ‘bagels with a Latin twist,’ breakfast tacos and more.”

The National Restaurant Association is asking Congress to replenish the Restaurant Revitalization Fund, reports CNBC. “Last year, lawmakers created the $28.6 billion fund to aid bars and restaurants struggling in the wake of the pandemic. The grants were designed to make up for a restaurant’s full pandemic losses of up to $5 million for a single location or $10 million for a business with fewer than twenty locations… Since the fund was depleted, restaurants have been pushing for Congress to replenish it. Several lawmakers have introduced legislation to do so, but the bills haven’t gained traction, and the Biden administration hasn’t appeared interested in supporting the measures.”

Lee Enterprises addresses its investors: “In November 2021, Alden Global Capital made a hostile bid to buy Lee… an offer that grossly undervalues Lee and represents a 33% discount to our closing stock price as of January 21. We believe Alden remains set on buying Lee at a deeply discounted price and taking Lee’s upside away from you and the rest of our shareholders. To advance its inadequate, hostile bid, Alden attempted to nominate three hand-selected candidates to replace the members of the Board’s Executive Committee, which includes our Chairman, our CEO and our Lead Independent Director. We do not believe Alden properly nominated its candidates, an issue that is pending before a court, but the critical point is this: Lee’s shareholders should want our strong Board leadership to remain in place to ensure any proposal from Alden (or others) is reviewed objectively with an eye on determining what is in the best interest of all our shareholders.”

Congo Square Theatre Company has rescheduled two of its signature programs, the Festival on the Square and Vision Benefit, to take place on Sunday, June 19, commemorating the Juneteenth holiday. Both events had been scheduled for February 5. “We are constantly considering how to best keep our audiences and community safe in returning to space with Congo Square,” the company’s artistic director Ericka Ratcliff says in a release. “The bright side of moving our Festival on the Square and Vision Benefit to Juneteenth is that it fulfills a long-time goal for the company to celebrate this meaningful holiday through our artistry. Now we will have that.” Congo Square website here.

Chicago Children’s Theatre has postponed its presentation of Manual Cinema’s “Leonardo! A Wonderful Show About a Terrible Monster” to fall 2022. “We look forward to sharing the production with you when it can be enjoyed safely and to its fullest,” the company told subscribers and ticketholders. More here.

Hell In A Handbag Revives The Drag Seed

Hell in a Handbag Productions continues its twentieth-anniversary season with a revival of its popular comedy “The Drag Seed,” an unauthorized parody of the 1956 psychological horror-thriller “The Bad Seed,” written by artistic director David Cerda and directed by Cheryl Snodgrass. Following the Chicago run, the revival will play a limited engagement later in the spring at the La MaMa Experimental Theatre Club in New York City, featuring the full Chicago cast, which features ensemble members David Cerda, Sydney Genco, Ed Jones, Elizabeth Lesinski, Tyler Anthony Smith and Danne W. Taylor with Kelly Anchors and Patrick O’Keefe. “The Drag Seed” plays February 24–March 20 at The Chopin downstairs theater at 1543 West Division. Tickets are here.

Sex-positive talkshow “Wild & Sublime” returns after two years, live at the Hungry Brain, Saturday, February 12. (“Wild & Sublime,” also a podcast, was originally known as “Super Tasty.”) “I realized I absolutely had to get back to doing a live show, even though the podcast continues to be a fantastic way of getting ‘Wild & Sublime’ out to the world. With the live show you really get the sense of community: people wanting to connect and have authentic conversations about sexuality without the shame so many of us have felt,” said Karen Yates, the producer and host, who is also an intimacy coach and sex educator. “It can be really freeing.” More here.