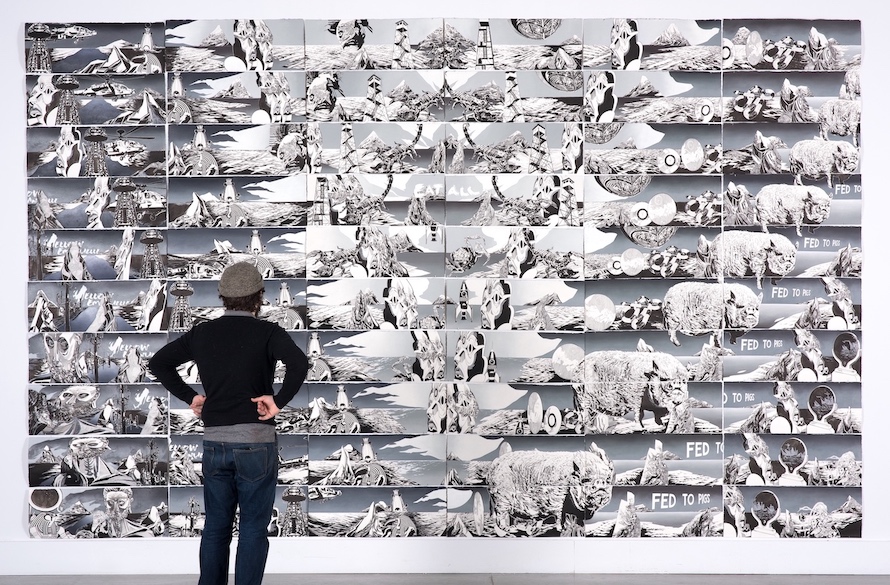 The School of the Art Institute of Chicago presents a new season of the Visiting Artists Program, a public forum that features influential practitioners and thinkers, established via an endowed fund by Flora Mayer Witkowsky in 1951. The Visiting Artists Program has featured over a thousand international artists, designers and scholars representing more than seventy countries through a mix of lectures, conversations and readings. Cameron Rowland in Conversation with Richard Birkett, February 9; Trenton Doyle Hancock, February 22; Bani Abidi, March 1; Barak adé Soleil, March 31; Ikko Yokoyama, April 5; and Fred Moten, April 12. All events are free, virtual, open to the public, and feature an audience Q&A. Registration is not required. Details on presentations here.

Spudnik Press Cooperative has introduced its seventeenth studio fellowship recipients, the group announces: golden collier, Clara Fischer, Frannie Miller, Alexander Tsanov, Logan Woodbury and Xingyi Zhao. “Eight months of free and unlimited studio access is the foundation benefit of the Spudnik Press Fellowship Program. These artists will also receive professional, artistic, and technical support catered to the needs of printmakers. Through working in our shared studio and monitoring weekly Open Studio sessions, fellows engage with our community of printmakers and benefit from ongoing support and feedback from staff and peers. Established in 2013, this program has supported sixty-six artists with unfettered studio access to support the creation of both traditional and experimental print-based artwork, as well as other resources and opportunities.” More here.

“The iconic Little Village arch that welcomes visitors to the bustling 26th Street shopping district and acts as an important symbol for Chicago’s Mexican immigrant community stands on the cusp of landmark status following a vote by aldermen,” reports John Byrne at the Trib. “The City Council Zoning Committee approved the landmark designation, setting it for approval by the full council.”

“Mars Wrigley is closing a nearly century-old chocolate plant on Chicago’s West Side once hailed as the most beautiful candy factory in America,” reports the Tribune. “Built in a Spanish-style architecture in 1928, the sprawling plant in the Galewood neighborhood bordering Oak Park employs about 280 workers and will be phased out over the next two years.” Channel 2 News: “M&M’s, Snickers, Milky Way and 3 Musketeers bars are among the products made at the plant… ‘The company remains committed to the city of Chicago and intends to partner with the surrounding community on a future vision for the site,’ a company spokesperson said… ‘As we continuously evaluate our footprint across North America, our Associates were informed today of the decision to move the majority of operations to other facilities in the U.S. over the next two years.'”

“I remember my first trip to Moody’s Pub after a performance. Ravenously hungry, I ordered a burger. And to drink? A beer,” writes Chicago’s Michael Shannon of Chicago bars at Chicago magazine. “Soon enough I found myself at the L&L Tavern on a regular basis. That’s where everyone went after their shows in Lake View, where there were so many theaters. It was a dive bar full of geniuses and eccentrics like… at New York’s White Horse Tavern in its heyday with Dylan Thomas slurring his eloquent speech. And the jukebox—the first time I heard Iggy Pop sing ‘Down on the Street’ was off the L&L jukebox. Sometimes I would climb up the side of the building it was in… Thrilling stuff.”

“Annunziata Scarano Palese, better known by her American name Nancy, which her husband Rocco used for the family-owned restaurant where he invented stuffed pizza in the early 1970s,” was 87, reports Eater Chicago. “Several pizzerias (notably Giordano’s) claim to have invented stuffed pizza, a form of deep dish in which a thin layer of dough covers a filling of melted cheese. But Giordano’s didn’t open until 1974—several years after Rocco Palese began giving away slices of his new creation in the street outside Guy’s Pizza, his first pizzeria on Armitage Avenue in Hermosa. He was inspired by his mother’s recipe for scarciedda, an Italian double-crusted Easter pie stuffed with meat and cheese.” The Sun-Times: “Her husband and restaurant co-founder Rocco Palese created his own version of a hearty ‘stuffed’ pizza (not deep dish) that would become the core of Nancy’s Pizza restaurants.”

“Growing up on the South Side, [Jackie] Jackson’s first job was flipping burgers, serving customers and singing jingles at a Burger King. She dreamt of one day owning her own fast-food joint,” reports the Sun-Times. “Now, a city grant will make her long-time dream a reality. Jackson will bring a Fatburger — the first in the state — to Chatham this year… Jackson’s is among thirty-one small businesses on the South and West sides that were recently awarded grants from the city’s Neighborhood Opportunity Fund. The fund aims to revitalize South and West side business corridors by funding construction and rehabilitation projects.”

“Gepperth’s Meat Market in Lincoln Park is reopening after being closed all January, but the shop continues to struggle with rising meat prices and staffing shortages,” reports Block Club Chicago. “Gepperth’s, 1964 North Halsted, temporarily closes at the start of each year to give staff time off and the owners a chance to fix up the shop. The 111-year-old meat market is normally open by January 15, but this year it won’t reopen until February 1… Owner Vincent Colombet: ‘Basically, nothing is going the way we want right now.'”

Ahead of her Martin Luther King Day speech, a small number of Union League Club members said Nikole Hannah-Jones “was a ‘discredited activist’ whose work was not in line with King’s teachings,” Mitch Dudek reports at the Sun-Times. “So, she quoted King as if the words were her own—only later to jolt her audience with the revelation of their origin.” She talked about the speech later in a virtual address to Northwestern faculty: “What I took to be the challenge when people said I was a discredited activist who defiled the legacy of Dr. King was that most people have never read Dr. King’s words. Most people have no idea who he was, and so I decided I would spend the first half of my speech just reading his speeches like they were mine, and I can probably never do it again because it got a lot more press attention than I thought… the same politicians that are trotting out a really homogenized version of Dr. King are opposing the policies that he fought for, so they would have you believe that he was not radical. He was a radical actor.”

The wave of banishment of books is rising: “A national campaign to ban books with themes dealing with race and gender scored a victory Thursday when the Wentzville School Board voted 4-3 to pull ‘The Bluest Eye’ by Toni Morrison from the district’s high school libraries,” reports the St. Louis Post-Dispatch. “Across the country, the push to restrict teaching about race and gender equity includes library books that conservative parents and lawmakers say are divisive and serve to indoctrinate students with a leftist ideology.”

“Public radio,” says Politico media writer Jack Shafer, “makes my skin itch.” The Chicago Public Media deal isn’t being seen in the right light, he writes. “The significant thing about the WBEZ deal is that it could set an example to other broke dailies that think partnering with a public media property will help them find a safe financial place in the nonprofit harbor. How might shifting newspapers from for-profit to nonprofit change our media diet? … Ultimately, not every daily newspaper can be saved, and some might not be worth saving… For-profit newspapers have traditionally been as much as entertainment vehicles as news vehicles. As the Chicago Sun-Times switch to nonprofit arrives, it’s hard to imagine that its owners will want to use tax-exempt donations to fund newspaper comics, astrology columns, sports coverage, advice columns, crosswords and puzzles, recipes and other divertissements with tax-exempt donations. It’s easy to imagine Chicago Public Media bailing out the Sun-Times but eventually abolishing much of what makes it recognizable as a big city daily.”

Do Division And West Fest Hope To Return

“Two popular street festivals are returning to West Town and Wicker Park this summer after being canceled two years in a row,” reports Block Club Chicago. “Do Division Fest will run June 3-5 on Division between Damen and Leavitt and West Fest Chicago July 8-10 on Chicago between Damen and Wood.

Epiphany Center for the Arts has announced its 2022 Acoustic Music Series lineup, featuring live music that showcases the acoustics of the landmark venue’s Epiphany Hall and The Sanctuary. David Chase, Epiphany’s co-founder says in a release, “Whether you’re at an intimate show in The Sanctuary or a 400-person listening concert in the more expansive Epiphany Hall, the stunning acoustics in both spaces make for the ideal listening experience.” The roster begins with Ian Maksin, January 29, 8pm; and Fifth House Ensemble, January 30, 3pm. Tickets and more here.

“Hegewisch, which lies in the southeastern corner of the city, alongside Wolf Lake and the Indiana state line, is Chicago’s most remote neighborhood,” reports Chicago magazine. “Although when I walked its streets… it felt less like a neighborhood than a self-contained small town on the prairie, miles from the next town over… ‘It’s your neighborhood! You’ve got to help out. It’s more than a neighborhood. It’s a community. You know your neighbors. You know da people.'”

“A bill introduced in Springfield last week that would limit the key mind-altering ingredient found in legal pot products has drawn swift pushback from both cannabis advocates and an influential trade group,” reports the Sun-Times.