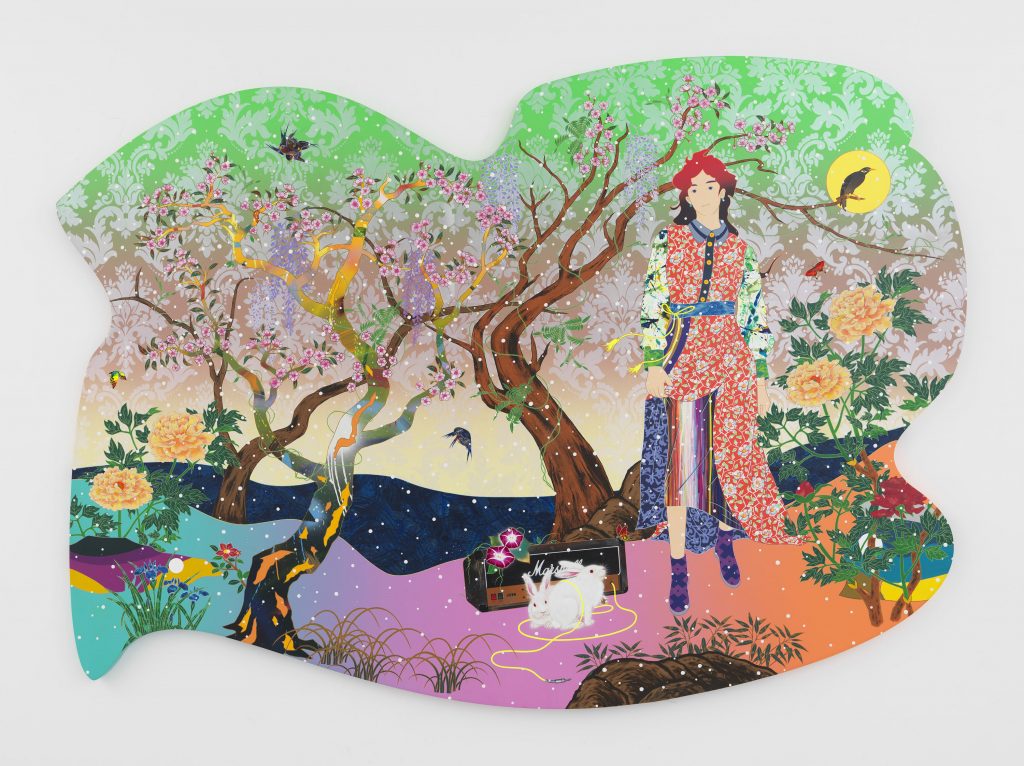 “For You Blue Day Tripper,” from Tomokazu Matsuyama’s “The Best Part About Us” at Kavi Gupta

Theaster Gates has revealed his design for the twenty-first Serpentine Pavilion, reports ArchDaily. “Curated for the first time by a non-architect, the 2022 edition, titled ‘Black Chapel,’ ‘will pay homage to British craft and manufacturing traditions.'” The pavilion will open June 10 in Kensington Gardens. “Made of wood, ‘Black Chapel’ alludes to the performative and meditative qualities of a small chapel… Designed to minimize its carbon footprint and environmental impact, [it] will have a predominant lightweight and fully demountable timber structure… The structure will have [a] single source of light from an oculus in order to create a sanctuary-like environment.” A bell at the entrance, from the demolished St. Laurence Church on the South Side, will be used “to call, signal and announce performances and activations.” From The Art Newspaper: “The building is environmentally friendly ‘with a focus on sustainably sourced materials and the reusability of the structure after its time installed at Serpentine.'”

Kavi Gupta Presents Tomokazu Matsuyama’s “The Best Part About Us”

“The Best Part About Us,” a solo exhibition of new paintings and sculptures by internationally acclaimed, Japanese-born, New York-based artist Tomokazu Matsuyama runs at Kavi Gupta, February 5-March 26. “‘The Best Part About Us’ comes on the heels of the artist’s landmark solo exhibitions at two of China’s largest and most influential private museums, Long Museum Shanghai and Long Museum Chongqing.” From the release: “The visual language Matsuyama deploys in the works in ‘The Best Part About Us’ reflects the experiences of today’s nomadic diaspora—a global, intercultural community of wandering people who seek to understand their place in a world full of contrasting visual and cultural dialects. Amalgamated from his vast mental and physical archive of iconographical material, Matsuyama’s painted worlds vivify his lived experience. His fresh approach to the language of figuration creates dual references to both our contemporary realities and our multiplicitous pasts, combining allusions to fashion models torn from the pages of glossy magazines; flora and fauna borrowed from Edo-period folding screens; open-source wallpaper patterns from the Internet; fragmented snippets of pop culture and celebrity life; frozen movements captured from the garments of centuries-old Buddhist sculptures; compositional strategies of the European Renaissance masters; aesthetic cues from Modernist art history such as shaped canvases and Abstract Expressionist techniques; and of course, those innumerable bits of branded trash ubiquitous on the streets of every city in the Western world.” More here.

“Truth and Beauty in the Hard Places” is the culmination of yearlong residencies by creatives Tara Betts and Renaldo Hudson, inaugural “Poet/Artist for the People” practitioners-in-residence fellows at the Center for the Study of Race, Politics, and Culture and the Pozen Center Human Rights Lab at the University of Chicago. The works featured “excavate the brokenness and resilience evident in our shared humanity,” relays the press release. “For Tara Betts, ‘Poetry has always been the wellspring of hope, where I could hew words into affirmation, analysis, metaphor, and storytelling.’ Betts’ poems explore what it means to live deeply, especially during a pandemic. For Renaldo Hudson, art serves as a vehicle for truth-telling. He began to paint while he was on Illinois’ death row to ‘escape’ his harsh surroundings and the death sentence that had been imposed on him by the state. His paintings are illustrations of the hard truths that he believes the world needs to see. ‘Beauty can come from ashes,’ Hudson says, and his paintings reflect his unique lived experiences as a once condemned man who found his way to freedom.” “Truth and Beauty in the Hard Places” is on display in Café Logan, in the Reva and David Logan Center for the Arts through April 1. More here.

D. R. Horton, the nation’s biggest builder, had bracing commentary on its first-quarter earnings call. “The private builders and even some of the smaller public builders are going to have a very difficult time delivering houses,” said president and CEO David Auld. “It’s probably harder to complete and finish a house today as it’s been in my career in home building. And as these private guys who don’t have our scale, who don’t have our ability to drive result, their houses are [sitting] and that’s going to cut off their access to the next house they start. Anecdotally, we are talking to the builders end markets, they’re just tired… Sixty percent of the homes being built out, they’re being built by nonpublic. And I think all of this cycle, you’re going to see that group’s ability to start houses continue to deteriorate and that is going to get picked up by the public. Even if the overall housing market, new home housing market declines, I think the top-tier developers are going to pick up market share and they’re going to continue to grow.”

Software developer Anthony Moser has mapped city plowing and showed his sources and results on Wednesday: “I have combined some publicly available data sources from the city of Chicago, and from what I can tell roughly half (309 / 653) of the schools in CPS NEVER HAD THEIR STREET PLOWED today.” Thursday: “As of 9 this morning, 131 schools that were *not plowed at all yesterday* STILL HAD NOT BEEN PLOWED.”

Going Deep On The Peoria Lock And Dams

At WCBU, Hannah Alani goes into great detail on the history and function of the 1930s-era Peoria Lock and Dams, which are included in $829 million that has been allocated for waterway improvements. “Just south of [Peoria, barges] stop at a lock and dam located on the Tazewell County side of the river, in Creve Coeur. Here, workers will lock the barge inside a 600-foot chamber and level the water underneath, so that the barge can safely pass through the dam. This process will be repeated several times before the Illinois River merges with the Mississippi, north of St. Louis. These locks and dams were built during the Great Depression. Thanks to the federal infrastructure bill, $829 million has been appropriated for repair work along the Illinois River. Two locks along the Mississippi River are getting even more investments. Lock 22 north of Quincy will receive a brand-new water wildlife restoration project. And north of St. Louis, the 600-foot chamber at Lock 25 will be expanded to 1200 feet. This will enable two-way barge traffic, while increasing the number of barges that can be locked through at a time. U.S. Representative Cheri Bustos (D-IL) said this is the largest investment in the Upper Mississippi waterways in modern history. ‘When the lock and dam system was created, it was… created for steamboats to get goods to market… And then over time, we have these massive barges. … We now have 1200-foot barges.'”

“Corporate innovation centers” are coming to Chicago, reports Crain’s. “About a dozen companies, including Bosch, Tyson Foods, DHL, Accenture, Caterpillar, KPMG, the Department of Defense and Kellogg, have opened innovation hubs in Chicago since 2016.”

“Nine truckloads of stuff have been carted out of Ald. Ray Lopez’s ward, which covers parts of Back of the Yards, Gage Park and Brighton Park,” reports Block Club Chicago.

“Sold for $2.58 million, the house in the fly-in subdivision of Brookeridge Estates has a hangar the size of a fifteen-car garage, as well as a swimmable pond,” reports Crain’s.

Black Restaurant Week Is Back

Chicago Black Restaurant Week begins Sunday and runs through February 20, reports Block Club Chicago. The website is here. A list of restaurants is at Instagram here.

“In the 1960s, Shirley Haas wrote a weekly children’s book column that ran in the Daily News’ Panorama section under her maiden name Shirley Lowry,” reports Thomas Frisbie at the Sun-Times. After her husband’s passing, she “worked in former Mayor Richard J. Daley’s press office, for the City Office for Senior Citizens as director of community education, as the Chicago Public Library’s chief of public information and as a public relations staffer for the Chicago Health Department. She also was an editor for Rand McNally when the company had a textbook division… In 1987, Ms. Haas co-founded the Fiery Clock Face [bookstore], which was open [in Andersonville] until 1995. The shop got its name from a traditional Celtic fiddle tune that was a family favorite.”

Leveraging its history and ours, the Trib’s launching a weekly look at local history in words and pictures. “The Chicago Tribune’s photo files, newspaper clippings, recipe cards, book collection and other accumulated ephemera have been for the exclusive use of its staff during the paper’s almost 175 years in operation.” Online users can now subscribe to a free “deep dive into the Tribune’s stacks” with the Vintage Chicago Tribune newsletter. (Here’s the first edition.)

Spring And Summer Festivals Barreling Back

The Chicago Blues Festival, Chicago Jazz Festival, World Music Festival Chicago, Taste of Chicago, Farmers Markets and Chicago Air and Water Show are scheduled to return. Following two years of interruptions, many events have been officially scheduled, reports the Trib (via Yahoo). “Chicago’s spring and summertime programming is cherished by our residents and bolsters our tourism, hospitality and creative industries,” Mayor Lightfoot said in a DCASE announcement. “I am thrilled that we can bring back our iconic music and food festivals, as well as hundreds of other events. This will help to bring a sense of normalcy back to our city and revitalize the local economies of our neighborhoods.” But Taste of Chicago is not returning to its pre-pandemic scale, instead going “the route of pop-ups and food trucks, similar to last summer, as a way of showcasing Chicago’s diverse restaurant community and including its neighborhoods. The pop-ups will include a stop in Grant Park, including bands and live music.”

Artemisia Theatre has hired Kelcey Anyá as the company’s first managing director, the group relays in a release, “marking a key moment of growth and renewed commitment to elevating women’s voices.” Julie Proudfoot, founder and artistic director says, “I’m thrilled to welcome Kelcey to Artemisia’s leadership team. Kelcey’s fierce feminist voice, her incredible creative energy and her commitment to theater that centers all women make her a perfect champion for Artemisia.” Kelcey Anyá is “a multi-disciplinary performing artist originally from the bayous of South Louisiana. She began her performance career at the age of two as a dancer, fell in love with all things performance, and her motto became, ‘As long as I can touch the stage, I’m happy.'” Artemisia’s site is here.