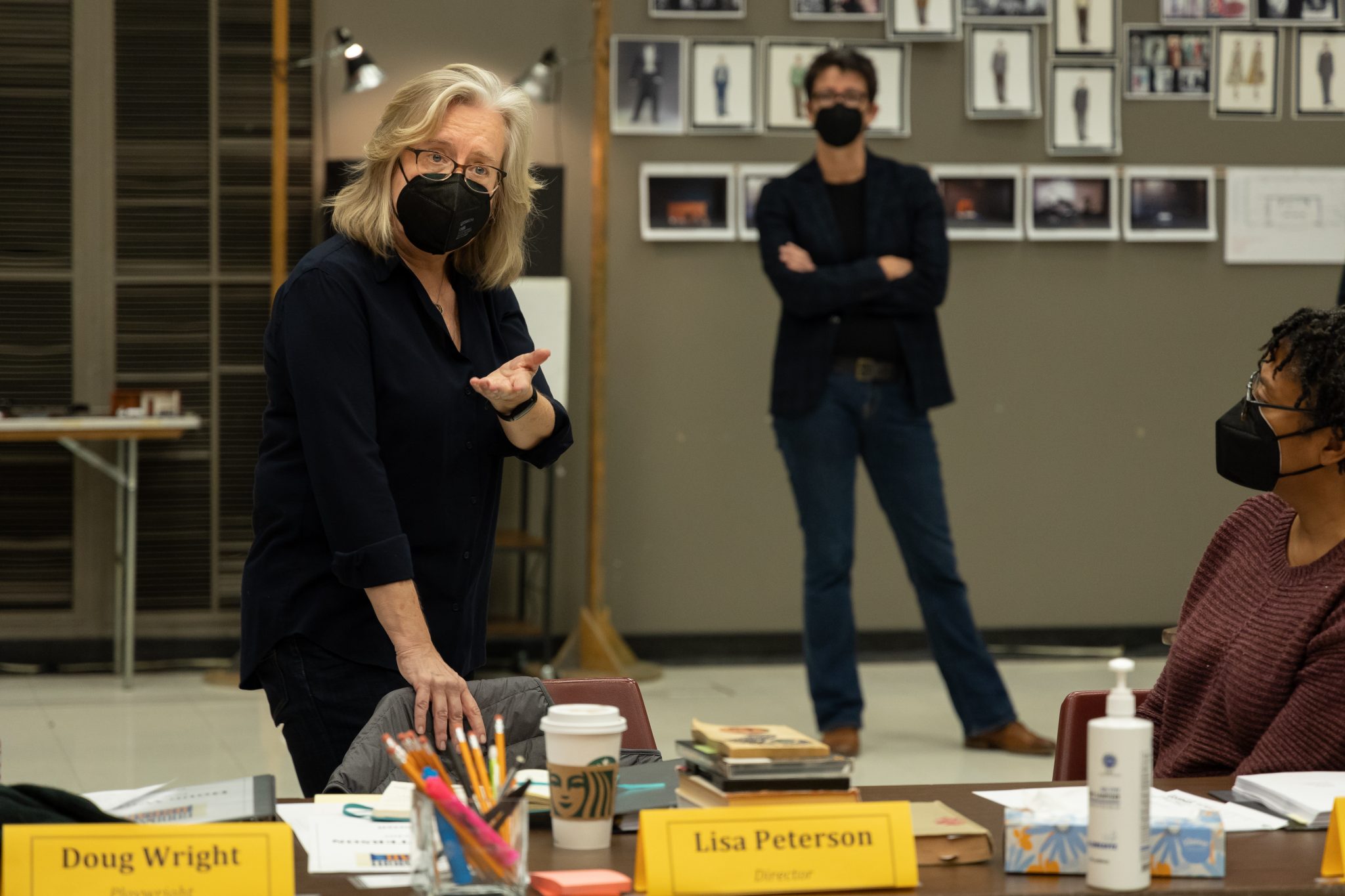 Further retail development in the Gold Coast at 939 North Rush, reports YIMBY Chicago. “The Chicago Plan Commission has approved a new retail building at 939 North Rush… near the intersection with East Oak Street, one of the premier retail corridors in the city. The proposal would replace an existing three-story structure built in 1957 that was recently occupied by Italian fashion brand Brunello Cucinelli and has since moved next door.” Here’s a view of that block from fall 2020.

“Members of the Donnelley family, with ties to the R.R. Donnelley printing business, have sold a vast country estate in Libertyville that had been in their family since the late 1940s,” reports Dennis Rodkin at Crain’s. “The estate, called Windblown Hill, is eighty-four acres of farm and prairie land on Almond Road in Libertyville, fifty-eight miles northwest of the Loop. It sold for $3.45 million, or about 63% of the $5.5 million the family was asking.”

Admiring Murals On The El

The Sun-Times’ “Murals & Mosaics” is going underground—at least in part—surveying the murals in CTA stations around the city. “What does the El mean to you? … How about a place to consume the arts? We certainly wouldn’t raise that question when it comes to CTA buses, whose filth we’ve documented… But the train stations? Gotta say, even amid the bad smells and suspicious puddles, they have amazing artwork in terms of murals and mosaics, as the Sun-Times has reported in our ‘Murals & Mosaics’ series. Legit artists. Professional artwork. Proudly displayed.” Images here.

“Gibsons Restaurant Group is nearing a deal to open a location in the Fulton Market district, a neighborhood that has remained red-hot for commercial real estate deals throughout the pandemic,” reports Crain’s. “The Chicago restaurant operator is looking to lease about 15,000 square feet in a yet-to-be-constructed building at 917 West Fulton Market.”

Lindsey Pearlman, a formerly Chicago-based actress who studied comedy at The Second City Conservatory and appeared on “Empire” and “Chicago Justice,” has passed in Los Angeles, reports the Hollywood Reporter. She’s survived by her husband, former Stage Left artistic director and local actor Vance Smith, who posted on his Instagram: “The police found Lindsey. She’s gone. I’m broken. [I] ask you to respect the privacy of her family at this time.”

“David Seleb is retiring after almost a decade spent as executive director of the Oak Park Public Library,” reports Wednesday Journal. His last day is February 28. “The opportunity to work for the Oak Park Public Library and to finish my thirty-three-year career there has been extraordinary. I thank my board of trustees for that opportunity and for the support and encouragement they have given to me,” Seleb emailed the publication.

On The Influence Of “Maus”

“Art Spiegelman is not alone. Other comics creators are here, born in his shadow, grateful for his ambivalent leadership,” writes Amy Kurzweil at LitHub. “It’s important to understand what’s really happening when we talk about books being ‘banned’ in this country. Many have made the point that a prohibition on teaching in eighth grade classrooms is not a literal ban. It’s true, in other episodes of literary history, authorities have gone to greater lengths than the McMinn County School Board in their attempts to erase an important book’s message or punish a creator for a book’s existence… When we talk about books being banned in America, what we fear is a slow creep into ignorance. We have chosen the word ‘banned’ for political reasons, knowing the designation will inspire at least momentary action.” In Missouri, students are suing over book bans, reports Talking Points Memo: “Two students in Missouri’s Wentzville School District on Tuesday filed a lawsuit against the district over the banning of multiple books in the district’s libraries. Plaintiffs in the class action lawsuit, identified only by the initials C.K.-W. and D.L., are minors. They are represented by lawyers for the ACLU of Missouri. The lawsuit alleges that the district’s decision to remove books was based on the ‘dislike of the ideas or opinions contained in the books by policymakers, school officials, community members or a combination of those.'”

Ye (aka Kanye West) “is engaging in full-fledged harassment of his estranged wife and the media has failed to contextualize this behavior as something other than typical celebrity tabloid fodder or just West being his usual provocative self,” writes Hanna Phifer at Elle. “West has used his social media presence to target Kardashian’s current partner… Pete Davidson, referring to him as ‘Skete’ and reposting a debunked rumor.” Last Monday, West “urged his fans not to get physical with Davidson as he would ‘handle the situation myself.’… It should be noted that West is struggling with his own mental health issues, but there is no ambiguity to the ongoing harm being committed here… We’ve constructed this idea of who we think is worthy of care and affection and who isn’t. But there is no safety to be found in a person like West, who treats women like his own project that he can dispose of once he’s done with them.” At the Trib, Chris Borrelli calls the Netflix documentary “jeen-yuhs: A Kanye Trilogy” “an epic hang, illustrating the long, endless, pragmatic everyday decisions it takes to create art.”

Chicago writer Jen B. Larson is making lost sounds heard, writes Leor Galil at the Reader. “‘It sounded like so many of these bands around the world could’ve been in the same scene—but a lot of them, of course, hadn’t even heard each other,’ Larson says. “’They were creating things that really seemed to me almost coherent, as if all these women and these bands were, like, working together in some way. I was just really fascinated by that.’ … Larson’s dedication to writing about these bands led her to independent publisher Feral House, which in 2019 signed her to a book deal; ‘Hit Girls: Women of Punk in the USA, 1975-1983‘ is due in August. While researching her book, she often consulted with [Bric-a-Brac Records & Collectibles co-owner] Jen Lemasters, who shared her desire to lift up women in punk—and who especially wanted to spotlight women of color in punk… Larson pitched a story on Bell to Please Kill Me, a music and culture site that grew out of Gillian McCain and Legs McNeil’s 1996 punk oral history of the same name. On September 3, 2020, Please Kill Me published “Tina Bell’s hidden legacy: The Black woman who created the sound of grunge.” Larson closed the piece with a call to action: ‘It’s more than time to crown Tina the Queen of Grunge,’ she wrote, ‘and not as a woke PR move, but because it’s the Truth.'” More here.

“PlayMakers Laboratory has been providing theater and arts instruction to under-served Chicago kids for twenty-five years,” reports Block Club Chicago. “The pandemic hurt PlayMakers Laboratory’s finances and ability to teach in schools. The nonprofit’s board voted in January to close the organization, a move that devastated company members and alumni. Now, staff and supporters are trying to revive the arts education nonprofit. The company’s new leadership has launched an emergency fundraiser as it seeks to get back on its feet.”

“Chaz Ebert, publisher of RogerEbert.com and wife of the late film critic Roger Ebert, will receive this year’s Ruby Dee Humanitarian Award from the Black Reel Awards,” reports Rob Feder. “Citing her work as a film producer and businesswoman, Tim Gordon, Black Reel Awards founder and CEO, said: ‘Ms. Ebert’s journey has been one of quiet resiliency and achievement as she has been an ambassador for the legacy of her husband’s work and simultaneously forged a path uniquely her own.'” The Black Reel Awards will be livestreamed February 28 at 7pm; link and more here.

“Josephine ‘Jo’ Baskin Minow left her mark on the city’s cultural institutions and took pride in her years of advocacy work during her ‘lifetime love affair with Chicago,'” reports the Sun-Times. Minow was “a prominent organizer and advocate, she served on boards at the Chicago History Museum, Northwestern University, Chicago’s Center on Halsted, Ravinia Music Festival… during her ‘lifetime love affair with Chicago and Chicago history,’ according to Nell Minow, her daughter… The wife of seventy-two years of Newton Minow, who served as the chair of the FCC under John F. Kennedy and received the Presidential Medal of Freedom from Barack Obama in 2016, Ms. Baskin Minow blazed her own trail in Chicago through social and political landscapes.”

“Charles Henderson remembers the years he spent on the original Maxwell Street fondly,” reports Block Club Chicago. “Henderson would set up the vending tables first thing in the morning, meticulously organizing 8-track tapes and cassettes… Groups of musicians would play on the street around him. For most of those memories, he was with his father, Charlie Joe Henderson, nicknamed ‘the Mayor of Maxwell Street.’ Charlie Joe Henderson was well-known around the market from the ’70s and beyond as a man who not only sold music, but rented tables to vendors, settled disputes and was committed to making the market the best it could be.” (Among the family’s lasting business enterprises is the Out Of The Past Records shop on Madison.)