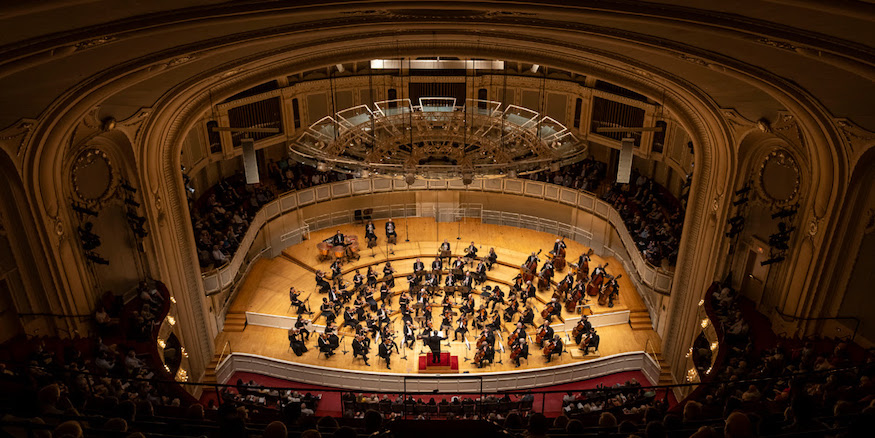 “A developer whose neighborhood investments have drawn favorable reviews from City Hall plans a $33 million investment in a commercial stretch of West Humboldt Park,” reports David Roeder at the Sun-Times. “A.J. Patton, CEO of 548 Development, said he has acquired property at 3831 West Chicago, where he plans a sixty-unit housing development and a ground-floor grocery. The project will incorporate vacant land that is city-owned. Patton said the building, using solar panels, will be the largest example of ‘passive housing’ in Chicago. The term refers to housing designed for maximum energy efficiency. His project would include triple-paned windows and increased insulation. Patton said his goal is to cut tenants’ electric bills by fifty-percent compared with other buildings and to eliminate the need for natural gas.”

Why Are Politicos Rushing To Demolish The Century And Consumers Buildings?

Lynn Becker has a few questions, under the heading “Stop the lies, stop the destruction.” “Your U.S. Senators snuck in a $52 million earmark to destroy two classic Chicago skyscrapers. Why? ‘Security.’ The feds have declared the buildings a security risk to the Dirksen Federal Courthouse. Here’s the truth: the Berghoff building is a bigger potential risk to the Dirksen, being literally only yards away. Yet it has not been demolished, and continues to operate. See that building behind the Berghoff? It’s the Century, one of two classic Chicago skyscrapers the feds are hellbent on demolishing. Notice that the Berghoff separates it from the Dirksen Federal Building by over a hundred feet. Notice also that the Century has only a blank wall facing the Dirksen. The tall building to right of the Century is the second the feds want to destroy – the Consumers Building. It is also substantially set back from the Dirksen. It does have windows facing the Dirksen, but they could be bricked up if necessary. Ah, but you say. The two buildings that feds want to destroy may be set back, but they’re still close enough to pose a security risk. Yeah, right. As opposed to the Century Building, which has NO windows facing the Dirksen, or the Consumers, which has a few, Citadel Center is ALL WINDOWS, a completely glass facade, actually closer to the Dirksen than either of the other two. In fact, the entire Federal Center is surrounded by tall buildings, some closer to its buildings than either the Century or Consumers. The ‘security’ argument for destroying two landmark-quality Chicago skyscrapers is specious. It is the work of bureaucrats too lazy to rethink a 9/11 mindset now over two decades old, and too eager to create a gaping hole on State Street—and waste $52 million of your tax dollars to do it. Write Senators Durbin and Duckworth and let them know their support for this vandalism is unacceptable.”

City Council has approved rezoning for a coffee roaster and café on Kedzie in Avondale. The shop would repurpose an existing one-story masonry structure that houses Olde Chicago Antiques, reports YIMBY Chicago. Metric Coffee is behind the plan with local design firm En-Masse Architecture.

Stephen Wilhite, Creator Of The GIF (“Jif”), Taken By COVID

Stephen Wilhite, the creator of the GIF – the Graphics Interchange Format, the looping animated image – died of COVID days after his seventy-fourth birthday. “Wilhite began his career at Compuserve, the first major commercial online service provider,” reports NBC News. “In 1987, while at Compuserve, he created the GIF in order to compress images to make them accessible for early modem speeds. Years later, it became social media’s primary method of conveying emotion and memetic communication. The GIF format has been used as a convenient way to show graphs, drawings, and simple animations.” Wilhite, perhaps the authority, said the pronunciation is “JIF.”

“Howard Brown Health is starting construction today on a $44 million clinic allowing it to expand health services in Lakeview,” reports David Roeder at the Sun-Times. The five-story, 71,000-square-foot building is expected to open next year. “Howard Brown executives said the building at 3501 North Halsted is designed to serve 23,000 patients a year compared with the 7,500 patients seen annually at its current location… The new building will include Howard Brown’s first North Side dental practice, increased room for behavioral health treatment and more services for HIV prevention and care… The site initially will accommodate a staff of about a hundred that should grow over time to 160.”

The 300-page “Movie Theaters,” “a new cemetery slab of a coffee-table book by the French photographers Yves Marchand and Romain Meffre [splay] open the crumbling corpses of cinemas that closed, often decades ago,” writes Christopher Borrelli at the Trib. “The Chicago area is a little too well-represented. There are the decaying walls and flattened seats of the Lawndale Theatre, once a Roosevelt Road fixture, before the building was demolished a decade ago—it hadn’t shown a movie in fifty years. There are five pages of the relatively sprightly Uptown Theatre on Broadway, looking just $1 billion, a robust rust-scrubbing and a full repainting away from filling its 4,381 seats.”

Sun-Times staffer Lee Bey takes a monthly berth for architecture criticism, Robert Feder reports. “Two members of the Sun-Times editorial board—Lee Bey and Rummana Hussain—have been tapped to write monthly columns for the paper’s Sunday edition, starting next month. Bey, who also is an adjunct professor at the Illinois Institute of Technology College of Architecture, will resume his role as Sun-Times architecture critic.” Sun-Times interim editor-in-chief Steve Warmbir told staffers in an email: “We’re thrilled to have Lee back writing about architecture, since there’s no one better in Chicago.” Hussain will supply “a wealth of hard-news experience and knowledge, whether it was covering the Cook County criminal court system or later editing our criminal justice coverage for the news desk.”

The Chicago Symphony Orchestra Association has established a Chicago Symphony Orchestra Fellowship Program that will launch with auditions for a first class of up to three fellows in the 2022-23 season. Applications to submit online audition materials for the program will be accepted April 1-May 27. In its first year, the fellowship program will select three musicians from populations that have traditionally been underrepresented in American symphony orchestras, including, but not limited to, those who identify as Black, Latino or Indigenous. Fellows will gain significant experience rehearsing and performing with the Chicago Symphony Orchestra, with the opportunity to work with renowned conductors and receive training and mentorship from CSO musicians to equip them to win auditions in U.S. orchestras. Fellows will play a minimum of twenty subscription weeks with the Chicago Symphony Orchestra and will have access to up to ten one-hour private lessons with a CSO musician. Additional benefits such as financial support for initial relocation expenses and auditions will also be available. Application information for the CSO Fellowship Program will be available on April 1 here.

Tickets go on sale May 4 for more than a hundred concerts at the Ravinia Festival, running from May 20-September 18. The Chicago Symphony Orchestra is in residence, and attractions will include “global music, jazz, country, and hip-hop, to indie rock, pop, family shows, chamber music and recitals, films with live scores including ‘The Lion King,’ a celebration of Mexican music and culture, reggae and American Songbook.” Artists include Stevie Nicks, Diana Ross, Common, Jackson Browne, Emerson String Quartet, Dwight Yoakam, “ABBA The Concert,” Erykah Badu, Sheryl Crow, Sting and Pitbull. Complete listing here.

Chicago Youth Symphony Orchestras hosted its 2022 Gala “Listen to the Future,” celebrating CYSO’s seventy-fifth anniversary season at the Marriott Marquis Chicago on March 12, honoring CYSO’s past, present and future. Proceeds from the evening directly support CYSO’s music education programs for dedicated young musicians from across the Chicago region. “It was wonderful to gather in person once again so that our guests could experience the energy and enthusiasm of our young musicians performing live as we listened to the future. That this return coincided with CYSO’s seventy-fifth anniversary celebration made it even more special,” gala co-chair Angela O’Banion says in a release. “I’d like to thank our current students and their families for continuing in CYSO’s rich tradition of musical excellence.”

“Street and traffic upgrades are coming to the area around the former Morton Salt warehouse while the building is converted into a music venue and mixed-use development,” reports Block Club Chicago. “City Council approved $2.54 million in tax-increment financing for infrastructure fixes surrounding the former factory, 1357 North Elston. The funds will be issued as a loan to developers R2 and Blue Star Properties, which will repay it at two percent interest over a ten-year period, or immediately if the property is sold.”

Sundays on State returns, along with the popular ACTIVATE alley event, the Chicago Loop Alliance reports. During their annual meeting March 24, “Nearly 300 key Loop stakeholders gathered during the in-person event held at Palmer House. New board members were inducted, the organization’s 2021 Annual Report was unveiled in both print and digital format, and major plans were announced for 2022.” Read more here.

In the foundation’s annual essay, MacArthur president John Palfrey reflects on the possibilities for philanthropy to imagine and construct new systems that eliminate inequities. “Our collective health, well-being, and reality are shaped by the systems and structures we created long before the pandemic. Our opportunity going forward, in philanthropy and beyond, is to reconstruct something new and better toward eliminating long-standing disparities in race, gender, disability, and anywhere else they exist. While we are in conversation with our past, we are speaking to the present, and imagining the future. An endless optimism and sense of possibility informs and guides us.” More here.