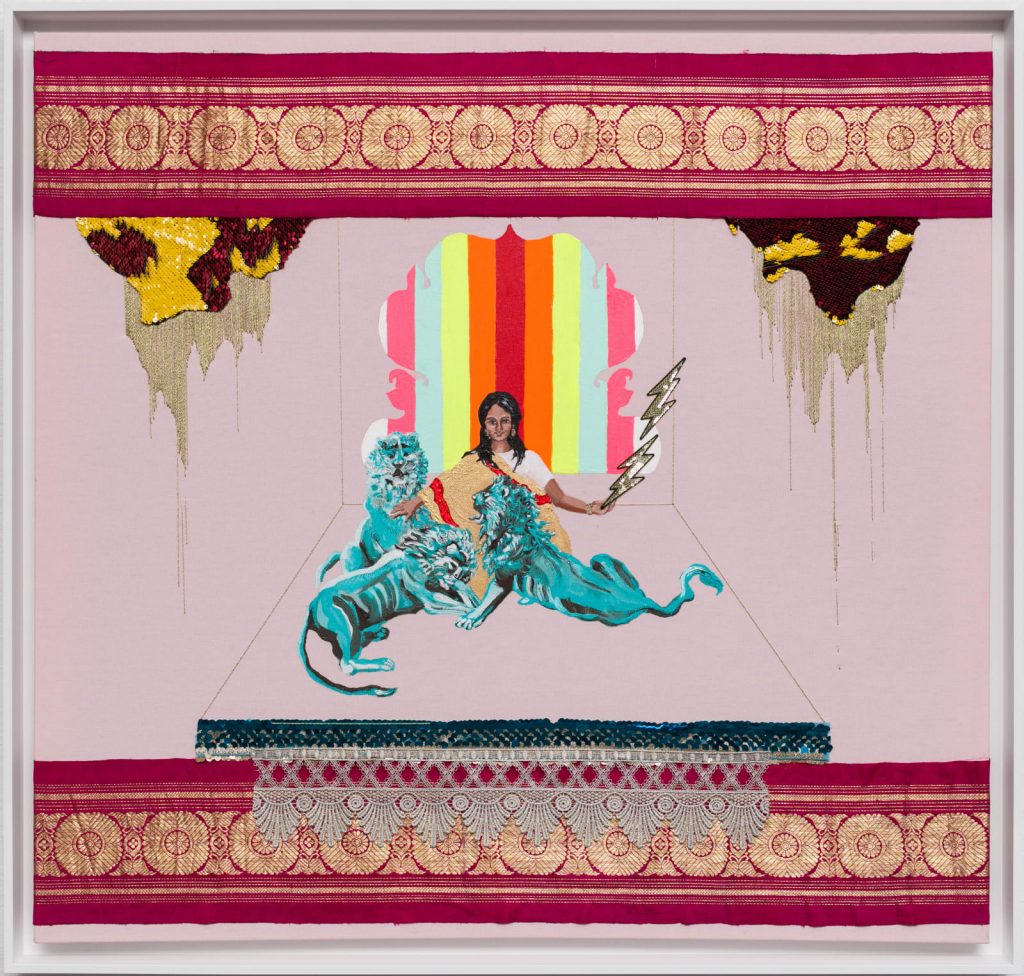 Kavi Gupta announces representation of Denver-based, Guyana-born artist Suchitra Mattai. Mattai’s highly conceptual studio practice is rooted in the telling of visual stories related to her Indo-Caribbean heritage. Her inaugural solo exhibition with Kavi Gupta will open in November. Mattai has lived in Guyana, Canada, the United States India and Europe. Her work addresses the disorientation of not really having a single home—a feeling that informs much of how Mattai thinks about identity. Found objects, as well as craft-based processes and materials, play an essential role in her practice, in part because of the potentialities that arise from materials with forgotten or erased histories. “I’m inspired by the mystery of the objects I find,” Mattai says. “When I combine multiple objects and mediums in a work, the collective aura translates into a space of new myth and new folktale. It’s no longer about history. It’s about the immediate, and how the past plays into the contemporary conversation.” Among Mattai’s most illustrative bodies of work are her vibrant, kaleidoscopic sari tapestries. The process of their creation involves traditional domestic labor techniques such as sewing, embroidery and crocheting, which Mattai learned from her grandmothers. More here.

Fourteen members of the first class of the Dorchester Industries Experimental Design Lab have been named, reports the Sun-Times. “The Design Lab, a collaboration between Theaster Gates’ Rebuild Foundation and Prada Group, aims to uplift and invest in designers of colors in fashion, architecture and the industrial arts. ‘We spent a lot of time watching how many of the fashion houses in the design world and the museum institutions have been acknowledging and celebrating the contributions of Black artists and designers and people of color…,’ said Gates, co-chair of Prada Group’s Diversity and Inclusion Advisory Council… Nearly 200 people were nominated by leaders across the creative industries… Two groups of Design Lab nominees will each spend eighteen months in the program. With support from Prada, [there will be] more than $250,000 in stipends for the designers.” Half of its members are from Chicago, reports Block Club. “Some of this is about representation, and some of this is like, ‘Oh, I didn’t realize there were so many dope-ass Black people doing dope-ass Black things,’ Gates said.”

The Sullivan Center Target As Avatar Of Necessary Preservation

“The idea that [the ‘Goth Target’] has gone wild on social media is really beautiful. People are understanding that the structure is significant, that it speaks to them, and that they find it really intriguing.” Max Abrams at Chicago magazine talks to Ward Miller, executive director of Preservation Chicago: “It almost doesn’t matter how you categorize these buildings or what you call them. I think the general feeling of the spirit is that this is a wonderful building. It shows the flexibility, vision, and the brilliance of these great architects for Chicago, and especially people like Louis Sullivan… We often forget that reinvestment in our historic buildings, especially our landmarks, is development. It brings about incredible heritage tourism. So if Chicago lost buildings like Carson, Pirie, Scott, would we be the same city? … If we’d saved more of those earlier buildings, perhaps we’d be even more recognized on the world scale.”

Water Tower Place Handed Over To Its Lender

“A year after losing its retail anchor, Macy’s, Water Tower Place is losing an owner,” reports David Roeder at the Sun-Times. “Brookfield Properties is turning over the vertical mall to its lender, a unit of New York-based insurer MetLife. The action indicates Brookfield believes the mall is worth less than an estimated $300 million in debt on the property. It’s another setback for a complex that once defined retail chic…”

“The art of hanging out seems to be waning in cities. The American Community Life Survey reported last year that only twenty-five percent of people living in areas with ‘very high’ amenity access—close to grocery stores, gyms, bowling alleys, and other ideal sites of chance encounters—actually socialize with strangers at least once a week,” writes Allie Conti at the Atlantic. “In 2019, about two-thirds of Americans said they had a favorite local place they went to regularly. That two-thirds has since dropped to a little more than half… Clearly, COVID-19’s arrival accelerated the problem—making small talk with strangers scaled back, because of infection risk, while some bars and restaurants became to-go establishments, discouraging loitering.”

Dinkel’s Bakery will close on April 30, reports Block Club Chicago. The bakery at 3329 North Lincoln “opened in 1922 under Joseph and Antonie Dinkel. It’s been run by four generations of the family, and questions about it being sold have come up before—but a closing sign was posted in the window Tuesday. ‘To our customers and neighbors. Thank you …… 101 years serving you… But it is time.” From the Sun-Times: “It’s a somber note, but we’re going out with a bang instead of a whimper,” says worker Philip O’Reilly. “Everyone will come in here every day until we close … It’s a last chance to make people smile.” (Dinkel’s tells its own story here.)

Not “The Simpsons”: “Jewel-Osco has stopped selling coconut milk tied to a producer that allegedly used chained and caged monkeys for labor,” reports Crain’s. “The brand in question is Chaokoh, which operates in Thailand’s coconut-picking industry. PETA Asia conducted multiple undercover investigations into the company, which found cruelty to monkeys on every farm… Other chains, such as Target and Publix, previously stopped selling the products.”

“Chicago’s craft brewers are asking fans to call their legislators in Springfield and urge them to support a bill that would send assistance to brewpubs, distilleries and other businesses,” reports Block Club. “State Senator Sara Feigenholtz (D-Chicago) introduced a bill in February that would set aside $125 million from federal relief funds for restaurants and bars in Illinois. The hospitality industry is the state’s largest employment sector, and at least 11,000 Illinois restaurants, bars and other venues have closed during the pandemic, Feigenholtz said.. Only about twenty percent of breweries received Restaurant Revitalization Fund support before money ran out… Many more are waiting to see if they’ll get relief under Illinois’ Back to Business grant program.”

Springfield is considering an expansion of the state’s film production tax credit, reports Axios Chicago. “The Illinois Production Alliance and the Chicagoland Chamber of Commerce want to see the tax credit expanded to remain competitive with other states, including Michigan and Indiana. They’re calling for an industry-funded workforce development program for film training, with an emphasis on jobs for women and minorities, as well as more non-resident positions.” More here.

Efforts To Ban Books Quadrupled In 2021

The American Library Association, reports NPR, says “there have been more challenges to books than they have seen since they started tracking it in 2000. The ALA’s Office for Intellectual Freedom counted 729 challenges to library, school, and university materials in 2021… Last year the group noted 156 challenges — and in 2019, there were 377. Although the 2020 number was [affected] by the pandemic, which forced schools and libraries to shut down, the ALA said they don’t usually get more than 500 book challenges in any given year… The number of individual books challenged in 2021 totaled 1,597.”

‘Two weeks into the war on Ukraine, Brent Renaud was shot and killed in an ambush outside Irpin, where he was working on a documentary about refugees,” Ann Marie Lipinski writes in a remembrance at Nieman Reports. “Visual journalism, so dependent on proximity, carries heightened risk during conflict… Fearless. Ballsy. Badass. Certain descriptions of Brent in the days following his death offered caricatures of conflict journalists and obscured the man many of us knew. They didn’t capture his kindness and humility, or the humanity that was a hallmark of his work, whether documenting heroin addicts in New York or the Arkansas National Guard in Iraq. ‘Thoughtful stories about disenfranchised people’ was how he described his mission.” More on Renaud and wartime newsgathering here.

On Saturday, April 9 at 7pm, the Chicago Lyric Opera Orchestra and chorus members from the Lyric Opera Stage Artists will perform the “We Stand with Ukraine” benefit concert at St. Nicholas Ukrainian Catholic Cathedral at 835 North Oakley, presented by the Ukrainian Institute of Modern Art, St. Nicholas Cathedral School, and Chicago Sister Cities International Kyiv Committee. Proceeds will support the needs of newly arrived Ukrainian children enrolling in St. Nicholas Cathedral School, as well as humanitarian aid to Ukraine. Conducted by Michael Holian, the “We Stand with Ukraine” Benefit Concert will feature music of Lysenko, Hulak-Artemovsky, Skoryk, Webber, Elgar and Verdi. The $100 tickets are here.

The Chicago Symphony Orchestra announced the death of Jonathan Pegis, 61, who was a member of the cello section from 1986 until 2018. “I am deeply saddened to learn of the passing of Jon Pegis, a very kind person and a wonderful player,” commented Riccardo Muti. “I will remember him and his wonderful contribution to the Chicago Symphony Orchestra.”

Tweets the Trib’s Chris Jones: “The official opening of the ‘Moulin Rouge’ Broadway tour in Chicago tomorrow night has been nixed…..postponed until Apr 21 (!), due to COVID cases in the company… Shows going on with understudies in lead roles.”

Collaboraction has opened submissions for The Light, its yearlong, residency-like training program for youth “artivists” (artists-activists) in Chicago “to illuminate community, connection, and social change through performance and design.” Now in year two, The Light will recruit, cultivate and provide performance platforms, both live and digital, for two ensembles.  Collaboraction will select five youth Performance Activists, who will pair with mentors to create and perform original solo works. Collaboraction has expanded The Light to include a second group of Production Activists, five youth who will work alongside industry professionals in design and technical skills including light, sound, video, costumes, scenic design and stage management. The submission deadline for both groups, Performance Activists and Production Activists, is May 20. Submissions here.

The Chicago Academy of Sciences / Peggy Notebaert Nature Museum has announced a $1.5 million construction project to transform a portion of the museum into a state-of-the-art Sustainability Center that will serve as an interactive exhibit and resource center that focuses on human values and the importance of living in balance with the environment. Featured will be rotating exhibits that highlight current practices in sustainability and ordinary people doing extraordinary things in the fight to save our environment. “We have been a leading voice in sustainable living and conservation science in the Chicago area for 165 years, and this new addition will make our voice even stronger,” Deb Lahey, president and CEO of the Chicago Academy of Sciences / Peggy Notebaert Nature Museum says in a release. “The exhibit will allow us to continue to share our expertise, resources, and philosophy with all our visitors through fascinating and accessible interactivities and digital content.” More here.

The Chicago area has four new billionaires, Forbes reports on its annual World’s Billionaire list, which includes twenty-five names from Chicago or the suburbs, reports the Sun-Times. “Retaining his No. 1 spot in the local standings, to no one’s surprise, is Ken Griffin, founder and CEO of the Citadel hedge fund, with a worth pegged at $27.2 billion, good for fifty-third place on the list of the global rich.” Insurance figure Patrick Ryan was listed as the second-richest, at $8 billion. “Rounding out the top five area billionaires are Sam Zell, $5.8 billion; Morningstar Chairman Joe Mansueto, $5.7 billion; and real estate and casino investor Neil Bluhm, $5.5 billion. Gov. J.B. Pritzker’s worth is estimated at $3.6 billion and he checks in as tenth on the list. Three more members of the Pritzker family also are ranked.”