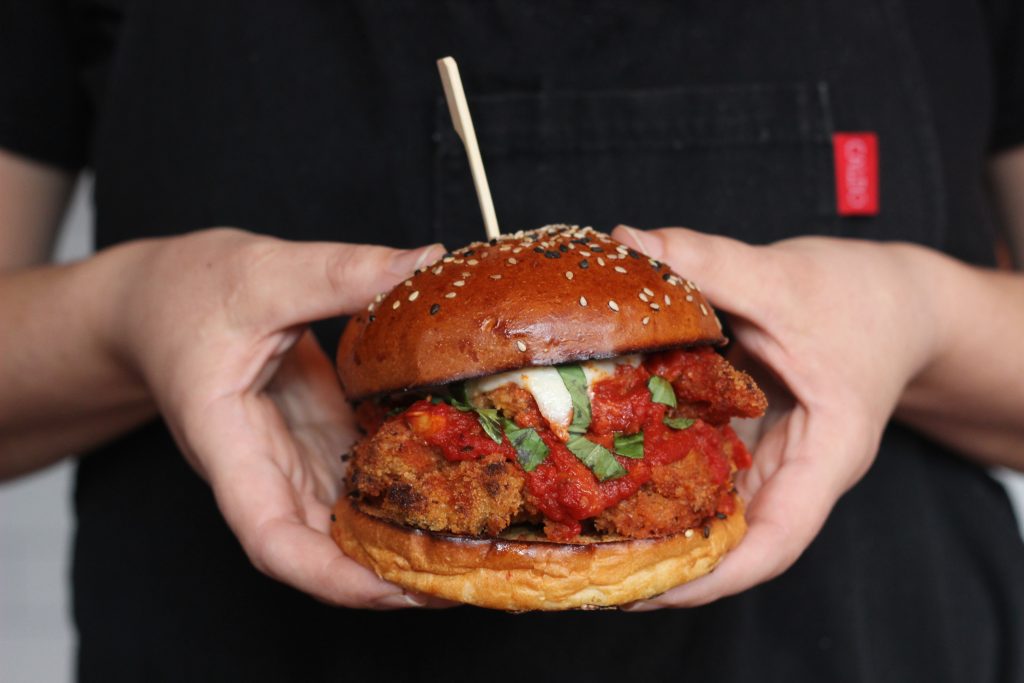 Why The Orange Garden Chop Suey Neon Sign Was Sold

“The owners of Orange Garden Chinese Restaurant are selling the ninety-year-old business after auctioning its iconic neon ‘Chop Suey’ sign, hoping to find a buyer to preserve the eatery specializing in Cantonese fare,” reports Block Club Chicago. “The Ruan family has owned Orange Garden since the 1980s… Co-owner Julie Ruan said the restaurant has existed in the same location since the early 1930s — the bright neon sign shining as an instantly recognizable welcome mat…Ruan said the sign had become more expensive and arduous to maintain with city zoning regulations and rising permit fees. According to city codes, any sign that extends over a public way requires a public way use permit and City Council approval… ‘Doing business in the city of Chicago is not easy… Sooner or later, the city will change the requirement further. I don’t want to take it down then, and then go through that hassle.'”

A History Of The Lillian Marcie Center’s Building

“When the Lillian Marcie Center team settled on the building at 4343 South Cottage Grove as the home for the next jewel in Chicago’s arts community crown, they could see it had a lot of character, but what they discovered under the rubble was a surprise,” reports WGN-TV. Built as a Marshall Field’s distribution center, “They might have had certain brick patterns, for decoration, but really what these buildings need to do was not burn down,” said Adam Rubin from the Chicago Architecture Center. “Gayle Soucek, author of ‘Marshall Field’s, The Store Than Helped Build Chicago’ says that the engineering was less about style and more of a necessity. ‘That building especially was built after the Chicago fire, so they certainly wanted the merchandise well-protected, but a lot of it had to do with the weight… That location was both a stable and a warehouse and you could kind of think of it as an early Amazon distribution center.'”

“Growth is on its way to Grafton, Illinois after people were able to get their hands on free land in one neighborhood,” reports KSDK News. “Through the land reimbursement program, a buyer pays the city $5,000 for a lot in the Grafton Hills subdivision. The buyer has three years to build a home on the lot, do a final inspection and turn in an occupancy permit. At completion, the city would reimburse the homeowner the $5,000… Grafton, which sits on the edge of the Mississippi River, has a population of about 650… It declined when a flood swept through in 1993 and about 600 people lost their homes. Mayor Michael Morrow said that is when Grafton Hills was born on the bluff, an opportunity for families to rebuild above the water… The land reimbursement program is through FEMA.”

On The Englewood Whole Foods Exit, And The TIF Money Invested

“In disinvested Chicago communities, grocery store openings yield press conferences. They’re inspiring. When grocers or other businesses close, they leave residents pondering how to create other retail or economic development opportunities. It’s deflating—and far too common,” writes Natalie Moore at WBEZ. “Even with a Whole Foods that has been engaged by the community like this one is—when you’re community-owned versus corporate-owned, there’s a big distinction,” Rami Nashishibi of the nonprofit Inner-City Muslim Action Network told Moore. “You’re not beholden to someone’s decision-making that really is not as deeply connected or concerned about the quality of a neighborhood like Englewood.” Walter Robb, the former Whole Foods co-CEO who considered this a passion project, said “he has no regrets about Whole Foods coming to the neighborhood. The experience connected him to the community. He’s a member of the Resident Association of Greater Englewood and every year personally foots the $50,000 bill for its business pitch contest.”

At the Reader, Ben Joravsky reminisces about the days when Bruce Rauner and Rahm Emanuel were ready to break the bank for Amazon and Jeff Bezos, and explains why the TIF money has already been invested: “As the TIF guy, I’m getting calls from readers asking—why can’t the mayor force Amazon, which owns Whole Foods, to give back the $10.7 million TIF handout they got for their grocery store at 63rd and Halsted? The short answer is that the handout didn’t go to Whole Foods. It went to the developers who built the store. They got it to cover infrastructure costs in a deal approved by the City Council in 2014… Tax increment financing program dollars are supposed to be spent in low-income neighborhoods. They’re not supposed to be spent on already gentrifying near-Northside neighborhoods like the one that got $1.3 billion for Lincoln Yards. Think about that—$10.7 million for a poor neighborhood on the south side versus $1.3 billion for a rich one up north. That tells you everything you need to know about the unfairness of Chicago’s TIF program.”

Logan Square’s Lardon has rounded up Chicago chefs to join them at their daytime salumeria and café for a lineup of sandwiches for a cause. “Yes, Chef! A Charity Sandwich Series,” via Lardon chef Chris Thompson and owner Steve Lewis, will feature an entirely new sandwich each month, running throughout the summer from a featured guest chef. A portion of proceeds will go toward a one-week summer culinary camp for a CPS student at Yes, Chef! Culinary Camp by the Foundation for Culinary Arts. The mission of Yes, Chef! is to provide life skills and to place economically disadvantaged CPS high school students on a viable career track. “The city’s reigning meat and charcuterie kings come together as Publican Quality Meats’ notorious whole animal chef and butcher Rob Levitt upgrades one of Chicago’s most legendary sandwiches (the PQM Chicken Parm #2) with the PQM Chicken Parm 3.0. Only available at Lardon, take a bite of a delicious fried chicken thigh simmered with zesty marinara, fresh mozzarella, Parmigiano Reggiano and basil packed into a sesame roll toasted with garlic butter.” More here.

Looking At The Jean Banchet Awards

Eater Chicago searches out the origins of the Jean Banchet Awards in around 2,000 words: “For those in Chicago’s restaurant scene, [the origins of] the Jean Banchet Awards, recognizing excellence in the local food and beverage industry [remain] a mystery, even for industry insiders… ‘We want mysterious,’ says Mike Gebert, the writer behind the website Fooditor, who has contributed to the show’s scripts, but has not served as a panelist. Gebert claims even with his involvement in the Banchets, he doesn’t know the identity of the panelists. ‘I was saying we should claim that they’re chosen by Franciscan monks who have taken a vow of silence. So that’s my story, and I’m sticking with it.'”

The 18,000-square-foot food hall promised for the Old Post Office will open soon, reports the Trib. “The team behind the project hopes it will help breathe life back into Chicago’s downtown.” “From Here On” “is the project of Chicago-based hospitality group 16″ On Center, the team behind music venues such as The Empty Bottle and Thalia Hall and a bevy of Chicago food and drink spots including Good Ambler and Dusek’s Tavern. 16″ On Center also operates the Revival Food Hall on the ground floor of The National high-rise in the Loop; the Old Post Office food hall will be the group’s third, after Revival and a project slated to open in New York later this month. Roughly a dozen vendors, all Chicago based, will set up shop.”

“Ongoing droughts, flooding, extreme weather, it’s all on the table. What may not be on the table: California avocados, predicted to go all but extinct by 2050,” predict the assembled at Bon Appetit. “It’s the seeds, farming practices, technology, water, distribution, and behind-the-scenes innovations that are going to change the contents of our plates… Personalized nutrition was the phrase I heard most from food industry experts, like the head of R&D at PepsiCo, which recently launched a sweat patch to tell you when you need more Gatorade (often). What 23andMe did for genetics, we’ll see in the nutrition and gut-health departments. Imagine a wristwatch that pings you when your sodium’s high. Cool! Creepy!”

Chef Trevor Hoyte is the mind behind the new menu at Loews Chicago Hotel, and he talks origins in an interview at the TRiiBE. “Originally from Barbados, he became the hotel’s executive chef in July 2021, bringing more than twenty-six years of culinary and hospitality industry experience with him.” Hoyte manages the lobby level ETA Restaurant + Bar and the rooftop Streeterville Social. “The Streeterville Social menu is social, fun, relaxed and a shareable experience in a very beautiful outdoor atmosphere in the center of the city. We will also offer large-format beverages to enjoy with friends with the hope that social gatherings will be back to normal this summer. The menu is intended for guests to order three to four items that can be shared among two people and add more as you go.”

Would We Not Invent Public Libraries Today?

In a Trib opinion piece, author John Warner writes, “Thank goodness public libraries already exist, because if they didn’t, there’s no way we’d ever be able to establish similar institutions in today’s dis-United States of America. There are a number of reasons I’m skeptical. For one, belief in institutions, in general, is at an all-time low ebb. Government, schools, churches—the entities in which people are expected to come together and sacrifice some portion of their individual well-being for an overall increase in the common good—either have significantly less salience in today’s society (churches), or are under direct assault by forces that seem to not just be partisan politically, but actively anti-democracy… Our inability to act collectively to mitigate the worst effects of the pandemic is illustrative here. Inconvenience or discomfort, or worse, someone else getting something one thinks they might not ‘deserve’ would all make libraries a difficult sell.”

“After a three-year break, Chicago’s beloved used-book extravaganza is back,” the Newberry Library announces of this year’s book fair. “Readers will once again be able to browse thousands of titles in dozens of categories, including fiction, philosophy, history, art, cooking, children’s literature, and much, much more. With many items priced at just $3 or less, visitors can stock up on new reads and expand their own personal libraries on the cheap.” All proceeds support the Newberry Library. 60 West Walton, July 29-31, 10am-6pm. More on the Newberry here.

Chicago Jazz Philharmonic will host its annual “Think Big” Gala on Thursday, May 12 at City Winery. With host LeeAnn Trotter, the organization will present the “Think Big” award to Tom Hurvis, president of Caerus Foundation, Inc., who for decades has been a leader in Chicago’s philanthropic, education and cultural sectors. CJP will also present its “Jazz Alive Educators” award to Dr. Roosevelt Griffin, founder-CEO of the Griffin Institute of Performing Arts, and the inaugural “Fierce Impact” award to the Ukrainian Institute of Modern Art. Tickets and more here.