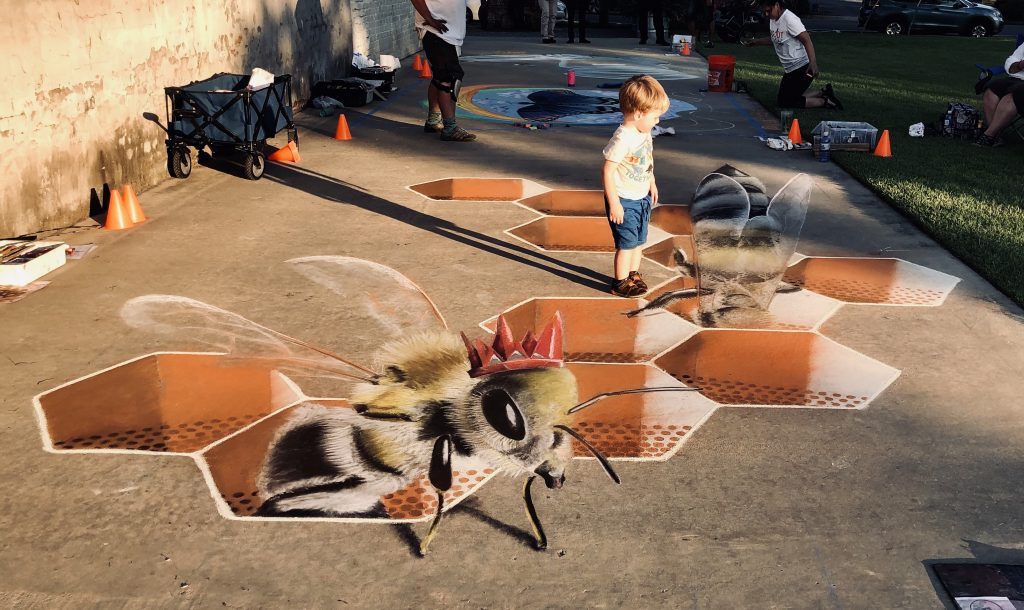 The Art Center Highland Park hosts for a second year the community-based sidewalk chalk art event, Draw Together, to support their outreach and arts educational programming. This year’s event will be Saturday, June 11, with visitors invited to use sidewalk chalk to decorate the sidewalks surrounding the building while enjoying music, food and fun. Created as a summer option while early pandemic restrictions called for outdoor events, dozens of sidewalk squares were decorated with hundreds of participants from other North Shore neighborhoods, as well as three states and four countries. More here.

“A coalition of organizations, uniting around what they call a ‘sustainable vision’ to save two State Street skyscrapers from the wrecking ball, [have proposed] that they be turned into an archives center for scholarly research,” reports David Roeder at the Sun-Times. “Around twenty religious orders along with Dominican University in River Forest have expressed interest in taking space in the towers, built in the early twentieth century, said Ward Miller, executive director of Preservation Chicago. He said nonreligious organizations, such as museums, also could join what’s being called the Chicago Collaborative Archive Center. The federal government owns the vacant towers, in the 200 block of South State Street, and wants them demolished, saying they pose a security risk to the neighboring Dirksen Federal Building. Advocates for saving them argue that archival storage would minimize any security threat and allow windows facing the federal building to be sealed off.”

“Carvana, the company known for selling used cars out of glass tower buildings, has run into legal and financial roadblocks that cast uncertainty on its plans to build in Skokie. The state of Illinois has stopped it from doing business here at the same time the company announced it is laying off 2,500 employees nationally and cutting spending,” reports the Trib. “Skokie’s village attorney told the company in a letter to stop work on the fourteen-story glass curtain wall tower it is building in the 9800 block of Woods Drive.”

Portillo’s Has A Vegan Dog

Portillo’s has “introduced its first vegan dog in collaboration with Field Roast, a plant-based meat and cheese company out of Seattle,” reports Eater Chicago. “The Garden Dog, seasoned with black pepper, paprika, and garlic, is the same size as the standard meat dog… and is prepared the same way: chargrilled on a special meat-free portion of the grill, then topped with all the ‘dragged through the garden’ Chicago fixings. It replaces the portobello mushroom sandwich.”

For the first time in over seventy years, Garrett launches their most popular recipe, Garrett Mix, in grocery stores, beginning at Jewel-Osco (with additional stores to be added). “Pre-popped, individually sealed, and ready to devour, Garrett Mix will be available in six-ounce bags, and CheeseCorn in five-ounce bags,” Garrett says. “Yes, Garrett cooks are making this grocery line the same way they make it in the Shops: batch to batch, from scratch, right in their Chicago kitchen. Kernels are still hot air popped, and recipes are still handcrafted in copper kettles as they’ve been doing since 1949.”

The motion picture Academy’s Board of Governors has approved rules and campaign regulations for the 95th Academy Awards, which will be awarded March 12, 2023. The eligibility period for Academy Awards consideration will return to the full calendar year: a feature film must have a qualifying theatrical release date between January -December 31, 2022. The online Academy Screening Room for members will no longer be a method of qualification, as theaters have reopened; the six qualifying U.S. metropolitan areas continue to be Los Angeles County; the city of New York; the Bay Area; Chicago; Miami and Atlanta, and apply to general entry categories as well as the documentary and short film categories.

“Wicker Park artist Lajuana Lampkins is releasing a collection of poems and writings by her son, Prince Akbar, a Chicago poet and writer who Calumet City police shot and killed in 2010,” reports Block Club Chicago. “The Collected Works Of Prince Akbar AKA Jus Rhymz” “is a collection of Akbar’s work, ranging from poems to letters, blog posts and essays, with some of the writing dating back to his childhood. Lampkins edited and compiled the book.”

“A clause in the curfew crackdown would exempt teens coming home from music fests like Lollapalooza, which attracts wealthy white teens from the suburbs and tourists. And young Chicagoans say discouraging teens from the places they feel safe Downtown will only make violence in their neighborhoods worse,” reports Block Club Chicago. More details: “A new executive order directs Chicago police to ‘immediately increase enforcement’ of the new curfew and take teens who don’t comply into custody,” reports WBEZ of Mayor Lightfoot’s 10pm curfew. “Chicago teens coming home from concerts, ballgames or other ticketed events will be exempt from the city’s new curfew time if they can show documentation, like a ticket stub, as proof.” The ACLU of Illinois has criticized the order and is considering legal action.

“Court Theatre, the long-established professional theater in residence at the University of Chicago in Hyde Park, is the winner of the 2022 Tony Award for excellence in regional theater,” reports Chris Jones at the Chicago Tribune. “The award, which is returning this year after a two-year absence due to pandemic closures, was announced Wednesday by the American Theatre Wing and the Broadway League, following a recommendation by the American Theatre Critics Association.”

Feld Entertainment, the production entity behind Ringling Bros. Circus, confirmed that the show will come back sometime in 2023, but without animals, reports WGN-TV. “The three-ring circus, known for acts featuring lions, tigers and elephants, shut down in May 2017… In 2016, after a costly court battle, the circus agreed to remove the elephants from the show and send them to an elephant sanctuary in Florida. Once the elephants were dropped from the show, ticket sales declined dramatically. The show ended the next year after a 146-year run.” The New York Times: “Performers are being recruited and rehearsals and logistics are being planned for a fifty-something-city tour to begin in September of next year.”