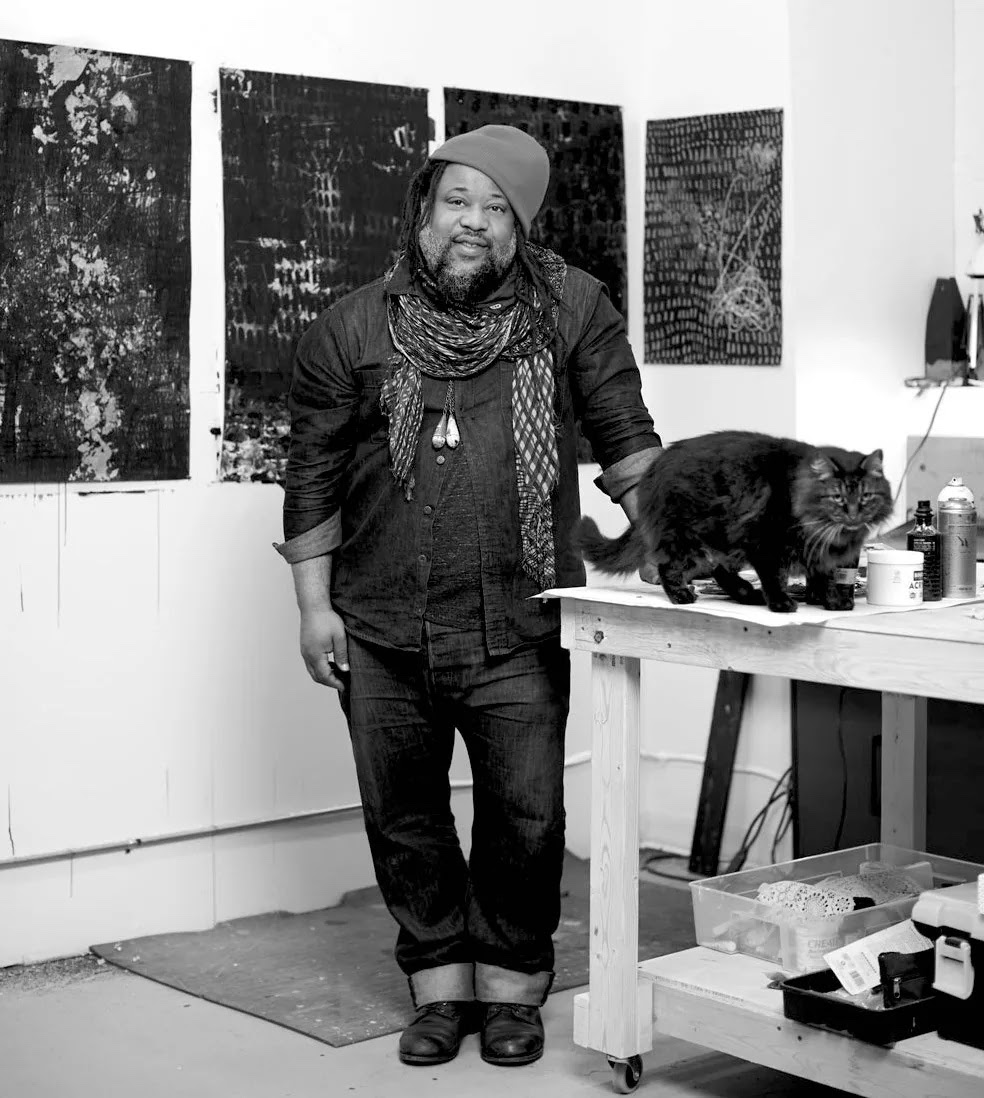 Michi Meko’s “Dark Was The Night, Cold Was The Ground” At Kavi Gupta

Kavi Gupta is presenting “Dark Was The Night, Cold Was The Ground,” a solo exhibition and catalogue of new work by Michi Meko, Joan Mitchell Foundation Grantee and Artadia Award winner. Featuring works created entirely during the pandemic, the exhibition reflects on Meko’s ideas and experiences during isolation. “Solitude is a strange currency—enriching to those who can mobilize its potential; a liability to those who cannot. For many of us, the forced isolation imposed by the pandemic exacerbated existing feelings of loneliness. When Meko saw the world going into quarantine back in 2020, he decided to embrace the inevitable. Packing a go bag and heading by himself deep into the north Georgia woods, he instigated an isolation within an isolation and found visibility within invisibility.”

“Being Black in the wilderness is an idea I’ve been trying to chase down or play with for a long time,” he says. “2020 gave me a green light to just take off and see what that’s like. I wrote a book of field notes and took photographs and made drawings. A lot of it was trying to hear my voice and understand what that meant—to hear one’s own voice in wild spaces. What does a Black man sound like in a wilderness, versus the voice of John Muir or Ernest Hemingway?” Meko transforms the gallery to evoke a lonesome campfire in the mountains, symbolically and abstractly depicting both the geographical and psychological wildernesses through which Meko has traveled. Through July 30. More here.

“When Maurice Cox, commissioner of Chicago’s Department of Planning and Development, was discussing the city’s new Invest South/West Initiative, he described these [neglected historic] buildings as ‘sleeping beauties’: buildings on formerly active commercial corridors that loomed large in people’s minds and just needed someone to reactivate them. The initiative is a $1.4 billion ten-neighborhood vision to find community-oriented catalyzing developments in oft-overlooked neighborhood corridors, including the Laramie State Bank Building,” reports Architect Magazine in an illustrated report. The projects are “revitalizing the modern skeletons of once-vital community and economic infrastructure [and] highlight the potential of adaptive reuse not just to ring a classic building back to life but to heal a void in one of the city’s disinvested neighborhoods. Often, these projects can be completed with a speed and more economical cost that make them a key part of larger development strategies. It’s a running theme both across the nation and especially in Chicago.”

“The Episcopal Diocese of Chicago is headed back into the property markets,” reports David Roeder at the Sun-Times. “The diocese, the denomination’s headquarters for northern Illinois, operates from a nearly half-block site on the southwest corner of Huron and Rush streets. ‘With a five-story building and a plaza, it’s the kind of underused site in a prime neighborhood that ordinarily would have developers scheming to get hold of it… The church seems to always wait until there’s a downturn in the market to put its property up for sale,’ said James Letchinger, head of JDL Development… That sums up the diocese’s predicament. Headwinds in the market threaten to slow the pace of high-rise construction by making it more risky. Inflation is driving up the cost of labor and building materials, while rising mortgage rates could sideline some buyers. The pandemic has created enough uncertainty about the appeal of city living that developers of residential mega-projects are taking it slow.”

“With just weeks until summer, it remains uncertain if many of Chicago’s public Park District pools will open because of a lifeguard shortage,” reports Block Club Chicago. “Park District officials say they will prioritize sending lifeguards to the beaches, where most of Chicago heads for the summer. But without easy access to the lakefront, West Side residents worry the Park District’s plan may leave them high and dry.” Claude Robinson, head of the North Lawndale Athletic and Recreation Association tells Block Club, “There’s not a lake that people can just walk to or get to easily. There are transportation barriers there. As many opportunities that are close for young people in North Lawndale, we need to make sure that’s a priority.”

Northwestern Medicine has announced plans for an outpatient center on the 4800 block of South Cottage Grove in Bronzeville, reports Urbanize Chicago. “Conceived as a new 120,000-square-foot advanced outpatient care center, the healthcare offering will offer patients… an Immediate Care Center to provide urgent care, primary and specialty care by Northwestern Medicine physicians, pharmacy services, diagnostic services including mammograms and lab tests, a cancer center with chemotherapy services, and resources and programming for individual and community health.”

Semi-retired opinion columnist John Kass continues to bite the hand (and profession) that fed him for decades. Mark Jacob posted about a Kass column that insinuated journalists are unpatriotic: “I try to ignore Chicago propagandist John Kass, but his claim that news media groan during patriotic holidays pisses me off. Never once in my thirty-five-plus years of newspapering did I hear anyone gripe about covering patriotic events. Kass just likes to cheap-shot real journalists.” Former Chicago Tribune transportation reporter Richard Wronski: “I groan whenever Kass whines about ‘the media’ or ‘corporate media’ or ‘the elitist media,’ as if he didn’t make a good living for decades working for Tribune Co., formerly one of the biggest media corporations, and then take a generous voluntary buyout to leave.” Kass also misspelled his own name in a recent blog post; “JohnKasNews.com” now directs to a January 2021 consideration of Kass by a currently employed Sun-Times columnist.

Reflecting on the lies that were published about grading at Oak Park and River Forest High School, media columnist Margaret Sullivan writes about the “pink slime” sites that provide them. “Increasingly, ‘articles’ that look like news may be something entirely different—false or misleading information grounded not in evidence but in partisan politics, produced not by reporters for a local newspaper but by inexperienced writers who are paid, in essence, to spread propaganda.” The lie “found a ready audience. ‘But of course,’ tweeted the conservative author Andrew Sullivan, as he shared the story to his hundreds of thousands of followers… This single incident was bad enough; what’s worse is what it shows us about our poisoned news environment. While fact-based, accountable local newspapers are struggling to survive — many of them facing budget cuts or closure—what’s known as ‘pink slime’ sites are sneakily trying to fill the void. They traffic in falsehood and exaggeration, paid for by political groups, especially on the right… Pink slime news sites are often funded through secret and politically motivated ‘dark money’ contributions. And they are growing fast. In 2020, the Tow Center for Digital Journalism at the Columbia Journalism School identified at least 1,200 such sites.”

Where Readers Go When Paywalls Go Up

“The latest era for the elite mainstream media — that is the heavily paywalled, rule-bound, college-educated-reader-focused American news media,” observes Choire Sicha at Intelligencer, considering the online coverage of the Depp-Heard trial. “Publications from the New York Times to the Atlantic to this magazine have doubled down on serving paying subscribers. Our paywalls have become tighter; our quest for elite readers more thirsty…At the same time, a new media class has exploded: creators and influencers working all the lanes, from lifestyle fluff to political opinion to citizen court reporters. Critical and suspicious of the stuffy traditional media, these social-media accounts comment on and sometimes even start the biggest conversations of the moment. They post fast and often—sometimes hundreds of times a day—and don’t have to pretend they’re objective. In fact, they’ve shown that news consumers are delighted when they pick sides. The most successful of them are sophisticated visual storytellers who know how to captivate an audience—and, as we’ve seen this spring, they have no qualms about flogging a famous woman.”

Chicago Children’s Choir is embarking on a nine-day, five-city tour of Egypt. The Choir has toured nationally and internationally since the 1960s, “leveraging the universal soul of music to connect people across cultures and geographies,” the CCC relays. “The upcoming tour of Egypt marks the first time the group has travelled since 2019. Among other standout experiences, Chicago Children’s Choir was the first civilian group to be allowed in the Demilitarized Zone in Korea, performed for Nelson Mandela following the end of apartheid in South Africa and collaborated with Bobby McFerrin in Scandinavia.” Sixty high-school-aged singers from across Chicago “will explore human history and forge bonds with Egyptian youth and artists. Alongside acclaimed Egyptian vocalist Nesma Mahgoub, Chicago Children’s Choir will perform at Cairo Opera House on June 21 and for an invitation-only audience of local youth at Tahrir Cultural Center on June 22.” More here.

Strawdog Theatre Company, one of Chicago’s oldest, non-Equity, ensemble theater companies has appointed Paul Cook as its managing director. Cook has served as production manager at Strawdog since 2019 and an ensemble member since 2020. Strawdog also welcomes Donna “Dante” Gary as its production manager. More on Strawdog here.

The American Company of Irish Dance presents the world premiere of its new show “Aisling” (ash-ling). “This is Irish dance as never before seen as it will be presented in a theatrical format with all-new music, choreography, and costuming and many new cast members from North America and Europe,” the group relays. “Aisling” opens in Wisconsin June 9 and closes in Chicago on June 17. “Aisling,” the Irish word for “dream” or “vision,” tells a story through all-new Irish dance choreography and newly composed Irish music, threaded together with the poetry of W.B. Yeats. Celtic folklore influences, plus characters inspired by Irish mythology, make for “Irish dance as you’ve never seen it before.” Show dates include The Raue Center in Crystal Lake on Thursday, June 16 and Chicago’s Harris Theater on Friday, June 17. More here. Tickets here.