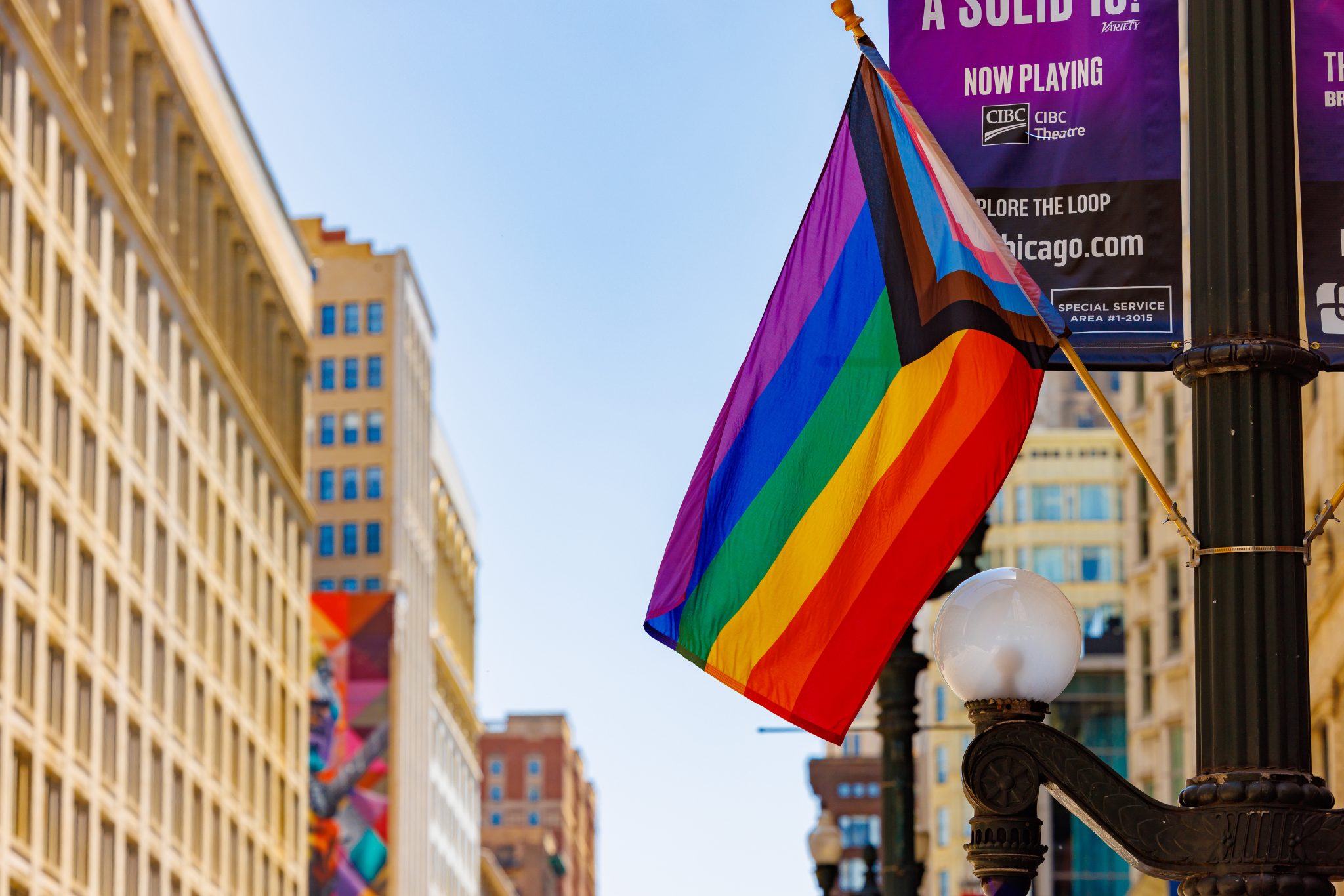 City To Reimburse Up To $1,020 For Home Surveillance

The city’s “Home and Business Protection Rebate Program will provide reimbursements to people who buy security cameras and a year of video storage, as well as outdoor lighting and vehicle GPS trackers,” reports Block Club. “When the rebate program was first announced… reimbursement was only guaranteed for those who registered their cameras with the Chicago Police Department, which would enable officers to use the footage during criminal investigations. This mandate was scrapped… and police registration is now optional. Police will not have direct access to cameras and won’t be able to access footage without consent, but registering would ‘simply allow CPD to request camera footage in the event of a crime.'” (Apply here.)

Chicago Loop Alliance has installed flags celebrating both Juneteenth and Pride Month along State Street from Ida B. Wells to Wacker Drive. The flags will be on display for all of June. “Since the Chicago Loop is ‘Everyone’s Neighborhood,’ it is important that we commemorate the celebrations of two distinctively influential groups in Chicago,” Michael Edwards, president and CEO of Chicago Loop Alliance says in a release. “The Black and LGBTQIA+ communities have long propelled Chicago into a vibrant urban attraction. Entertainment, arts and culture and more are often led through the innovation of underrepresented communities. We aim to support and champion the Black and LGBTQIA+ communities every day of the year, but especially so during the month of June.” More here.

Randolph Street Market returns to the West Loop-Fulton Market neighborhood July 30-31. In its nineteenth season the  midsummer event “will focus on unique, high-quality goods, live musical acts, fun food and cocktails in an entirely secure environment, and now customers can keep themselves and their vehicles safe-and-sound inside our gates with a brand-new multi-level onsite parking garage,” the market relays. “Presenting a curated selection of antiques, vintage and modern goods, find the top 175 dealers of vintage fashion, art, jewelry, decorative objects and retro furnishings for the home, global goods plus the best-of-the-best makers and independent designers who will be coming in from as far away as Seattle, Washington and Savannah.” The event also features a continuous line-up of live musical acts.

A new trading floor  has opened in a historic spot, a 40,000-square-foot floor in the Chicago Board of Trade Building, reports the Sun-Times. “Traders still show up in gaudy jackets, the better to be seen by others. There are still trading ‘pits,’ ten of them on the new floor, but they are laid out more like clusters, with stadium-style levels to improve sightlines. Everyone has computer screens in front of them. A quick glance tells them all they need to know about the market. They can trade electronically, yell their orders or, when times get busy, use the hand signals of the old days. ‘This is truly hybrid trading,’ said Ed Tilly, Cboe chairman. ‘It brings together the best of both worlds.'”

Jeff & Judes Deli is closing Sunday “after some very tough conversations and even tougher decisions,” the two-year-old restaurant, located diagonally across Western from the Empty Bottle, posts on Instagram. “The food cost + skilled labor that goes into making everything in-house proved to be problems we couldn’t beat, and sometimes things aren’t meant to be. Our last service will be Sunday 6/12 and we hope you’ll pop by to say hello or goodbye or anything in between. As for the building, we have something different already in the works which we can’t wait to share with you once we’ve closed this chapter. To our staff: thank you.”

Adds Eater Chicago: “The restaurant’s most popular items — its thick and juicy corned beef and pastrami sandwiches on sourdough marble rye—ultimately [led] to its biggest monetary snag. The staff cured the meat and baked the bread on-site, which, with the rising cost of ingredients, particularly beef, resulted in eighteen-dollar sandwiches. In January 2021, [owner Ursula] Siker took to social media to explain why complaints from patrons over the cost of menu items were disheartening. ‘We have been told that our sandwiches are too expensive as a matter of principle rather than quality,’ she wrote at the time. ‘Let me be frank; to say this is to directly imply that you do not believe the people making your food deserve a stable life.'”

“A semitrailer carrying over 7,000 pounds of frozen pies rolled over on Interstate 80 near Joliet, causing an hours-long traffic jam,” reports WLS-TV. “Illinois State Police said the truck was driving west on I-80, when its headlights [reportedly] malfunctioned just before 2:45am… The truck entered the center median and rolled over on the driver’s side.There were no injuries reported, but 7,700 pounds of frozen pies were lost.”

“Next World’s Fair menu explores the world of the White City through the senses of Grant Achatz’s immersive presentations, providing a unique and elegant take on the 1893 World’s Fair,” reports WGN. “For us, we were trying to make a menu that would kind of reflect what we’re going through in a way that we can put some history behind it,” executive chef Ed Tinoco tells the station. “Obviously with us going through a pandemic and into a hopefully now a better time, our creative process was on how we can showcase that through food, we felt that with us trying to recreate ourselves with and bring new technology in a way with new concepts, the World’s Fair was the perfect theme.”

Harold’s As Piece Of The Black Chicago Experience

“If Black Chicagoans have a favorite local chicken spot, it’s likely Harold’s Chicken Shack, which has been serving the city since 1950. Harold’s famous chicken, with its sweet-and-spicy sauce, is a pleasant reminder of home, of family gatherings, of a Black experience meant for them. In an ever-changing city with a history that runs deep in multiple directions, Harold’s Chicken has been a constant in Black communities.” Eater Chicago celebrates Harold’s: “The art of ordering and eating Harold’s Chicken can only be passed from one person to another, whoever they choose to share this delicacy with. You must know your order before stepping up to the cashier. The cashier doesn’t have time for you to think about your order… Don’t forget the mild sauce. Most popular chicken joints in Chicago have a mild sauce, but each one’s recipe is mostly unknown. Mild sauce is both sweet and tangy, and some say it is a combination of barbecue sauce, hot sauce, and ketchup. Each mild sauce found in the city is different, meant to go with its own chicken, according to [Larry] Legend, a complement to whatever herbs and spices were used to batter the chicken.”

“Baristas and other eligible workers at two Chicago Starbucks voted against joining a union, while one store narrowly voted in favor of the union,” reports the Sun-Times. “Baristas and other eligible workers assigned to stores at 155 North Wabash and 2543 North California opted not to join Workers United, part of the Service Employees International Union. Staff assigned to a store at 1174 East 55th narrowly voted in favor.” Notes the paper, “Starbucks CEO Howard Schultz has countered the union campaign by raising salaries for workers across the board and by promising improved benefits but only for stores not involved in organizing.”

“Ben & Jerry’s is galvanizing its millions of customers in a new lobbying push for tougher gun safety measures after last month’s mass shootings,” reports CNBC. “Christopher Miller, the head of global activism at the ice cream company, [says] that the company has called on its eight million Facebook fans and 515,000 Twitter followers to lobby lawmakers for stronger gun safety laws.”

“Marty Lennartz, a lifelong Chicagoan whose four decades at WXRT began as producer of Terri Hemmert’s morning show, is about to become morning host himself,” reports Robert Feder. Lennartz will shift to mornings from afternoons at the station on Monday. “Taking over the afternoon shift Monday will be Annalisa Parziale, just hired from WXRV in Boston. ‘I couldn’t be more excited about doing mornings on XRT and following in the footsteps of three of my best friends, Terri Hemmert, Lin Brehmer and Richard Milne.”

“His career spans more than three decades but Ira Glass is still eager as ever to create–and even compete with the likes of Joe Rogan, the enormously popular podcaster who flirts with conspiracy theories on his show,” reports the New Statesman. “‘Yeah. That’s fine,’ he said, with a diplomatic smile: ‘Happy to.’ But when it comes to taking credit for helping to create the blueprint for podcasts, he is more reserved. After some umming and ahhing, he finally opens up: ‘I think some of us are just raised… like, to not necessarily think that much of ourselves. And I’m a person like that.’ … When asked whether the media is capable of healing society’s fissures, he sounded bereft. ‘I don’t have a smart answer to that question,’ he replied, exasperated. ‘We’re in a war against misinformation and we’re not winning.'”

2nd Story announced the formation of a new pay equity-focused group of theaters—A Red Orchid, Congo Square and Teatro Vista —as part of the storytelling group’s larger initiative, The Rising Tide Project. “Launched in 2022, The Rising Tide Project is a yearlong effort to explore what it means for organizations to achieve pay equity, investigate new models of care and imagine a sector where arts workers are thriving as opposed to just surviving.” At the completion of The Leap To 15 campaign, during which 2nd Story achieved its goal to pay every artist it employs stipends based on $15 an hour, the organization found itself in a unique position: 2nd Story was artistically and financially stronger than it had been before launching the campaign. 2nd Story found that this investment was not only good for artists, it was good for business. Now, the twenty-three-year-old storytelling collective is working to support other leaders to take similar steps at their organizations.

“We believe that more organizations are closer to implementing pay equity policies than they think,” Amanda Delheimer, artistic director of 2nd Story says in a release, “And we want to identify and create tools that organizations can use no matter where they are on their pay equity journey, and share a model that helps to make the move to pay equity irresistible.” “At its core, the goal of The Rising Tide Project is to radically imagine what care looks like for all arts workers. We want to live in a community where every arts professional is paid equitably by every arts organization.” Lauren Sivak, managing director of 2nd Story adds, “We believe that when pay equity initiatives are implemented by more arts organizations, our sector will become more diverse, talented and vital. Without these initiatives, our sector will suffer.” More here.

“MJ” won’t make it to Chicago in the debut of its American tour until July 2023, but it’s getting scrutiny for its choreography on Broadway. “Don’t get me wrong: The musical ‘MJ’ is a misfire on so many levels that it’s hard to know where to begin,” writes Gia Kourlas at the New York Times. “’Thriller’ looks like a scene out of ‘Cats.’ The segment showing Michael Jackson’s dance influences—the Nicholas Brothers, Fred Astaire, Bob Fosse—is so poor in terms of skill level that I felt sorry for dance, the art form. Irritatingly, yet predictably, the show, directed by the ballet choreographer Christopher Wheeldon, has been nominated for ten Tony Awards. It will run for ages. Michael Jackson—for all his flaws—is still Michael Jackson.”

“A University of Chicago administrator and former Obama presidential adviser was named Monday to lead the Civic Committee and Commercial Club of Chicago,” reports the Trib. “Derek Douglas, 51, will become the first African American to serve as president of one of the city’s oldest and most influential civic groups, whose members include many of Chicago’s top business leaders.”