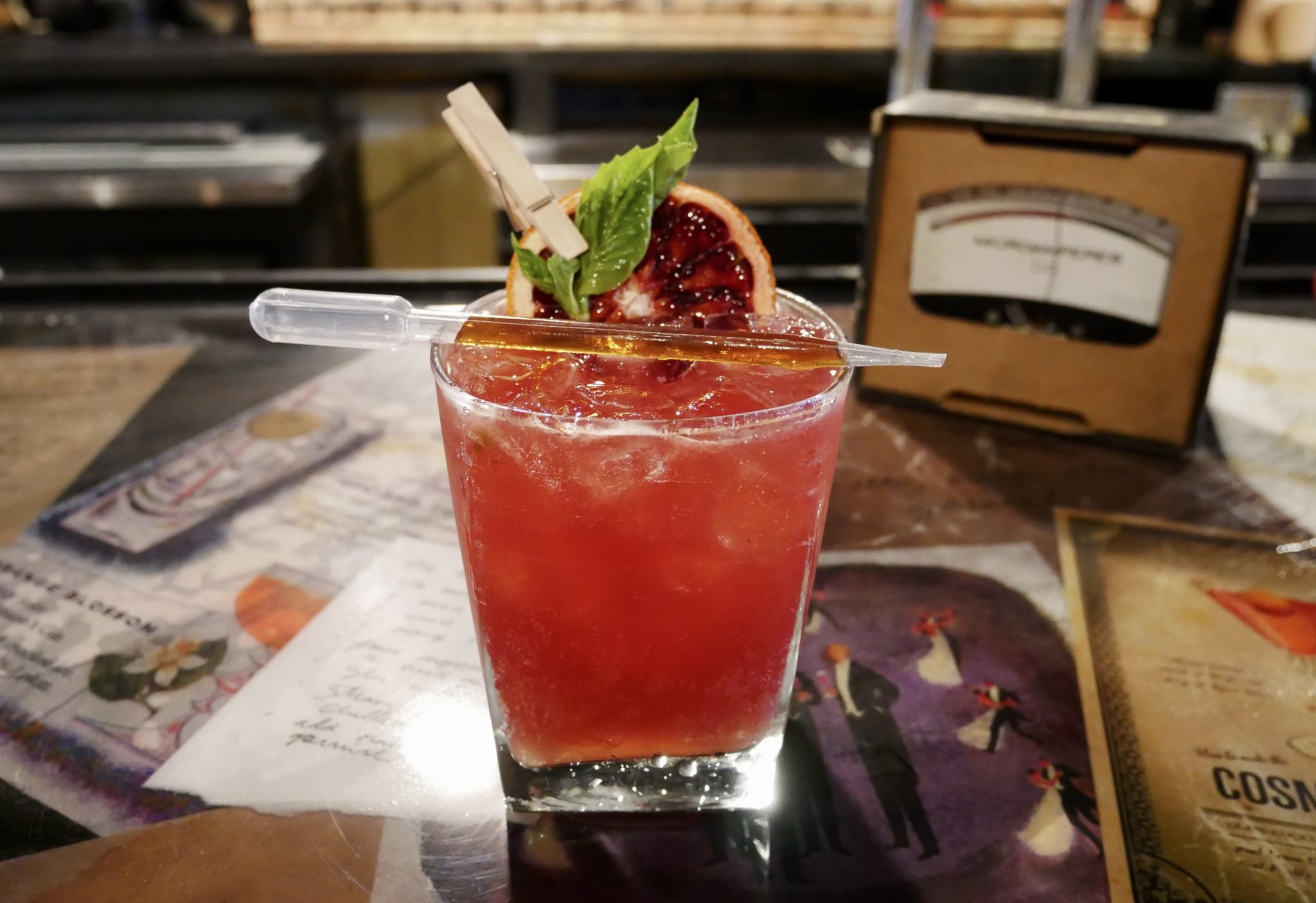 The Chain Smoker, at WHIM

“Chicago artist Theaster Gates has unveiled the cylindrical Black Chapel as this year’s Serpentine Pavilion in London’s Kensington Gardens,” reports Dezeen. “Realized with the architecture studio Adjaye Associates, the chapel-like structure topped with an oculus was designed by Gates to be a peaceful space within the London park.” “Black Chapel suggests that in these times there could be a space where one could rest from the pressures of the day and spend time in quietude,” Gates is quoted. “I have always wanted to build spaces that consider the power of sound and music as a healing mechanism and emotive force that allows people to enter a space of deep reflection and deep participation.”

The Old Town Art Fair is this weekend, June 11-12, in the heart of the Old Town Triangle Historic District, with over 200 nationally acclaimed artists, a garden walk, live music, food court and children’s corner, rain or shine. More here.

Governor JB Pritzker has designated Dolostone as the official rock of the State of Illinois. House Bill 4261 began as an initiative led by a group of elementary school students from Pleasantdale Middle School in Burr Ridge and Maplebrook Elementary School in Naperville. After the students discovered that Illinois did not have a state rock, they created a ballot and had students across the state vote. Dolostone, a form of limestone, forms the majority of Illinois’ bedrock, establishing a foundation for the state’s natural terrain.

The Great Pushback Against Urban Progressives

Slate editor Jordan Weissmann points toward a provocative piece: “By failing to do anything about swelling homelessness, urban progressives have fed a sense of public disorder that’s putting all sort of reforms at risk.” In the piece, Henry Grabar writes of Tuesday results in Los Angeles and San Francisco, “The voting will be seen as part of the same backlash against progressive urban policy—and in particular, the ‘Defund the Police’ slogan—that began with last year’s election of the ex-cop Eric Adams in New York City. Fair enough. In all three cities, the race was run on a single issue, urban disorder, its two components so closely linked in the public imagination they are often part of the same breath: crime and homelessness… Crime and homelessness are not, in fact, the same issue at all. They are not meaningfully correlated; they do not share causes; they do not share solutions. But in both San Francisco and Los Angeles, Democrats’ inability to address the homelessness crisis is going to cost them generational progress on criminal justice, as the forces for reforming the police go into retreat.”

“One month after city transportation officials allowed Lyft to pepper its electric scooters around the Chicago’s downtown, appeals filed by two competing e-scooter companies that were denied licenses are holding up the proliferation of scooters across the city’s neighborhoods,” reports the Daily Line.

Midway And O’Hare Get Lactation Pods

“The Chicago Department of Aviation is installing eleven lactation pods at O’Hare and Midway airports, offering private, freestanding stations for nursing mothers at no charge,” reports the Trib.

“Rêve Burger, the early pandemic side project from fine dining chef Curtis Duffy of the two-Michelin-star restaurant Ever, will permanently close on Saturday, July 2 at 1363 West Fulton,” reports Eater Chicago. The building will be razed to build another Fulton Market tower, the restaurant posts on Instagram.

“Whether timeless or short-lived, one thing I never get used to as a food writer is closures, especially of the places I’ve long frequented,” reflects Michael Nagrant at The Hunger. “I always hated scenes from TV shows where like the whole cast ends up drinking together after work at some local bar. In the case of ‘ER,’ I always wondered, if George Clooney and Anthony Edwards are both doing Jäger-shots in the same tavern, what happens if someone needs emergency surgery at County General? … Like Emmit’s I also had a warm spot for Jeff and Jude’s and Reve… When the places where we make our lives close, it’s a smack in the face of progress, especially for the dreamers who birthed them into being. For all of us, a shuttering is an obituary for our former lives. If you really wanna get dark, a restaurant closure, especially a beloved one, is also a stark reminder that we’re all gonna die.”

A Westmont Jewel-Osco has built a display containing more than 70,000 pounds of bananas, reports WGN-TV. “An official Guinness World Record adjudicator will be at the location to verify and confirm the record.” Customers will be given bananas, with any remaining donated to a local food bank.

“’Growing up I was surrounded by this conversation of racism, oppression, colonialism,’ says Jordan Wimby, whose mother and grandparents were teachers (most of them CPS) who specialized in American and African American history, and Egyptology,” writes Mike Sula in a profile of “The Melanin Martha” at the Reader. “‘We talked about slavery. We talked about sharecropping. We talked about all these things I wasn’t learning in-depth in school. But at the same time we weren’t eating cultural foods, which was kind of confusing to me because my family was so embedded in Black history and Black culture.” As a latchkey kid, she watched the Food Network. “My mom started seeing how passionate I was about food and cooking and she was like, ‘OK, I’ll buy the groceries if you wanna try some recipes. Just don’t burn the house down.’” “Today Wimby, who’s twenty-seven, is known as The Melanin Martha, a home cook exploring the intersection of food and Black identity, tapping into inspiration from the African diaspora and addressing issues of access, trauma, heritage, queerness, comfort and self-care through cooking. She’s worked as a private chef, conducted cooking workshops for corporate clients [and] run bake sales through her Instagram.”

WHIM is an “over-the-top venue” that will “combine a storied history of performative art with inviting and unprecedented libations.” Opening Saturday, June 25, “WHIM will invite guests to partake in a whimsical night out inside a world where all art forms come together, paintings, music, sculpture, street art and live performance. The adventure will begin the minute guests walk into WHIM. Guests will be greeted by the ‘Lobby of Second Chances,’ featuring an artistic explosion of creations (both big and small) fashioned out of found objects–giving them a second chance as a one-of-a-kind piece of art. Offering a lively space to lift a glass, celebrate the day, and connect with others, Second Chance also houses the ‘Second Shots Bar,’ an extension of the lobby, also featuring found-art installations. From there, visitors may enjoy the ‘Enchanted Forest,’ featuring distinct areas inspired by future WHIM spaces, a stage for live performances, and a giant enchanted tree.” Pictured above: The Chain Smoker, with tequila reposado, mezcal, bitters, agave syrup, smoked with cherry wood chips and spritzed with orange zest. More here.

“Cumulus Media is turning to longtime Chicago radio personality Steve Cochran to bring back listeners,” reports Robert Feder. Cochran, former morning host at WGN-AM, has signed to host mornings at WLS starting June 15. “’I’m delighted to welcome Steve to our team, where I know he will bring his wisdom, wit and political prowess to morning drive,’ Stephanie Tichenor, program director of WLS, said in an email to staff.”

What Does A New Editor Of The New York Times Mean?

“Joe Kahn takes over next week as executive editor of The New York Times as the newspaper is riding high on a new crop of Pulitzer Prizes, recent acquisitions of the sports site The Athletic and Wordle, and record levels of digital subscriptions,” reports David Folkenflik at NPR in a long interview with the wealthy longtime Times editor. “The New York Times can’t exist in Hungary, it can’t exist in China. It can’t exist in Russia… It exists only in the context of respect for the role of a high quality, nonpartisan press in a thriving and functioning democracy where we’re protected by rule of law and where we work directly for our readers, not for any kind of political power or other institution. So you can’t have independent journalism in a non-free society, and we are not impartial about whether or not this [nation] becomes a non-free society.”

Numero Group goes long on Twitter, announcing its most epic project: the Blondie omnibus, “Against The Odds 1974-1982,” releasing August 26. “Numero & Blondie are pleased to announce ‘Against The Odds 1974-1982,’ coming August 26 on Numero-exclusive Platinum Blonde super-deluxe vinyl, 8CD, 4LP, or 3CD. When we first entered Chris Stein’s Woodstock barn some six years ago, we knew we’d found the next great Numero box set. ‘Blondie: Against The Odds 1974-1982’ gathers the original line-up’s six albums, four additional LPs of session outtakes, B-sides, and demos, a 10” with the 1975 Alan Betrock demo and an unissued 1974 tape, plus a 45rpm single—a whopping 124 studio tracks in all. Erin Osmon’s 35,000-word notes tell the Blondie’s story in exacting detail, with session commentary from Debbie, Chris, Clem, Jimmy, Frank, Nigel, and Gary, and essays from producers Richard Gottehrer and Mike Chapman all housed in a glorious foil-wrapped, 144-page, hardcover book. A second 120-page volume gives a discographical overview of the period via hundreds of pic sleeves, labels, international variants, flexis, tapes, and even 8-tracks. Weighing in at seventeen pounds, this is hands-down the nicest physical release we’ve manifested in our nineteen-year history.” Read more details here; orders can be here.

The Joyce Foundation has announced this year’s winners of the Joyce Awards, which support creation of innovative works by pioneering artists of color across disciplines. (Alumni include Terence Blanchard, Nick Cave, Theaster Gates, Nari Ward and Camille A. Brown.) Following the award’s expansion from $50,000 to $75,000 in 2021, this year’s grants mark the largest total Joyce Awards granted to date, at $75,000 each. The two Chicago-area winners are Nancy García Loza and Aram Han Sifuentes. García Loza, paired with the National Museum of Mexican Art, will develop the play “Pénjamo: A Pocha Road Trip Story,” exploring bicultural identity and the myths and realities of ancestral homelands. García Loza will collaborate with NMMA to create public workshops engaging immigrant communities and communities of color in Chicago. The project will culminate in a live public workshop reading of “Pénjamo,” presented at NMMA. Aram Han Sifuentes, paired with the HANA Center will create “Citizenship for All: Storytelling for Immigrant Justice through NongGi Making,” “which will engage multiple generations of Asian and multiethnic communities in Albany Park through collective storytelling and artistic creation. Participants will learn to sew, embroider, and create protest banners modeled on traditional NongGis that integrate their own stories into the design. Through this exchange of personal stories, the completed banners will serve as a collective statement of community solidarity and pride.” More here.

“The Aurora Pride Parade on Sunday may be in jeopardy after Aurora police warned that organizers do not have enough officers to provide security at the event,” reports the Aurora Beacon News. “Officers have not stepped up to pick up overtime shifts to provide security at the event.” The Aurora Pride Parade Committee banned uniformed officers from marching. “As a result, Mayor Richard Irvin announced he would not participate in the parade and the city pulled its entry in the float lineup.”