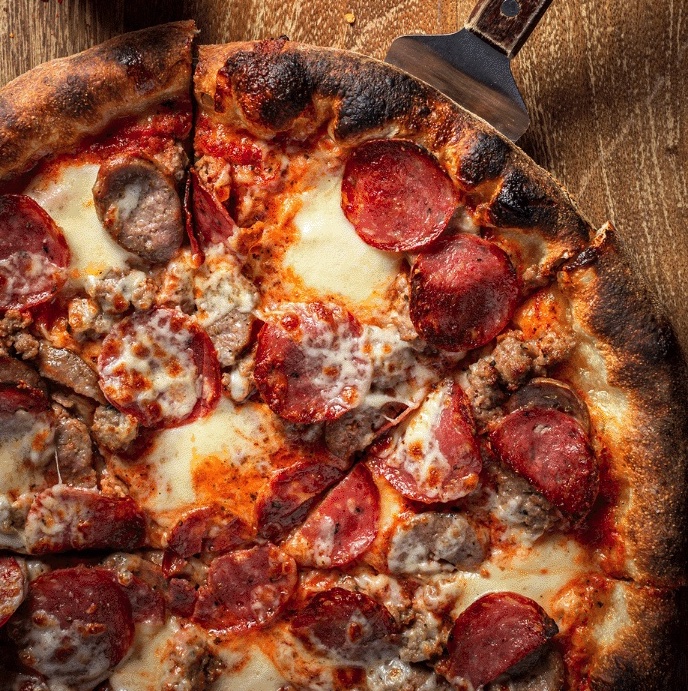 Robert’s Pizza and Dough Company, named among America’s finest pies, one of three from Chicago

“‘We anticipate, or hope, to replace our helicopters,’ Eric Carter, the first deputy police superintendent, said in an interview,” reports Frank Main at the Sun-Times. “Carter said ‘several philanthropists have stepped up and inquired what the needs were as well as the cost. It would be a phased transition if we are successful in acquiring the helicopters through philanthropists and donations—or government funds.’ He wouldn’t elaborate.”

“The River North Residents Association lost what little leverage it had when Mayor Lightfoot put her chips on Bally’s $1.7 billion River West bid and convinced the City Council less than three weeks later to authorize construction of a permanent casino at Chicago Avenue and Halsted and a temporary casino at Medinah Temple in River North,” writes Fran Spielman at the Sun-Times. On that group’s list: “Replace the outdoor music venue with a public park; Build an eastbound exit ramp and westbound entrance ramp connecting Bally’s River West casino directly to the Ohio-Ontario feeder to try to keep casino traffic off surface streets…; Devote two percent of annual city revenues from casino operations to ‘neighborhood-based gaming outreach and treatment’ for gambling addiction.”

Chicago Loop Alliance released its May report on downtown activity, using multiple sources to track operations as it has done monthly since July 2020. The report tracks COVID-19 positivity rates, pedestrian activity, parking volumes, hotel occupancy and number of office workers on-site. The data indicates that hotel occupancy has reached a record high, along with pedestrians edging closer to pre-pandemic levels, and office occupancy stabilizing. The full May report is here.

Ruth Rosas and John Greenfield at Streetsblog Chicago lay out the complicated form and figures of new Divvy pricing.

“Spotted on 290 from the Blue line!” Sperry Walker captured on Twitter the off-to-the-cleaners lion sculptures open to the hot, hot skies on a flatbed.

“Named after the Alice Walker poem, which begins ‘Be nobody’s darling; / Be an outcast,’ the namesake bar is a testament to its inspiration, a juxtaposition of tavern-like sensibility mixed with upscale décor. On any given night, queer tattooed women in their 20s, gay men in their 50s and trans women in their 70s,” writes Clayton Hauck for Punch, “can be found sitting at the burgundy bar under its Art Deco chandeliers. While the speakers blare 1980s pop music, the environment is still quiet enough to gather and make friends.” “I see a lot of people come in by themselves to sit at the bar, and by the second time they’re in here, they know at least three more people,” co-owner Angela Barnes tells Hauck.

“Illinois restaurants will have another layer of protection from predatory delivery apps starting January 1, 2023, when the Fair Food and Retail Delivery Act, signed into law by Governor Pritzker, goes into effect,” reports Eater Chicago. “The law prohibits third-party delivery apps from posting menus, logos or any other intellectual property of restaurants without their express written consent; if they do, restaurants can sue for damages of $5,000.”

“Innertown Pub is reopening, almost nine months after it was shut down by the city for a laundry list of building code violations,” reports Block Club Chicago. “Owner Denis Fogarty said the bar has undergone renovations while closed, including structural and electrical upgrades… ‘All the upgrades that we had to do were behind-the-scene things. So the Innertown experience will still be the same.’ … Fogarty called the reports about raw sewage ‘factually incorrect’ and said the bar never had any plumbing issues.”

In a recent presentation, Howard Schultz “made clear that he returned temporarily as Starbucks CEO, at least in part, to thwart union activity. Schultz told the New York Times’ Andrew Ross Sorkin that he doesn’t believe unions, which Schultz refers to as a ‘third party,’ should have a role at Starbucks; he argues that he is engaged in ‘a battle for the hearts and minds of our people.’ But Schultz may have taken things too far,” reports Judd Legum at Popular Information. “Federal labor law requires Starbucks, and every other company, to ‘bargain in good faith about wages, hours, and other terms and conditions of employment’ with a union. Workers United has already won union votes at [150 stores to date], and votes at dozens of additional stores are scheduled. Those pending votes create more potential problems for Schultz. Under federal law, employers must not ‘interfere with, restrain, or coerce employees’ considering whether to exercise their right to form a union. Employers can express their opposition to unionization but cannot ‘convey the message that selecting a union would be futile.'”

A ranking of pies worldwide places Spacca Napoli Pizzeria at sixth place in the U.S., with Forno Rosso at thirty-one and Robert’s Pizza and Dough Company at thirty-seven.

“A man once featured in a Peabody-award winning documentary series about at-risk youth in Chicago was shot to death last week on the West Side” reports WGN-TV. “Keontay Hightie, twenty-one, was on a porch in the 3800 block of West Maypole around 11:40am on June 8 when he was fatally shot during an argument… Hightie was featured in the Vice series ‘Last Chance High,’ which aired in 2014 and chronicled the lives of several students at Moses Montefiore Academy.” (Co-filmmaker Brent Renaud was killed by the Russian army near Kyiv while covering the war against Ukraine in March of this year. The series is here.)

“It’s wild to be the first Black editor… to be the first editor of color at all, it’s a wonderful honor and also points to the complicated legacy of this magazine,” Adrian Matejka tells Darcel Rockett in a profile at the Trib. “It’s such a central institution to the work that poets do and at the same time, for a long time, it was incredibly homogenistic… One of the things I decided we were going to do as a magazine is instead of trying to figure out how to rectify all the omissions and erasures that have happened over the long history of the 110 years of this magazine, we’re going to focus on figuring out how to highlight the people that should have been there to start with.”

Best-selling author and Bill Clinton co-writer, seventy-five-year-old James Patterson, takes to Facebook for his recent comments: “I apologize for saying white male writers having trouble finding work is a form of racism. I absolutely do not believe that racism is practiced against white writers. Please know that I strongly support a diversity of voices being heard—in literature, in Hollywood, everywhere.”

Incoming New York Times topper Joe Kahn, “a mild, Harvard-educated, Pulitzer Prize–winning newsman who rose up from the foreign reporting corps to the paper of record’s top management ranks,” talks to Vanity Fair’s Joe Pompeo about the state of media as he takes over one of the most criticized gigs in modern journalism. “I was concerned with… the tools that we have for creating these more robust digital packages, so that you can more intuitively guide readers through the full range of coverage that we have. You know, charts and data and explanatory pieces that help people get leveled up on the subject,” Kahn explains. “What I feel is the need to continue to deliver on genuinely making the Times a fully diverse workplace, including the leadership team, but also more thoroughly the workplace culture of The New York Times. Obviously the identity and background and experience and gender and race of the top editors is relevant. And it has continued to be relevant in this transition. So we want a top of the masthead that comes from a range of different journalistic experiences, and also comes from a range of different backgrounds in terms of race and ethnicity and gender. But I think it also needs to go deeper than that… [I]t’s time for people… to take a step back from an over-reliance on Twitter as a place to vet grievances with your own news organization.” Much more of the same at the link.

“Gloria Allen, most widely known as Mama Gloria, a Chicago transgender icon and activist who was the subject of an award-winning documentary and a critically-acclaimed play, died Monday in her Lakeview apartment… according to Luchina Fisher, director of a documentary about Allen’s life,” reports the Trib. “Fisher said Allen was a ‘legend’ in the community who transitioned before the Stonewall riots in 1969 and ‘the word transgender even existed.'”

The Paris Review’s Sophie Haigney profiles a Chicago TikTok star at the New York Times. “‘Are you a leftist who likes to have their tits out? Do you like to flick off pro-lifers?’ Chrissy Chlapecka asks the camera in a fifty-one-second TikTok captioned ‘BIMBOS, RISE !!’ … Ms. Chlapecka, a twenty-two-year-old comedian who lives in Chicago and has about 4.6 million TikTok followers, is wearing a tight pink minidress, a pink coat trimmed with faux fur and tall white leather boots; her bleach-blond hair is in pigtails. ‘Are you good at math?’ she asks, scribbling ‘2+2=<3’ into a notebook. She holds a pose while reading a book upside down. ‘Are you good at reading? Well if you are, how?’ At the end of the video, she yells out the window: ‘I’m a bimbo and I’m proud!’ … Ms. Chlapecka’s celebration of the much-maligned category of the ‘bimbo’ is provocative, even shocking… Ms. Chlapecka told me she identifies as feminist but that a lot of feminism needs to be ‘reworked.’ Like many women of her generation, her critiques include the historical whiteness of many strains of feminism, its heteronormativity and the persistence of anti-trans voices within the movement today.”

“The science is pretty clear that we’re in for more of this,” reports Axios. “One of the most high-confidence conclusions of climate science is that human-caused global warming is raising the odds of, as well as the severity and longevity of, extreme heat events. That likely includes this one,” says Andrew Freedman, Axios’ climate and energy reporter.