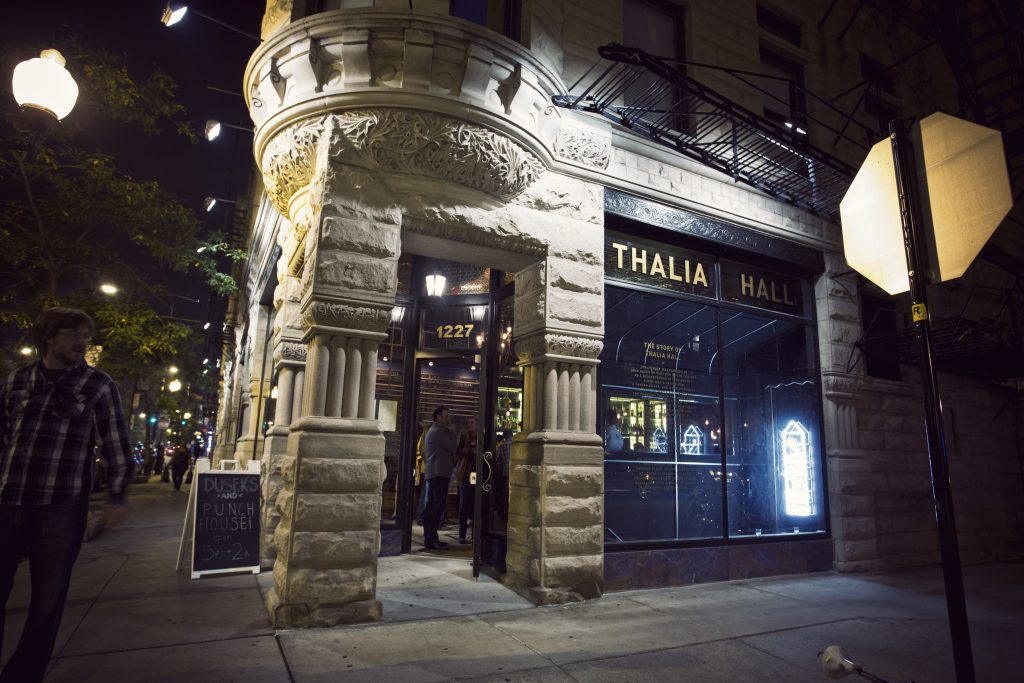 Steamroller Gets Into Art Biz In Lincoln Square

Is Chicago’s Office Tower Era Over?

“Chicago spent well over a century earning its reputation as a global skyscraper capital. From early feats of design like the Monadnock Building to renowned structures, such as Willis Tower, the former John Hancock Center and Aon Center, soaring office towers have defined the city’s identity for generations as a muscular hub of midcontinent commerce and pioneering architecture,” writes Danny Ecker at Crain’s. But “as businesses cut back on space, developers can’t get tall office towers off the ground.”

Crain’s Calls For Rethink Of Downtown

“Chicago needs to make big plans for the Loop,” writes the Chicago Business editorial board. “Two different building vacancy reports recently highlighted the head-scratching, halting progress of the downtown recovery and why Chicago needs a more aggressive plan to figure out a path forward for the city’s financial engine in a post-pandemic world… The downtown office vacancy rate—a telling data point that says a lot about the health of the central business district—at the end of June remained virtually unchanged from the record high set in first quarter at an unhealthy twenty-one percent. That’s up from nineteen percent in the same period last year and way up from the 13.8% at the outset of the pandemic more than two years ago… It will take a bold new vision to revitalize downtown.”

“‘Dragged through the garden’ is how Chicagoans lovingly refer to this salad-like outfitting,” writes Eric Kim at the New York Times. Kim mingles with the exotic locals: “The Chicago dog has a special place in the city’s heart: a humble, affordable food that anyone can enjoy, across cultures, creeds and proclivities. With French fries, it’s lunch; on its own, a snack. A source of civic pride, the Chicago-style hot dog is a nexus for many people’s relationship to a city they so adore… The ketchup issue is part of the lore of the Chicago dog, but it’s hard to tell for whom it’s a joke and for whom it’s a law. Many contend that ketchup on a Chicago-style hot dog is redundant, since relish and tomatoes already provide those sweet, vinegary flavors.”

“Jim’s Original, the iconic Chicago hot dog stand founded in 1939, perhaps best known for its Maxwell Street Polish sausage and bone-in pork chop sandwich, will open its first North Side location in the Avondale neighborhood this summer,” reports Louisa Chu at the Tribune. “The new location will also offer indoor seating with bar stools at stainless steel counters… the menu will be exactly the same, and he’s trying to make the inside look like the flagship stand on Union Avenue in University Village.”

“Netflix CEO Is Ready For TV To Die”

“Netflix wants linear TV to die,” writes Alex Cranz at the Verge. “CEO Reed Hastings has been banging the TV murder drum for more than eight years now, and in the investor call [earlier this week], he reiterated his belief, confidently saying that Netflix was in a great place because linear TV would be dead in ‘five to ten years.’ … One of the biggest competitors for the largest streaming service on the planet is the set of totally free streaming channels that beam into any TV with an antenna, and their costlier friends on cable TV. Netflix needs linear TV to die because it needs the streaming holdouts still using linear TV.”

“Comcast will invest $500,000 in Chicago’s YMCA facilities to help make the internet more accessible to residents,” reports the Sun-Times. “The company will, over three years, create tech hubs with computers and internet access that will be free for the public to use in six YMCAs in Irving Park, Humboldt Park, Lake View, Logan Square, Little Village and Woodlawn. The commitment is the largest Comcast has made to a community organization in Chicago.”

Smashing Pumpkins frontman Billy Corgan will host and perform in a livestreamed concert event July 27, reports the Trib. New to the lineup: Perry Farrell of Jane’s Addiction. Under the title, “Together and Together Again,” “the concert, put together with Corgan’s partner Chloé Mendel, will raise money for the Highland Park Community Foundation and its July 4th Highland Park Shooting Response Fund, and will take place at Madame ZuZu’s, the couple’s tea house and performance space in Highland Park.”

Augustana Lutheran Church and NON:op Open Opera Works present “Memoria de Memoria”: the premiere of a new composition by Christopher Preissing, featuring the Adrian Dunn Singers. “Keith Cooper, father and grandfather, Vietnam War Veteran, jazz lover, bowler, mentor, and friend of many, died after a carjacking in Hyde Park. Cooper was just one of 793 persons killed in Chicago by guns and senseless violence in 2021,” writes Preissing. “In honor of the first anniversary of Cooper’s death, Nancy Goede, parish pastor of Augustana Lutheran Church, where Cooper was a member, asked me to compose a work to honor and celebrate the humanity of Keith, as well as to remember others in Chicago who have been killed by gun violence.”  The event is Saturday, July 23 at 7pm at Augustana Lutheran Church of Hyde Park, 5500 South Woodlawn, and will be livestreamed here. More information here.

Talking To Women In Chicago Music

“Women have been at every historical turning point in hip-hop, rap, and all adjacent genres as they journeyed to the mainstream, yet many artists still find themselves counted out and outnumbered by men. Still, that hasn’t stopped women from continuing to make their mark in the music industry,” writes Chima Ikoro at South Side Weekly. “Among the endless list of talented women in Chicago are Jasmine Barber, Brittney Carter, Senite and King Marie. The Weekly sat down with these artists who are navigating this ever-evolving music scene to talk about their journeys, wins, and grievances, and how their identities shape their worlds and how the world sees them.”

“Nearly 1,000 people have signed onto a petition calling for city leaders to boot three large music festivals out of Douglass Park—including the Heatwave electronic music fest, which debuted last weekend,” reports Block Club Chicago. The petitions ask Alds. Monique Scott (24th) and George Cardenas (12th) “to stop allowing private companies to fence residents out of the park for massive festivals without a community input process that would allow neighbors to say no to events.”

A concise summary and an update on the unsettled fate of Victory Gardens is at American Theatre, including words from former artistic director Ken-Matt Martin. In a “statement this week, Martin writes that he has ‘decided that I need to take a break from nonprofit theatre administration and would not immediately return if asked.’ … Some glimmer of a possible future might be glimpsed in Martin’s statement, in which he called for the current board to relinquish their posts and make way for ‘an alternate board slate’ he said that Victory Gardens staff had been putting together, as well as raising ‘considerable funds in the form of pledges, all contingent on the current board’s resignation.’ Indeed, he said that the staff of Victory Gardens have been ‘building a transition plan with skilled facilitators and advisors volunteering their time.'”

The Roy Cockrum Foundation will support productions in the final slate of plays planned by outgoing artistic director, Robert Falls, the theater announces in a release, including “Swing State” by Rebecca Gilman and “The Cherry Orchard” by Anton Chekhov. By invitation only, The Roy Cockrum Foundation awards grants to support world-class performing arts projects in not-for-profit professional American theaters, enabling the theater to reach beyond its normal scope of activities and undertake ambitious productions. The Goodman was the proud recipient of The Roy Cockrum Foundation’s first grant—bestowed in 2016 to support “2666,” a stage adaptation of Chilean author Roberto Bolaño’s final novel, which Falls co-adapted and co-directed with Seth Bockley. (Falls ends his tenure as Goodman Theatre artistic director on August 31.)

“Robert Falls is a theatrical icon,” Roy Cockrum says in the release. “It took no effort whatsoever to persuade our board to support the celebration of Bob’s many decades building and sustaining Goodman Theatre’s status as a flagship of the American regional theater. We wish him all the best as his journey continues. We can’t wait to see what’s next.” Says Falls: “It feels appropriate to conclude this longtime chapter as Goodman Theatre artistic director with bold works by two of my unequivocal favorite writers; both of whom write about the messiness of the human psyche and human relationships, about small moments with big thematic ramifications. The Roy Cockrum Foundation, which is absolutely extraordinary in its understanding of the complex art of creating theater, makes it possible for artists to realize big dreams. I will always be grateful to Roy for the Foundation’s support of ‘2666,’ which remains one of the most meaningful productions of my career. To have his support now, at this singular professional and personal moment of my life, is incredibly moving.”

“Life After” Has Short Afterlife Online

The Chicago premiere production of “Life After,” by Britta Johnson, directed by Annie Tippe, is available to view in a limited online run on-demand. The production was recorded with multiple cameras and produced in collaboration with Christiana Tye Productions and Hatfield Post/Production. The high-quality video of the production is available through July 31. Tickets are available for $25 here.

Chicago-based United Airlines reports revenue of $12.1 billion in the three months ending in June, reports the New York Times, “its largest quarterly haul in at least a decade and the most it has ever earned in the second quarter of a year.” Costs held profit to $329 million.

“Cars could be impounded even if the owner was not involved in the drag-racing, ‘drifting’ or other stunts,” reports the Trib.

Clinics Not Prepared For Monkeypox

“Clinics that treat sexually transmitted diseases—already struggling to contain an explosive increase in infections such as syphilis and gonorrhea—find themselves on the front lines in the fight to control the rapidly growing monkeypox outbreak,” reports the Sun-Times. “After decades of underfunding and two and a half years into a pandemic that severely disrupted care, clinic staffers and public health officials say the clinics are ill-equipped for another epidemic.”

In its third-largest acquisition, behind Whole Foods and MGM, Amazon is buying One Medical for $3.9 billion, reports the New York Times. Amazon reached a deal to acquire the network of primary care clinics, “a big step in the e-commerce giant’s plans to become a player in the healthcare industry. One Medical, which is based in San Francisco, operates a network of primary care providers that offer in-office and virtual medical services, and is one of the leading competitors to a similar but smaller service Amazon had started to offer.” AP reports: “One Medical, whose parent company is the San-Francisco based 1Life Healthcare, Inc., is a membership-based service that offers virtual care as well as in-person visits. It also works with more than 8,000 companies to provide its health benefits to employees.”

Also announced: a few of the electric delivery trucks promised by Amazon hit the streets. “Nearly three years ago, Amazon announced that it would buy 100,000 custom-made delivery vehicles from Rivian, a fledgling maker of electric vehicles [located in downstate Illinois]… After some delays, the companies said hundreds of the vans were finally on the road. The battery-powered trucks are crucial to Rivian’s business plan and survival in a very competitive auto industry. And they are an important element of Amazon’s plan to limit carbon emissions as it builds its own fleet… But questions remain about how fast Rivian, about eighteen percent of which is owned by Amazon, can fulfill the retail giant’s order. The automaker, which began producing vehicles in small numbers last year, is struggling to ramp up while there are shortages of semiconductors and other components. And last week Rivian warned employees that they should expect layoffs and other cost-cutting measures.” Reports the Sun-Times: “The first wave of Amazon’s fleet of electric vans hit the streets Thursday in the Chicago area and more than a dozen other cities, the beginning of the e-commerce giant’s plan to move entirely green by 2040.”