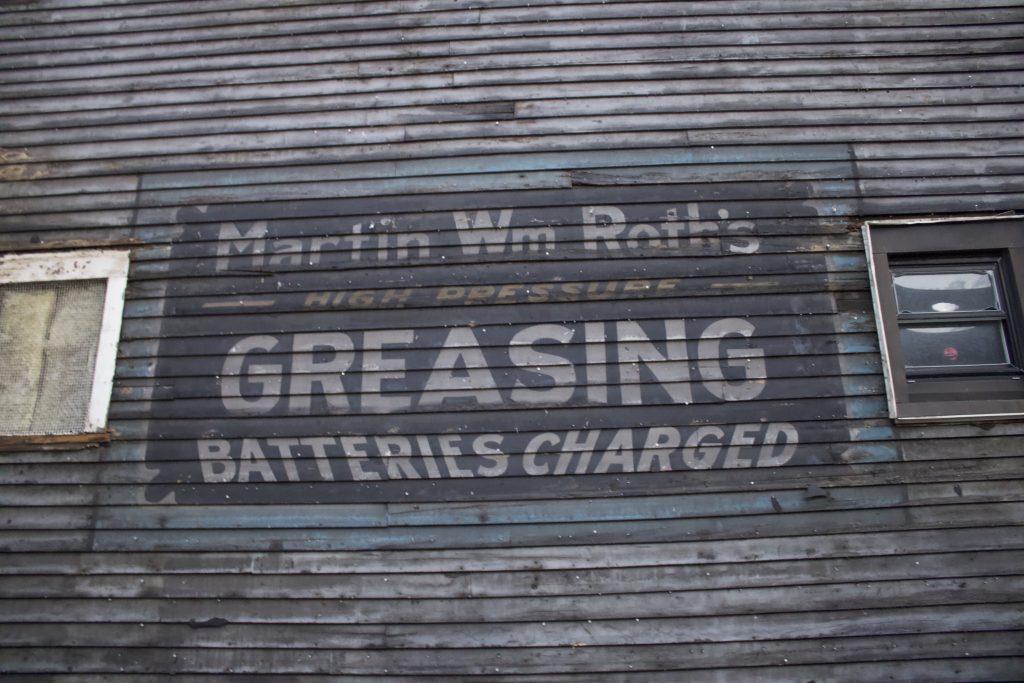 Nestled for decades behind plain siding (Google view here), a fistful of bold, painted signs on wood were discovered as the covering was removed in anticipation of demolition of a Lakeview building, now set for a couple of weeks from now. “A collective of Chicago sign painters hopes to raise $20,000 to safely remove and store the signs before the building they’re on is demolished in two weeks,” reports Block Club Chicago. “‘This is a once-in-a-lifetime piece. I don’t know if they’re ever gonna find another one like this in the city,’ [sign artist Bob] Behounek said. ‘This is like the Holy Grail for the outdoor advertising business here in Chicago.’ The siding on 3609 North Ravenswood, a two-flat from the 1890s, was taken down last month, revealing well-preserved walls of hand-painted advertisements for Shell Oil and Wonder Bread’s predecessor. But their future is at risk—and preservationists are scrambling to save them.” See the largest, brightest of the signs here (or in person). The “reveal” of a ghost sign during demolition of an adjoining building is an increasingly common event in Chicago, as the rate of demolition of older buildings accelerates, but this is the boldest in memory.

“Sterling Bay is set to begin construction of Chicago’s first mass timber building, a nine-story, apartment tower in Lincoln Park,” reports the Trib. The $50 million development at 2100 North Southport, just north of the company’s planned $6 billion Lincoln Yards and set to break ground just over 150 years after the Great Fire, could “kick off widespread use of the modern technique, already popular in other cities, which boosters claim is more environmentally friendly than concrete or steel and provides residents with a warmer ambience.”

Cycle Smithy To Close At End Of September

Owner Mark Mattei “hasn’t ruled out seeking a buyer for his location at 2468 ½ North Clark, which he’s been at since 1978,” reports Bicycle Retailer. His first Cycle Smithy location, opened in 1973 with the help of his father, was about 700 square feet. The current location, formerly Park West Schwinn where Mattei worked in 1972, is 4,000 square feet… “Being seventy-one and still having reasonable mental faculties, I thought it would be wise to retire when I could still consciously appreciate retiring.”

Governor Pritzker announced a long-awaited renovation of the popular Rend Lake Resort in Southern Illinois, which will begin in 2023 with an investment of more than $17.5 million. The funding will be used to renovate the conference center, restaurant, cabins, pool and “boatel,” which will enable the resort to host lodging guests, conferences and other visitors and events. “Rend Lake has been around for fifty years… a shining example of the rich history, the human ingenuity, and the values of sustainability that make Illinois special,” Pritzker says in a release. “We will be investing more than $17 million to renovate Rend Lake Resort—restoring the site to its former glory. With this funding, we are strengthening our tourism industry, our economy, our recreational offerings, and our holistic and social wellbeing all in one.”

The Rend Lake Resort is located at the 3,300-acre Wayne Fitzgerrell State Recreation Area and is operated by the Illinois Department of Natural Resources on the shore of Rend Lake in Franklin and Jefferson counties. The resort site features a hotel, conference center, cabins, restaurant, boatel, gift shop, pool, tennis courts and more. Opened in May 1991, the space was shuttered in 2016 after mold was discovered in the hotel and other buildings, requiring extensive remediation throughout the site. At the height of its operation, the Resort drew 2.4 million visitors annually and employed up to 125 staff members. It had an estimated economic impact of nearly $245 million in 2010, and occupancy rates were around ninety-percent during the high-season period between late spring and late fall.

The Joint Civic Committee of Italian Americans intends to return statues of Christopher Columbus that were removed by Mayor Lightfoot two years ago in Grant and Arrigo parks by Columbus Day of this year, which will be protected at city taxpayer expense, reports the Sun-Times. “President Ron Onesti said the plan — devised by a ‘national security firm’ at the committee’s expense—calls for various levels of protection,” adds Fran Spielman. “The security recommendations range from cameras, motion detectors and twenty-four-hour guards to ‘plexiglass encasement’ and ‘coatings’ on the statutes ‘so that clean-up is easier,’ Onesti said. Suggestions to protect the Grant Park monument include ‘barriers to keep the public farther away. There’s even a proposal to educate the public—by installing plaques to ‘tell the story of the Native American experience.'” The representative tells Spielman, “We really believe that one of the reasons this is all happening is because of misunderstandings and literal lies about the statues…”

Sancerre Hospitality has expanded their partnership with chef Joe Flamm, who will assume the role of culinary director, continuing to oversee all aspects of the Rose Mary kitchen while also taking over the culinary program at the West Loop BLVD Steakhouse, which opened in 2017. The group partnered with Flamm in 2021 to open Rose Mary, his debut restaurant inspired by Flamm’s Italian heritage and his wife’s Croatian roots. Flamm will oversee and evolve the menu at BLVD Steakhouse, focusing on simple, ingredient-driven cooking and classic techniques, just as he does at Rose Mary. “BLVD has been a great restaurant for the past five years,” Flamm says. “I’m looking to take things to the next level and see this place thrive for many years to come.”

DineAmic Hospitality, the group behind Prime & Provisions, Siena Tavern and Lyra, signed a longterm lease for space at 800 Fulton Market but has not disclosed details, reports Crain’s.

How Local Products Pitch To Get On Mariano’s Shelves

Axios bullet-points how local merchants sell themselves to Mariano’s. “Just because you have a great local product doesn’t mean Mariano’s will necessarily carry it right away. ‘We have to look at where they are with capacity and the process of production to make sure they can deliver the product… The pitch is not the end. If we select your product, it’s just the beginning.'”

Starbucks “exceeded sales expectations despite continuing store closures and reduced hours in China due to coronavirus measures,” reports AP via the Tribune of the megacorporation’s quarterly returns. “Strong U.S. demand made up for that. Same-store sales, or sales at stores open at least a year, rose nine-percent in the U.S., where customers are spending more on customizable cold beverages and food, like lime-frosted coconut bars. Morning traffic was also picking up as more people returned to offices… Starbucks’ revenue rose nine-percent to $8.2 billion, a quarterly record… More than 200 of Starbucks’ 9,000 company-owned U.S. stores have voted to unionize since last December, a move the company opposes. [CEO Howard] Schultz didn’t mention the union campaign.” Meanwhile, baristas at a fifth Chicago Starbucks location vote to unionize, at 6075 North Lincoln.

Chaz Ebert To Be Honored At Facets Screen Gems Benefit

FACETS’ 2022 Screen Gems Benefit will celebrate the life and career of RogerEbert.com publisher Chaz Ebert, Wednesday, September 28 at the Arts Club of Chicago. “Entrepreneur, publisher, author, producer and philanthropist Chaz Ebert has spent her career championing overlooked films and filmmakers, providing invaluable opportunities for new and diverse voices,” says Karen Cardarelli, executive director of FACETS. “Her work as a film producer, most recently in Rebecca Hall’s ‘Passing,’ has bolstered diversity and change in the film industry. And as president of the Roger and Chaz Ebert Foundation, Ms. Ebert’s stated passion is about programs that help break the glass ceiling for women and people of color and provide education and arts for women, children, and families. We applaud her efforts in the industry.” Tickets here.

“Nearing retirement age, when the company offered buyouts, I decided to accept, and I will write my last column for the Daily Herald this Sunday… headed down a new path,” writes longtime Daily Herald columnist Burt Constable.

The Chicago Latino Theater Alliance has announced that Myrna Salazar (Newcity Players 50), its co-founder and executive director, has passed away two weeks after celebrating her seventy-fifth birthday. “Salazar will always be a Chicago legend, leaving a legacy as a Latina trailblazer who shattered glass ceilings throughout her career. To her last day, Salazar advocated for equity and representation of Latino artists in mainstream media and Chicago’s live theater stages,” CLATA writes. “It is with profound sadness and shock that we share with you the sudden passing of our beloved Myrna Salazar,” Marty Castro, CLATA Board president says. “To say that Myrna was a force of nature would be an understatement. She has been a leader, advocate, change maker, and a strong voice for the Latino community on issues from education to the arts. She was and always will be part of our family and we mourn her loss. CLATA is part of her legacy and we will continue to work in her memory to ensure its continued success.”

Concern For The Physical Toll Of Theater

“The requirements of the theater, and the constant physical and emotional risks facing performers, have many demanding their basic needs as humans,” reports New York Times chief theater critic Jesse Green. “Disastrous tumbles and physical danger are so much a part of theater history that they’ve become treasured backstage lore instead of causes for concern…. In 1991 we all gossiped merrily when the tempestuous Nicol Williamson ignored his fight choreography in ‘I Hate Hamlet’ and struck his co-star Evan Handler with a sword… For much of the early 2010s, the mayhem of ‘Spider-Man: Turn Off the Dark’ was an endless source of schadenfreude… But concussions, broken ribs, a fractured skull, a crushed leg and an amputated foot—those are just the ‘Spider-Man’ injuries—aren’t actually funny. And they are only the most visible part of the story of harm endured by theater workers onstage and off. In return for the privilege of scraping by in a field they love, they are commonly expected to endanger themselves physically and emotionally.”

Sundays On State Expects More Than 100,000 This Weekend

Sundays on State expects to attract over 100,000 people to the Loop this Sunday. The full line-up, restrictions and registration is here.

Coming in the days after the federal government declared monkeypox a public health emergency, doctors and organizers of Chicago’s Market Days offer concern and advice, reports the Tribune. “Amid Market Days’ pulsing lights and booming music, something will stick out to people dancing at the street festival’s clubs and stages this weekend: banners, posters and looping videos telling them how to avoid monkeypox. As the LGBTQ-centered Northalsted Market Days street festival brings tens of thousands of people to Chicago, the spreading monkeypox virus will linger on minds. But before the party starts, doctors, health experts and festival organizers are sharing their concerns and advice on how to stay safe.”

The terms on the City’s deal with NASCAR “are not as generous as in a new ten-year extension with Lollapalooza,” reports the Sun-Times, “but the mayor said it ‘doesn’t make sense’ to compare the events, calling the music festival a ‘phenomenon unto itself.’ …The mayor acknowledged DuSable Lake Shore Drive would be ‘shut down for a certain period of time,’ but she argued it would be worth it to showcase Chicago to the world for a nationally televised, first-of-its-kind race… She noted the city recently wrapped up a ‘phenomenally successful’ [if] truncated Taste of Chicago that ‘shut down a part of the footprint but left the vast majority of Grant Park open… Obviously, there’s a buildup or takedown period for things like Lolla, for things like what will happen with NASCAR… but during those times, the footprint is open to visitors and people that want to enjoy the lakefront and Grant Park.’”

“An organization called Americans for Prosperity,” reports the Trib, “is spearheading the campaign for an ordinance that would bar the village [of Arlington Heights] from offering any type of financial incentive to ‘any business or corporation to operate in the village’… An ‘anti-corporate welfare ordinance,’ as the group refers to it, calls for not using taxpayer money in such ways and ‘declare an end to the economically destructive and corrupt policy.'”