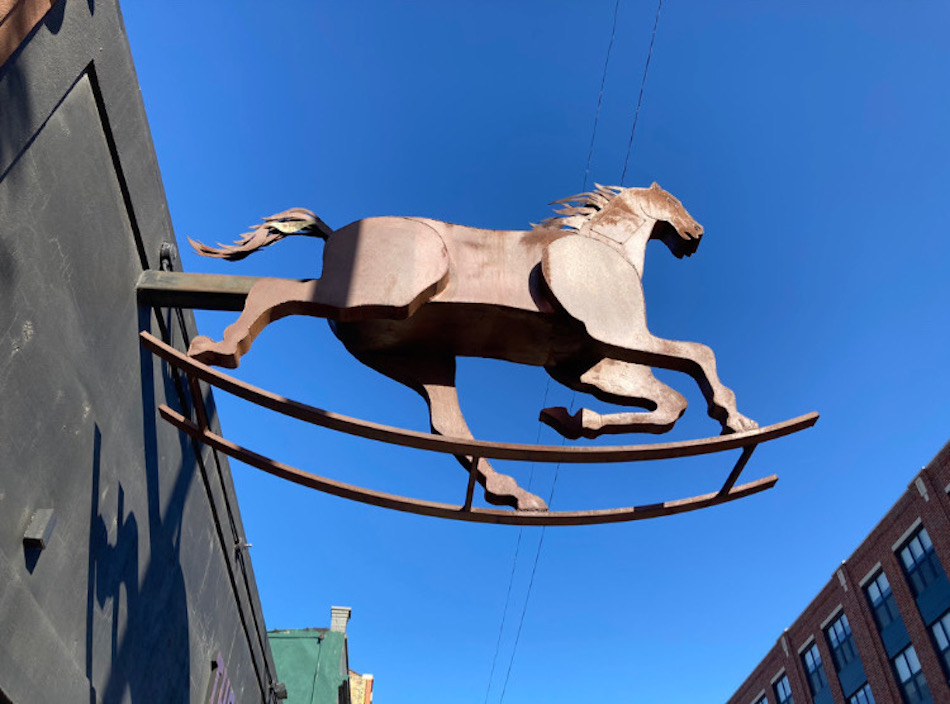 Sculptor Maya Lin is providing a fountain for the Obama Presidential Center, reports The Art Newspaper. The sculpture, “Seeing Through the Universe,” will be installed in the Ann Dunham Water Garden, which honors the former president’s mother. Says Obama in a statement, “I could picture [my mother] sitting on one of the benches on a nice summer afternoon, smiling and watching a bunch of kids running through the fountain, and I thought that would capture who she was as well as just about anything else.”

Beauty In Banality In Picturing The Lake

“Go down to the lake right now and you’ll see this phenomenon: Someone is there pointing their camera at nothing, at a wild expanse of lake that stretches into even more lake,” writes Christopher Borrelli at the Tribune. “I’m guessing they are struck by the beauty and immensity of the nature before them and assume the picture they are capturing will reflect the wonder they are feeling. I also guess they will eventually realize that their awe didn’t translate… I assume they will never look at that empty blue-on-blue-on-gray-on-blue image again… I had never connected people taking photos of the lake to long traditions of wellness and urban health. Victorian physicians would prescribe ‘sea air’ as just the thing for city dwellers nursing a host of ailments… You could also link Chicago’s Lake Michigan photographers to the important, even longer tradition of ‘pictures of nothing’—as a critic once called the impressionistic oceans of English painter J.M.W. Turner, whose indistinct colors blurring into smoky skies revolutionized the idea of landscape as a kind of mutable abstraction.”

CTA Tries To “Basically Address What Is, Quite Honestly, A Problem That Just About Every Major Company In The Country Is Facing”

CTA President Dorval Carter Jr’s “primary focus remains hiring more employees to solve the rampant shortage that has sidelined so many buses and trains,” reports the Sun-Times. “I’m really focused on how we increase our workforce and… find a way to get the number of employees that we need back at CTA so that we can provide the level of service that our customers are expecting of us,” Carter told WTTW’s Chicago Tonight. (Carter refused Sun-Times requests for an interview.) “We’re recruiting. We’re hiring. We’re offering… incentives. We’re doing all of the things that we can. And I’ll be announcing more of that… as we try to basically address what is, quite honestly, a problem that just about every major company in the country is facing right now.”

Air Conditioning As Life And Death

“As climate change brings hotter, longer and more frequent heatwaves, the health risks residents face are growing. Yet access to air conditioning at home, the simplest way to prevent heat illness and death, remains inequitable,” reports the Trib. “Nearly thirty states and U.S. territories and about a hundred Native American tribal grantees… provide a formal cooling program… The Biden administration has encouraged states to cover the purchase of energy-efficient air conditioners or heat pumps and to provide non-monetary aid in the form of ‘targeted outreach.’ ‘For households that lack air conditioning altogether, have inadequate equipment, or cannot afford the energy costs of running their units, extreme heat conditions can pose severe risks of health impacts,’ the Biden administration wrote in September 2021.”

“A New York City-based investor with a growing affordable housing portfolio snapped up another Chicago property, this time across the street from the future Obama Presidential Center in Jackson Park,” reports the Tribune. “Jonathan Rose Cos., in partnership with Preservation of Affordable Housing, paid $25 million for the 318-unit Jackson Park Terrace at 6040 South Harper.” The company “will preserve the building as affordable housing, and spend about $4 million on upgrades to its plumbing, electrical and mechanical systems, while Preservation of Affordable Housing creates new health services and youth programs.”

It turns out Rocking Horse on Milwaukee in Logan Square ended its decade-plus run with its pandemic closure, reports Block Club Chicago. The space is being built out for a new restaurant, and the iconic rocking horse sculpture signage is gone. Block Club compiles a spirited compare-and-contrast between landlord and restaurateur. (The owner of the building also owns the boarded-up Father And Son Restaurant site a little south on Milwaukee near Sacramento.)

Why Starbucks Baristas Are So Good At Union Organizing

Last week saw Chicago’s fifth Starbucks to unionize, in West Rogers Park. At The New Yorker, E. Tammy Kim reports on the larger scale: “Baristas nationwide are remarkably organized. Is the company’s CEO, Howard Schultz, using firings, store closures, and legal delays to thwart them?” Writes Kim, “At stores across western Washington and Oregon, I found unionizing workers to be highly disciplined. They used private group chats to mull strategy and teach one another about labor law, not only at their own stores but with others in the region. With the élan of wedding planners, they scheduled election-viewing parties (votes are counted over Zoom, by the National Labor Relations Board) and staged choreographed strikes. Their work as baristas made them adept at juggling tasks, making conversation, and responding to emotional cues—all essential for organizing. It was also the case that many leaders were queer or trans; Starbucks’s projection of lefty values had apparently attracted many LGBTQ activists. The organizers of one Seattle protest used the tagline ‘Be Gay! Do Strikes!’ Billie Adeosun, a barista in Olympia, Washington, quipped, ‘They fucked up when they hired a bunch of gay people. What do you expect when you hire a bunch of queers?'”

Mindy Segal has opened her “passion project” bakery in central Wicker Park, reports Block Club Chicago. “Since closing Hot Chocolate in 2020, Segal has hosted pop-up sales of her baked goods at her former restaurant and businesses around Wicker Park, which proved massively popular. After decades in the service industry, Segal said the bakery is an attempt to simplify her life and give her team of bakers a space to do what they do best… ‘I’ve always wanted a bakery since I was a little girl, and I’m a pastry chef by trade… I just want to bake at that table and say hi to people. I just want to bake, I don’t want to do anything else.'”

Keanu Reeves has been cast as architect Daniel Burnham in the Hulu adaptation of “Devil In The White City,” with Reeves, Stacey Sher, Leonardo DiCaprio and Martin Scorsese among the executive producers, records Variety. Todd Field (“In The Bedroom,” “Little Children”) directs. “It tells the true story of Daniel H. Burnham, a demanding but visionary architect who races to make his mark on history with the 1893 Chicago World’s Fair, and Dr. H. H. Holmes, America’s first modern serial killer and the man behind the notorious ‘Murder Castle’ built in the Fair’s shadow.” Comments author Erik Larson: “He’ll be terrific. I’ve always been a fan of Reeves, so double swoon on this end.”

What began as a fight over an LGBTQ-themed graphic novel may end with the closure of the Jamestown Township public library. “Residents voted to defund it,” reports Bridge Michigan. “Voters are upset about LGBT-themed graphic novels in the library; residents and library officials are now at a stalemate about what happens next. [The recent] vote guts the library’s operating budget in 2023—eighty-four percent of the library’s $245,000 budget comes from property taxes.”

“The notices were added to LGBTQ books, books about race and several literary classics, including Toni Morrison’s ‘Beloved,'” reports NBC News. “Collier County Public Schools, a district that includes part of Naples, added the labels both on physical copies of the books and in Destiny, the district’s online catalog, according to the nonprofit Florida Freedom to Read Project. ‘This Advisory Notice shall serve to inform you that this book has been identified by some community members as unsuitable for students. This book will also be identified in the Destiny system with the same notation. The decision as to whether this book is suitable or unsuitable shall be the decision of the parent(s) who has the right to oversee his/her child’s education consistent with state law.’” It’s “a compromise,” said Elizabeth Alves, associate superintendent of teaching and learning for Collier County Public Schools, with those who intend to ban books outright.

“Adam Levin left Chicago a few years ago and moved to Florida,” reports Christopher Borrelli at the Trib. “‘Mount Chicago,’ his new novel (592 pages), is yet another ambitious swing for the literary fences, or at the least, a rollicking yet mournful stab at returning the sprawling American novel to Chicago, home of Theodore Dreiser’s ‘Sister Carrie’ and Saul Bellow’s ‘Augie March’… Much of downtown Chicago collapses into an enormous sinkhole. Not funny, thousands die, but among the survivors are a celebrated comic, his biggest fan and the mayor of Chicago… There are run-ins with Richard M. Daley and Perry Farrell and Ari Emanuel, the Rainbo Club in Ukrainian Village and the UIC campus… And a writer named Adam Levin. It’s a ton of book, but also, a touching account of grief.”

“The board of directors of the Reader Institute for Community Journalism, publishers of the Chicago Reader, has announced that Tracy Baim is stepping down [after four years] as president and publisher at the end of 2022,” the Reader writes in a release. The board of directors “will hire a national firm to conduct a public search.” Says Baim, “As I enter my thirty-eighth year in community media I am excited to get back to writing and to uplifting the ecosystem of journalism overall.” Posts Baim on Twitter: “Here’s the scoop: I am going to be leaving as president and publisher of the Chicago Reader by the end of this year… I still want to help in an advisory role of some kind…” The Tribune: “Baim, fifty-nine, a veteran Chicago journalist who has helmed the Reader since 2018, navigated an arduous journey from money-losing publication to potentially solvent nonprofit, a process that was nearly derailed this year by an existential battle between its two owners, and allegations of censorship… Baim became publisher of the Reader under the new owners and created the nonprofit plan. She said the struggle to get the publication over the finish line took its toll and may have influenced her exit strategy. ‘I was definitely discombobulated,’ Baim said.” The Sun-Times: “Baim said she’s managed to more than double the Reader’s staff to thirty-eight people and that the free publication is now breaking even after losing about $1 million a year.”

Publishing conglomerate Gannett reported “a dismal second quarter financially … important revenue sources down, costs up and a loss of $54 million on revenues of $749 million,” records Poynter. A note to staff advised of layoffs to come, “eliminating some open positions and roles that will [affect] valued colleagues.” Gannett stock fell 28.5% in Friday morning trading. (Gannett has eleven papers in Illinois.)

Sam Gooden, one of the original members of Chicago soul group The Impressions as well as a member of the Rock & Roll Hall of Fame, has passed, reports the Sun-Times. “The Impressions formed in the 1950s after Gooden and brothers Richard and Arthur Brooks met Curtis Mayfield and Jerry Butler in Chicago… The Impressions remained a top group in the 1960s, known for their gospel-styled harmonies and socially conscious songs.”

“About a dozen residents gathered near the soccer field at Douglass Park for a community meeting about Riot Fest that left them with more questions than answers,” reports the Reader. “Residents complained that the meeting was poorly advertised, lacked structure, and ignored their concerns.” More here.

“A far Northwest suburb has agreed to allow a local bakery to continue holding events after backing off its threat to penalize the establishment in the wake of an onslaught of harassment leveled at the shop because of a planned kid-friendly drag show,” reports the Trib, “according to the American Civil Liberties Union of Illinois and suburban officials.”