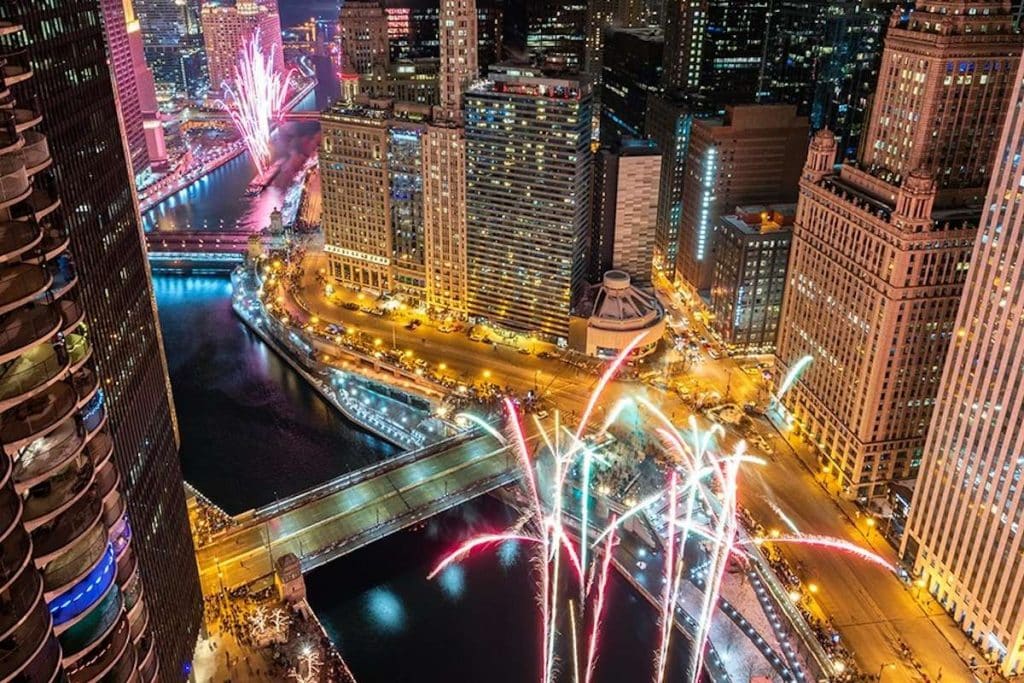 Navy Pier opens “Flow—Water Brings Life to Chicago” today, Barry Butler’s twenty-two-image celebration of picturesque views of Lake Michigan, the Chicago River and Buckingham Fountain, displaying water attractions around Chicago from the sky and the ground. “Barry Butler’s ability to see the extraordinary in everyday locations, combined with an unflinching talent for capturing the right moment with lightning-strike precision, has led him to be called ‘Chicago’s picture poet,’ and we’re thrilled to showcase his extraordinary photography here at Navy Pier,” Navy Pier president and CEO Marilynn Gardner says in a release. “It’s exciting to see the city you love through the eyes of an artist who shares that same passion for Chicago.” More here.

Governor Pritzker wants to sell off the Damen Silos at 2900 South Damen “along the South Branch of the Chicago River, a 23.4-acre property… familiar to drivers on the Stevenson Expressway for its towering old grain silos,” reports the Trib. Selling the site “will relieve the state of a financial burden, and a buyer could transform it into a data center, telecom facility, cannabis business or an industrial complex, giving surrounding neighborhoods an economic lift.” A 2014 sale fell through: “There were concerns about the cost of asbestos removal, the costs of demolition, the costs of building a sea wall and other environmental costs.” Lynn Becker wrote about the extended history of the landmark site in 2013: “Sometimes something can be so spectacularly useless that it endures. And in enduring, it begs to be re-invented.”

What’s The Future Of Downtown Indianapolis?

“Half-empty office towers. Boarded-up storefronts. An increase in crime. It’s no secret that downtown Indianapolis has a skyline-sized problem brought on by the pandemic,” records Indianapolis Monthly. “But a historic slate of development is underway that may return the city’s core to its Super Bowl–era glory. Here, a tour of what’s working, what’s not, and what remains to be seen.”

“Millions of Americans will be able to buy hearing aids without a prescription later this fall, under a long-awaited rule,” reports Associated Press. “The Food and Drug Administration said the new regulation cuts red tape by creating a new class of hearing aids that don’t require a medical exam, a prescription and other specialty evaluations. The devices will be sold online or over-the-counter at pharmacies and other retail stores. The FDA estimates that nearly thirty million adults could potentially benefit from hearing aids, but only about one-fifth of people with hearing problems use the devices currently.”

Pizzeria Uno And Due Buildings Sold

“The man who expanded Chicago’s deep-dish mainstay into a national chain has sold the River North buildings that house the original location and its sister spot, Pizzeria Due, back to the company for $2.3 million and $4.2 million. The CEO said they will remain unchanged,” reports Crain’s.

“Starbucks is asking the National Labor Relations Board to temporarily suspend all union elections at its U.S. stores after a career employee with the labor board told the company of alleged improper coordination between regional NLRB officials and the union,” reports the Sun-Times. “Starbucks said the employee informed the company about… issues in the NLRB’s St. Louis office while it was overseeing a union election at a Starbucks store in Overland Park, Kansas… The store is one of 314 U.S. Starbucks locations where workers have petitioned the NLRB… NLRB data shows 221 of those stores have voted to unionize and 46 have voted against, with other elections pending. The company opposes the unionization effort.” Responds Starbucks Workers United to “Starbucks’ accusation of NLRB misconduct and request to halt store votes: ‘Unfortunately, it’s now in vogue for the losers of some elections nationwide to attempt to reverse elections by any means they think are necessary.'”

Lincoln Square Gets A Public House

The Green Post is scheduled to open next month in Lincoln Square in the Red Lion location on Rockwell Avenue, a new venture by the team behind The Northman, Fountainhead and Bar on Buena. “The Green Post  is a testament to the century’s old traditions and evolution of the Public House,” the group writes. “Our aspiration is to offer guests a home outside of theirs; a place to meet with friends, host a meeting, read a book, play a game, work remotely or watch a match. Open at 7am daily and throughout the evening, guests are invited to explore the distinct, historical architecture of our three rooms and two garden spaces. Whether enjoying a cappuccino, tea, beer or bespoke gin cocktail, patrons will find our beverage team has them in mind. Kitchen offerings change throughout the day, inspired by the flavors abundant in the North Atlantic Isles and anchored by our passion for savory meat and veg pies.  Slated to open early September, the cafe will launch first from 7am-2pm, Monday-Friday, focusing on barista-driven hot and cold beverages and other morning favorites, breakfast pies and pastries.” Job openings here.

“The summer movie season is wrapping up with several blockbusters. Studio executives are signaling a commitment to the big screen. And the ravaged landscape of closed theater chains that many predicted two years ago hasn’t come to fruition,” reports the Wall Street Journal. “Studio chiefs are indicating to shareholders that they want to emphasize theatrical releases now that audiences are leaving the house, especially as streaming growth in the U.S. stalls… The question is whether momentum will last for movies amid a looming movie shortage and inflation pressures on consumers.”

“Employees at the Newberry Library are working to form a union with the American Federation of State, County and Municipal Employees, which is fresh from successfully organizing staff at the Art Institute of Chicago and its school,” reports the Sun-Times. “Spokesman Anders Lindall of AFSCME’s Council 31 said it is seeking to organize sixty-six workers. The bargaining unit could include conservators, librarians, library assistants, program coordinators and other staff positions.”

WBEZ reports the two alderpersons representing Douglass Park have benefited from promoter contributions: “Since 2016, the promoters behind the Riot Fest, Summer Smash and Heatwave music festivals, collectively, have donated at least $44,650 to [George] Cardenas, the 12th Ward alderman. From 2017 to 2021, [Michael] Scott, the former 24th Ward alderman, received at least $17,500 in campaign contributions from the promoters of two festivals, though most of it came from Summer Smash promoters… He stepped down from his post in 2022. Mayor Lightfoot appointed Scott’s sister, Monique, to finish the term.” Block Club Chicago reports that the park won’t be cleaned up until fall: “The southern half of Douglass Park has been damaged by large crowds and heavy equipment brought in for a series of massive music festivals. The fields have been trampled, leaving the grass dead and soil compacted. Portions of the grass turf have been torn up by stage equipment and vehicles, with tire marks left in the ground. Trash is strewn across the grounds, and broken glass bottles remain scattered across the athletic field and landscaping. Despite the pleas of hundreds of Lawndale and Little Village residents, Douglass Park will remain in this state until after the summer ends.”

Shuga Records has taken a twenty-year-lease on a commercial building on a changing stretch of Armitage Avenue, reports Block Club Chicago, “serving as a retail shop and the company’s warehouse… The original Shuga Records store at 1272 North Milwaukee will remain open… Boxed vinyl records are heavy, and moving hundreds of thousands of them is a serious undertaking, [owner Adam] Rosen said. He said he also struggled to find a landlord willing to grant him a long lease… ‘I can’t just move half-a-million records somewhere, and in five years, you see I’m doing good, and you say, “Oh, I’m raising your rent.”‘”

The Chicago Symphony Orchestra (CSO) will release “Cavalleria rusticana,” the eleventh recording with music director Riccardo Muti on its CSO Resound label for digital download and streaming through platforms including Apple Music, Amazon Music and Spotify, as well as the symphony’s store on September 16. The CD will be available at retailers worldwide in late 2022. More here.

National Endowment For Humanities Announces $31.5 Million In Grants To 226 Projects

Nearly $32 million in grants are going to 226 projects nationwide, announces the National Endowment For the Humanities in its third round for 2022. Illinois received ten grants, for just over a million dollars total. The grants include, in Champaign, the University of Illinois for the National Digital Newspaper Program receives $299,977 for the digitization of 100,000 pages of historical Illinois newspapers with a focus on suburban areas and southern regions of the state; in Chicago, the Center for Research Libraries receives $49,698 for “Legal Legacies for Cross-Border Text Data Mining Project,” a series of roundtables and the development of case studies on ethical and legal issues for U.S.-based humanities researchers around data mining of large-scale textual collections held outside of the United States; for the Chicago Historical Society, $215,000 for “Rethinking the Gilded Age and Progressivisms: Race, Capitalism, Democracy 1870–1920,” a three-week residential institute for thirty K–12 educators on the history and culture of the Gilded Age and Progressive Era in Chicago; Chicago Theological Seminary, $10,000  for “General Preservation Assessment, Training, and Preservation Supplies Project,” a general preservation assessment, training for staff in collections care, and preservation supplies to protect archival materials documenting the history of the Chicago Theological Seminary from 1855 to the present; Experimental Sound Studio, $10,000 for “Creative Audio Archive: Preservation Assessment & Planning Project,”  a preservation assessment of Experimental Sound Studio’s Creative Audio Archive, a collection of audiovisual recordings chronicling experimental music and spoken-word live performances mostly from Chicago and the Midwest dating from the 1950s to the early 2000s; Glessner House Museum, $10,000 for “Reorganization and Expansion of Collections Storage Project,” the purchase of fifteen shelving units and preservation supplies to protect the collections at Glessner House Museum, home to John J. Glessner (1843-1936), designed by architect Henry Hobson Richardson in 1887; University of Chicago, $251,257 for “The Works of Giuseppe Verdi Project,” in preparation for print publication of a critical edition and score of “Le trouvère, Un ballo in Maschera, Juvenilia,” and “Lombardi alla prima Crociata” by Verdi and to continue work on four other Verdi operas: “Falstaff,” “Otello,” “Romanze,” and “Les vêpres siciliennes”; in Eureka, for Eureka College: $8,610 for “Purchase of Environmental Monitoring Supplies and HVAC Assessment for the Ronald Reagan Museum Project.” The full list is here.

Slow & Low: Chicago Lowrider Festival returns on Saturday, October 15 at Navy Pier, the event organizers post on Facebook. “This year’s return follows our pre-pandemic festival in September 2018, taking over four city blocks in Pilsen, exhibiting more than 350 customized cars, dozens of bicycles, and motorcycles while welcoming more than 15,000 guests. Slow & Low has grown into a community-wide celebration of Lowrider heritage and identity. Unlike a competitive car show, Slow & Low is a curated exhibition that explores and presents Lowrider culture as an original form of American folk and contemporary art. This fall, during Hispanic Heritage Month, Slow & Low: Chicago Lowrider Festival will take over 170,000 square feet of exhibition space in Navy Pier’s Festival Hall as the largest gathering celebrating Lowrider culture, community, and art in Chicago.”

“Twenty-six current and former employees of a Joliet Amazon warehouse accused the company of allowing a racially hostile work environment. They’ve since been joined by a dozen more workers, who’ve filed charges with the Equal Employment Opportunity Commission that outline racist death threats against Black employees – and some of those employees also say they’ve faced retaliation from Amazon since speaking out,” reports WTTW. Meanwhile, Amazon claims the Federal Trade Commission is “harassing” founder Jeff Bezos and the top executives “as part of a probe into the e-commerce group’s Prime membership scheme… Amazon said the investigation had become ‘unduly burdensome’ on employees and executives after at least nineteen were served individual subpoenas—or Civil Investigative Demands—to give evidence.”