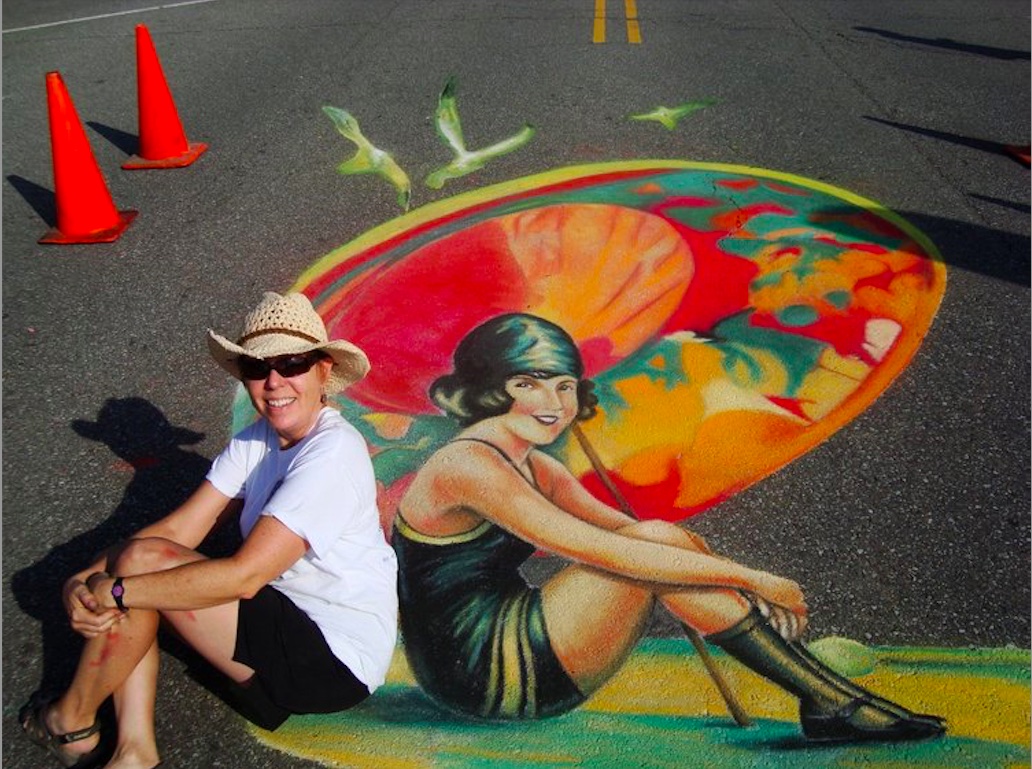 Chalk Howard Street Is Back

“Metra will convert at least three of its 173 locomotives to battery power, with the option to convert up to three more, under a plan approved by the Metra board,” reports the Trib. Here’s the Metra press release: “This procurement puts Metra on the cutting edge of battery-powered technology and demonstrates our commitment to innovation and cleaner energy,” says Metra CEO-executive director Jim Derwinski. “If these locomotives prove themselves, they could play a significant role in our fleet and in our future, and the concept could serve as a template for other railroads to follow.” “The total cost for all six locomotive conversions, which will be performed in Patterson, Georgia, is $34.6 million. Completing the base order is expected to take about three-and-a-half years. Metra plans to test the battery-powered locomotives, which will have an estimated range of about 150 miles, on the Rock Island Line. Charging stations, which will be designed after the locomotives are designed, will be placed in the main yard and at an outlying point. The duration of a full and partial recharge of the batteries won’t be known until then.”

“En Passant, the restaurant from Au Cheval opening chef Sam Engelhardt … in Logan Square, looks permanently closed after slightly more than a year… The critically acclaimed restaurant opened in April 2021 after multiple delays, as Engelhardt ushered patrons inside his quaintly rustic 1,600-square-foot dining room near the corner of Diversey and Sacramento… Its decor included a smattering of European clocks, with one set to run backward: for the chef, it symbolized a timeless and lived-in atmosphere,” reports Eater Chicago.

“Four staffers at Wicker Park’s Milk & Honey Café walked off the job last week, saying new leaders cut into their tips, created a toxic work environment and did not care for the café like its original owner,” reports Block Club Chicago. “Former employees said the problems stretch back to September, when the cafe’s founder, Carol Watson, sold the business to Brad Cimaglio’s Vitality Holdings, which also operates three Black Coffee and Waffle Bar shops and a bar in Minnesota… Another issue: The tip-out policy was changed by the previous manager shortly before she left, former employees and Cimaglio said. Tips were pooled weekly instead of daily, leading to reduced wages for those who typically worked busier shifts, former employees said.”

“Logan Square debuted the first of its weekly food truck socials at a new plaza, one designated for food trucks. The area, along the CTA’s Blue Line tracks, behind the Target on the 2400 block of Sacramento Avenue, allows trucks to gather without being concerned about parking tickets or being yelled at to move,” reports Eater Chicago. “Giving Logan Square an accessible place to gather was paramount and for the inaugural Saturday, July 30, Logan Square Chamber executive director Nilda Esparza says the social drew a total of 7,000.”

“In 2023, ‘at least the majority—if not the vast majority’ of new Portillo’s locations will be in Texas, Florida and Arizona,” reports Crain’s.

“Starbucks has shown itself to be anything but progressive and humane in the punitive and harsh way it has responded to a historic unionization campaign,” writes Steven Greenhouse in a lengthy report at The American Prospect. “From the earliest days of the campaign, Starbucks has taken a fierce approach toward stifling the union. With each passing month, many baristas say, Starbucks has been playing dirtier and dirtier as it searches for ever more effective anti-union tactics. To many baristas, Starbucks has been sending a clear anti-union message: If you dare seek to unionize, bad things could suddenly happen to you—you could get fired, your hours and benefits could get cut, your store could close, you might not get the raise that other baristas will receive.”

“Workers say they were just days from going public with their union campaign when Trader Joe’s shuttered the Union Square wine shop” in Manhattan, reports Huffington Post. The workers at Trader Joe’s Wine Shop in Manhattan “spent the last four months laying the groundwork to unionize their store. A small organizing committee met regularly to discuss strategy around building support to join the United Food and Commercial Workers union, and they planned to go public with their effort the week of August 15. But in the early morning hours of August 11, Trader Joe’s abruptly informed them it was closing the popular wine shop, its only one in New York City.” Adds New York’s Hell Gate: “For now, Trader Joe’s has offered to help workers find ‘opportunities’ at other stores. Labor law allows an owner to shut down their business if their employees unionize, but they are supposed to shut down the entire operation (just ask DNAinfo Chicago about all that). Is what Trader Joe’s did legal? Even if it’s not, these cases usually take months if not years to go through the NLRB process before any penalties can be levied.”

The Flavors Of The 2022 Hoosier “Taste Of The Fair”

“In one Virginia school district this fall, parents will receive an email notification every time their child checks out a book. In a Florida school system, teachers are purging their classrooms of texts that mention racism, sexism, gender identity or oppression. And a Pennsylvania school district is convening a panel of adults to sign off on every title that school librarians propose buying,” reports the Washington Post. “In the past two years, six states have passed laws that mandate parental involvement in reviewing books, making it easier for parents to remove books or restrict the texts available at school… Five states are considering similar legislation… One Nebraska system will require that parents sign permission slips for library books. A Texas system will divide its library into ‘juvenile,’ ‘young adult’ and ‘adult’ sections, with parents choosing the ‘level’ their child can access.” Meanwhile, the school board in Kettle Moraine, Wisconsin, voted to ban the pride flag: “Staff also may not say in emails what their preferred pronouns are.”

Are People In Their Thirties Giving Up On Music?

“For the last few years, I have felt the inescapable disappearance of music from my friends’ lives. Even people with whom I have longstanding relationships that were born from a shared love of music have simply let it go, or let it fade deep into the background. A 2015 study of people’s listening habits on Spotify found that most people stop listening to new music at thirty-three; a 2018 report by Deezer had it at thirty. In my twenties, the idea that people’s appetite to consume new music regularly would be switched off like some kind of tap was ludicrous. However, now I’m thirty-six, it’s difficult to argue with,” writes Daniel Dylan Wray in the Guardian. “It’s a strange and alienating experience to have a fundamental part of your relationship with someone deteriorate. The shift is a subtle one; a sudden realisation that hits as the once regular conversation of ‘What are you listening to?’ is seemingly replaced permanently by ‘What are you watching?’ I’ve lost count of the amount of free plus one tickets I’ve had go unaccounted for; the seat next to me becoming a coat stand. I’ve not been able to give away free tickets to see Nick Cave, staggeringly expensive arena pop shows, or even entire festival weekend passes.”

Is The Workplace Of The Musical “The Devil Wears Prada” Less Toxic Than The Movie’s?

“Producers of a Broadway-bound musical ‘Prada’ promised to present ‘an updated version of the much-loved tale… to reflect the cultural and societal changes that have [since] redefined the fashion world.’ Though the world-premiere run in Chicago doesn’t deal with the industry’s strides toward racial inclusion or body diversity, it does wrestle with our world’s evolving attitudes toward workplaces,” writes Ashley Lee at the Los Angeles Times. “Amid the death of the ‘girl boss’ and the ongoing Great Resignation, the musical’s portrayal of the changing attitudes people have toward their jobs [is] right on trend. A toxic commitment to the office, previously glamorized onscreen and standardized across society, is explicitly denounced in its 2022 setting.”

Cleveland Fed Reports There Would Be Advantages To Universal Basic Income

“New research focuses on means-tested transfers, asset limits, and universal basic income,” reports the Cleveland Federal Reserve. in a newly released paper. “Asset limits in means-tested transfers can allow for the distribution of scarce aid to families most in need but may offer a disincentive to beneficiaries to build savings necessary to weather economic shocks… We examine the net worth of transfer recipients along the income distribution and review the economic literature on the matter with a discussion of universal basic income (UBI) as a policy alternative… We document that recipients have a smaller average net worth than non-recipients at every quintile of the income distribution. We also find that participants at the very bottom of the income distribution are in asset poverty, with an average level of assets surrounding testing thresholds. Recent research suggests that the elimination of testing limits, such as in policies similar to a UBI, could present a welfare-improving alternative to the current system, though not without large economic trade-offs.”