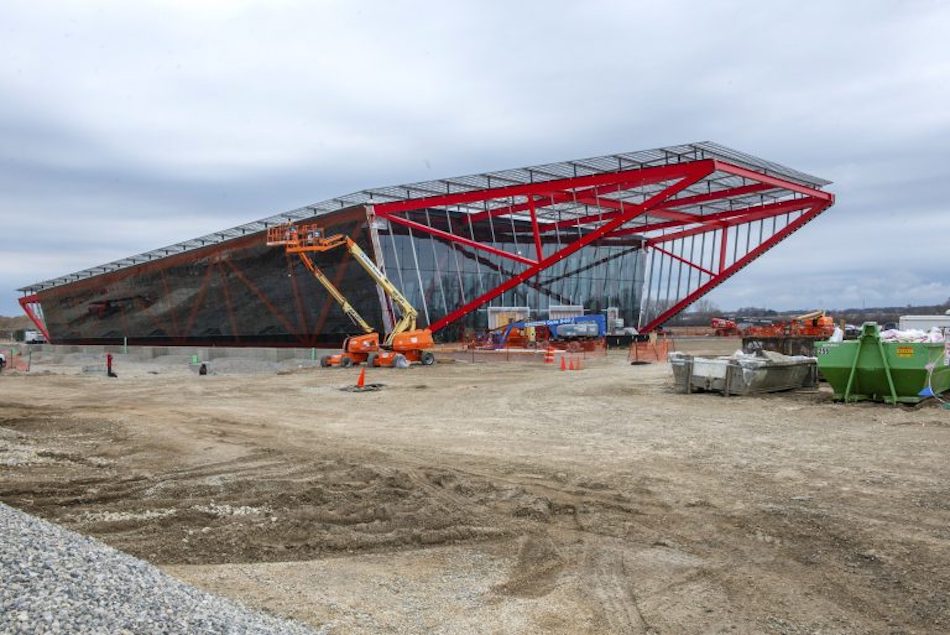 Final Jahn Design, In The Shape Of A Tank, Is In Milwaukee

Helmut Jahn “was tapped by the Pritzker Military Museum & Library to design a new storage facility in 2018. Pritzker’s Chicago home was running out of room for its collection of over 100,000 military artifacts and was looking to an open site northwest of Kenosha to expand,” reports Milwaukee magazine. “‘When we first contacted Jahn, we explained the mission and he was very interested,’ says Roberto Bravo, the museum’s senior director. ‘He wanted to make the building resemble a tank, but to make it so aesthetically pleasing that it wasn’t obvious.'”

“Construction is now fully underway for 150 East Ontario, the site of what will be a twenty-eight-story hotel,” reports YIMBY Chicago. “The Streeterville project is one of the first major high-rises in years to be built in the district, whose development heyday occupied much of the 2000s and 2010s.”

Groundbreaking For Housing For Visually Impaired

A groundbreaking this week “marks the ceremonial beginning of constructing The Foglia Residences at The Chicago Lighthouse. The nine-story, seventy-six-unit building at the corner of Wood and Roosevelt will include studio, one-bedroom, and two-bedroom apartments for independent living,” reports WGN-TV. “There will be an emphasis on providing for residents who are blind, visually impaired, disabled or veterans. Features like high-contrast wall-tiles, varied floor textures to indicate room transitions, built-in voice controls and Braille signage have been incorporated into the building’s design.”

“Bronzeville probably would look very different today if it weren’t for the passion of Harold Lucas,” writes Maureen O’Donnell at the Sun-Times. The seventy-nine-year-old Lucas, “the son of a Pullman porter and grandson of a renowned chef who brought tastes of the world to the family table, knew all about Bronzeville’s glory days and never stopped educating people about them. Other activists and community leaders say his outspoken advocacy contributed to the preservation of some of the most historic buildings in the South Side neighborhood once known as the Black Metropolis.”

“You can now score a slice of the rich, chocolatey cake at Loaf Lounge,” reports Eater Chicago. “While the owners prepared to open, co-owner and ace baker Sarah Mispagel served as a consultant for ‘The Bear’… Mispagel created the sweets depicted on screen and allowed actor Lionel Boyce, who plays Marcus, to apply a final touch. Mispagel’s work included a scrumptious chocolate cake that made viewers take note. A hulking slice of that cake is now available at Loaf Lounge for $7.50. How does the cake taste?”

“The Gold Coast staple owned by Phil Stefani announced it’s shutting down permanently when its lease expires,” reports Crain’s. New Year’s Eve is the last night of service, reports Channel 7. “Tavern on Rush has been an icon since it opened in April 1998, with some of the original staff still working there,” adds Block Club. “The restaurant became a hot spot for local celebrities, with the Blackhawks bringing the Stanley Cup there… Every Monday, the restaurant raffles a pair of Christian Louboutin heels. The heels, displayed in a glass box behind the bar, attracts droves of women and men.” Eater Chicago: “Stefani credits his staff—he has about seventy-five who work at the restaurant—for ensuring that celebrities would return. Having a strong team is something Stefani feels extends to his other venues, including past hits like Lino’s on Ontario, Tuscany, and the original Stefani’s on Fullerton in Lincoln Park.”

Oscar Mayer is introducing Cold Dogs, “an idea that stemmed from the company’s Stupid or Genius campaign,” reports WGN-TV. “The company has teamed up with Popbar, a brand of premium frozen desserts, to make the Cold Dog, which is described as having ‘both refreshing and smokey umami notes of Oscar Mayer’s iconic wiener’ and is topped with a swirl of mustard.”

“Starbucks illegally withheld wages and benefits from thousands of unionized baristas, the National Labor Relations Board alleged,” reports the Washington Post. “The complaint arrives during a campaign by the coffee chain and its interim CEO, Howard Schultz, to tamp down unionization efforts at its stores around the United States. More than 230 locations have voted to join the Starbucks Workers United union since late 2021, driving a surge in unionization nationwide. The NLRB seeks back payments and benefits for unionized workers since May and to require Schultz to read a statement to workers about their union rights.”

“The Cinema Foundation, a non-profit arm of the National Association of Theater Owners, on Sunday announced that September 3 will be a nationwide discount day in more than 3,000 theaters and on more than 30,000 screens,” reports AP (via NPR). “Major chains, including AMC and Regal Cinemas, are participating, as are all major film studios. In participating theaters, tickets will be no more than $3 for every showing, in every format. Labor Day weekend is traditionally one of the slowest weekends in theaters.”

Graphic novelist Nick Drnaso talks to Chicago magazine about his third book and perspective. “I just went to the UK and I was thinking as I was walking around and looking at the winding hilly roads and the alleys and things that I wouldn’t really know how to interpret that into a comic if I had to. The perspective is very obvious in a grid kind of place like Chicago. The houses are all mostly in a line and you can follow the perspectives as you’re walking around the streets, and that led into the way that I depict things.”

“Administrators at a Nebraska school shuttered the school’s award-winning student newspaper just days after its last edition that included articles and editorials on LGBTQ issues, leading press freedom advocates to call the move an act of censorship,” reports Associated Press. “The paper’s demise also came a month after its staff was reprimanded for publishing students’ preferred pronouns and names. District officials told students they could only use names assigned at birth going forward.” The Grand Island Independent: “While working on the school year-ending issue of the Saga newspaper, staffers had little idea its student-written content would mark a fifty-four-year-old publication’s abrupt end… ‘The very last issue that came out this year, there was… a little bit of hostility amongst some,’ the school board member said. ‘There were editorials that were essentially, I guess what I would say, LGBTQ.'”

Last Journalists Laid Off At Some Gannett Properties

“They were some of the last journalists at their papers. Then came the layoffs,” reports the Washington Post. “The latest cutbacks at Gannett come amid an industry-wide trend of shrinking newspaper newsrooms… The only full-time news reporter at the Daily Jeffersonian kept busy until recently. Kristi Garabrandt drove around Guernsey County, Ohio, for three years covering local council meetings and Eagle Scouts, photographing community events and writing a series on drug addiction. The Daily Jeff, as it’s called locally, has been around since 1824… Then came the layoffs… Garabrandt became one of at least dozens of Gannett employees who lost their jobs. It took her off-guard. ‘When you’re the paper’s only reporter, you don’t consider yourself nonessential.'”

All In Comedy Showcases Comedians With Disabilities

“The very phrase ‘stand-up comedy’ is arguably ableist,” writes Kerry Reid at the Reader, “even though there are many working comedians who use wheelchairs or who have other disabilities, comedy clubs (like a lot of entertainment venues) still have a ways to go to address issues of accessibility for patrons and performers alike. But Nicholas Dunnigan is hoping to change that… Dunnigan started out just a few months ago as an intern at Chicago’s Laugh Factory… He began thinking about not just having ASL interpreters…but creating a more welcoming environment for audiences and performers who have disabilities.” The result is “All In Comedy,” a disability-inclusive show scheduled for Sunday, October 23. “The lineup will be comprised entirely of comedians with disabilities… and there will be ASL interpreters, large-print menus for guests with visual impairments, and dimmed lighting for patrons with sensory sensitivity.”

“Sun-Times reporter Manny Ramos and photographer Ashlee Rezin spent several weekends at these meets, which have long drawn complaints about the noise and the disruption and the danger,” reports the Sun-Times. “They are often organized in minutes through a social network that taps into the culture of street racing. Many times, people leaving a meet broken up by police will drive around until getting the coordinates of another meet that same night. And despite a recent crackdown that could cost participants their cars, there is no shortage of drivers or spectators.”

“A first-of-its-kind report on the conservation status of all 881 native tree species in the contiguous U.S. highlights [finds] that at least one in nine species are threatened with extinction,” reports the Tribune. “American elms and ash trees are among the ten tree species under threat in Illinois.”