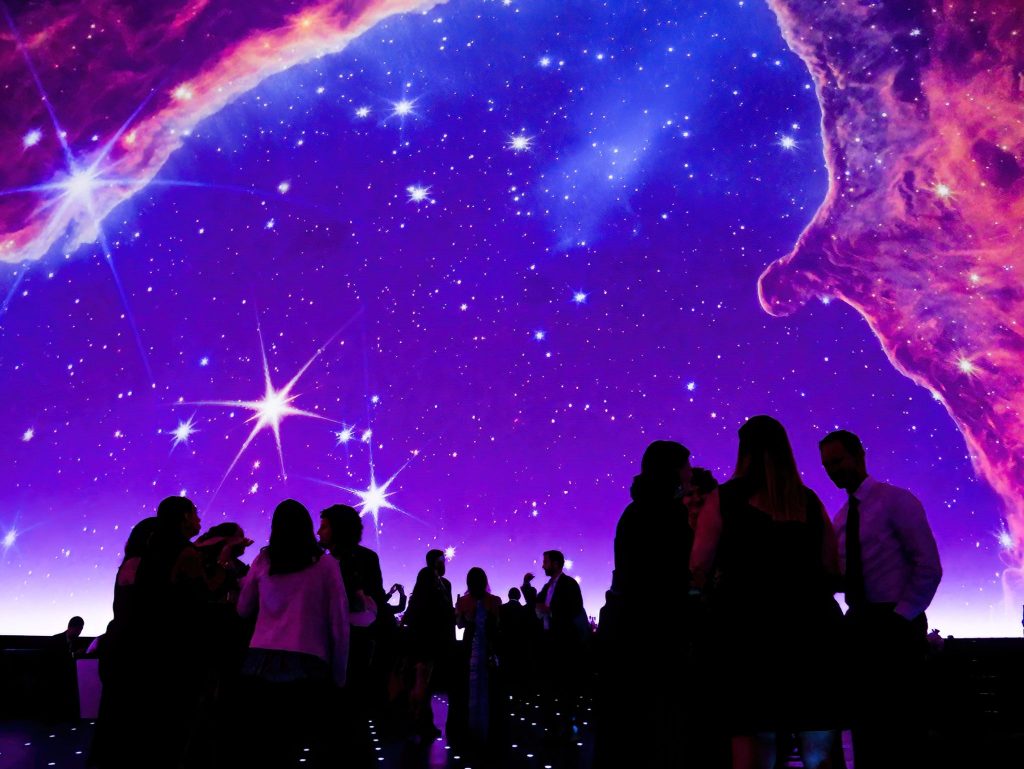 “The extraordinary life of the art historian Paul B. Moses was defined by barriers overcome,” relays the University of Chicago library of their current exhibit. “His journey stretched from Ardmore, Pennsylvania, and Haverford College, where he was the first African American student admitted, to Harvard University, where he earned a Master’s and began a dissertation on the French Impressionist Edgar Degas, and finally to the University of Chicago, where he became an assistant professor. Along the way he distinguished himself through innovative teaching and research, wrote and lectured widely on art, and produced numerous oil paintings, watercolors, and drawings. In 1966, at the age of thirty-six, Moses’ life was cut short when he was murdered by two young white men. Here, for the first time, his legacy as an exemplary scholar, educator, and critic is presented through the writings, photographs, video and audio clips, personal correspondence, ephemera, and original art he left behind.”

“The Cleveland Museum of Art’s thirty-eight-member board of trustees on Monday elected Ellen Stirn Mavec, president of the Kelvin & Eleanor Smith Foundation, as the museum’s new board chair for a three-year term,” reports Cleveland.com. “An influential philanthropist and former dealer in decorative arts, antiques, and jewelry, and a trustee who has served on the museum’s board since 1991, Mavec succeeds Scott Mueller, CEO of Dealer Tire and also one of the museum’s leading current benefactors.”

The billion-dollar Lucas Museum of Narrative Art, being built in Los Angeles’ Exposition Park and once mooted for the Chicago Lakefront, “has pushed back its opening date from 2023 to 2025.” The two-year delay “is due to pandemic complications, specifically supply chain issues that have made the procuring of certain construction materials difficult…The museum broke ground in March 2018 and ‘topped out’—the term for setting the final beam within its steel structure in place—in March 2021… Two more years are needed not only for construction, but to also make sure the finished building is suitable to house art.”

“A plan to build a training facility for the Chicago Fire soccer team was rejected by a City Council committee,” but zoning committee chair Tom Tunney “moved to reconvene the committee Wednesday morning to reconsider the proposal,” reports Block Club Chicago. “The pro soccer team is seeking to build an $80 million training facility on 24.2 acres of vacant land managed by the Chicago Housing Authority…. A zoning change needed for the project to proceed was rejected 7-5 Tuesday.”

“There could be a spike in investment around the Thompson Center as developers create housing and convert buildings for an influx of Google workers,” reports Block Club.

Sterling Bay adds a footnote to its $6 billion Lincoln Yards masterplan, reports YIMBY Chicago: “a fifteen-story apartment building directly to its east in Lincoln Park. The project faces Sterling Bay’s mega-assemblage from across the North Branch river, calling for 359 new units.” Thirty-six residences would be affordable. “In addition, Sterling Bay will contribute $5.1 million to the city affordable housing fund.”

“Like many of us, Oliver Poilevey, Jonathan Zaragoza and Amer Abdullah learned to cook at their parents’ sides. But one small difference: Their family kitchens were actually notable Chicago restaurants. Now chefs themselves, these children of local culinary figures are already leaving their own mark on the city’s food scene,” profiles Cate Huguelet at Chicago magazine.

Park Ridge aldermen rejected a pitch to erect a statue of the eighty-year-old Harrison Ford, reports the Park Ridge Herald-Advocate, “citing the high cost of the project and Ford’s lukewarm relationship with the city… Ford was bullied while living in town to the point that other kids would roll him down a hill into thorny bushes on a daily basis.”

Tonight, Reeling: The Chicago LGBTQ+ International Film Festival features the U.S. premiere of “The Shiny Shrimps Strike Back” as the opening night presentation at the Music Box. Afterwards, director Cédric Le Gallo will participate in an audience Q&A. “Audience members are invited to attend a special fortieth anniversary after-party with complimentary hors d’oeuvres and libations in the Music Box Lounge and Garden, with award-winning actress Honey West (Mercury Theater’s “Priscilla, Queen of the Desert”) emceeing the celebration and, in an homage to Reeling’s founding in 1981, appearances by eighties superstars Sir Elton John, Ziggy Stardust, Prince, and Tina Turner (or maybe uncanny lookalikes?).” More here.

Chicago filmmaker Lori Felker’s “Spontaneous” (2020) and “Discontinuity” (2015) are available to subscribers of the Criterion Channel. “It is a great honor to see my films alongside such an inspiring collection,” writes Felker. From Criterion: “Utilizing fractured editing, cacophonous sound design, and a whole lot of (possibly imaginary) cats, Lori Felker’s ‘Discontinuity’ brilliantly evokes the rapidly escalating pileup of interruptions, incongruities, and absurdities that arise when a long-term couple reunite after an extended separation. While at the Slamdance Film Festival for the premiere of ‘Discontinuity,’ Felker experienced a miscarriage, an incident that inspired ‘Spontaneous,’ a fearlessly honest, vividly observed essay film that viscerally conveys the confusion, trauma, and surreality of an experience common to so many women.”

The City of Chicago, a sanctuary city, and Chicago Public Library are establishing the nation’s first Book Sanctuaries to give refuge to banned books and give the power to readers to defend books everywhere—in Chicago and across the country. “Our intent,” CPL advises, “is to provide a place for others to join the Read-sistance, sign-up to be a Book Sanctuary, and to share resources to support our colleagues. The Chicago Public Library is declaring every one of its libraries as a Book Sanctuary. But they should exist everywhere, all over the country–in community centers, schools, coffee shops or parks, even your own bookshelf. Turn the page on endangered books. Establish your own Book Sanctuary today.” More here.

“Paddock Publications, publisher of the Daily Herald, is using its mailing operation to send out Dan Proft’s fake newspaper political mailings. It strains belief when trusted media is more important than ever, Paddock’s pursuit for cash outweighs its journalistic responsibility,” posts Tribune political reporter Rick Pearson on Twitter, building on a report by Capitol Fax.

The Orion Ensemble opens its thirtieth-anniversary season with a program showcasing the first piano and clarinet quartets the ensemble performed together, along with a playful twentieth-century work. The program, which welcomes back frequent guest violist Stephen Boe, takes place at three venues: New England Congregational Church in Aurora (September 25), followed by a gala benefit reception; PianoForte Studios in Chicago (September 28) and Nichols Concert Hall in Evanston (October 2). The Chicago and Evanston performances also will be livestreamed. More here.

Times Opines Most Interesting Opera Is In The Midwest

“While the Met prepares to start its season next week, two other companies opened new productions on Saturday, with imaginative directors who won’t grace the Met stage any time soon but should: at the Lyric Opera of Chicago, a ‘Fiddler on the Roof’ by Barrie Kosky, and at Detroit Opera, a version of ‘Die Walküre’ by Yuval Sharon,” writes Joshua Barone at The New York Times. “While there were subtle thematic connections between the two, they were more notable for simply happening—the latest examples of conceptual daring and directorial promise beyond New York City limits… It is the finest ‘Fiddler’ I’ve seen, one that could be adapted with ease and success on Broadway—where, in addition to the Met, Kosky belongs.”

The Museum of Contemporary Art’s Chicago Performs festival, which highlights Chicago-based artists, debuted this past weekend to sold-out shows. Guests included arts professionals from around the country, including New York City, Milwaukee, Austin, Pittsburgh and Maine. “The two-day festival featured three artists: Derek Lee McPhatter, a theater-maker committed to emphasizing narratives at the intersection of race, class, gender, sexuality, and technology; Erin Kilmurray, a genre-straddling choreographer drawing on the space-making possibilities of nightlife culture, theater, and dance through electric often political performance; and Bimbola Akinbola, an artist and scholar concerned with the nature of belonging and queerness, using theory, performance, and visual art to organize, remember and repair. Each artist’s work underscored the shared creativity between artists, audiences, and community networks to foster shared goals and a sense of belonging.” Madeleine Grynsztejn, Pritzker director of the MCA says, “The MCA is exhilarated to see the success of Chicago Performs. Supporting and celebrating new work by the next generation of powerful Chicago performing artists is a privilege and a necessity, leading to invaluable ties between the museum and its communities. This initiative is far from over. We will continue to forge a stronger relationship between the MCA and the diverse ecosystem that makes up this city.”

“Cook County Clerk Karen Yarbrough issued a clarion call for military veterans to step back into service as poll workers this election year, as the region faces a ‘critical shortage’ of the election judges they need to make the ballot-casting process run efficiently,” reports the Sun-Times. “With seven weeks to go before Election Day, Yarbrough said her office has about 4,350 people lined up to work at suburban polling places on November 8, but she needs at least 7,000 ‘to adequately cover’ all of them.” WTTW: “Yarbrough said the pandemic has hindered her office’s ability to recruit election judges and poll watchers, and many previous judges may also be retiring given that the average age is between sixty-five and seventy.But she says the political climate isn’t helping.” You can sign up for Illinois’ permanent vote-by-mail here.

The Adler Planetarium hosted Celestial Bash on September 10, a reimagined version of its biggest fundraising event of the year. Held at the Chicago lakefront location once again, Celestial Bash guests got to explore the entire museum after hours. Highlights of the in-person event included getting to know the world’s first high-altitude balloon light pollution mapping system, designed and flown with the help of their teens and volunteers; experiencing Chicago’s oldest planetarium, the Atwood Sphere; looking at the universe through the new Doane Observatory telescope; spending time under the Grainger Sky Theater dome as space visualizations transported guests to other worlds, and dancing the night away against a backdrop of the Chicago skyline. The Adler’s first in-person event in nearly three years raised almost $1.2 million for the work the Adler does in support of their mission to connect people to the universe and each other under the sky. More here.

Nonprofits May Need To Spend More On Overhead

“Nonprofits that spend more on information technology, facilities, equipment, staff training, program development and fundraising tend to be more successful than those that scrimp on these ‘overhead expenses.’ But many donors are reluctant to support groups that spend heavily on those priorities because they associate high overhead costs with wasted money and bad management,” relay Hala Altamimi and Qiaozhen Liu at The Conversation. “Because this problem is of concern to donors and charities alike, we–two scholars of public administration–set out to identify the point beyond which spending more on overhead stops enhancing an organization’s operations. That is, how much overhead spending is enough, and how much is too much?”