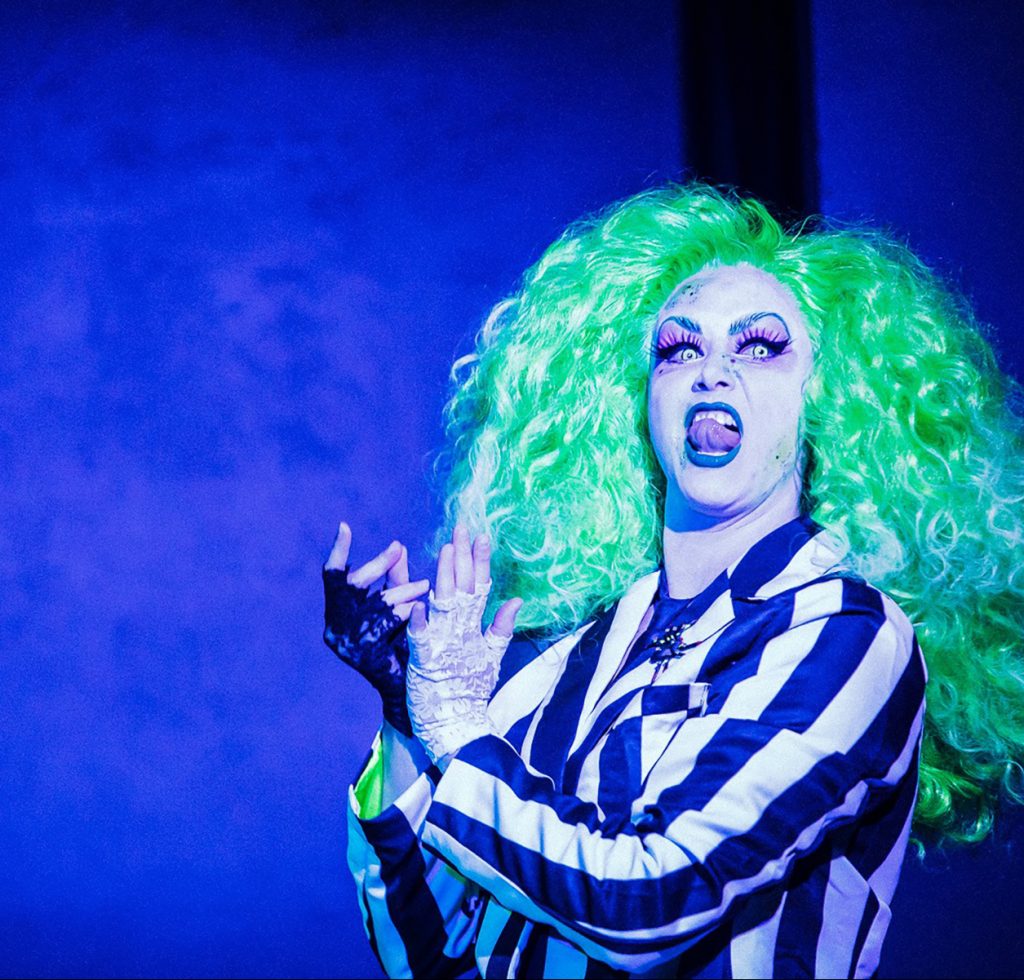 Originally the site of the Old Heidelberg Restaurant, the new two-story location of Blick Art Materials at 16 West Randolph “boasts an elegant façade designed by the same architecture firm responsible for the Merchandise Mart and Civic Opera Building. Wooden doors above the glockenspiel clock conceal the structure’s quirkiest feature—a colorful statue of King Gambrinus, created by Chicago artist Edgar Miller in 1934. It was the building’s historical ties to Chicago and its artists that led Blick, the nation’s largest and oldest art supply retailer with roots in Illinois, to choose it as a location for its newest store,” the company relays. “Blick is known for being the country’s largest fine art supply company. As well as being a pioneer in online sales, we have stores in nearly every major market,” Blick CEO Robert Buchsbaum says. “What is less well-known is that we are a family business that has been based in Illinois and Chicago for generations. As a lifelong Chicagoan and current Lincoln Park resident, I am so pleased that we are able to make this investment in a new flagship-level store in our downtown community at a time when many more brick-and-mortar stores are closing than opening.”

“One of the largest carriers operating on the Mississippi, Ingram Barge Co., notified customers it was invoking force majeure for contracts on part of the drought-stricken river,” posts Wall Street Journal supply chain reporter Paul Page. “Drying Mississippi River Threatens U.S. Supply Chain Shipping,” the paper headlines. “Sections of the Mississippi River are approaching low water levels not seen in more than three decades, disrupting a vital supply lane for agriculture, oil and building materials… The low water, caused by a lack of rain in the Ohio River Valley and the Upper Mississippi, has halted commercial traffic and river boat cruises at…spots below Illinois. Prices to ship goods have more than doubled in a matter of weeks. Barges are grounding on sandbars in unprecedented numbers and many ports and docks no longer have water deep enough for commercial boats to safely reach them.” CNN: “The river is so low, people are going to Tower Rock on foot… Tower Rock–a massive island in the middle of the Mississippi River south of St. Louis–is typically surrounded by water and only accessible by boat.”

Longtime Milwaukee manufacturer Harley-Davidson is planning not to return to work, reports Bloomberg. “The 119-year-old motorcycle manufacturer shuttered its Milwaukee headquarters in March 2020 and hasn’t fully opened it since. Chief executive officer Jochen Zeitz is even planning to repurpose the 500,000-square-foot complex later this year, showing just how serious Harley is in its commitment to remote work… Zeitz says virtual meetings ‘democratize’ the workplace.”

Architecture Critics Blair Kamin And Lee Bey Talk “Who Is The City For?”

Lee Bey and Blair Kamin sat down with WTTW to talk about their book, “Who Is The City For? Architecture, Equity, and the Public Realm in Chicago.” Kamin kicks off the chat: “I don’t think the city under Rahm Emanuel did good enough on equity. I think there were isolated projects that attempted to address the issue of equity, but they tended to be one-offs… If there’s anything that Lori Lightfoot and her planning commissioner, Maurice Cox, have done well so far—and I stress ‘so far’—it is the systematic approach of the Invest South/West program. Ten neighborhoods… getting a total of $1.4 billion in investment where people thought it was impossible to get any. The problem for them is that these things take time. You don’t just snap your finger and—poof!—change a neighborhood overnight.”

“There’s a trend emerging in restaurants around the city: restaurants are turning your dinner into a show-like experience. [David] Manilow has noticed the trend particularly in the West Loop, where traditional restaurants are now serving much more than that,” reports Crain’s, with Manilow checking into Lyra, Nisos and Gino and Marty’s.

Southern Pop-Up For Halloween From MONEYGUN And Lou’s Backyard

“FTC chair Lina Khan will almost certainly sue to block this consolidation. Despite a monopoly-friendly judiciary, she has a strong chance of success,” writes David Dayen at the American Prospect. “The $24.6 billion deal would put together the country’s two largest supermarket chains at a time when prices for groceries are already skyrocketing… Kroger brands include Ralphs, Dillons, Food 4 Less, Fred Meyer, Harris Teeter, King Soopers and Mariano’s… Albertsons, boosted by a 2015 merger with Safeway [owns] Acme, Haggen, Jewel-Osco, Shaw’s, Pavilions, Vons, and many more. The illusion of choice in supermarkets masks the dominance.” Channel 7 checks in with South Side Jewel shoppers: “Critics of the deal remained concerned the merger will squeeze consumers in Black and brown neighborhoods that are already struggling to afford food.”

The School of the Art Institute of Chicago’s Gene Siskel Film Center has announced the full schedule for its Twenty-Eighth Annual Black Harvest Film Festival, which will take place in person at the Gene Siskel Film Center from November 4-20 and virtually November 21-27. The monthlong showcase of Black stories will feature nineteen feature films; four short film programs; and over fifteen separate in-person and virtual filmmaker and cast appearances, alongside anniversary screenings, restorations, receptions and special events. “This year’s festival will be dedicated to the Film Center’s dear friend Sergio Mims (1955 -2022), the co-founder of the festival and its longtime co-programmer and consultant. Sergio passed away on Tuesday, October 4.” More here.

“The Lost Story Of Emmett Till: Trial In The Delta” From NBC5 And Collaboraction Nominated For Regional Emmy

“The Lost Story of Emmett Till: Trial in the Delta” by NBC Chicago and Collaboraction Theatre Company has been nominated for a Chicago/Midwest Emmy Award. The original teleplay, spearheaded by NBC5 anchor Marion Brooks, was filmed in a day in February 2022 at NBC’s Chicago studio. It’s streaming on Peacock and other services, as well as on the NBC5 Chicago app. “Trial in the Delta,” the first theatrical version drawn directly from the recently unearthed 1955 trial transcript of the two men found not guilty of murdering Emmett Till, will be seen in a fully-produced, live stage version February 9-19, 2023 at the DuSable Black History Museum and Education Center. Tickets will be available from Thursday here.

Is the story still Kanye West? Or the story of how his privileged diatribes are covered? After fresh inflammatory appearances over the weekend, the Oak Lawn native announced plans to purchase Parler, a low-traffic rightwing social media site controlled by the husband of political advocate Candace Owens. Owens appeared with him at a fashion event wearing “White Lives Matter” T-shirts and widely defended his recent antisemitic commentary after Twitter and Instagram limited his postings. “Amazing long con work by those who suckered in Kanye and unloaded this company on him for a premium,” posts Media Matters’ Matthew Gertz.

Revolt, a Sean Combs-owned podcast network, invited Ye onto the Drink Champs podcast, on which he not only expanded on his antisemitic commentary, but added debunked claims about the death of George Floyd. (Floyd’s family has said it is considering a lawsuit for false statements against ye: “Claiming Floyd died from fentanyl not the brutality established criminally and civilly undermines & diminishes the Floyd family’s fight,” the family’s lawyer Lee Merritt posted.)

Israeli newspaper Haaretz, which has a separate “Kanye – Jews” tab on the front page of its website, looks at the weekend’s antisemitic and other remarks by the music star. “I want you to visit Planned Parenthood. That’s our Holocaust museum,” the rapper told the Drink Champs podcast, echoing one of his unaired comments from Tucker Carlson’s Fox News interview where he said “known eugenics” Margaret Sanger founded Planned Parenthood alongside the Ku Klux Klan “to control the Jew population.” … West would later say: “Don’t say ‘fuck Black Lives Matter’ or you will be cancelled by the Jewish media… They been fucking with me for too long. They put the crazy narrative out there… This is my exact point: Jewish people have owned the Black voice, whether it’s through us wearing a Ralph Lauren shirt or all of us being signed to a record label or having a Jewish manager or being signed to a Jewish basketball team or doing a movie on a Jewish platform like Disney.” Rolling Stone writer Brian Hiatt tweets that Revolt posted, then retracted a fact-check on Ye’s ramblings. The unedited Parler press release is here.

Jeff Sharlet, author of “The Family“: “Two of the most famous Americans in the world, both with huge followings some like to imagine have abandoned them, spewing antisemitism—fascist hatred of Jews—the last two days. No ignoring either. Bad shit is converging.” Short remark, from NBC culture reporter Kat Tenbarge: “Stop interviewing Kanye West challenge.”

The Second City Toronto has announced a new home at One York Street. The flagship will be The Second City’s largest, most state-of-the-art venue since the comedy company first opened its doors in Canada in 1973. It features three theaters, nine Training Center studios for student classes and partner workshops, and a full-service restaurant and bar with food by Canadian hospitality leaders Oliver & Bonacini. First announced in 2019, the space comprises the Mainstage Theatre, with a seating capacity of 244; and Theatre ’73, seating 170. The John Candy Box Theatre will feature a portion of the original stage from The Second City’s home circa 1974, The Old Firehall which held legends such as John Candy, Eugene Levy, Martin Short, Catherine O’Hara, Gilda Radner, Colin Mochrie and Mike Myers. More here.

“There’s no legal cannabis market in the country quite like what’s sprouted up in Minnesota,” reports Politico. “What’s developed so far is a peculiar experiment in quasi-legalization—one that’s sent cities and counties scrambling to put guardrails around the fledgling industry and raised concerns about public health and safety.” “They have effectively legalized a very different regulatory approach for hemp than we see in any other state,” Gillian Schauer, executive director of the Cannabis Regulators Association tells the publication. “Everything started July 1, when low-potency, hemp-derived edibles and beverages became legal. Although they’re capped at five milligrams of THC—the psychoactive element in cannabis—no limits were established on how much adults could stock up on… The lack of state licensing requirements to produce or sell the newly legal goods means nearly anyone can manufacture high-inducing gummy bears in their mom’s basement without getting approval from any state agency.”