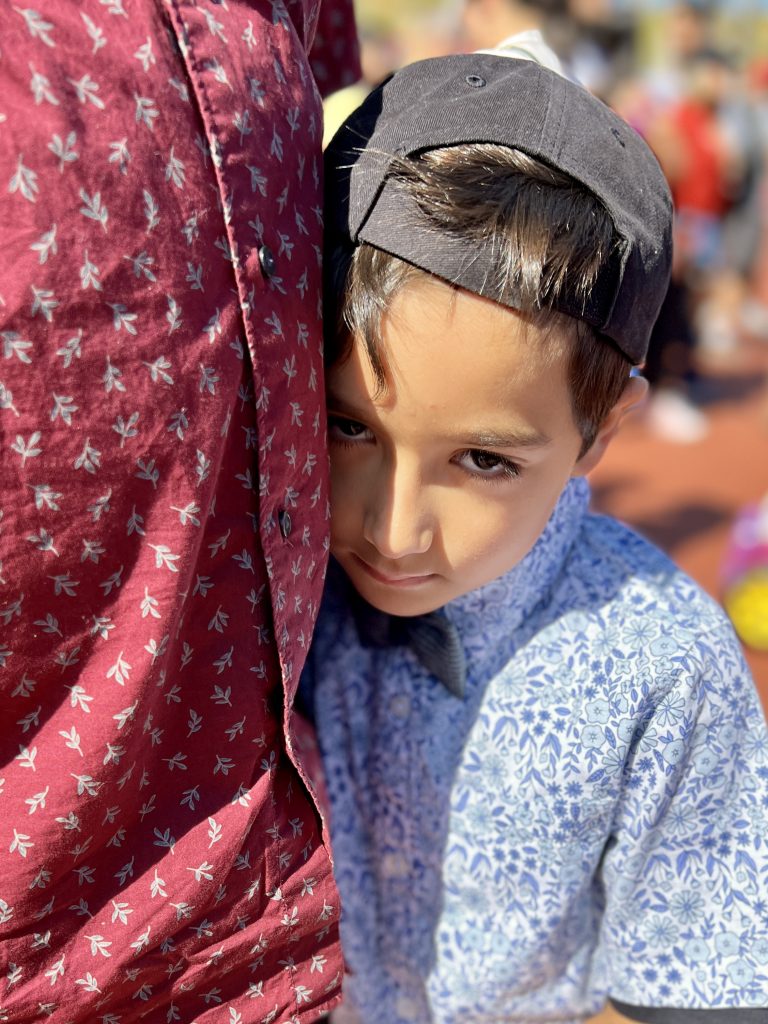 Nostalgia can be deceptive. Only grade-A, unadulterated nostalgia could explain why I thought it was a good idea to drag my husband and six-year-old son to an amusement park while we were vacationing in Brazil, my home country; why I forgot about the long lines, the overpriced subpar fast food, the abundance of cranky kids and grumpy adults, and, last but not least, why I overlooked the nadir of the experience: the horrifying, panic-inducing rides.

I started realizing the magnitude of our mistake as we arrived and started looking for parking. Navigating a sea of cars and tour buses was the preamble to the unpleasantness we were about to experience. Well, at least we had A/C in the car. We did not have A/C—or shade—in the huge, labyrinthine line we faced to simply enter the park.

We started with a good old-fashioned carousel. Not much of a line there. My six-year-old didn’t want us around, so my husband and I hid in a corner and tried to smuggle some photos of him. My son enjoyed the carousel, but my husband and I felt nauseous with all the spinning and had one of the many epiphanies of the day: we are OLD. We get nauseous. And grumpy.

Off we went to another boring ride with a short line, but this time our son wasn’t so happy; he ended up having to sit in the back of this two-kid airplane, while he wanted to go in the front. To soften his mood, we thought we’d grab a bite to eat; it was almost noon, after all. But the lines at this unappetizing cafeteria were long. We just drank some water. And then my husband, my son, and I settled for an average ride, with an unimpressive line. Or so we thought.

The ride in question was the Viking ship, a mainstay in amusement parks everywhere. We eyeballed the line and figured we’d spend about half an hour in it, have a bit of fun, and then get the hell out of that park. But for some reason, the line wouldn’t move. And the reason was, I figured out later, the goddamned VIP pass holders. For every turn filled with us commoners, there were one or even two turns of the ride filled exclusively with those VIPs. And no, they couldn’t mix with us. If their turn wasn’t full, the ride would simply stay idle and wait for more VIPs to come to fill the ship. I’m surprised they didn’t sanitize the seats after the plebes used them.

That started really bothering me. It was hot and I wanted to eat. In my revolt, I spotted a potential ally in the line—an animated woman complaining about the situation. I thought to myself, “Now’s the time to start my mutiny.” One of the advantages of being old is that I simply. Do. Not. Care. So I started chanting very loudly, in Portuguese (the translation won’t do my chants justice): “Enough of the VIPs! Enough of the VIPs!”, “It’s not fair! It’s not fair!” and “Let’s get going with this ship! Let’s get going with this ship!” My son was absolutely mortified and tried to muzzle me, but at that point I was unstoppable. Soon enough I had a large group of co-conspirators following my lead. I had officially become the leader of an anti-VIP movement, and people in the line were venting their frustrations and rehearsing their complaints to the park with me. Once I became a “line activist,” time quickly went by, and before we knew it, it was our time to board the ship.

We made the mistake of asking our son if he wanted the seats that went highest in the air, and obviously, he emphatically said “YES!” So off we ran to the very tip of the ride, anxiously awaiting for it to begin. As soon as the ship started swinging a bit higher my son began screaming, but it wasn’t a good scream; he was in full panic mode. I’ve never seen my son so terrified, and that terrified me. My husband kept telling him to keep his eyes open, while I told him to keep his eyes closed. I’m not sure what my son decided to do, but whatever it was, it wasn’t working. Finally, the ship came to a full stop, and we couldn’t leave that godforsaken place soon enough.

The truth is I could have simply crossed my arms in the air, signaling that we wanted the ride to stop. We received those instructions before the ship took off, but since they were given in Portuguese, I was the only one in our trio who knew. In that whirlwind of emotions up there, in a state of horror that suspends time, I was able to make the cold calculation that I’d be utterly embarrassed if I had to not only yuck everybody’s yum but also give up something I had so fervently fought for. So I sacrificed my whole family on the altar of my insurgent reputation, choosing fear over shame.