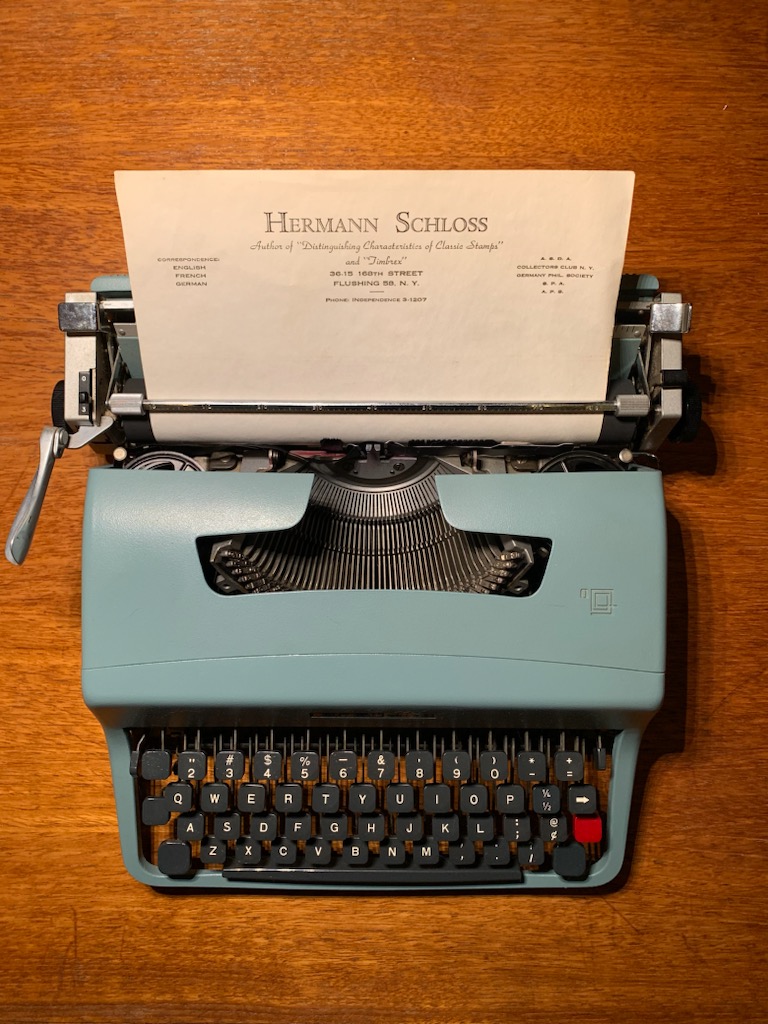 Two-and-a-half years ago a close friend gifted me a manual typewriter, a 1964 Royal Safari, completely reconditioned by a genius in California named Kenneth Alexander, after my unceremonious departure from the Latin School of Chicago, where I taught for eleven years. I have had eight teaching jobs in the last two-and-a-half years. I lost friends over it, lost contact with others, bailed out on plans with still closer ones. I feel disappeared, alone, and because of all of the jobs I’ve had since Latin, I feel like I exist everywhere and nowhere at the same time.

But I have written on manual typewriters since then, preferring to hurtle through my thoughts on paper rather than obsessively rereading and correcting mistakes on a screen during early drafts. The paralysis I once felt as a writer, brought on by a fear of mistakes, has almost dissipated. Manual typewriters have set me free, and as a result, I now own a half dozen.

The sixth is an Olivetti Underwood Lettera 32, the same model Cormac McCarthy has used to write nearly all of his work; his was later purchased at auction for over $250,000. Reportedly Francis Ford Coppola wrote “The Godfather” on the Lettera 32.

My brother Jeff gave this one to me after yet another stretch of not speaking to one another for no reason other than distance, routine and time. He owns a successful commercial and industrial refrigeration business where we grew up on Long Island, and he’s got a guy who does junk removal. People on Long Island always “got a guy.”

This guy was on a job cleaning out an abandoned storage locker—more like a small garage—left unpaid by someone who most likely forgot about it, or he died before he could forget about it. My brother’s guy came across something that looked like a bowling bag, only narrower. When he opened the case and discovered the Olivetti, he called my brother, whom he owed a favor for mistakenly throwing out something my brother cherished during a separate junk removal job, an old brass fireman’s nozzle, one used by New York City firefighters back in the day.

My brother sent me a photo of the machine and a text: “You want it? It’s yours.”

Jeff sent me another photo, though, something that interested us both way more than the actual machine. Inside the case was a single sheet of thick yellowed parchment, a name printed proudly at the top in block serif font: “Hermann Schloss.”

Presumably, the typewriter now in my possession once belonged to this man, and all I knew about him lay in a strange array of type: some cursive, sans serif, bold, not bold. Some words all uppercase while others both upper and lower. The strangeness of his choices, his seeming inability to make up his mind, or his perfect willingness not to opt for uniformity, fascinated me, and I quietly vowed to bring him back to some semblance of life, at least in my mind, by finding out more about him.

I’m not a typewriter restorer as much as I am a cleaner. I know how to clean one properly. If anything significant were wrong with the machine, I would probably take it apart, forget how to reassemble it, sweep all the parts into a small cardboard box, and put it in the closet. All this one needed was a good cleaning and a new ribbon—things I could handle. Hermann Schloss took good care of this machine, probably by using it regularly. 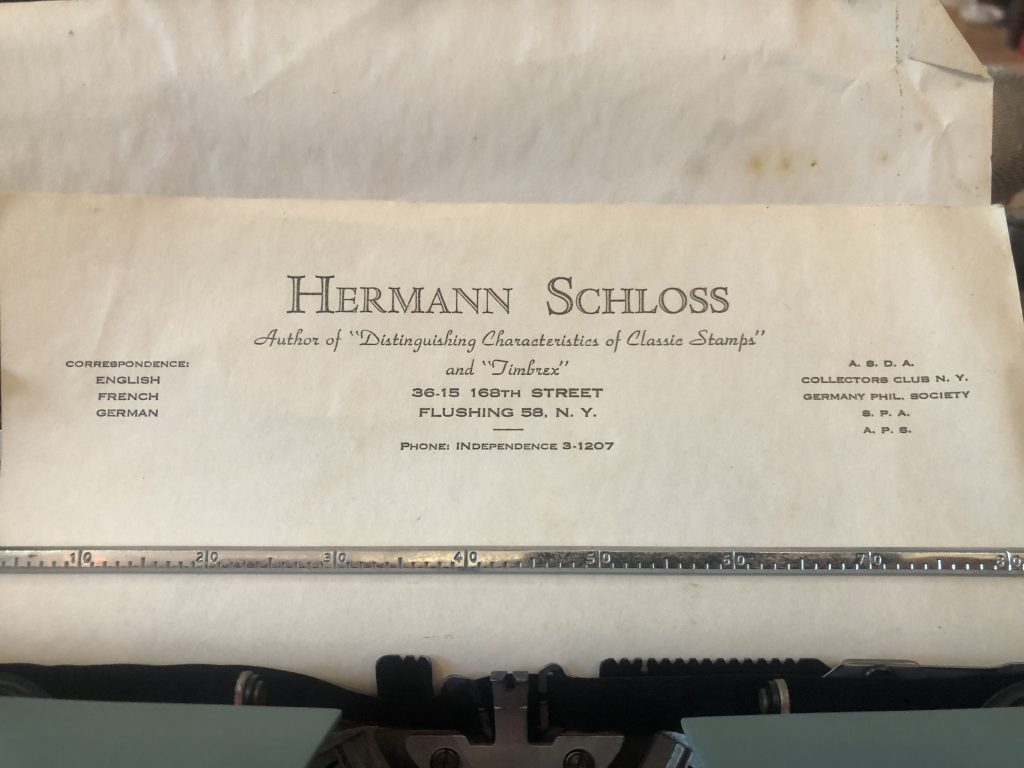 Hermann Schloss was a philatelist, a thing I had never heard of until I discovered this man and his letterhead. The word is an odd one, the Greek root phil- (loving) combined with atel?s (free from tax, toll, or charge). Stamps are used in lieu of a toll, so philately is a “love for stamps,” apparently.

He wrote two books about his love for stamps. More specifically, he wrote about counterfeit stamps: how to spot the tiniest of characteristics that would indicate fraud. His books are listed on his letterhead in reverse chronological order. “Timbrex” came first in 1944, and his more popular (and more clearly titled) “Distinguishing Characteristics of Classic Stamps” was published in 1948. I imagine he was more proud of the latter, as I found it cited in just about every stamp collectors’ newsletter and bibliography I found online.

A few copies of the more popular title exist online, but I’m not going to pay a hundred dollars for one. My interest in his life far exceeds any interest I have in detecting counterfeit stamps. I wrote to a book collector and offered a few dollars if they would photograph anything personal he may have written in the pages. All I wanted was a biographical note, maybe some self-indulgent side commentary in the book somewhere, but from the pages I was able to see online, Schloss didn’t write that way. His writing was clear and direct, meant to instruct rather than impress. In the end the bookseller ignored my request. I imagine they thought it a strange ask anyway. Why would anyone want to know anything about a stranger, popular in only the tightest, most obscure circles?

My son, David, ridicules me for my habit of looking up where the cemeteries are in any new American city we travel to and who’s buried there. It’s come up a lot recently because my wife and I have been driving him all over the country on college visits. There’s something drawing me to the dead, something not that unusual if my interest were just in the resting places of famous people, but as I get deeper into my fifties, I want to know more about ordinary people who no longer exist—people a little like me.

Hermann Schloss’ final resting place is Mount Hebron Cemetery in Flushing, a city in Queens County, New York that is home to the U.S. Open in tennis and the New York Mets. It’s also the inspiration for the fictional Valley of Ashes in “The Great Gatsby” by F. Scott Fitzgerald, where nondescript men covered in soot to the point of invisibility do nothing but shovel ash while expensive cars roar past (on what is now Route 25A) to get to all that life happening in New York City.

More than 217,000 people are buried in Mount Hebron, more than the population of Salt Lake City. As a child I remember riding in the car to Brooklyn to see my Aunt Sis and being terrified as Calvary Cemetery unfolded, its seemingly endless headstones—miles and miles of dead people—rolled with the landscape just off the highway. Almost 1.8 million people are buried there, most of them, I imagine, forgotten.

I managed to locate a photograph of part of the book jacket for “Distinguishing Characteristics of Classic Stamps.” It reads:

“Hermann Schloss wrote this book during a three-year period of hiding with the French Underground. During this self-imposed imprisonment in a room where he never even saw the light of day, Mr. Schloss had little of most things, but plenty of time. Because of this, philately has gained immeasurably, for his vast philatelic knowledge, combined with his ability to draw his own designs…”

Aside from the incredible story that Schloss participated in the French Resistance against the Nazis for three years—something I selfishly wish he wrote about instead of the stamps—I’m struck by the word “time,” which is actually underlined on the book jacket. What once existed as an abundant resource for the man is spent. There is no time left.

I also thought for a second that the typewriter I held in my hands may have typed the words of the book, that this was, in fact, the typewriter Hermann Schloss had with him while fighting the Nazis in World War II.

But the Olivetti Underwood Lettera 32 was manufactured in 1963, making that an impossibility. He died two years later, on July 10, 1965, at age seventy.

Hermann Schloss lived in a low-rise apartment building on 168th Street in Flushing, Queens. He spoke fluent English, French and German. Schloss was a member of the German Philatelic Society and The Collectors Club in Manhattan, a philatelic club founded in 1896 that still exists. A quick search of Hermann Schloss on the Club’s website yields no results.

I will continue my pursuit of the details of Hermann Schloss’ life. I want to know who he loved and where he drank, if he had any sons who loved him but didn’t really like him, if he had a brother who thought about him once in a while. I’m driven to know more about Hermann Schloss and people like him as if there might be a moment in the future when the only evidence of my time on earth is something like a junked typewriter accompanied by a sheet of parchment, and when you feed the paper into the machine, the platen catches it, and you scroll to the space just beneath the letterhead, it sort of looks like a headstone.