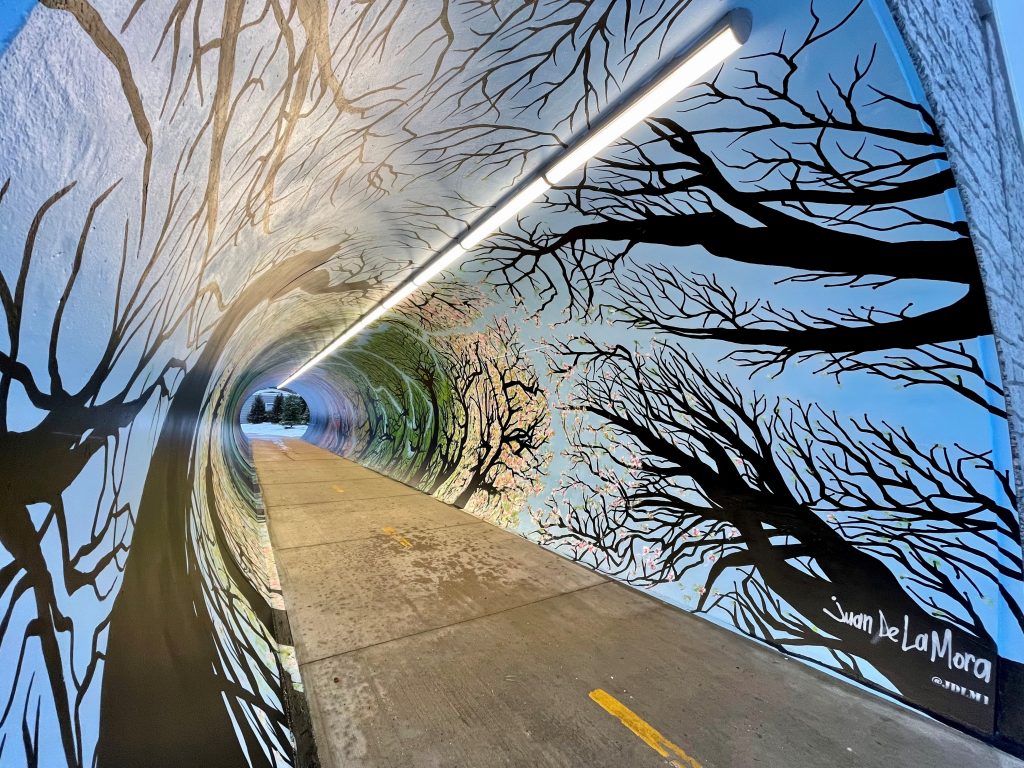 The Art Institute’s associate vice president of capital programs Emily Benedict tells American Builders Quarterly about maintaining and expanding “one of the world’s most renowned centers of art and education.” From the “original building constructed in 1893 to its expansion over the rail lines… Benedict must manage near-constant construction, rehabilitation, and growth plans… while ensuring priceless art is left unharmed. She also ensures that the public can encounter some of the world’s greatest works unimpeded by noise or detour… ‘Whether that’s a completed build or a beautiful gallery project, all of the trials and tribulations sort of fade away once you get to see something accomplished.'”

The College of DuPage Public Art Committee, in partnership with the Glen Ellyn Public Art Committee, will dedicate the Glen Ellyn Taylor Avenue pedestrian underpass tunnel mural, “The Grove” on Thursday, January 12. The pedestrian underpass tunnel, constructed in 2018, is almost a hundred feet long and twelve feet in diameter. The College of DuPage Public Art Committee solicited proposals and received more than sixty submissions from around the world. The final decision was left to the community and more than 2,000 voted on Juan De La Mora’s design. “The Grove” was created with acrylic paint and encompasses every square inch of the tunnel. “The concept [is reminiscent of] the forest or ‘The Grove,’ of Prospect Park, what was Glen Ellyn of the late nineteenth century,” says De La Mora. “The thousand-acre Grove was made up of many trees—including red, white, black and bur Oaks—as well as hickory, chestnut and Ash. It spanned both sides of the DuPage River. The mural is intended to engage the public by inviting them to pass though The Grove, from both sides and experience from below nature’s four seasons and its influence on the change in skies and tree canopies year after year.” More on the COD DuPage Public Art Project here.

Cait Hardie, who lives in Chicago and was born in Australia, presents “Stillscapes.” “Inspired by travels in Japan and Hong Kong, these pieces embrace the speed, the noisy and chaotic in the urban landscape, while finding the order, quiet and stillness within them. There is something about travel that leads to a particular way of seeing. In a new place, the mind is fresh and open; our senses are heightened. We notice things that we might have overlooked in our everyday life. Certain things stand out—color, structure, direction, patterns—as the mind seeks to make sense of the unfamiliar.” ARC Gallery, opening January 5 through January 28. More here.

“The Lost Photos Of Jay King”

Chicago magazine has a trove of unpublished work from the street photographer Jay King. “King, seventy-eight, spent his working life as a commercial photographer. But his heart was on the street. Starting in 1962 and for the next four decades, he would roam Chicago with his small, quiet Leica rangefinder camera. His goal? He says he had none: ‘I just enjoyed it.'” King pored over his negatives and proof sheets during the pandemic. “‘I was shocked by what I had passed over… Times change. Tastes change. What seemed insignificant then became important now.'” Nine finds and the stories behind the pictures here.

Another Take On Downtown Conversions

“Remote Work Is Poised to Devastate America’s Cities,” New York magazine reports dramatically. “Full-time remote work has grown less prevalent since the worst days of the pandemic. But flexible work arrangements—in which employees report to the office a couple times a week—are proving stickier… Collapsing office attendance rates are taking cities’ tax revenues down with them. When only fifty percent of a company’s staff leave their homes in the morning, that firm’s desire for floorspace plummets.” Across the U. S., “only about forty-seven percent of offices are occupied… The liberation of America’s white-collar homebodies need not come at cities’ expense. The remote work revolution could devastate municipalities’ downtowns and finances, or it could help resolve their housing crises. If they can summon the requisite policy imagination and flexibility, city officials can make ‘work from home’ work for everyone.”

“Spawned in the wake of World War II, tool libraries lend implements and provide practical guidance to community members who can’t afford to own or store their own tools,” reports In These Times. “The greatest increase in tool lending libraries in the United States came around 2008 during the Great Recession, according to the study, with institutions like the Sacramento Library of Things in California and the Chicago Tool Library in Illinois opening as part of this ‘tool-lending movement.’ … For all of these moments when the right tool for the job is out of reach, there are lending libraries that have been springing up around the country, which supply more than just books.”

The Fight (For; Against) American Small Town Wind Farms

“In the fight against climate change, national goals are facing local resistance. One county scheduled nineteen nights of meetings to debate one wind farm,” reports the New York Times from Monticello, Illinois. “In the fight against global warming, the federal government is pumping a record $370 billion into clean energy, President Biden wants the nation’s electricity to be one-hundred-percent carbon-free by 2035, and many states and utilities plan to ramp up wind and solar power… The United States would need to construct more than 6,000 projects like the Monticello one in order to run the economy on solar, wind, nuclear or other forms of nonpolluting energy.” “I moved here for nature, for trees, for crops,” said one nearby resident who opposes the project. “I’m not interested in living near an industrial wind farm.”

More Than Half Of Small Restaurants Couldn’t Pay December Rent

“New data finds that fifty-two-percent of small restaurant owners were delinquent on rent in December–a ten-percent jump from November,” reports Nation’s Restaurant News. “Thirty-eight-percent of small businesses say they only have one month of cash reserves currently on hand, marking the worst month in 2022 for cash flow and presenting a greater risk of closure.”

Chef Stephen Sandoval said he still plans to move his Sueños pop-up at Soho House to a permanent space, but an extended stay “will allow him more flexibility,” reports Nick Kindelsperger at the Tribune. “We are very close to closing on a new space,” Sandoval told the paper. He hopes to “be able to open by the end of the summer of 2023. But you never know, because it will need a lot of construction work.”

Sixty migrants were bused by Texas Governor Abbott to Chicago and left here in freezing weather; The Wieners Circle posts on Instagram about meals it provided.

“Urbanspace is bringing the gourmet sausage slinger back, less than a month after closing in Portage Park,” reports Eater Chicago. Hot Dog Box’s Bobby Morelli will open “steps away from Daley Plaza” on Monday, January 9. “As a creative and an artist, I feel like I can push the envelope a little bit more in this new spot,” Morelli says. “I can expand the horizon of how we enjoy hot dogs.”

While walk-up customers can still use currency, starting January 16, Portillo’s locations will not accept cash at its drive-throughs, “aiming to speed up the ordering process and provide more safety for employees,” reports NBC 5.

Bowie Ball At Metro For Seventy-Sixth Trip Around Sun

All The Free Days At Chicago Museums This Month

NBC 5 has a rundown of January free admission museum days.

Sixty-four workers have been laid off by Howard Brown Health, with workers warning the LGBTQ organization of “more burnout and turnover.” Employees accused the organization “of violating labor law as they push for a union contract and said the layoffs reduce critical health services for vulnerable people. Organization leaders say they are trying to close a $12 million shortfall,” reports Block Club.

According to state rep Kam Buckner, reports Capitol Fax, “the demands the Bears are making boil down to a $6 billion privately held company that doesn’t want to pay taxes… Giving the Bears another gift-wrapped subsidy should not be on our list of priorities. Are the Bears ready to look taxpayers in the face and say why they deserve funding that could be going toward public safety, education, and essential services? They wouldn’t dare, so they should stop asking for it behind closed doors.”

Chicago-area figures are not broken out, but the Wall Street Journal reports that “Salesforce Inc. is laying off ten-percent of its workforce and reducing its office space in certain markets, extending a brutal period for tech job cuts into the new year. Salesforce co-chief executive Marc Benioff said that the cuts come as many of the company’s customers are taking a more cautious approach to spending. ‘The environment remains challenging and our customers are taking a more measured approach to their purchasing decisions.’ Benioff said. The business-software provider hired too many people as revenue surged earlier in the pandemic… The corporate mea culpa for overhiring has become a recurring message in recent months at tech companies as executives realized that some of the hiring they undertook to keep pace with soaring demand for all-things-digital early in the pandemic left them overstaffed as the business environment soured.”

Utility operator Exelon has named Calvin Butler Jr. the company’s president and CEO, “making him among the leading figures in Chicago business,” reports the Sun-Times. “Butler, fifty-three, is the first African American in that job and currently the seventh Black CEO of a Fortune 500 company… The announcement quieted speculation that Exelon might move its headquarters out of Chicago. In fact, no headquarters move was being considered.”