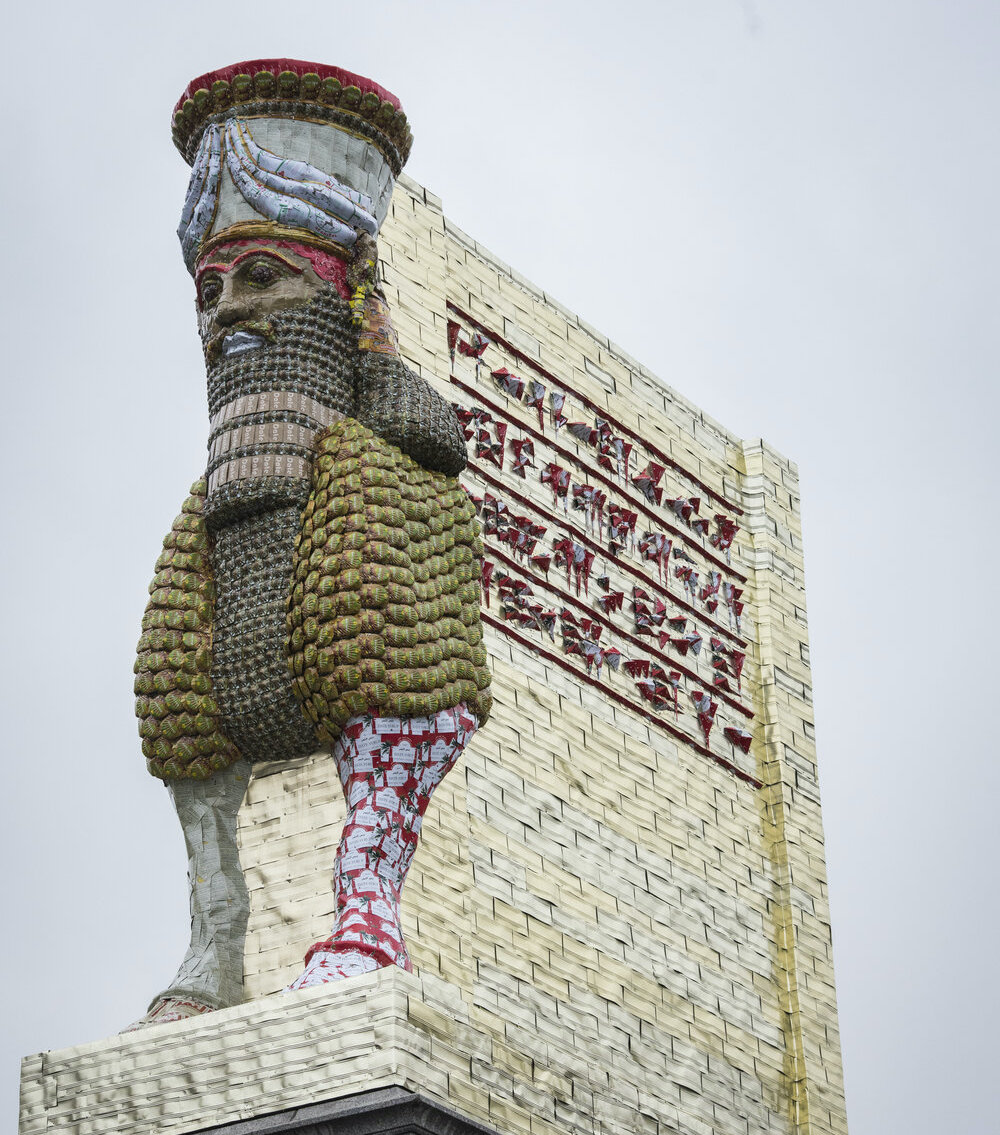 “Iraqi-American artist Michael Rakowitz has proposed in a letter to the British Museum that it return one of its ancient Assyrian treasures to Iraq in exchange for the donation” of a sculpture of his that had been displayed on a Trafalgar Square plinth, reports The Guardian. As part of the deal, “the British Museum would return one of its two Assyrian lamassu sculptures… Rakowitz said the British Museum initially dismissed the idea when he first suggested it in 2020. He was told the museum had helped to produce replicas… ‘I thought to myself, this is fucking insane. Where’s the dignity of sending back these things that are basically a husk of the original?'”

New York’s Whitney Museum of American Art has hired artist, writer, activist, and educator Gregg Bordowitz as the new director of its Independent Study Program, reports Artforum. “Bordowitz, a 1985-86 alumnus of the program and a visiting faculty member there for many years, succeeds founding ISP director Ron Clark, who is retiring after more than five decades.” Bordowitz “taught at the School of the Art Institute of Chicago. He arrived there as a professor twenty-five years ago before rising to chair the department of film, video, and animation and then, in 2013, to founding director of the school’s low-residency master of fine arts program.”

Lumber and aluminum costs are at the top of the list of now-expensive artistic materials, reports Hyperallergic. “When China shut down manufacturing and shipping ports due to the pandemic, many artists felt it before American cities followed suit. Subsequent labor shortages, stranded shipping containers, and Russia’s invasion of Ukraine have [had further impact on the] commodity trade with higher prices and unpredictable access to goods. Artists have substituted, reduced, and even harvested materials from existing artworks to maintain their practice among supply uncertainty.”

The “overwhelming glare” from an immense lit Salesforce logo atop the new sixty-story Wolf Point Tower blinded neighbors, reports Block Club, leading to Ald. Brendan Reilly asking the building “to dial down the brightness” and shut it off at 11pm each night.

The Lowe’s home improvement chain is “offering in-store kids’ birthday parties at ten of its more than 2,000 locations.” Party central for the Chicago area is in Naperville, on Illinois Route 59. The “Build a Birthday” “program aims to to ignite creativity in inspiring young builders while they celebrate with their pals… Young partygoers will have the choice to build projects including wooden castles, race cars and custom wall shelves,” reports NBC 5.

After months of neglect and leasing information slapped into the window, it’s official: the CVS in the Home Bank and Trust Building at Ashland, Division and Milwaukee will close on March 7, reports Block Club. The closure is part of CVS’ plan since 2021 to shutter 900 stores over three years. “The Home Bank and Trust Company Building is a prominent landmark on Chicago’s Polish Triangle, which was once the epicenter of the city’s Polish community.”

“According to a report from the Chicago Coalition for the Homeless, an estimated 65,611 people experienced homelessness in Chicago in 2020, an estimate [which] takes into account people living doubled up or temporarily staying with others,” reports the Tribune. “Advocates offer a couple of reasons for why more people are seeking shelter at O’Hare.” Sarah Boone of the Chicago Housing Initiative says there are “three realities facing the homeless population right now: the number of beds in homeless shelters was decreased at the beginning of the pandemic and never restored, migrants who have recently arrived in Chicago are increasingly using homeless shelters as well, and homeless shelters across the city are overwhelmed.”

Why Eggs Are Dear

Why are eggs so expensive? “Just a year ago, a dozen large eggs ran an average of $1.79” and stood at $4.25 on January 13, reports the Tribune. “Chicagoland bakeries and restaurants are also feeling the pinch, and are looking for ways to make up for the higher price of one of the most basic food ingredients… Experts attribute the price to several factors, including inflation and higher egg consumption.” Avian flu is rampant too, killing “fifty-seven million birds in commercial and backyard flocks across forty-seven states.” And: “some egg companies are seeing record profits amid the price hikes.” From WNYT: “It takes six to nine months for a new generation of healthy hens to reach egg-laying maturity. For an egg pricing dilemma to extend beyond that might not be easy for consumers to swallow.”

“The U.S. Department of Justice has opened an investigation into operations at the Abbott Nutrition infant formula plant in Sturgis, Michigan that shut down over sanitation problems early last year, causing a lengthy and widespread infant formula shortage,” reports the New York Times.

The Music Box Theatre has pulled the February 2 booking of a low-budget movie, “Actors,” Sun-Times contributor Ryan Zickgraf reports, “following tweets that accused the film of ‘transphobia’ and ‘fascism.'” (From the tweet in question: “a movie by fascists about how transness is ridiculous and they need to cancel the screening before they bring these anti-trans bigots to Chicago.”) The showing would have been accompanied “by its two New York-based stars and creators: real-life siblings [who] call their movie a ‘hybrid docu-fiction satire,’ with one of them ‘as a twisted meta version of himself, an actor and indie filmmaker who decides to re-identify as a woman to gain attention in the art and entertainment world.'” The Music Box did not comment. While not directly addressing “Actors,” the Siskel Film Center’s director of programming Rebecca Fons told Zickgraf, “The process of cancellation, in my experience, is taken with great care and involves artists, audiences, and administrators.” “We’re All Going to the World’s Fair” filmmaker Jane Schoenbrun posted a tweet asserting that “institutions like the Music Box shouldn’t be platforming a work that ‘I and many in the trans film community believe to be a clear transphobic dog whistle.'”

“Des Plaines Theatre operator Ron Onesti said he received threats amid the controversy over the February 8 Awake Illinois event,” reports the Tribune. The “speakers panel was to be hosted by Awake Illinois, a group that opposes gender identity and sexual orientation instruction in schools, and which has criticized kid-friendly suburban drag shows as ‘perverted.'” Onesti said that “he didn’t seek out and doesn’t know the people in Naperville-based Awake Illinois, but supports free speech, and would have rented the venue out to pro-LGBTQ groups as well… ‘I do not take sides,’ Onesti said in a written statement. ‘What saddens me was the amount of hate that surfaced during all of this. People mailing bullets to me, asking their neighbors to fill my garbage cans with dog feces, countless hateful calls and outwardly targeting the Des Plaines Theatre, wishing its demise.'” “He did not report it to police,” the Trib adds of the alleged threats against the Des Plaines-owned venue. From the Sun-Times: “Onesti described himself as a proponent of the First Amendment and said Awake Illinois has the right to hold meetings and discuss the issues it pleases. ‘It’s not for me to be judge and jury.'”

“Cineworld detailed the plan to reject the leases starting February 15 in a new bankruptcy filing on Tuesday. Regal is the second-largest cinema chain in the US, behind AMC, with over 500 theaters,” recounts Business Insider. The thirty-nine screens include Union Square Stadium 14, once one of the nation’s highest-grossing, but likely a high-rental location. Two Chicago-area theaters will break their leases: the Bolingbrook Stadium 12 and the Round Lake Beach Stadium 18.

Debt is due for Twitter, reports Bloomberg. Elon Musk and others say that the overextended, embattled microblogging service “has more than enough money to make its first interest payments, expected to total about $300 million. But with the payment date fast approaching, there’s nevertheless some anxiety over what the impulsive billionaire might do to ease [a] $12.5 billion debt burden.”

”Longtime Chicago radio host Lin Brehmer has died. WXRT, where Brehmer was a disc jockey and hosted morning programs, reported the news that Brehmer died early Sunday,” reports Rick Kogan at the Tribune. “Terri Hemmert informed listeners of his death at the end of her ‘Breakfast with the Beatles’ program and made a statement, in part, that ‘we must inform you that we all lost our best friend. Lin Brehmer fought cancer as long as he could. He passed early this morning, peacefully, with his wife and son by his side.’”

Gigantar Arrives On Route 66 In Joliet

“The largest handmade guitar sculpture ever created was mounted at the Illinois Rock & Roll Museum on Route 66 in Joliet,” reports CBS Chicago. “Rick Nielsen of Rockford’s Cheap Trick was there to help welcome the twenty-four-foot sculpture known as ‘Gigantar.'”

“Equity, the union for the performing arts and entertainment industries,” reports the BBC, says “that strikes were a possibility as ‘nothing is off the table’… All theater shows could be hit by any [strike], which would take place around Easter if no agreement is reached.”

Some Chicago businesses have been hurt by the lack of flurries, including ski clubs and snowplow operators, reports NBC 5. WIRED writes that it’s getting too hot to manufacture snow: “Some ski resorts rely on machines to keep powder on the slopes. But snow guns guzzle water, are energy-intensive, and need cool temperatures to operate.”