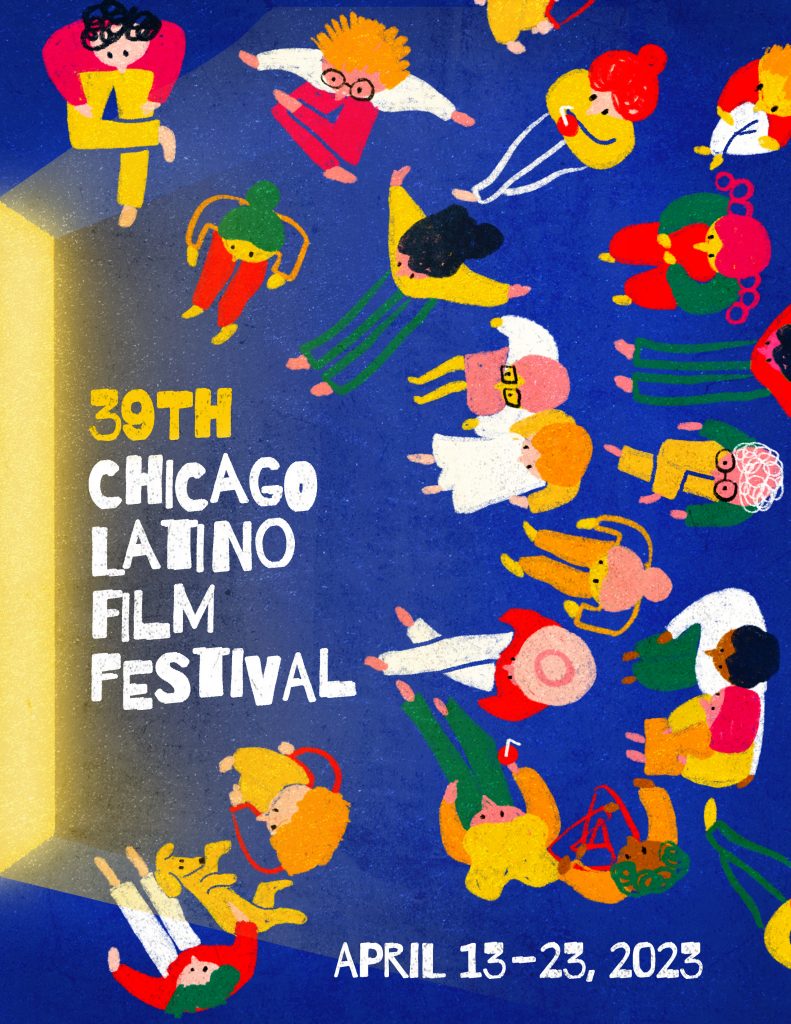 WNDR to Partner With New Vanguard To Present Artists of Color

WNDR Museum, “Chicago’s original immersive art and technology experience,” is partnering with The New Vanguard to present artwork by local BIPOC artists in 2023. This yearlong collaboration will bring featured artists’ stories into a museum space with installations, panel discussions, special events and custom merchandise. Hyde Park artist Nikko Washington will be the first featured artist, opening on February 3 with an immersive installation, “Battle Royale” that “captures monumental moments within the world of boxing through visual, auditory and physical artwork.” Artists for the rest of the year include fashion designer Alex Carter in March; “calligraffiti” artist Timothy Tubs starting in May and fine artist Shani Crowe/Crowezilla in July. More here.

AIA Chicago’s 4,000 members and the general public have access to a revamped website: “It’s packed with new features and resources that allow you to more easily connect with each other and our staff to better serve you.” View it here.

Home Built As Chicago Party House Has Downs And Ups

“As Britt Whitfield and Jacqui Scott began looking for their next home in Chicago, they prioritized one thing… ‘The ability to throw a party was number one,’ Ms. Whitfield said” in a report from the New York Times. When “Whitfield, forty-three, says ‘a party,’ she doesn’t mean a cozy gathering… As the chief executive of the Revel Group, a Chicago-based events company, she spends her days overseeing blowout functions with thousands of guests. While her personal gatherings are more intimate, she still enjoys throwing bashes for big groups… The couple had renovated or built five previous homes in Chicago, moving every couple of years. But now they were looking for a place to stay put… in addition to serving as a party venue… They bought [a Logan Square house and lot] for $1.66 million in June 2018, then called in Filoramo Talsma Architecture and Project Interiors to renovate.”

The new home’s features “blended contemporary urban style with a healthy dose of whimsy.” But: pandemic. But: economy. Yet: recovery. “The work was mostly complete by September 2019, at a cost of about $2 million. That fall, [Whitfield and Scott] welcomed nearly a hundred guests for a housewarming party. ‘The home has features and functions to be able to have parties, but that was sort of robbed from us right away,’ Ms. Whitfield said. At the same time, her events business hit a wall: ‘I basically didn’t have a job.'” The happy ending? No one bought when they tried to sell at $5.399 million, and people are willing to gather again in their Logan Square bastion.

The Northern Illinois Food Bank has introduced the “Food Finder” map, which “leads you to fresh food in your community,” reports CBS 2. “The map connects people to over 900 food pantries, mobile food truck markets, and soup kitchens by ZIP code and address.” (Resources are available in several languages.) The map is here.

Tejal Rao On The “Uncertain Future” Of Fine Dining

“Recent reports have spurred a backlash against the one percent of restaurants. What is the human cost of this type of eating, and will it last?” explores critic-at-large Tejal Rao at the New York Times. “Fine dining itself isn’t really the problem. The problem is that at too many restaurants where dishes and service are constantly improved, revised and perfected—restaurants that are meant to represent the best—the old, ugly conventions of the business are rarely reimagined or repaired. They are only replicated… A less opulent and more humane kind of fine dining, which aims to make people feel special with simpler, significantly more affordable menus, can and does exist… The genre is far more open to interpretation than any international list or award system might suggest.”

Same Day Cafe has “launched a dinner menu crafted by chef Jazer Syed, who was most recently the chef-in-residency at Theaster Gates’ Retreat at Currency Exchange Cafe,” reports Block Club. “Syed’s menu, available 5-9pm on Tuesday-Saturday, is a reflection of his Indian and Filipino roots and Midwestern upbringing. Dishes include garam masala carrots with labneh ($13), lamb kefta kabob with house roti ($18), a house corned beef Reuben ($14) and spinach and artichoke dip ($14).”

Pea protein hasn’t changed the world, reports Bloomberg: “After Beyond, Impossible and their copycats spent years trying to seduce everyone away from meat, it appears their best customers are, well, the five-percent of the population who didn’t eat meat in the first place… Beyond Meat and Impossible Foods wanted to upend the world’s $1 trillion meat industry. But plant-based meat is turning out to be a flop.”

“Workers are seeking higher pay and more of a say in staffing and scheduling decisions,” reports the Tribune. “The Gold Coast baristas are the first La Colombe coffee shop workers in Chicago to unionize; their vote comes after employees at one of the company’s D.C. locations voted to unionize in December.” A total of four of five locations have votes in the works.

The Trib tracks average prices for eighteen staples including eggs, milk, bacon, beef, bananas, beer and wine in the Midwest Census Region, which includes Illinois and eleven other states. Charts are the order of the day, without analyzing behind-the-scenes factors such as corporate consolidation and profit-taking. A second piece looks at the tripling and quadrupling of egg prices and its effect on bakeries and restaurants.

CNN on Cal-Maine Foods, Inc.: “A spike in egg prices has squeezed customers. But even with rising costs of its own, the leading U.S. egg supplier has found that it can make even more money out of every egg. The egg shortage has enabled record quarterly profits and sales at Cal-Maine Foods, the largest producer and distributor of eggs in the United States. The company produces brands such as Farmhouse Eggs, Sunups, Sunny Meadow, Egg-Land’s Best and Land O’ Lakes eggs. Cal-Maine’s profit increased sixty-five-percent to $198 million during the three months ended November 26 from a year ago.” The group Farm Action breaks down a range of factors behind the astronomical price hikes in a letter to FTC Chair Lina Khan here.

Chicago-based CMP continued its run as a leader in supporting nonfiction filmmaking, as three films programmed within CMP’s flagship program, the Doc10 documentary film festival held each spring in Chicago, were among the five nominees announced on Tuesday morning by the Academy. This year’s Doc10 selections nominated for Best Documentary are “Fire of Love,” Sara Dosa; “A House Made of Splinters,” Simon Lereng Wilmont; and “Navalny,” Daniel Roher. CMP supports films through multiple programs including the Shifting Voices Film Fund, which launched in 2022 and raised more than $100,000 to support BIPOC filmmakers. Applications for 2023 Shifting Voices Film Fund participants are open until January 31; the eighth Doc10 documentary film festival will be held in May 2023. More here.

The Elevate Prize Foundation has announced Elijah McKinnon [Newcity Film 50], co-founder and executive director of Chicago’s nonprofit platform Open Television (OTV), as a recipient of its third-annual Elevate Prize, an award presented to twelve “social entrepreneurs and changemakers working to solve pressing issues around the world,” with a total of $5 million in awards. “Founded in 2019 by Joseph Deitch, The Elevate Prize Foundation aims to ‘Make Good Famous’ by partnering with rising activists and social entrepreneurs and providing them with resources to raise visibility of their work, multiplying their ability to mobilize support–whether online or on-the-ground. The winners of the Elevate Prize each receive a minimum of $300,000 in funding, as well as leadership development services, social media training, mentorship and other support needed to reach a wider audience.”

Says McKinnon,”The Elevate Prize provides a reminder to those who reside at the corner of change and equity that we are more than our labor. I’m beyond proud to be a part of a global cohort that believes in a future filled with bravery and compassion.” McKinnon “uses their decade of expertise in brand strategy, media production and global health marketing to sustain OTV’s mission, which is anchored in artist and community development.” For the Film 50 in December, McKinnon told Newcity, “We are all born with special gifts and those gifts bring value to any space that we choose to occupy. In order to repair an industry that has perpetuated so much harm, it is imperative for us to build collective power that is rooted in nourishment, kindness and coalition.”

The brainchild of CEO and founder of Camera Ambassador Erica Duffy [Newcity Film 50] and editor-in-chief and founder of Cinema Femme Rebecca Martin Fagerholm [Newcity Film 50], The Call Sheet, is a new Chicago publication spotlighting filmmakers’ movies, working on set, and the creative process. It has just as launched in print, or you can read it online here.

“With over 970 submissions received from all over the world, Los Angeles-based graphic designer and illustrator Chenwei Xu is the winner of the Thirty-Ninth Chicago Latino Film Festival’s annual poster competition! Featuring a diverse group of people gathering around a glowing screen, Chenwei’s design celebrates the communal experience of watching a movie whether in the theater, outdoors in a park or even at home with friends and family members,” the festival announces. “After taking baby steps last year towards a full theatrical experience with a limited number of in-person screenings at the Landmark Century Center, this year we are fully back at the theaters. We are currently finalizing the program.” More here.

More Restrictions Against Books In Schools

“Teachers in Manatee County, Florida, are being told to make their classroom libraries—and any other ‘unvetted’ book—inaccessible to students, or risk felony prosecution,” reports Judd Legum at Popular information. The “policy is part of an effort to comply with new laws and regulations championed” by Republican governor Ron DeSantis. “It is based on the premise, promoted by right-wing advocacy groups, that teachers and librarians are using books to ‘groom’ students or indoctrinate them with leftist ideologies… A rule passed by the Florida Department of Education last week states that a ‘library media center’ includes any books made available to students, including in classrooms. This means that classroom libraries that are curated by teachers, not librarians, are now illegal.” More details here.

“The entire 93XRT family is remembering your best friend in the whole world with stories, memories, and music”: listen to your choice of segments here or the entire multi-hour block of programming.

Chicago Tap Theatre is celebrating its twentieth anniversary with “Chicago Tap Theatre at 20: Tempo, Rhythm and Time.” The celebratory performance features classics from its two-decade history, including two world premieres as well as pieces that have not been seen in Chicago since their debut. The group will revisit pieces from early choreographers that shaped the Company, including Mark Yonally, Rich Ashworth, Kirsten Uttich as well as new works from Heather Cornell, Tré Dumas, Sterling Harris, Molly Smith and Mark Yonally. Past dances include Molly Smith’s groundbreaking “Protect Trans Kids” and Mark Yonally’s “Somebody to Love,” which premiered in Chicago Tap Theatre’s 2016 Pride Show. As in the original production, the Chicago Gay Men’s Chorus will join Chicago Tap Theatre for “Somebody to Love.” Performances are Saturday, February 18 and Sunday, February 19 at The Den Theatre in Wicker Park. More here.

United States Artists—a Chicago-based arts funding organization that has awarded more than $38 million to artists across the country since 2006—has announced its 2023 USA Fellows. Among the forty-five recipients are Chicago-based artists: Luis Alvaro Sahagun Nuño, Ayako Kato and Cristal Chanelle Truscott. Each honoree will receive an unrestricted $50,000 cash award. “Individual artists will themselves decide how to best use their $50,000, whether that may be creating new work, paying rent, reducing debt, obtaining healthcare, or supporting their families. As the organization’s flagship program, the unrestricted nature of the USA Fellowship reflects a mission to provide unconditional support and greater agency to individual artists. USA also provides each artist access to individualized financial planning, a tool that has been so beneficial to fellows in recent years that USA is now experimenting with adding access to lawyers, career consultants, and other professional services on request.” More here.