Click on any cover below to view the digital edition of the publication.

To subscribe to Newcity for monthly delivery or purchase back issues, visit our online store.

Newcity kicks off the new decade with The Players 50, our annual look at the leaders in the worlds of theater, dance, comedy and opera in Chicago. On the cover is our Player of the Moment: Wardell Julius Clark, an artist and activist who shares insights from his time on stage and behind the scenes. In case that doesn’t slate your thirst for performing arts coverage, we also have a Winter Preview, highlighting more than 30 productions premiering in the back half of the 2019-2020 season. Elsewhere in the issue: fashion outlets bring the art to the people, a curious performance by Aura CuriAtlas, the Virtue of Erick Williams, and much more! 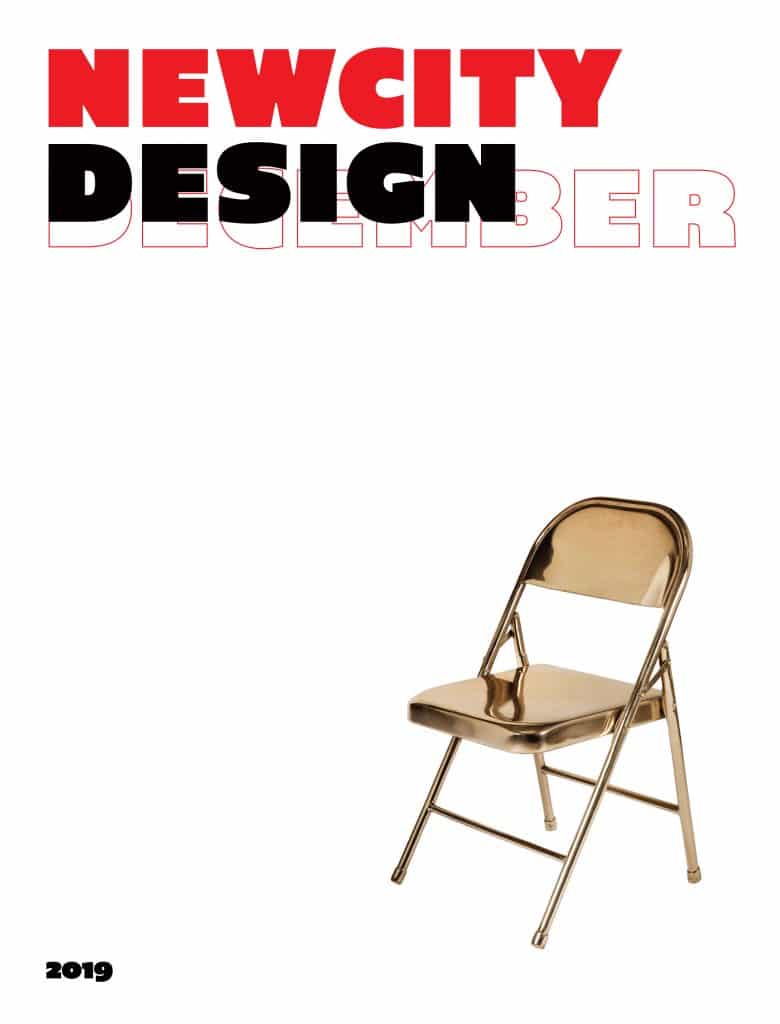 Newcity’s Designed Objects issue features interviews with local designers on utilitarianism versus exploration, market research, retail placement, and more. Additional featured content includes a conversation with Tom Vacek on Barry Bursak and a guide to gift buying for the design obsessed, including an El-themed board game. Elsewhere in this issue: the story of “La Esperanza” at that National Museum of Art in Pilsen, where to bring your appetite during the Feast of Seven Fishes, a holiday residency at City Winery, and more!

November marks the return of Newcity’s Best of Chicago issue: our annual guide to the best of everything in the Windy City. This year we focus on “made-in-Chicago,” from deep dish to deep house with hot takes and mild sauce. Also featured: robot tourism, Lucky Plush laces up its skates, the next generation of storefront theaters, the history of the Farnsworth House, and more!

Newcity’s October issue features the Film 50, our annual survey of the city’s filmmaking world. Film Editor Ray Pride interviews the Film Leaders of the Moment: Kwame Amoaku and Peter Hawley, the new heads of the Chicago and Illinois Film Offices, respectively. Also in this issue: Lee Bey looks to get some exposure for Chicago’s south side, the Chicago International Film Festival turns 55, dining is a drag at LIPS Chicago, a spirited defense of Irish whiskey, and more! 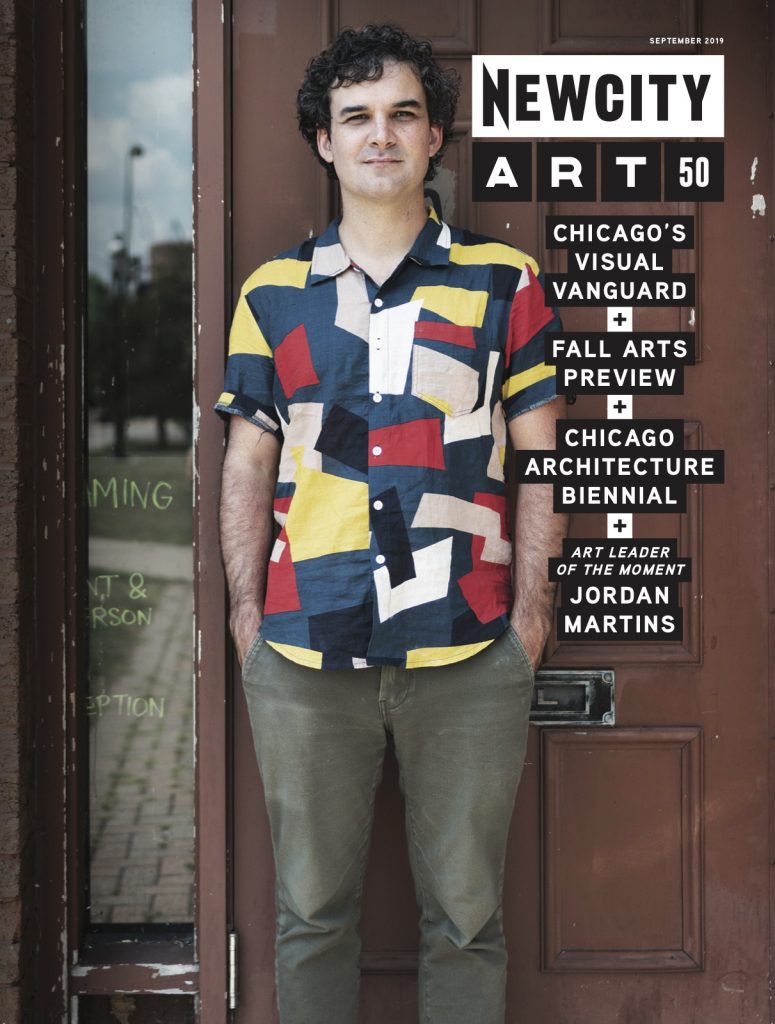 Arriving at the peak of summer, Newcity’s August issue features our annual Music 45, a survey of the folks who keep the bands playing in Chicago and beyond, as well as a profile of our Impresarios of the Moment: the members of Chicago Independent Venue League (CIVL), who have assembled in order to defend the city’s independent musical landscape against developers Sterling Bay and international entertainment monolith Live Nation. Speaking of breaking ground on disputed territory, Tara Betts interviews veteran music critic Jim DeRogatis about his new book “Soulless: The Case Against R. Kelly.” Also in this issue: jewelry designer Giselle Gatsby and her high-profile collaboration with Virgil Abloh, Newcity Film Editor Ray Pride celebrates the Music Box’s 90th birthday, art and activism combine in a new initiative at Red Clay Dance, and much more!

Newcity’s July edition is an urban pastoral with ruminations, essays, and poems about our city at its most abundant. This issue is all about the green: grass underfoot, plants at the office, and a little herb in your glass. Also: fresh faces at Black Box Acting, Chicago as a global arts hub, the literary multitudes of Aleksandar Hemon, and more! 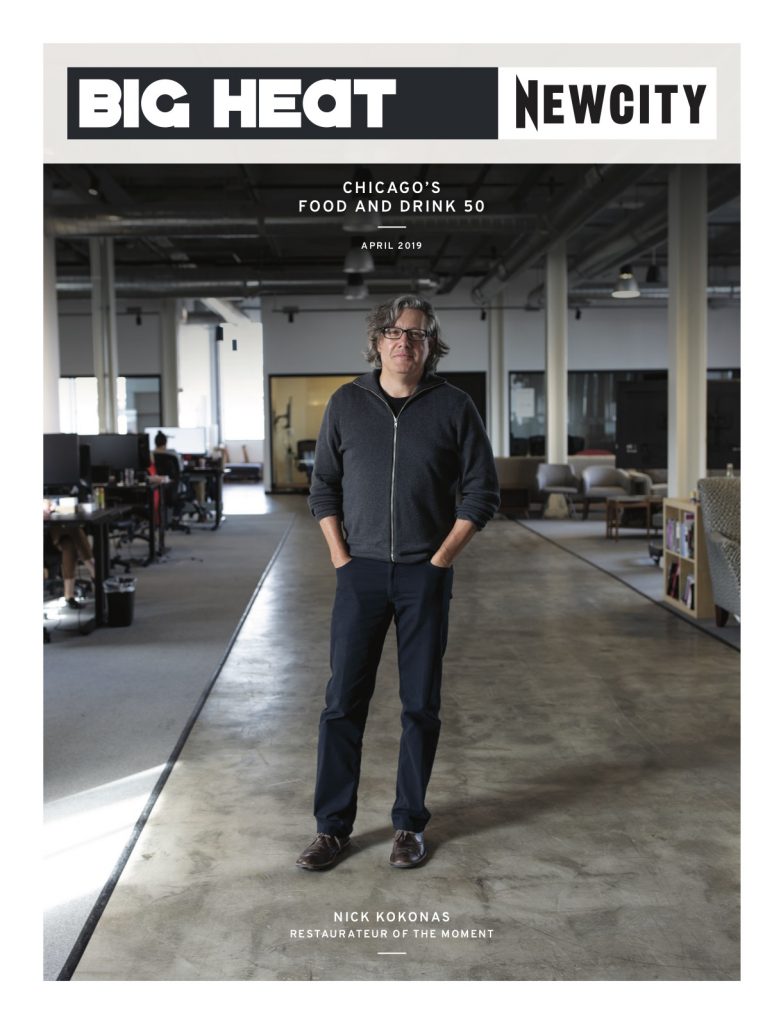 Newcity’s March Issue features the Design 50: our annual celebration of Chicago’s design doers, who make our world work when it does. Design editor Vasia Rigou interviews Michelle Boone, Chief Program and Civic Engagement Officer at Navy Pier and our Designer of the Moment. Mark Guarino reports on the troubled state of the Old Town School of Folk Music. Also: Dawoud Bey at the Art Institute, “lost” restaurants, Harmony Korine as a listicle, a rising star in storefront opera, and much more!

In honor of the publication’s thirty-third anniversary and this month’s mayoral election, Newcity polled a variety of visionaries about their one big, bold idea for the future of Chicago. From a renaissance on the South and West sides to instituting a four day work week, this issue has plenty of fresh ideas for whoever ends up running the city. Also: 100 Years of Bauhaus, going to the beach in February, vegan tasting menus, what’s in store during the Year of Chicago Theatre, and much much more!

Newcity’s first issue of 2019 features our annual look at the leaders in the worlds of theater, dance, comedy and opera in Chicago. On the cover is our Player of the Moment: Roell Schmidt and the staff of Links Hall. The organization is turning forty this year with Schmidt at the helm for the last ten. The issue also introduces the first ever Hall of Fame, celebrating Players who are so consistent and whose institutions so regularly present in past issues that inclusion is a foregone conclusion. Elsewhere: kombucha, scotch, puppets, dramaturgs, tribute bands, and more! 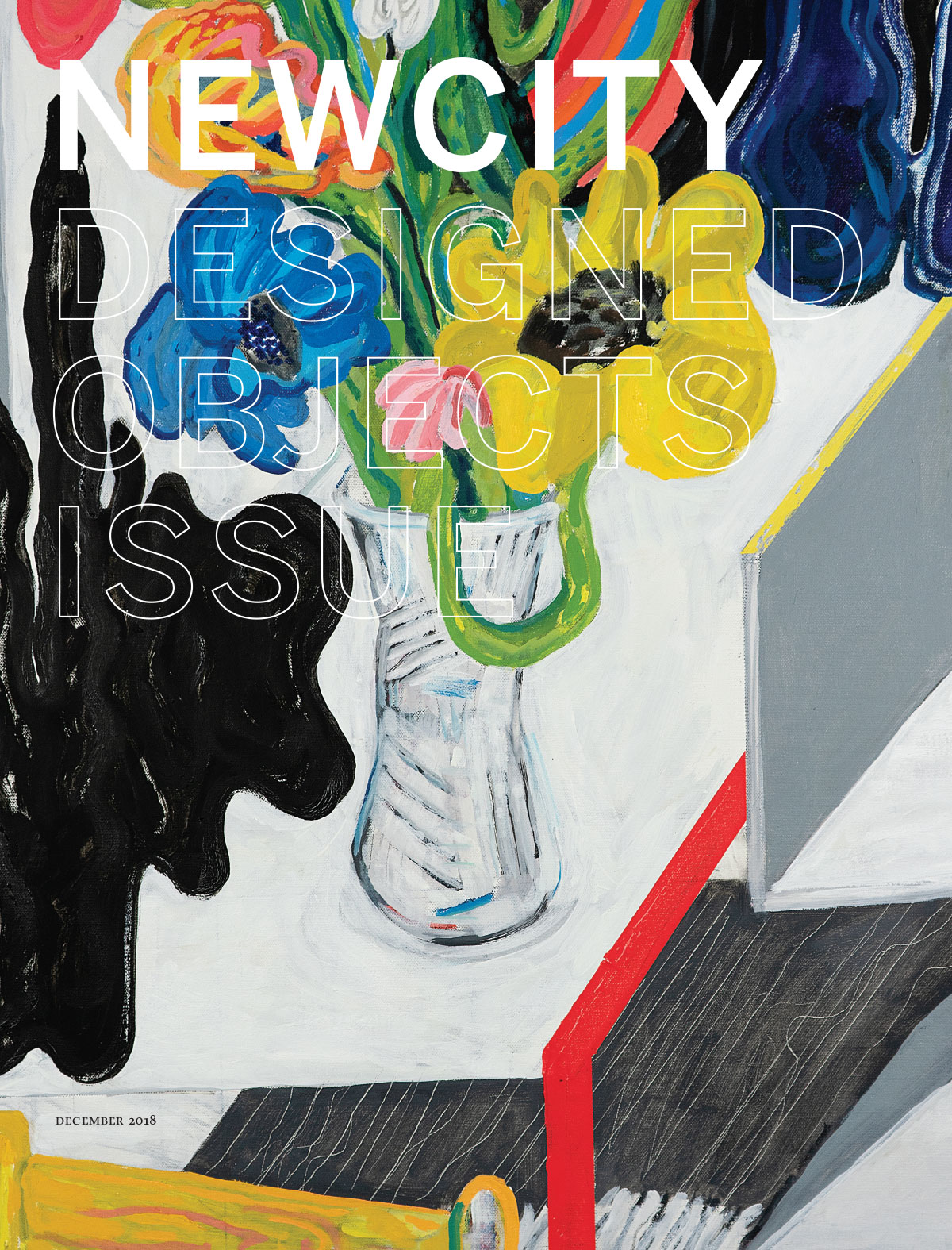 Newcity’s December issue nine designers each pick a designer you ought to know about. Additional features include a glimpse inside a new Tadao Ando-designed exhibition space, an interview with poet Ruben Quesada, a game-changing new album from Shemekia Copeland, an intimate new film from Alfonso Cuarón, and more. 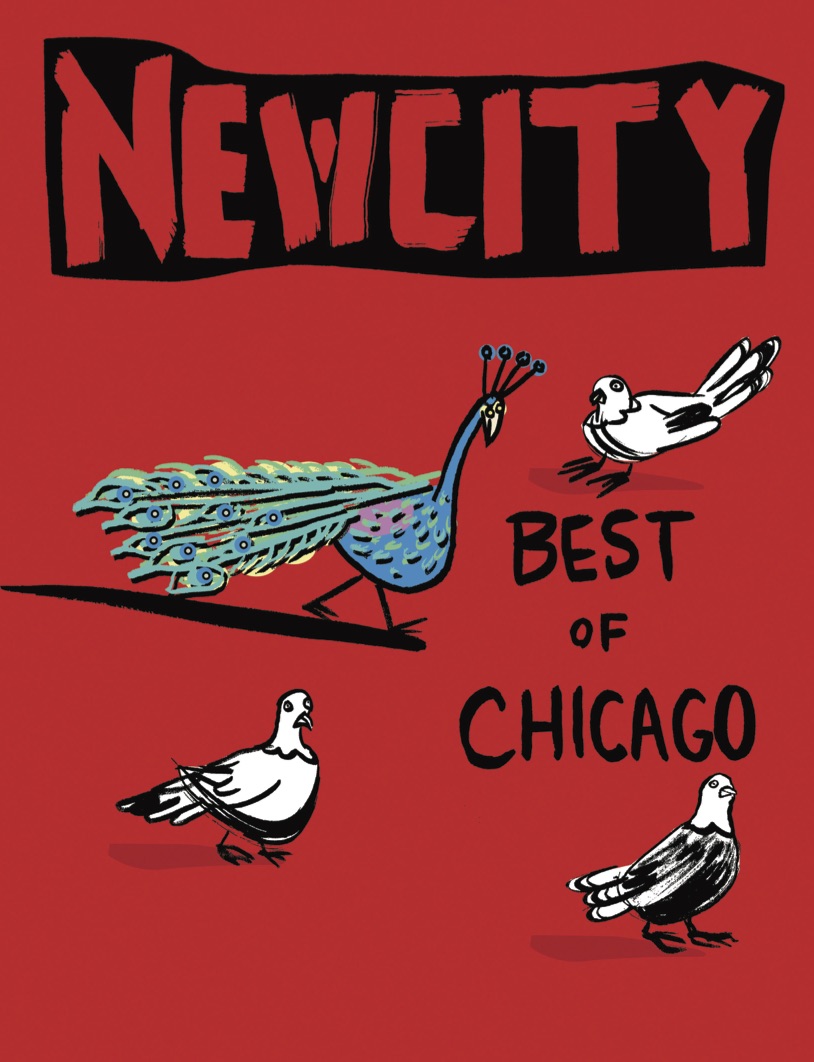 Newcity’s November issue sees the return of our legendary Best of Chicago edition, now in its 26th year, which features dozens of our picks on the best of city life, spanning arts and culture, food, politics and more. The issue also includes poems by seven Chicago writers.

Newcity’s October issue features our annual survey of the city’s filmmaking world, the Film 50, including an interview with documentarian Bing Liu, whose recent “Minding the Gap” is reaching wide audiences with an important message. David Hammond takes an in-depth look at Chicago restaurants taking initiative to help the food-insecure. The issue also includes a conversation between Hans Ulrich Obrist and Dominick Di Meo on personal Chicago art history.

Newcity’s September issue features our fall art preview – our guide to the best programs, performances, exhibitions and events of the new season. It also includes our annual survey of the city’s visual art world, the Art 50, featuring Rashayla Marie Brown as the artist of the moment. The issue also features an interview with architect Marshall Brown, focusing on his time in Chicago as he prepares to depart the city for a position at Princeton. We also profile beachcomber John Soss, who collects objects on the shores of Lake Michigan.

Newcity’s August issue features our annual Music 45, a survey of Chicago’s rich musical talent, and a profile of the Musician of the Moment, Jean Deaux. It also includes a feature on Chicago’s growing Netball community, a look at the restoration of Mies’ McCormick House, an interview with Kim Brooks on parenting in this age and a feminist guide to Lollapalooza.

Newcity’s July edition is our annual summer issue, with ruminations, essays and poems on the city’s most active season. The issue also features a story on the amazing comeback of Thai and Danielle Dang at HaiSous, a look at the major visual arts triennial coming to Cleveland and a celebration of the singular charms of SummerDance.

Newcity’s June issue follows the Chicago Artists Coalition as it relocates from the West Loop to a new home. This edition also includes our annual look at the city’s influential writing community, the Lit 50: Who Really Books in Chicago, including writer of the moment Rebecca Makkai. The issue also features an interview with the Chicago Film Office on this summer’s Millennium Park Summer Film Series, which is partnering with programmers from film festivals across the city to showcase important films.

Newcity’s May issue features our annual look at the city’s emerging visual arts talent, Breakout Artists: Chicago’s Next Generation of Image Makers. The issue also includes an interview Chicago playwright Ike Holter, as well as a conversation with women in Chicago music.

Newcity’s April issue includes our annual feature on the city’s vital culinary culture, Big Heat: Chicago’s Food & Drink 50. We also interview Diana Dávila, chef-owner of Mi Tocaya Antojería, whose restaurant was cited as “one of the reasons we declared Chicago the restaurant city of the year” in Bon Appetit magazine in 2017. Michael Workman interviews Daniel Borzutzky, a National Book Award-winning poet and translator, on his new collection, “Lake Michigan.”

Newcity’s March issue includes our annual look at the city’s vibrant design and architecture worlds, Design 50: Who Shapes Chicago. We also look at the practice of Ann Lui of Future Firm, who’s part of the curatorial team representing the United States in the U.S. Pavilion at the 2018 Venice Architecture Biennale. Ray Pride tells the story of Kartemquin’s making of their new series, “America To Me.”

Newcity’s February issue celebrates our anniversary with three stories centered on the future: an exit interview with serial entrepreneur Howard Tullman, who was instrumental of 1871 and its place in the local tech ecosystem, a firsthand look at everything learned about filmmaking in the production of our first feature film, Signature Move, and a feature on Cure Violence Chicago and other organizations looking to treat gun violence as a public health issue.

Newcity’s January issue features our annual look at the leaders of the theater, dance, comedy and opera worlds of Chicago. Another feature includes an interview with Alicia Eler, art critic for the Star-Tribune, on her upcoming book covering our national obsession with “selfieness.” The issue also highlights three organizations – Chicago Inclusion Project, Not In Our House and The Chicago Theater Accountability Coalition – at the forefront of the growth of activism in our theater community.

Newcity’s November issue is our influential Best of Chicago edition, now in its 25th year. This edition of Best of Chicago features not only a look at the best the city has to offer in 2017, but a look back at what’s changed and what hasn’t over the 25 years we’ve published the issue.

Newcity’s October 2017 issue features an interview with cinema legend and activist Shabana Azmi, a feature on the Mayan influences on Frank Lloyd Wright’s architecture, a profile of Aymar Jean Christian and his work at Open TV and the Film 50, a look at the behind-the-scenes forces in Chicago’s film community.

Newcity’s September issue includes highlights of the fall season from some of Chicago’s top cultural figures, a look the leading curators, gallerists administrators and more from the city’s visual arts ecosystem, an interview with Deana Haggag, the new CEO and President of United States artists, on the state of arts funding today and a look at the coming edition of the Chicago Architecture Biennial.

Newcity’s official guide to EXPO CHICAGO includes a feature on David Hartt’s new exhibition at the Graham Foundation in partnership with the Chicago Architecture Biennial, a look at the new Derrick Adams exhibition at Stony Island Arts Bank and an interview with Naomi Beckwith of the MCA and Romi Crawfod of SAIC on viewing contemporary art through social media. It also includes our comprehensive guide to EXPO CHICAGO, including the participating galleries, EXPO ART WEEK events, IN/SITU programming and more.

Newcity’s August 2017 issue features the Music 45: Who Keeps Chicago in Tune, a look at the music community being built at Fort Knox and 2112, a few critics’ takes on the best way to navigate Lollapalooza, a feature on the organizers of Masji al-Rabia, a LGBTQIA+-affirming Muslim congregation and a story on Alex Carter, a rising Chicago stylist.