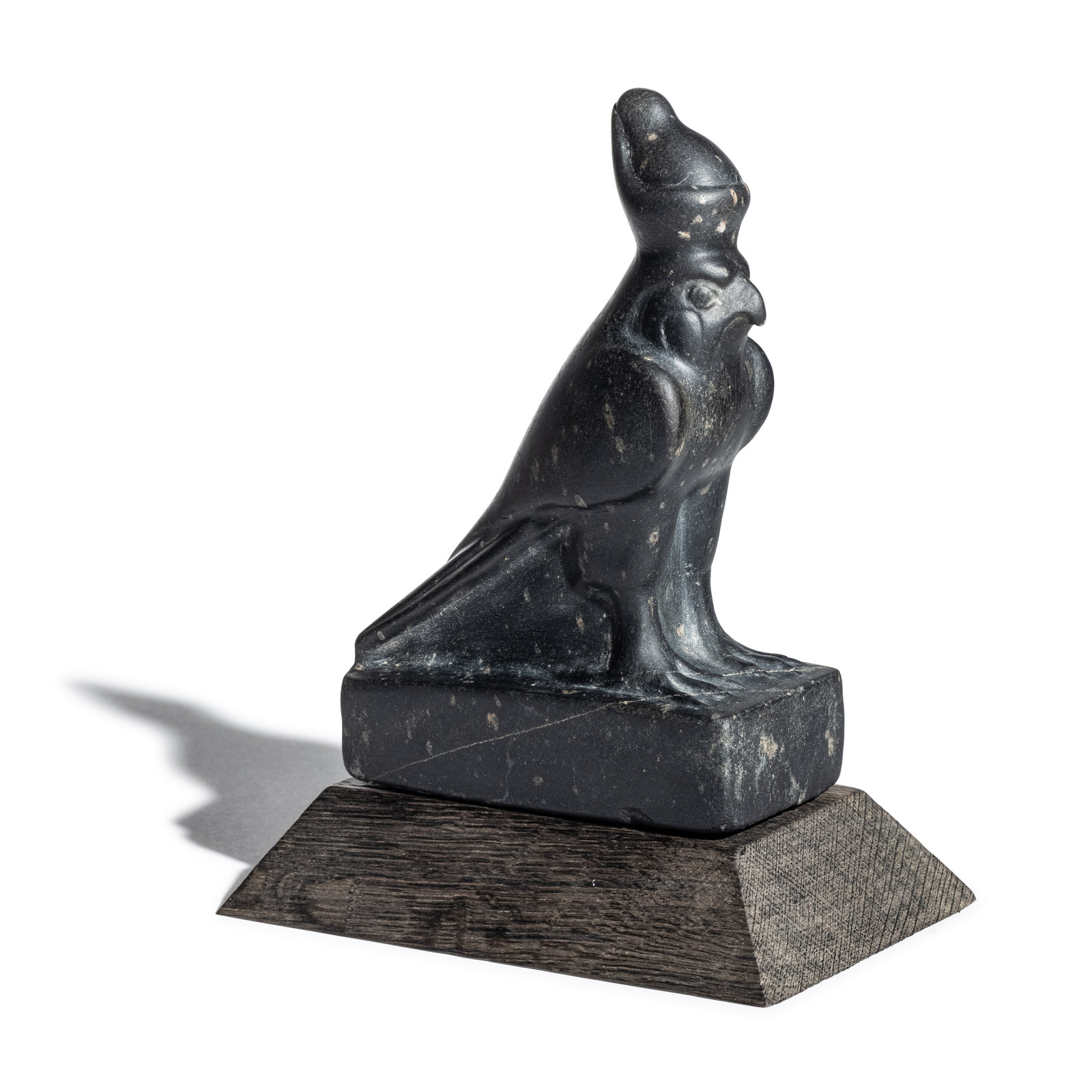 “Workers at the Art Institute’s school and museum say management has used misinformation and intimidation to stall the drive, but museum officials denied the claims,” reports the Sun-Times. “Employees of the Art Institute of Chicago say museum management is trying to hinder their attempt to collectively bargain—and they are demanding officials step aside and allow unionization efforts to proceed without interference.”

Hindman Auctions totaled $1,121,063 in its Antiquities and Ethnographic Art auction on November 18. Figural stone sculptures and portrait heads also saw strong bidding activity. The auction offered rare objects from the fifth millennium B.C. to the twentieth century A.D. and featured outstanding performers including the Collection of Dr. Hernan D. Ruf. The top lot of the auction was an Egyptian granodiorite falcon, which shattered its presale estimate of $7,000-$9,000 to sell for $93,750. “The falcon is seen as a powerful and fierce bird in ancient culture. Bidders recognized value in the fine craftsmanship and overall remarkable condition.”

“The Michigan State Medical Society is decamping from its longtime Minoru Yamasaki-designed headquarters on West Saginaw Street in East Lansing and has put the local icon up for sale for $4.3 million,” reports The Architect’s Newspaper. “The low-and-long 1961 office complex features a late-1970s two-story addition known as the Stockwell Wing that connects to the main building via an atrium and was also designed by Yamasaki Associates. The building is on a well-groomed 3.5-acre suburban campus and was added to the National Register of Historic Places a decade ago.”

A Look At The Restored Lincoln Park Lion House

“Goettsch Partners has announced the completion of the Pepper Family Wildlife Center, a $41 million renovation, restoration, and expansion of the historic lion house at Chicago’s Lincoln Park Zoo,” reports Archinect. “The new 54,000-square-foot facility nearly doubles the size of the previous lion habitat, providing increased transparency and a more immersive experience for visitors. Designed in collaboration with Seattle-based zoo exhibit specialists PJA, the habitat focuses on providing choices for the animals and enhancing wellbeing, from thermal comfort zones for heating and cooling to intricate rockwork and trees for climbing.”

A Farm Is Coming To La Villita Park

“The Little Village community is reaping the fruits of a twenty-year fight for environmental justice with the construction of a farm in La Villita Park,” The Chicago Reporter writes. “The farm, which will span 1.3 acres, will include a community fruit orchard, bilingual urban agriculture training in English and Spanish, and a cooperative portion for vendors and will open in the spring… ‘We’re building a farm to show the community that we can create these green safe spaces that will cultivate financial, mental, physical, spiritual, and emotional benefits,’ group leaders said.”

“Lovers of canned cranberries may have to be flexible this Thanksgiving and opt for fresh because of shortages of the cans used to transport the fruit,” reports Bloomberg. “Ocean Spray, a cooperative of more than 700 farms, was forced to use different cans because of supply chain woes, potentially causing a dearth of cranberries in parts of the country ahead of Thanksgiving Day.”

“Two city departments are investigating possible labor and anti-discrimination law violations at Parlor Pizza’s three locations,” reports Block Club Chicago. “The Department of Business Affairs and Consumer Protection and the Chicago Commission on Human Relations are ‘working to conduct a comprehensive investigation of allegations that workers were not paid for overtime work, that employees were sexually harassed and that customers were discriminated against based on their race and/or age.'”

An extra-alarm fire struck Delia’s Kitchen and surrounding buildings in Oak Park, reports the Sun-Times. “Veronica Ciobotaru, owner of the restaurant, had been taking her first day off in weeks on Tuesday when she got the phone call telling her the building was on fire.” Customer Summer Piggee told the reporter, “We are losing a big institution of not only a business but of really a family—an Oak Park family… I believe everybody who lives here comes to Delia’s at least once a month. They have the best pancakes in the country… Veronica has done so much for this community and we need to support her during this time… Like the Chicago Fire, we can rebuild.”

“One thing that is timely about the movie is yes, it is a comedy, but it is also about loss and grief. And we are all dealing with that,” Violet Ramis Stiel tells the Hollywood Reporter. “It was surreal. There are so many parallels to real life, but it is just a movie. And it is not actually him. It is a character. Jason, smartly, focused on capturing the Egon character and not necessarily my dad. I feel like it really worked in that way. Ultimately, it leaves us with that feeling: The people we love are always with us. They don’t go away.”

The Music Box Theatre Thanksgiving tradition returns this Friday. “For over a decade, Thanksgiving has been celebrated at the Music Box Theatre with the Von Trapp Family Players,” the theater relays. “This annual event has grown with thousands of people joining in on the fun. This fun-filled tradition includes a screening of the classic Julie Andrews musical in glorious Technicolor, complete with subtitles so that the whole audience can sing along. The fun starts before the film, with a vocal warm-up led by the evening’s host and our house organist on the famous Music Box organ. Every member of the audience receives a complimentary Magic Moments Pack, containing props to be used at strategic points throughout the film. Then there is the costume contest, in which everyone who has come in costume is invited onto the stage to show off their tailoring, with a winner chosen by the audience.” Tickets for the six showings here.

Bellissima Opera’s “On Call: COVID-19” has been awarded First Place for Best 2020-2021 Opera Production in its category by the National Opera Association. Recognized for its collegiate premiere performance, “On Call “is a virtual production staged with the look of a Zoom meeting. It captures the inherent stress and fears facing health care workers and the public in the time of a viral crisis, yet rallies with a positive sense of looking forward. “On Call “was created by librettist Christine Steyer of Oak Park, composer David Shenton of Queens, and director Carl Ratner of Kalamazoo. Working In Concert will stream the original, one-hour Bellissima cast production for free from November 28 through January 31, 2022 here.

An estimated ten million households visit Santa each year, reports AP. This year, “Some Santas will remain behind barriers that popped up last year for safety. At Minnesota’s Mall of America, the big man will be housed in a log cabin behind a window with guests seated on benches in front of him. At 169 locations for the outdoor retailers Bass Pro Shops and Cabela’s, benches will also be used, with plastic partitions deployed at some stores for Santa’s photo ops.”

“Mayor Lori Lightfoot addressed concerns about the safety of large public gatherings,” reports WTTW. “Whenever something like this happens across the country, as a mayor you think, ‘Are we protected? Are we safe?’ And we’ve had that discussion…We lock it down because we want to make sure that people can enjoy themselves and do so safely… But we always have to check ourselves and make sure we’re doing everything we can, even when you’ve got somebody clearly determined to do harm, that we literally block their ability to do that.”

“Mihaly Csikszentmihalyi taught psychology at the University of Chicago for three decades and created the concept of the mental frame of mind known as flow, or a state of happiness that is produced when one is performing at optimum level,” reports the Tribune on the professor’s passing. Here’s his TED Talk. The U of C’s obituary is here. “‘Mike had a genius for creating simple, generative models of flow, creativity and aesthetic experience, and then unfolding their implications in his writings; the impact of his ideas has been remarkably broad,’ said Jeanne Nakamura, an associate professor at Claremont Graduate University, where Csikszentmihalyi taught after retiring from UChicago in 1999.”

Crain’s produces a package of cultural perspectives: “What happened when artists lost their audiences? Canceled live performances created opportunities to re-examine, step back and renew creative approaches”; “More investment in nightlife could help Chicago attract residents and businesses: As leaders plan for future growth, they should examine opportunities to keep residents going out—and staying local”; “Halted by the pandemic, creatives sought peace—and something different: Time off for COVID pushed stage managers, actors and musicians into some uncharacteristic directions.”