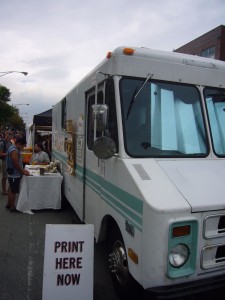 What looks like one of Chicago’s many food trucks is parked among the other artisan tents on the south side of Division near Marion, where a sleek blue glass building home to Prasino, a sustainable new age eatery and lounge of sorts, can still be seen overhead. It’s only half past noon, but it seems clear the crowds at the Ukrainian Village’s Renegade Craft Fair have agreed it is an acceptable time to begin drinking. Lines at the wine and beer vendors begin to form. An influx of new families with strollers, a greyhound, sometimes two, overwhelms the area surrounding Kyle Durrie’s 1982 Chevy step truck—picture a typical ice cream truck—as passersby begin similar mental exercises of trying to discern exactly what this truck is doing at an arts fair.

Finally, they notice the large lunch board sign, which reads, “PRINT HERE NOW,” gesturing to the passenger side of the van, and some decide to invite themselves into “Moveable Type,” Power and Light Studio’s latest experiment. Inside they are surprised to discover that Durrie has converted this blue striped van into a rather cozy but pleasant-looking print shop and living space.

Durrie pokes her head into the room as she happily greets her guests. A quick scan of the map of North America on the left wall complete with more than thirty pinpoints snaking across the South and Midwest reveals that this young Oregonian with a wavy, sandy blond bob might just be the most hard-core artist at Renegade. She’s clearly the only one with a truck full of a few tons of moveable type equipment and a nine-month itinerary.

Durrie scoots past her guests to answer questions about her operation and experience. “This one here,” she gestures to the larger press that lies flat on a countertop, “is called a show card sign press. I bought it from a Sears store in Wisconsin. It’s from about the 1950s when they used to print their own sales advertisements.”

She demonstrates, sliding the roller over a collection of wooden letters. “Voilá!” she says, holding the card up for inspection. 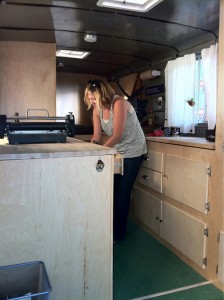 On the other countertop there is a much older and smaller printing press made of what appears to be cast iron. It’s a Golding Official No. 3 made in 1873 and it’s as intimidating as it is solid. It sits upright and its pitched, circular collar glistens with Durrie’s printers’ ink. On a clear plastic pallet two thick puddles of blue and red ink, freshly poured, wait next to their respective jars. Durrie takes a portion of the blue ink and lays it on the collar. She engages the machine’s lever. Three rollers move ink from the collar to the letters as the machine presses paper to metal, and for a moment a look of excitement flashes over the group to the sound of the ratcheting machine, as if anticipating a jackpot from a casino slot machine.

Durrie holds up her tiny card and passes it around. They are amused, but are not quite ready to purchase any of her prints.

As her guests leave, they take one last look at her cozy studio, the road map of her trans-American odyssey, and a sign above the driver’s seat that reads, “WOMEN’S WORK.”  The exiting customers catch the eye of a few others who stretch their necks through the passenger side door before climbing aboard. “I’m going to Michigan next,” she explains to one lingering man, pointing to her map. “Then Buffalo and New York City.”

One woman picks up a card next to a large red and blue sign on the side of the truck that reads, “I PREFER CHICAGO,” with some historical figure pictured. “Look at this one,” she laughs, picking up a card with a little black bat on it. “Bat Shit Crazy For You. That’s great.” (Giovanni Wrobel)