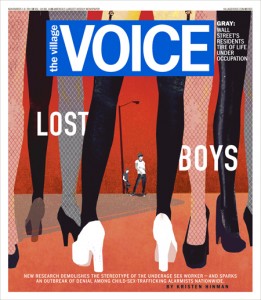 Like just about everyone of a certain age who got into the alternative newspaper racket, I found my inspiration from the Village Voice. I’d moved to New York in my early twenties for a Wall Street training program and, though then far to the right of its political sensibilities, found VV’s untidy collection of powerful voices irresistible. Its writers not only took on the powerful (“New York’s Worst Landlords”) but also each other, in its letters column, which often made for the liveliest reading in the paper. After its founding by Norman Mailer and a couple of his pals, it went through a series of owners, including Clay Felker and Leonard Stern; even Rupert Murdoch, who counted among them, could not tame this unruly publication.

As billionaires seem to have a knack to do, Stern sold the paper, along with several others he collected around the country, at the peak of the market in early 2000 to an investor group. With the media economy soon in free fall, things did not go well for the new buyer, and before long, New Times, a Phoenix, Arizona-based group of alt weeklies led by Jim Larkin and Mike Lacey, had merged the two companies, forming the national powerhouse the two rival chains had long coveted.

Needless to say, the decade has not been kind to media overlords of any stripe. I visited New York last fall and was disheartened by what had become of the Voice. Sure, we’re all suffering a major loss of page count, but the new bosses in New York have done what their detractors had long feared: they’d applied the cookie-cutter New Times model of an alternative newspaper to the grandaddy of them all. Gone were the vigorous, anarchic voices that made up the columns and news section of the paper, diminished were the lively arts pages that covered theater, art-house cinema and dance with the import of the nation’s cultural capital. In their place? Apolitical iconoclasm and extensive restaurant listings, markers of a New Times paper. And, as a misfortune of timing would have it, a cover “story” that served to defend the corporate parent, and its Backpage.com operation, against the growing cries that it facilitates child prostitution in this country. (More on that in a minute.) To compound the ailment, I traveled directly from New York to Los Angeles, where the once-proud LA Weekly also flies the now-christened Village Voice Media (VVM) banner. Its cover story? “Lost Boys: New research demolishes the stereotype of the underage sex worker—and sparks an outbreak of denial among child-sex-trafficking alarmists nationwide”; the same work of corporate shilling that graced the Voice. Astonishing.

Let us acknowledge that the New Times folks have a long tradition of some fine muckraking in their papers; from their investigation of the Rocky Flats nuclear weapons plant near Denver to their ongoing contretemps with Sheriff Joe Arpaio in Arizona. With many of the midsize-market papers they bought, they greatly upgraded the funding and practice of journalism with their arrival. Our disdain for their approach is in its absolute commitment to conformity. The Village Voice, once a part of the “only in New York” fabric that defines its city, is now just another New Times paper that could be anywhere.

Let us also make note of local connections and personal conflicts. VVM is usually the first player mentioned in the impending acquisition of the Reader, though I suspect finances prevent it or it would have been done by now. The Reader’s sister paper, Creative Loafing, though not apparently the Reader itself, is an affiliate of Backpage.com. And, among its many operations, VVM owns a national-advertising network that represents the Chicago Reader, in competition with the advertising cooperative that represents Newcity. Though unlikely, the Reader might suffer if the advertising boycott being organized against its partner grows teeth.

Why a boycott? Well,whether merited or not, the flag-bearer of our industry has sadly become the face of evil in the fight against child prostitution. VVM operates Backpage.com, an online classifieds site in the Craigslist vein. And when Craigslist exited the “adult” advertising business under political pressure in 2010, Backpage became the default carrier. It also became the default target of the pressure that Craigslist had sidestepped. In the March 18 New York Times, Nicholas Kristof wrote a column on the front page of the Sunday Review section about Backpage and child prostitution, noting that forty-eight state’s attorney generals have called on the company to exit the adult advertising business, and that seventy percent of all prostitution advertising is found on their site. He called for an advertising boycott, writing: “About 100 advertisers have dropped Rush Limbaugh’s radio show because of his demeaning remarks about women. Isn’t it infinitely more insulting to provide a forum for the sale of women and girls?” VVM has been fighting back in its pages, most recently in an unsigned response to Kristof’s column.

VVM’s defensive strategy—note that these journalists are spending their lives defending themselves against accusations of pimping children!—is largely two-pronged. First, they attack the veracity of reporting on the subject in other media by looking for what they perceive as inaccuracies. In addition, they channel their journalistic resources in self-defense, like the aforementioned “Lost Boys” story which appears to have run chain-wide that week in November. Journalism that challenges the status quo thinking on a subject is usually the stuff of admiration, but here it just feels cheap and dirty. Even Murdoch kept his hands off the Village Voice.

The second strategic prong is to point out, correctly, that the Village Voice in print, along with nearly all alt weeklies including Newcity, has long published adult advertising and thus imply it is hypocritical to find fault with doing so online. It is true that sex ads have long been identified with alts in America. The argument was that, for a long time in this country, sexuality away from the norm, including homosexuality, was demonized, and that these ads served a form of free expression that would be otherwise suppressed. Of course, the expression was free but the ads weren’t. Papers routinely charged adult advertisers premium rates of at least double that paid by others. The rationale for doing so sprang from a desire to contain the amount of visual attention they commanded and its detraction from other big-ticket “wholesome” advertisers, but really was a function of a limited marketplace; we up-charged because we could.

When the internet emerged in the nineties, Newcity was an active player on both a local and national level and we gave much consideration to ways to transfer what we did in print to the emerging digital realm. As such, we decided to stay out of the adult business online. Why? In print, we openly bore the consequences of our decision to accept these ads. They were attached to our journalism and design. Online, it was clear that they would be detached, in the form of adult sites, or things like Craigslist and Backpage, from the journalism they funded. Honestly, it felt too much like getting into the adult business itself, not far removed from being a pimp or pornographer.

This battle being waged by VVM bears out my original sentiments. So why would Larkin and Lacey stake the legacy of a mighty journalism enterprise on the backs, literally, of children? They’re addicted to the crack cocaine of alt journalism, that is, adult advertising, to the tune of twenty-two million dollars a year, according to reports. Given my understanding about the general state of affairs, if not the specifics here, I suspect they don’t have a choice: to exit the business would force an exit from all business. So, even Wall Street draws the line at whoring out the children. It has VVM do it for them.

We are in a time of experimentation when it comes to funding journalism, with several nonprofit models getting the most attention. No doubt, this particular approach is certainly, um, singular. Lacey and Larkin once went to jail for journalism; let’s hope they don’t go to hell for child prostitution. If they do, I fear Norman Mailer will kick their ass.

Longtime Chicago journalist and author Norman Mark passed away recently in California at the age of 72. In Newcity’s earliest days, then-senior-editor Nate Lee cooked up a brilliant house ad campaign to peddle the new t-shirts we’d had made. Since we were too new and unknown to have any famous fans, we’d use our ads to tell people what we were not.  A then-high-profile broadcast presence in Chicago, Mark was an early mark for the campaign. “Norman Mark does NOT wear a Newcity t-shirt” went the tagline. What I did not imagine was that Mark would see it and call me up, asking me why we were saying that about him and what it meant. Hazy memory erases the details, but I’m pretty sure that I did NOT tell him that, for us, he epitomized uncoolness. Especially since he was pretty cool on the phone. We sent him a t-shirt.